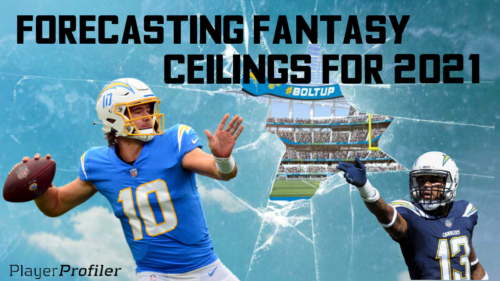 Many fantasy rankings use models to create a median projection for fantasy players. But what if we just went off the best case scenario when devising a set of rankings, which could be particularly useful in these best ball tournaments where the results don’t matter all that much unless you’re able to secure the overall top spot? Let’s use PlayerProfiler.com’s advanced stats, metrics, and analytics, and a little bit of forecasting, to see what ceiling cases we can consider for the upcoming season. This edition will focus on quarterbacks, with other positions to come.

The first five or six quarterbacks off the board are usually the same. That list includes Patrick Mahomes, Josh Allen, Kyler Murray, Lamar Jackson, and Justin Herbert. And I don’t think you can go wrong with selecting any of these studs as your QB1. But let’s do some prognostication and sort through these players by their absolute ceiling.

I see no need to get too contrarian out of the gate. Patrick Mahomes is the best football player on Earth, and he enters his fourth full year as a starter with an intact offensive line (albeit without Eric Fisher) and his rock-steady WR1 and TE1. This year will put more pressure on Tyreek Hill and Travis Kelce to perform than ever before. Sammy Watkins is gone, and snakebitten as he was with injuries (and inefficient play), the two top options for Mahomes will have as much attention (from both defenses and their QB) than ever before. Both players are so great that I don’t see that as a negative.

Most Money Throws since 2018

Andy Reid is smart, Mahomes is infinitely creative and mobile, and the door is open for a secondary pass-catcher like Mecole Hardman or even newcomer Cornell Powell to become a steady contributor. Mahomes has never had a steady contributor emerge as a third option. And don’t forget about Clyde Edwards-Helaire, a prolific receiver in college who will be without receiving competition out of the backfield, since now-Chicago Bear Damien Williams had been utilized much more as a receiver than Darrel Williams. I don’t see a world in which a Mahomes ceiling year is anything less than QB1. The guy threw 50 touchdowns as a 23-year-old. Next question.

In my mind, if anybody can take the top spot from Patrick Mahomes, it’s Josh Allen. Of course, he already did outdo Mahomes last year in overall fantasy points, and he now has another offseason of rapport-building with Stefon Diggs, who finished as the WR3 himself. John Brown is gone, meaning sophomore Gabriel Davis will see the field even more now, coming off a 17.1 (No. 7 among qualified wide receivers) yards per reception rookie season. Buffalo also invested absolutely nothing into an already anemic run game in the NFL Draft and free agency period. It’s all coming up Allen.

I wrote after the season that in hindsight, we were foolish to downplay the boost to Allen’s production that the arrival of an athletic phenom like Diggs would bring. Allen is a gamer and Diggs is a gamer. The fact that Allen will never give up on a play and is willing to push the ball down to a player like Diggs meshed better than anyone expected, and I expect that connection to blossom even more this next season. Allen and his squad will contend as AFC champions and this offense is primed to fire yet again.

Call me crazy: the 2019 NFL MVP might be undervalued. Over the offseason, the Ravens cut old fogey Mark Ingram, added Rashod Bateman in the first round of the NFL Draft (whose Best Comparable Player is Stefon Diggs, by the way), drafted Tylan Wallace in the fourth round, and added Sammy Watkins in free agency. Greg Roman also said that the passing offense would expand in 2021.

What Lamar Jackson will we see in 2021? 🚀 pic.twitter.com/e3VuHIPFKP

That’s a breath of fresh air for fantasy gamers and for Lamar Jackson, who publicly stated that he felt defenses were getting wise to the team’s playcalling last season, which was run-heavy as usual. Jackson will have the most stocked receiving group he’s ever had, is continuing to develop as a passer, and he’s already the best rushing QB of all time. Let’s not overthink. Teams like the Bills and the Ravens build around the strengths of their stars, and developing Jackson will be the number one goal for this forward-thinking team this season. Jackson is somehow a value in drafts right now.

I honestly think Justin Herbert could have a better year than Kyler Murray this season. That being said, rushing production is too valuable to overlook, and Murray has rushing upside to a degree Herbert just doesn’t have.

The top 10 QBs in 2020 rushed for about 250 yards on average more than the second group of QBs, and that’s with Tom Brady chipping in a measly three yards on the ground. And the rushing yards don’t even tell the whole story. In most leagues, a passing touchdown is worth four points, while rushing or receiving scores are worth six. Every time your mobile QB runs one in, it’s just capitalizing even more on their boost in value. Add that to Arizona bringing in Rondale Moore, a ceiling-unlocker if there ever was one, and Murray looks set to continue on the success he’s had both on the ground and through the air this season.

Who do YOU see leading the Cardinals in Rushing this year? 👀

By the way, the previous chart also reinforces just how electric Lamar Jackson is under center. These speedy QBs have broken fantasy football and they will only develop further as passers with increased time and energy put into their craft and in teams’ efforts to fill the receiver rooms around them.

I don’t have any exposures higher than Justin Herbert so far in best ball. They’ve got a new head coach that’s far from archaic Anthony Lynn, a new OC in Joe Lombardi that helped Drew Brees average well over 600 pass attempts every year for a decade, and a fully-stocked receiving group. Oh, and the team addressed their biggest concern with a cornerstone offensive lineman in Rashawn Slater last month.

In 2020, Herbert recorded 4,369 (No. 8) Air Yards with 2,091 (No. 13) Completed Air Yards. That level of fearlessness to push the ball downfield is invaluable as a fantasy passer. Herbert had 80 (No. 9) red zone attempts, throwing 20 touchdowns to just one pick from inside the 20, and 10 scores with zero picks from inside then 10-yard line. He also cashed in for scores on five of his 20 red zone carries, both marks ranking in the top six.

Justin Herbert was on another level in 2020 😳 pic.twitter.com/VU4CsG266V

I’m drinking the Chargers hype Kool-Aid, and I am fully ready to get hurt again when the mystifying injury luck begins to plague the team as it does every year. But in terms of ceiling? I can’t be any more in on Herbert. The loss of Hunter Henry is alleviated with Jared Cook and Donald Parham, and adding Josh Palmer to Keenan Allen, Austin Ekeler, Mike Williams, and Jalen Guyton just fuels the bulls case fire.