The San Die… The Los Angeles Chargers and Cincinnati Bengals last played in the season opener of 2020. it was a lackluster 16-13 game. This was Joe Burrow‘s debut. Meanwhile Justin Herbert hadn’t yet gotten the opportunity to lead the Chargers onto the field. Both teams have clearly improved since this game. We also get two of the top fantasy running backs in the league this year with Joe Mixon (No. 3) and Austin Ekeler (No. 2) in fantasy points.

This game opened with the highest total of the week at 50.5 and has moved to 49.5. This game merits investigation to see if it is truly the game of the week as we search for the fantasy holy grail. A shootout.

The Chargers would be in the playoffs if the season ended today. In their last three games, they lost to the surging Vikings (47 points scored), bounced back to take down the Steelers in an explosive 78-point game, and finally last week they lost 28-13 as 3.5-point favorites to the division rival Broncos. Their offense runs through a concentrated pool of Austin Ekeler, Keenan Allen, Mike Williams, and to a lesser degree, Jared Cook. They will be up against a Bengals defense that is average with a DVOA of No. 16 overall. Of the two units, the Bengals run defense is stouter, clocking in at No. 9 in run defense DVOA. The passing game will be the easier route for the Chargers here. This plays to their strength as they are attempting 39.9 (No. 3) Team Pass Plays per Game.

Along with two of the top three running backs in the league, we get two of the top young quarterbacks as well. Justin Herbert ranks No. 1 among qualified quarterbacks in QBR, No. 2 in Expected Points Added, and No. 4 in PFF’s Offensive Quarterback grade at 85.8.

It will be difficult for Austin Ekeler to get going on the ground this week, but he is one of the best pass-catching backs in the league. He has 473 receiving yards so far this year, No. 2 only to the hybrid joker Cordarrelle Patterson. He has the most receiving TD’s for an RB at 7. He’s getting the opportunity in the receiving game with 23.4 (No. 2) Routes Run per game and 6 (No. 3) Targets per game. The Bengals also give up the most pass attempts to running backs in the league at 9.8 per game, so things line up well for Ekeler in the receiving game here. 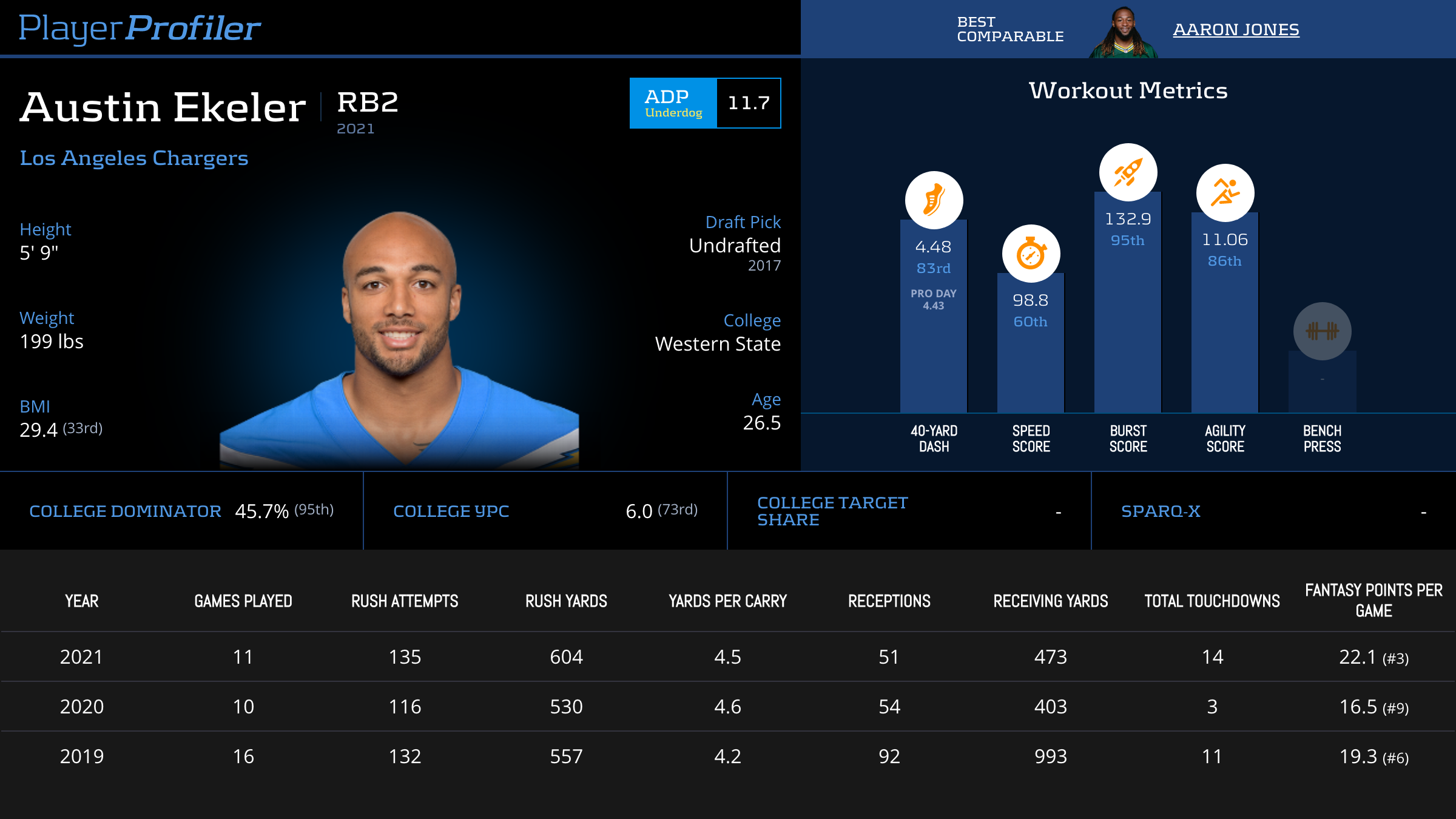 Ekeler’s stellar receiving work adds to Herbert’s upside and why he grades out as one of the top QB’s of the week.

The issue with Allen is his ceiling is capped by a low 8.7 (No. 77) Average Target Distance and only two (No. 56) total TDs this year. The opportunity is there with 10.5 (No. 3) Targets per game and 37.1 (No. 3) Routes Run per game. He’s a solid play nearly every week for cash, but he is lacking that explosive upside we like in tournaments.

Mike Williams still hasn’t produced the way he did early in the season when his role was the X-Receiver. There are really no identifiable trends since the unexplainable role change that can help us predict his production in this one.

His overall numbers look good with 744 (No. 17) receiving yards and 7 (No. 8) total TDs, but four of his five 20-point fantasy games came in the first five weeks of the season. He has single-digit fantasy points in the other six games, making him the living, breathing embodiment of boom or bust.

The Bengals are coming off of a 41-10 drumming of their divisional rival Pittsburgh Steelers. Things seem to be truly looking up for the Bengals. Ja’Marr Chase has been a rookie sensation although he has come back to earth the last few games. Joe Mixon has emerged as one of the top running backs in the league. It has been a war of attrition at the top of the running back ranks this year, but Mixon is arguably only behind King Jonathan Taylor. The easiest path to victory against the Chargers is on the ground. Their run defense is dead last in DVOA at No. 32 overall. The Bengals have offensive weapons at all of the skill positions, so they do have the ability to pick their method of attack. In this one, I believe that they will continue to lean on Mixon to get the job done

As you might have guessed, Joe Mixon is my top play in this game and one of the top plays on the slate. Mixon has had 62 touches in the last two games, and considering the matchup, it makes sense for the Bengals to continue to feed him in this one. What I really like to see is Mixon also checks the boxes for having the upside we want from our running backs, showing he is capable of taking advantage of a soft matchup. Evidenced by his 11 (No. 3) Breakaway Runs, 68 (No. 4) Evaded Tackles, 610 (No. 5) Yards Created, and 9 (No. 4) Goal Line Carries.

As for the Passing game, Joe Burrow is No. 3 overall among qualified quarterbacks in PFFs Offensive QB Grades, but his QBR of 51.3 is in the middle of the pack at No. 15.

Although I’m partial to any stat on PlayerProifler.com (I’ve used it for years before writing here), I truly believe the QBR here for Burrow is closer to reality than the PFF Grade. Burrow is a fine quarterback, but given the great running matchup and the solid pass defense of the Chargers (No. 11 in pass defense DVOA), he is a fade for me.

I’m not altogether out on the pass-catchers here though.

The receiving corps for the Bengals is spread out, with Ja’Marr Chase, Tee Higgins, Tyler Boyd, and C.J. Uzomah all as viable targets each week. Higgins finally had some positive regression last week and got in the end zone with a 6-114-1 stat line. Boyd is the one I like the least here and I will not be using him in any format. Chase is a top 10 WR in this league and can get it done in any week. He literally has a top 10 rating in every one of these efficiency metrics.

Chase has that ceiling ability we’ve been talking about with 18.1 (No. 6) Yards Per Reception. He also has the opportunity with a monstrous 41.6-percent (No. 4) Air Yards Share. My other target would be Uzomah. He catches the ball when targeted with an 88.2-percent (No. 1) Catch Rate, and is relatively efficient with a +26.0 (No. 1) Production Premium.

He may also have encountered a UFO.

Saw this flying in the sky just now…any thoughts as to what the heck this is? Disappeared shortly after 👀🧐🤔 pic.twitter.com/ZJSiWbuMQi

Even if he doesn’t have any supernatural powers after this encounter, the Charger’s DVOA vs TE is No. 30, and they are giving up 16.8 (No. 4) Fantasy Points per Game to tight ends, so that should be enough to suffice.

I lean the Bengals here in what should be a closely contested game. In a close game, an advantage the Bengals have is special teams. The Chargers rank dead last in PFF Special Teams Grade, while the Bengals have a 91.2 (No. 2) Grade. I like Joe Mixon to get going early and often and continue his ascent into the elite tier of fantasy running backs. A strong running game can put a bit of a damper on a shootout, but I still think a decent amount of points are scored in this one.

For the Chargers, all roads lead to Justin Herbert as the best play here. He can be paired with Austin Ekeler, Keenan Allen, or Mike Williams, with Ekeler being my favorite. Finally, to answer our original question. I don’t think this is a slam dunk shootout and this wouldn’t be the first place I would go for a game stack.

Skinny stacks with Justin Herbert and one pass-catcher or Austin Ekeler.

Joe Mixon, Keenan Allen, and hit up the Optimizer. Josh Larky has been making constant improvements.

It is worth noting that ownership is going to flow to Joe Mixon. These are two teams that have good or even great skill position players. The quarterbacks are also capable of putting up ceiling games. Add on the fact the defenses are not elite in any facet of the game and in a larger field GPP, you could get some very nice leverage on the field by playing for a shootout and fading Mixon. As I’ve said throughout the article, I don’t think this is the most likely path, but it does have more potential to happen than the average game would.