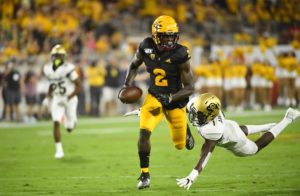 Brandon Aiyuk measured in smaller and ran slightly slower than expected at the NFL Combine, but still landed a 98.6 (65th-percentile among qualified wide receivers) Speed Score while running a 4.50 (67th-percentile) 40-yard dash. He displayed elite explosiveness with a 40.0-inch Vertical Jump and a 128.0-inch Broad Jump. That translates to a 132.0 (92nd-percentile) Burst Score.

Aiyuk projects as a Day 2 pick and some mocks even have him going in the first round. His age-adjusted production profile is a concern, but his yards after the catch ability and explosiveness in the return game will help him have an early impact at the NFL level, even if it means he won’t be immediately useful in fantasy. His long-term upside is as a WR3–or a WR2 on a thin depth chart. Draft him in the late second or third round of rookie drafts. 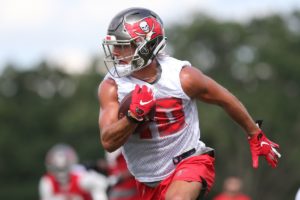 Scott Miller is the young Bucs receiver we want to prioritize in dynasty leagues (here’s looking at you, Justin Watson), especially with Breshad Perriman entering free agency this summer. Miller is entering his second year versus Watson’s third. Miller is also more than a year younger than Watson, has a better 19.1 (88th-percentile among qualified wide receivers) Breakout Age and a massive 18.4 ATD in his rookie year. Did I mention that his best comparable on PlayerProfiler is Tyler Lockett?

Jakobi Meyers, a much cheaper alternative to N’Keal Harry, sported an 8.5 yards per target on a respectable 41 targets and a strong 50.8-percent Slot Rate. He performs well enough in the remaining metrics, with an around sample-average weight at 203 pounds, 20.8 (42nd-percentile) Breakout Age and 10.5 Average Target Distance to jump out in my model. 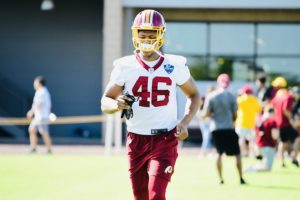 XFL Honors and Improvements for 2021

Saeed Blacknall dropped a 3-78 line on seven targets in Week 5, his best outing of the short-lived season. He owns an elite 110.5 (91st-percentile among qualified wide receivers) Speed Score but never broke out while playing at a Penn State. He backed that speed up on the field with an absurd 20.1 yards per reception. He was Henry Ruggs before not having a breakout was cool.

Sammie Coates is the XFL’s Dwayne of the Week, an award named after Dwayne Bowe and his ability to underperform expectations and his own athletic ability. Houston’s offense required receivers to read defenses and exploit holes in their coverage. It placed loads of responsibility on them, but rewarded those who understood what they were seeing. Coates has proven once and for all that his only asset is athleticism and that isn’t enough to make a living even in the XFL. 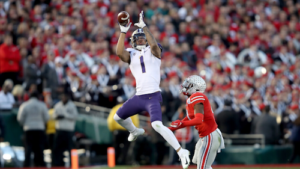 Hunter Bryant’s path to NFL production is as a move tight end, to be utilized in the passing game. His college production tells us this tale. In his first two seasons with Washington, he reeled in 33 of his 39 targets (84.6-percent) for 569 yards and two touchdowns. In his breakout 2019 season, at the age of 20 (82nd-percentile among qualified tight ends), he showed that he can handle a larger workload and be productive. Although his efficiency did dip a tad, as evidenced by his 63.4 percent Catch Rate.

Bryant is one of the younger players in this draft class. Research has told us that tight ends who play their rookie season at 21-years old have a high chance of producing as top-12 fantasy performers in their careers. He’s a player that may well be worth a late-round rookie selection or free agent pick up. Unless your league awards fantasy points for run blocking clearly, in which case, steer clear. 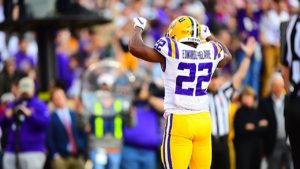 Clyde Edwards-Helaire dominated the backfield touches for arguably the best offense college football has ever seen, compiling 1,414 yards rushing and 453 yards receiving on 55 receptions. He found the end zone 17 times as well. Since 2000, only seven other Power-5 conference runners have topped 1,400 yards rushing and 450 yards receiving in a season. Despite his impressive raw statistics, he finished his college career with a 18.3-percent (27th-percentile among qualified running backs).

We knew CEH was small. At the Combine, he ended up weighing in the satellite-back-plus range at 207-pounds. He posted a mediocre Speed Score combined with an impressive Burst Score, but also boasts a 19.4 (74th-percentile) Breakout Age and a 50-reception season for a National Championship team. As an early entrant who will still be 20 years old when he is selected in April, Edwards-Helaire projects as a Day-2 pick in the NFL Draft and is cemented in the Top-10 of PlayerProfiler’s Rookie Rankings. 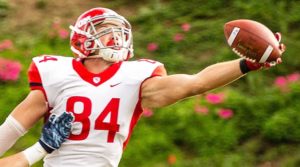 The 2020 tight end crop is not top-heavy with talent, but there are a few intriguing prospects. None more so than Adam Trautman. He boasts a 38.1-percent (97th-percentile among qualified tight ends) College Dominator Rating. These numbers are buoyed by a truly dominant final year in 2019, where he reeled in 70 receptions for 916 yards. He also scored 14 touchdowns after scoring 17 in total during his first three seasons.

Trautman had a decent outing at the NFL Scouting Combine but didn’t melt any faces. His 4.80 (46th-percentile) 40-yard dash was 13th out of 17 tight end attendees. One area in which he did excel was in the 3-cone, where he paced all comers with a 6.78 time. This, coupled with a 4.27 short shuttle, gives him an 11.05 Agility Score. That earned him a place in the 95th-percentile at the position. 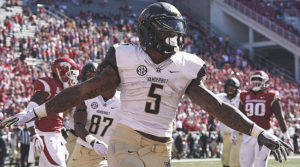 Ke’Shawn Vaughn accounts for all of the metrics needed to be a bell cow back at the next level: a high Body Mass Index (BMI), an upper-percentile Speed Score, an excellent College Dominator Rating and a high College Target Share. Of course, players don’t thrive on these numbers alone at the running back position. We need to see high draft capital and an ideal situation. His Combine numbers should flash for potential NFL suitors. He can be a three-down back in the right landing spot.

On a bad Vanderbilt team, Vaughn was the guy. Even with defenses keying in on his talents, he was still able to rush for 2,272 yards on the ground. Impressive when considering Vanderbilt ranked No. 123 in offensive yards per game in 2019. It’s also important to note his 10.0-percent (74th-percentile) College Target Share to show off his unique versatility. His 28-catch senior season bested the final-season outputs posted by top prospects Jonathan Taylor (26) and D’Andre Swift (24).

Justin Herbert flashed success as an 18-year-old freshman at the helm of the Oregon offense. He completed 63.5 percent of his pass attempts at 7.6 yards per attempt in eight games. He followed up that season with an impressive sophomore campaign, showcasing his accuracy (67.5 completion percentage), efficiency (9.6 YPA), and rushing ability (183 yards, five scores). His season was cut short with a collarbone injury, but that was just a glimpse at what he can bring to the next level.

At 6-6, 236-pounds, Herbert has prototypical NFL size that general managers salivate at. He stole the show in the athletic testing at the Combine, running a 4.68 (84th-percentile among qualified quarterbacks) 40-yard dash while adding a 123.6 (91st-percentile) Burst Score. This shouldn’t have been all that surprising after he ran for 560 yards and 13 touchdowns during his college career. Still, it confirms that he has an extra dynamic element to his game that few QBs possess.

D’Andre Swift looks like a bigger, faster, stronger version of Miles Sanders. J.K. Dobbins has real red flags keeping him out of the top-3 running back prospects.

Cam Akers and Ke’Shawn Vaughn deserve extra credit for producing big numbers on anemic college offenses. Antonio Gibson is the ultimate upside play in the second round of rookie drafts. 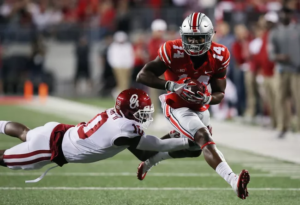 K.J. Hill is next in the line of Ohio State wide receivers to try and prove that he can beat the odds of having a less than impressive collegiate profile. Hill was a four-star prospect coming out of high school but chose to go to a college loaded with NFL-bound wide receiver talent. Because of this, he was never able to record a breakout season. He may have had more competition for targets than most receivers, but his non-breakout status is damning.

Everything has to fall in place perfectly for Hill to ever make a useful fantasy impact. He needs a team to relinquish their entire load of slot snaps to him because he doesn’t have the athleticism to win on the outside. His quarterback has to be willing to pepper him with targets and he needs to secure them, because he doesn’t figure to be a YAC monster or avid touchdown scorer.