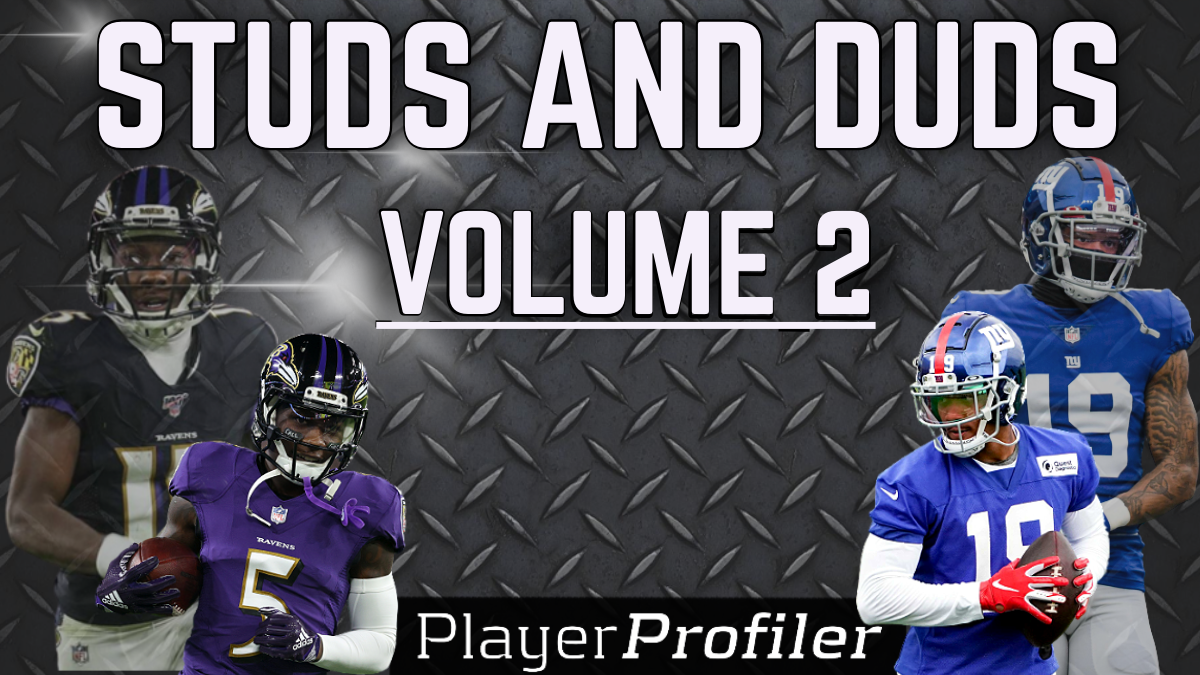 Marquise Brown and Kenny Golladay fooled about every fantasy football manager in 2021. For the sake of being honest with ourselves and trying to improve our process, we’re taking a look at these two receivers – one stud and one dud – to determine what went wrong. 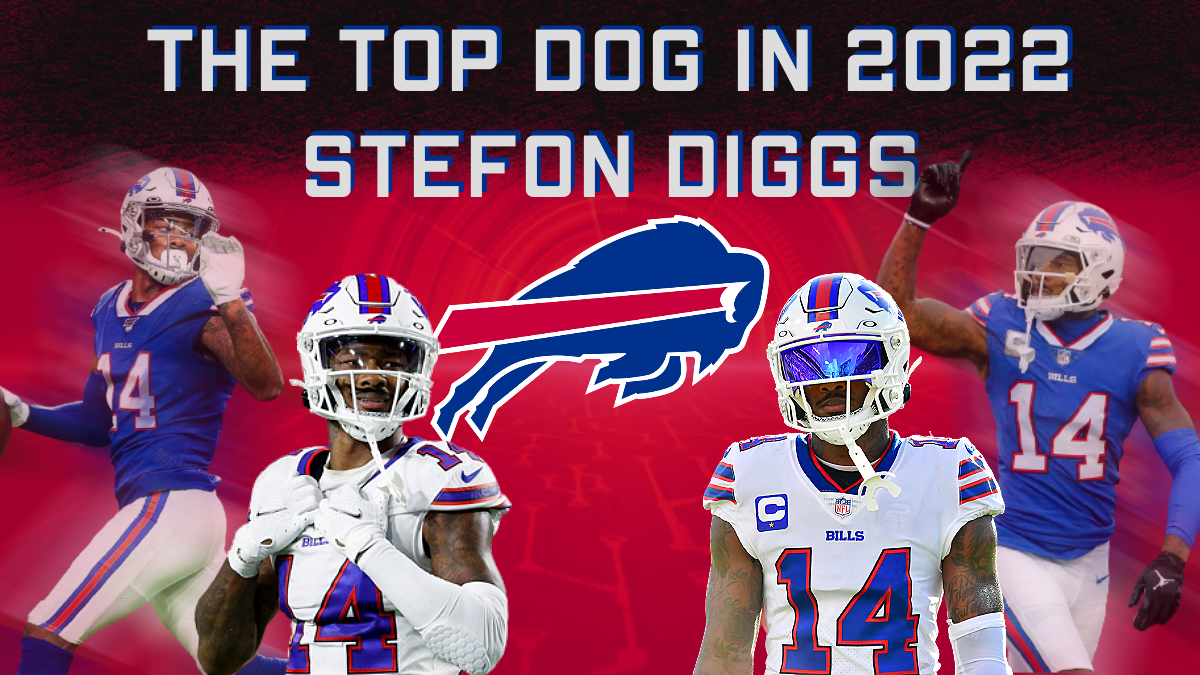 Finding the Next WR1 in Fantasy Football: Stefon Diggs

Stefon Diggs has had back-to-back seasons of 160+ targets and 100+ catches. Back-to-back seasons with 1,225+ yards and 8+ touchdowns. His quarterback is Josh Allen and he plays in one of the most pass-heavy offenses in the NFL. The lack of target competition in Buffalo, combined with his role in the Bills’ offense will result in Stefon Diggs being this year’s No. 1 fantasy receiver. 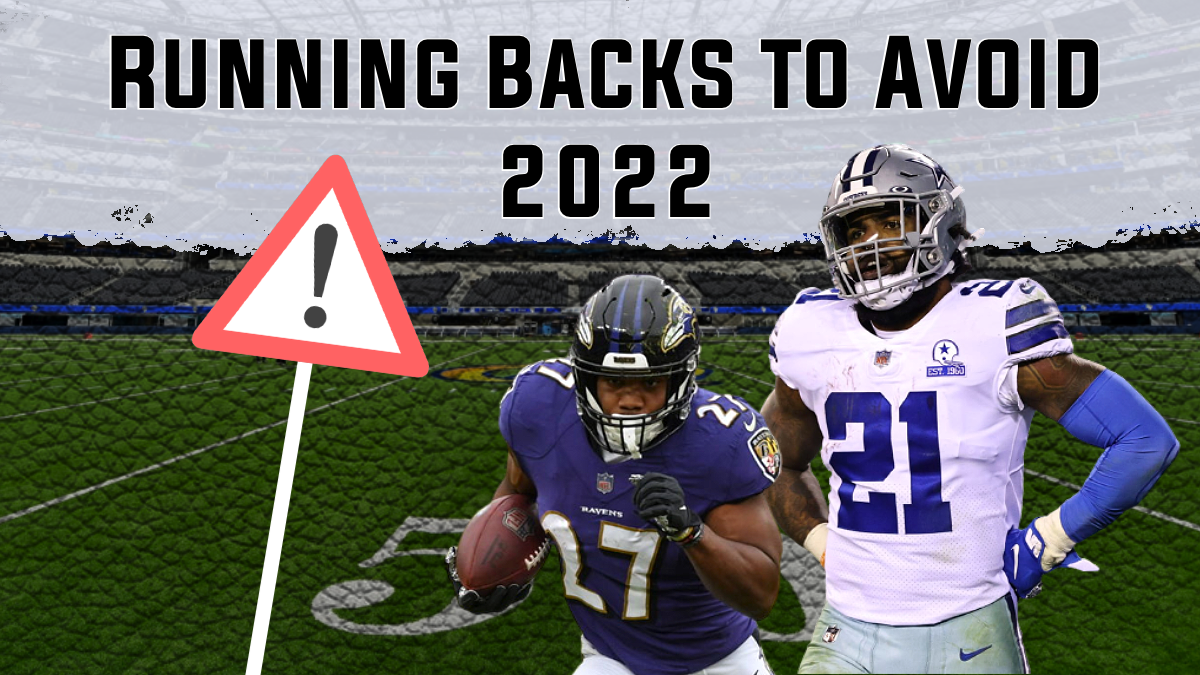 If you’re reading this I’m sure you’ve had a disappointing season from one of your fantasy players that you either drafted early or paid handsomely for in a trade. For me, after not being able to get my hands on Christian McCaffrey for 3 years I finally received the 1.01 in one of my redraft leagues in 2020. Of course, once I finally got him he battled injuries all year and only played in 3 games. Another example would be Mike Davis last season who was picked up by many with the expectation he would be the Falcons starting running back. Unfortunately for Davis and his fantasy owners, Cordarrelle Patterson was finally allowed to truly showcase his talents and took hold of the most productive carries. In no particular order, here are 5 running backs to avoid as they have some valid red flags that may lead to disappointment in 2022. 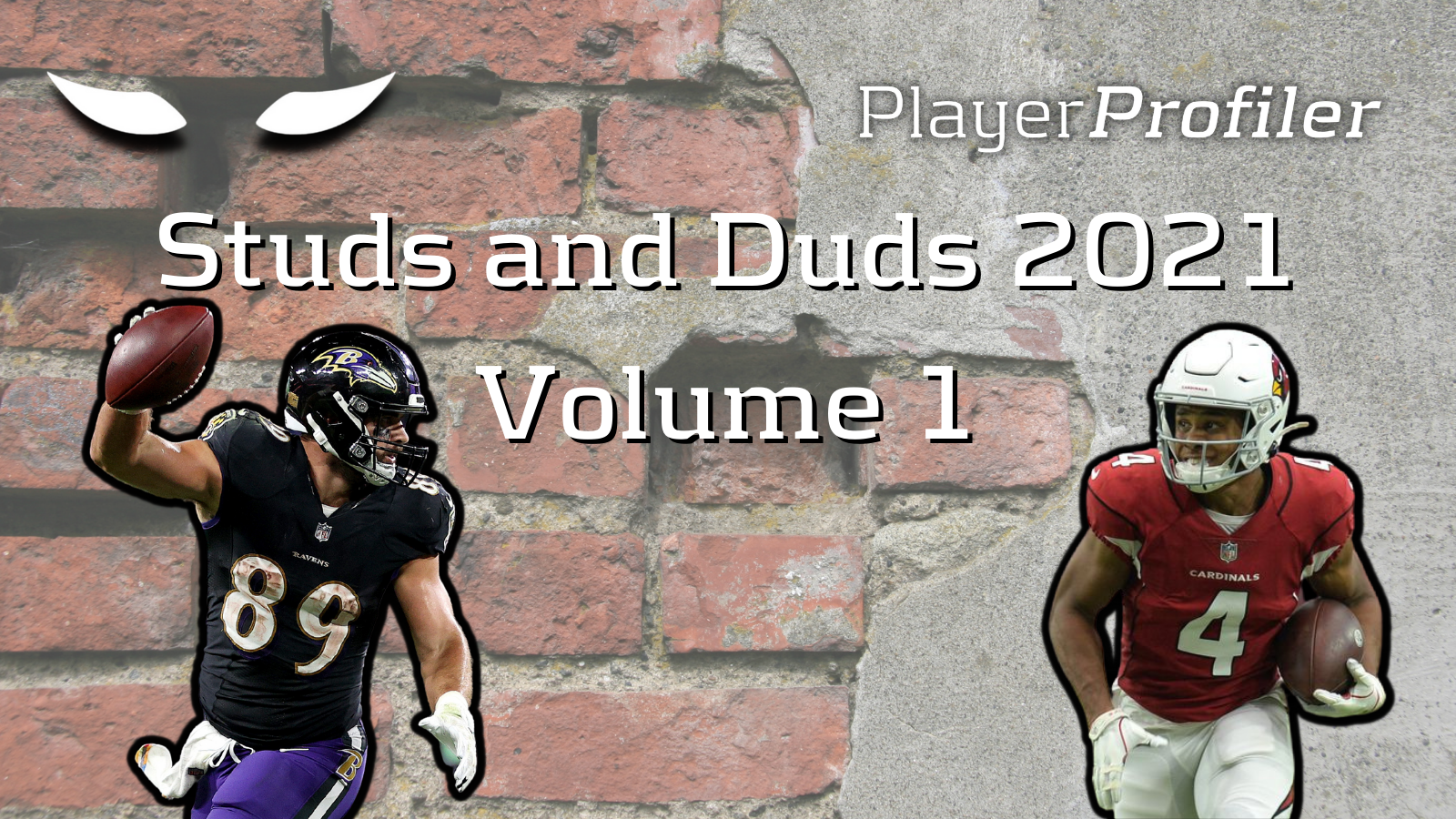 I saw Mark Andrews as an efficient target hog who operates down the field with a top-five fantasy finish already on his resume. Looking back, I regret not pounding the table for him more. However, we can’t simply ignore the effects of preseason injuries to J.K. Dobbins and Gus Edwards that certainly influenced Baltimore to air out the football more often.

Rondale Moore was barely old enough to vote and produced 1,471 yards of offense. I’m far from a film grinder, but his freshman tape is beyond impressive. I learned not to buy into purely the landing spot and especially not to obsess over coach-centric analysis. I already knew better than that, but I fell into the trap anyway. No matter what I believed about Moore, his 9.4 (1st-percentile among qualified wide receivers) College Yards Per Reception should’ve been a red flag. 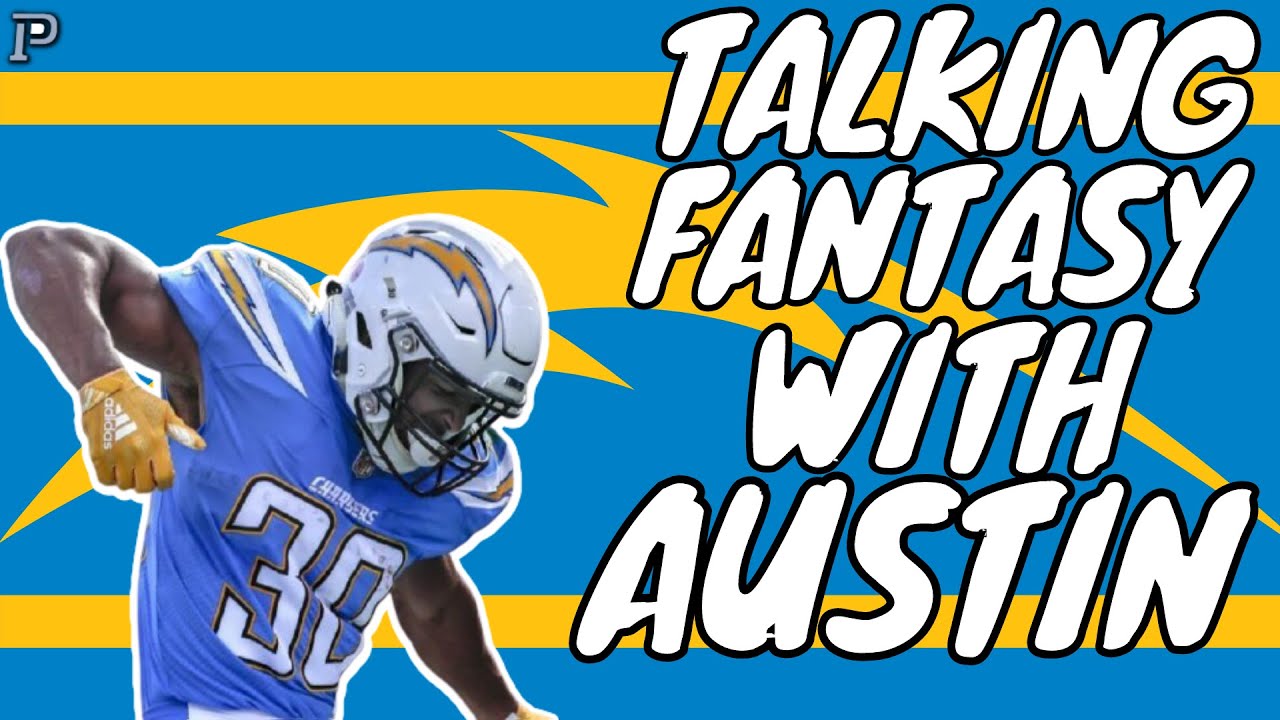 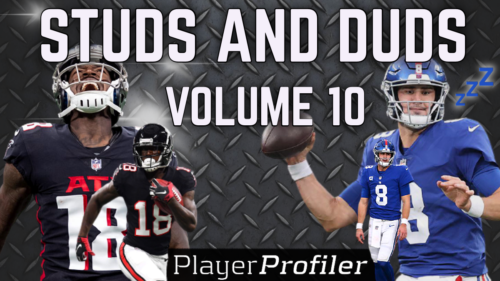 Calvin Ridley’s breakout coincides with his opportunity. The Falcons currently have Julio Jones coming back healthy and have spent significant draft capital on superstar tight end prospect Kyle Pitts. Last year was the Calvin Ridley show, this year would be a competition for targets should Jones stay. Right now, I have a hard time taking him over guys like Keenan Allen or Michael Thomas who are currently going behind him.

Second-year quarterbacks don’t always improve on their first season. While Daniel Jones did show incredible rushing value, I should’ve known better that his decision-making was not all there yet. All of his advanced metrics were in the bottom half of the league among qualified quarterbacks. Lowlighted by 38 (No. 5) Danger Plays (No. 2), a 79.0 (No. 2) True Passer Rating, and a 7.2 (No. 24) Accuracy Rating. Sigh… 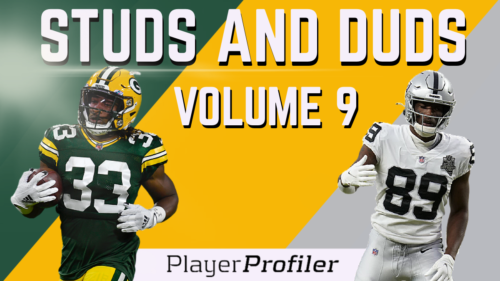 Avoid narratives that do not align with the data. In 2020, Aaron Jones’s opportunity was similar to what he saw in 2019, other than the total touchdowns. The goal of fantasy football is to score fantasy points. Players need opportunity to score fantasy points. Raw skills alone will not get the job done. When a running back is in their prime, coming off of an incredibly productive season with 217.9 (No. 9 among qualified running backs) Weighted Opportunities, I am interested in having them on my roster.

I like big receivers and I cannot lie: At 6-3 and 212 pounds, I figured Bryan Edwards would be that outside alpha receiver that would be productive in recording first downs, having screens thrown to him, and being a red zone threat with his size. Given his young Breakout Age, and doing in the SEC in college, I thought he would be able to step in as a rookie and have a nice season. 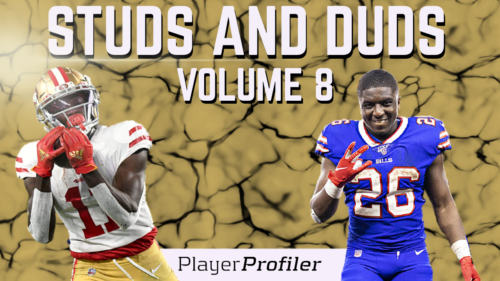 Look for offensive fit and/or a unique opportunity when evaluating a rookie’s fantasy outlook. Brandon Aiyuk’s game is similar to Deebo Samuel’s, and seeing that he would fit right into the 49ers offense helped raise him as “my guy.” Ultimately, Aiyuk caught short passes, shed tackles, drew Deep Targets, and received rushing carries in a multi-faceted role, like Samuel’s in 2019. 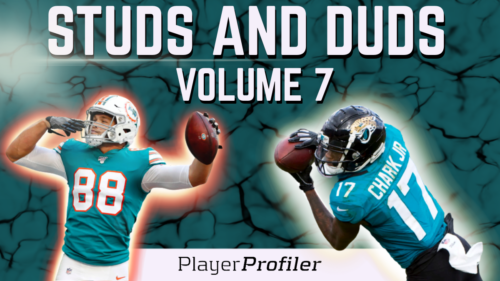 The success of Mike Gesicki and other late-round tight ends last season confirmed the process of fading the average draft positions outside of the “Big Three.” Past Travis Kelce, George Kittle, and Darren Waller, the Fantasy Points per Game differential between TE1’s will be within two to three points per game. Buying early into a small differential carries a heavy opportunity cost.

Quarterback play was a factor I did not consider enough when drafting wide receivers in 2020. I valued D.J. Chark over the likes of Will Fuller and Stefon Diggs. This was bad process, and my most fatal error. If a receiver like Chark can only attain quality targets in shallow ranges, it will be difficult for him to produce. 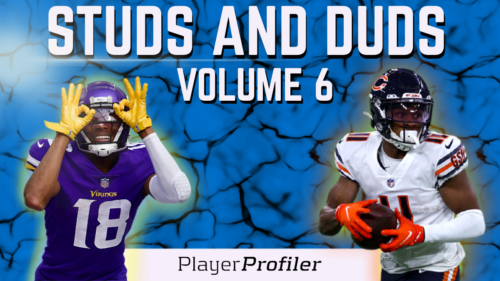 We have to pay attention to more than just one narrative. 2020 was a perfect storm for Justin Jefferson. Overall talent, a position of need, an aging veteran teammate, a shifting offensive scheme, and a skeleton defense all made it possible for him to succeed.

With both Mitchell Trubisky and Nick Foles playing the majority of snaps in eight games apiece, Darnell Mooney hit double-digit points in four of Trubisky’s games, while only hitting double digits in Foles’ games once. Meanwhile, Foles was attempting 1.4 more Deep Passes per game; they were just wildly inaccurate.