Without further ado, let’s see what the Tampa Bay Buccaneers and the Philadelphia Eagles have in store for us.

Tom Brady is playing like he’s 25 again. Brady has sliced defenses with 13 (No. 2 among qualified quarterbacks) Money Throws, and has averaged 27.3 (No. 2) Fantasy Points Per Game. The unstoppable force meets the immovable object of the Eagles No. 3-ranked pass defense. Start Brady no matter what.

If you’re looking for a consolidated Target Share, this is not your team. Mike Evans leads the group with a 20.5-percent (No. 40) Target Share. Despite lower target volume, he has been consistent. He’s scoring 18.5 (No. 11) Fantasy Points Per Game, and his 15.8-percent (No. 26) Hog Rate shows solid per-snap usage. Start Evans this week, even against No. 10-ranked cornerback Darius Slay.

Antonio Brown has been the apple of Tom Brady‘s eye, who’s given him a 27.1 (No. 18) Target Rate. On a per snap basis, his 19.2 (No. 7) Hog Rate shows that he’s getting the most opportunity out of Buccaneer receivers. His matchup, Steven Nelson (-15.3 Coverage Rating), is the juiciest of the three. Brown is set up to explode yet again.

Jalen Hurts And The Eagles Backfield

Jalen Hurts doesn’t have accuracy problems. He has a 7.5 (No. 17) Accuracy Rating and 12 (No. 4) Money Throws. The Konami Code QB can do it all. The Eagles offense may be struggling as of late, but it hasn’t affected Hurts’ fantasy production. He’s averaged 25.0 (No. 7) Fantasy Points Per Game and now faces off against the league’s worst pass defense. It’s wheels up.

Are the tides turning in the Eagles backfield? Miles Sanders saw his highest Snap Share and tied his highest target total on Sunday. This is great news since he is the better of the two backs and has been efficient on low touch totals. He has an 8.3-percent (No. 6) Breakaway Run Rate and averages 3.86 (No. 8) Yards Created Per Touch. Still, Sanders is a sit against the best rush defense in the NFL.

Conversely, Kenny Gainwell saw his lowest touch total last week. He’s been heavily involved in the passing game with a 12.3-percent (No. 12) Target Share. He’s also been effective on low touch totals. However, with a bad matchup and a small Opportunity Share, he belongs on the bench.

Devonta Smith has, admittedly, been a product of opportunity, not efficiency. His 39 (No. 17) targets and 43.8-percent (No. 6) Air Yards Share offset his mediocre efficiency metrics. His matchup, however, is Richard Sherman (-44.9 Coverage Rating). This is a smash spot for the rookie. 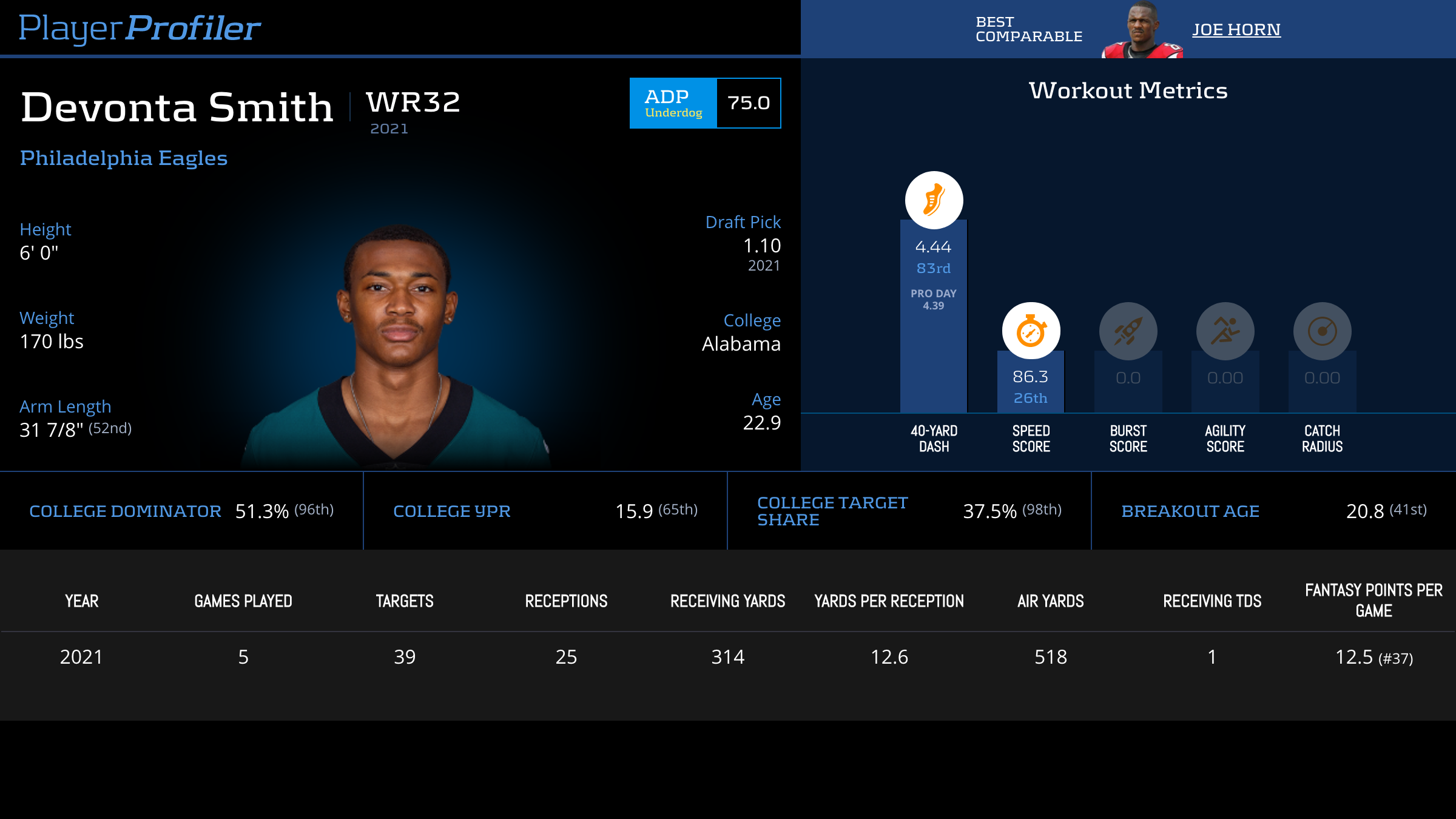 Neither Jalen Reagor nor Quez Watkins are seeing enough targets to be trusted in fantasy. Reagor has seen 25 (No. 55) targets and Watkins has seen 17 (No. 75) targets. Watkins is a solid DFS choice. His matchup is Ross Cockrell (+6.7 Coverage Rating) and Tampa is susceptible to deep shots.

Buccaneers players have been startable all year in fantasy, and that isn’t changing tonight. Tom Brady seems to be dedicated to improving this offense every week. Jalen Hurts and the Eagles will put up a fight. Tampa’s pass defense is porous, and Hurts’ dual threat ability should help open up the offense.

On short weeks, it’s generally advisable to favor the side of the defense when it comes to Vegas totals. This games total of 52.5 points is a little too high. It’ll come down to the wire, but I like the under this week. As for Tampa’s 7 point spread, I like Philly to put up a fight and cover +7.