It’s championship time! Congratulations to those playing for all the marbles in their respective leagues. There’s one week to go for many leagues, meaning there’s another week of games to preview. There aren’t many games with as many fantasy important options as this Vikings-Packers matchup, however. That means it is vital to break this game down to help everyone win titles. Onto the breakdown!

Minnesota Vikings head coach Mike Zimmer is a very good head coach and defensive mastermind, but also a curmudgeon when it comes to offense. For fantasy purposes, that’s what gamers care about the most, and he always leaves us yearning for more. Fortunately, Zimmer’s defense (mostly his secondary) and opposing offenses have done our bidding and forced Minnesota into multiple shootouts. This has been evident in Kirk Cousins‘ fantasy output this season.

Cousins has had a good season throwing the ball too. He’s ranks No. 7 among qualified quarterbacks with 539 attempts, while airing it out all over the field. He has 74 (No. 1) Deep Ball Attempts, 41 (No. 1) Money Throws, 4,369 (No. 7) Air Yards, and 7.5 (No. 7) Adjusted Yards Per Attempt. Squaring off Aaron Rodgers and the potent Packers offense, the recipe is right for Cousins to prosper yet again for fantasy as a QB1 option this week.

Justin Jefferson doesn’t need a shootout to prosper for fantasy, but it can’t hurt either. Jefferson broke out as a rookie, but has leveled up to yet another level this season, and there are numbers to back it up. Per PlayerProfiler, he leads all wide receivers in Air Yards (1,872), Air Yards Share (45.6-percent), Deep Targets (32), and Completed Air Yards (1,027). He’s logged 521 (No. 2) Routes Run and averages 2.79 (No. 6) Yards Per Route Run. Despite all the work down the field, he still turns on the jets after he hauls in the ball, with 424 (No. 6) Yards After Catch. For context, Jaylen Waddle trails Jefferson with 412 (No. 8) Yards After Catch despite the fact Waddle’s 6.3 (No. 101) Average Target Distance is HALF of Jefferson’s 12.6 (No. 21) total. Mind. Blown.

He was already a monster but Adam Thielen‘s injury allowed for Jefferson to take over the NFL.

Thielen sprained his ankle early in Minnesota’s defeat at the hands of the Detroit Lions. From that week on, Jefferson has vacuumed 51 targets in four weeks. He’s averaged 106 yards in that span. After scoring six touchdowns in the previous 11 games, in these four weeks, Jefferson has found the end zone three times. It is arguable the only preferred wide receiver to Jefferson both in the real world NFL and in the make-believe fantasy space is his counterpart across the field in Davante Adams. Jefferson already torched the Packers in Week 11 with an eight-reception, 169-yard, two-touchdown performance on 10 targets. He has fueled teams to title games and could be a league-winner both this week and in the years going forward.

Adam Thielen returned from his high-ankle sprain last week, but could not finish the game before aggravating the injury. He opted for season-ending surgery on that ankle, ruling him out for this game. K.J. Osborn steps up in his absence. Since Thielen’s ankle issue flared up in Week 13, Osborn played at least 79-percent of Minnesota’s snaps in every game over these last four weeks. The only other time he played that many snaps in a game this season was Week 1. He’s also seen at least seven targets in three of those four weeks. His efficiency metrics mirror that of Thielen’s without the red zone prowess. Osborn is a viable Flex option as the number two receiver this week if Thielen is out, but he needs a touchdown to stand out and that is far from a guarantee.

With Thielen out for the rest of the season, it is worth keeping an eye on rookie 5th-round pick Ihmir Smith-Marsette. 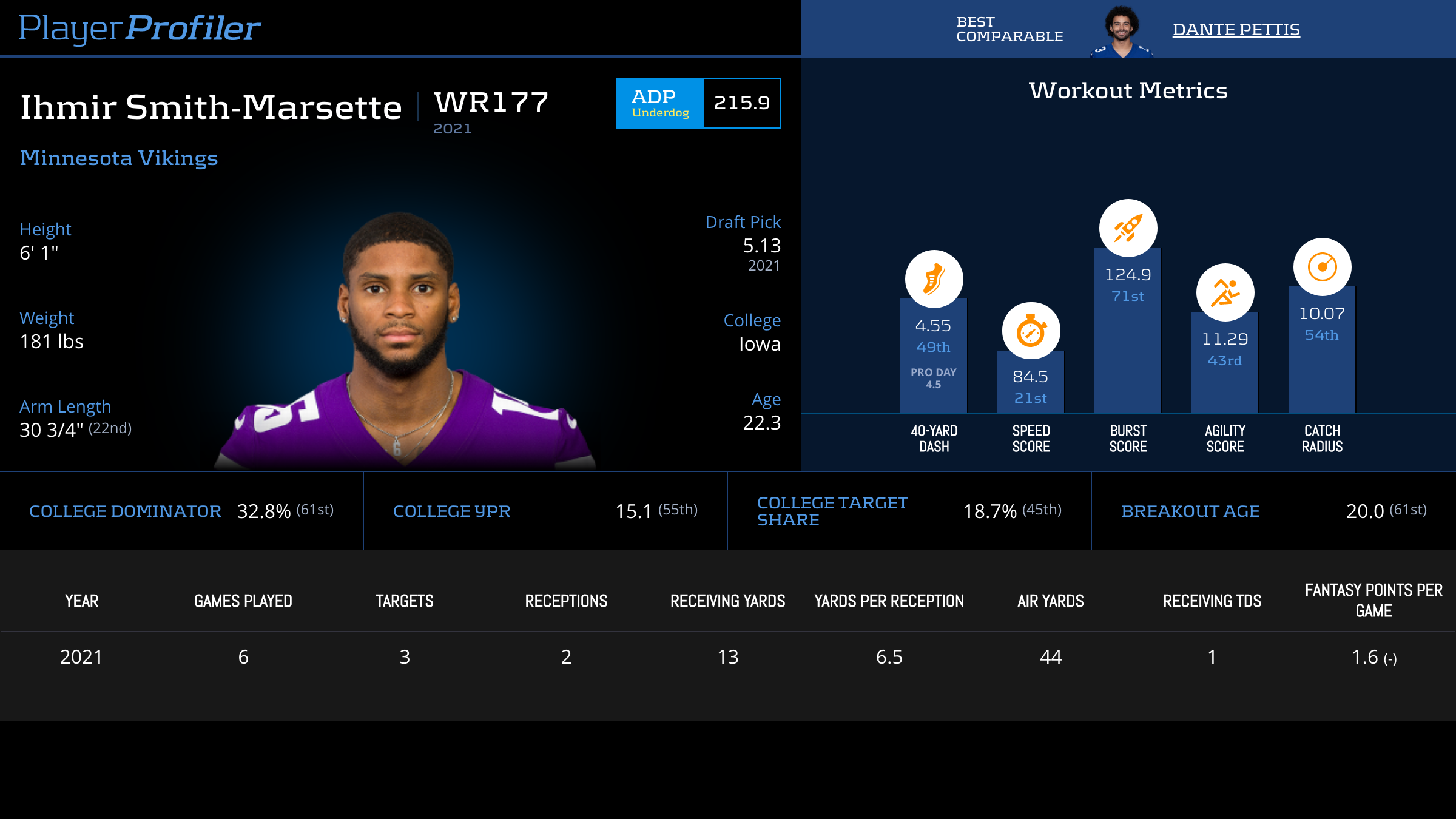 Smith-Marsette has not played that much this season, but he did play a career-high 48-percent of snaps in Week 15 where he caught his first NFL touchdown. He is not a fantasy option this week or the rest of the season, but worth monitoring for dynasty purposes.

Tyler Conklin‘s star has faded as the season has progressed. Since the team’s Week 7 bye, Conklin has seen more than five targets in three of the last nine games. He’s seen fewer than five targets in four of those games. Conklin’s usage has been good for a tight end, but he ultimately will need a touchdown to be relevant. His 15 (No. 7) Red Zone Targets make him as good a candidate as any to do so.

The run game is very straightforward. Dalvin Cook is the guy. Minnesota has made no qualms about that. In the nine games Cook has started and finished, he has registered at least 20 touches in eight. He has an 80.9-percent (No. 3) Opportunity Share and averages 5.0 (No. 25) Yards Per Touch. When he plays, he gets the rock a lot and produces a ton of fantasy points. The same can be said (to a slightly lesser degree) for Alexander Mattison. In the four games he’s had to fill in for Cook, Mattison has *averaged* 26.25 touches. In those same games, he’s averaged 5.5 targets. With that workload, it is impossible not to produce fantasy points no matter the opponent or circumstances.

Cook was activated from the COVID-19 list on Wednesday, meaning he now has the golden ticket to swinging fantasy title games this week against Green Bay’s second-worst run defense per Football Outsiders’ run defense DVOA metric.

Before touching it on the rest of the passing attack, I’ll briefly discuss Davante Adams. In the 13 games this season he has played with Aaron Rodgers, he’s registered at least 76 receiving yards in 10 of them. He’s hauled in at least five receptions in all but one (Week 6 vs Chicago). After only scoring three touchdowns in his first eight games with Rodgers at the helm, he’s hit paydirt seven times since Week 11. That week, he played the Minnesota Vikings and toasted them to the tune of 115 yards and two touchdowns on seven receptions and eight targets. Their secondary isn’t nearly as menacing as the Cleveland Browns secondary, where he almost replicated that stat line.

As mentioned last week, Adams is inevitable, and he will snap again this week. The rest of the passing attack is where things get interesting.

The Vikings secondary is very generous to opponents. They allow the sixth-most fantasy points to quarterbacks. Since their Week 7 bye, only Justin Herbert and Matthew Stafford (who did play on a Tuesday before in that same week) have failed to throw for more than 200 yards. And one other quarterback in that stretch (Jimmy Garoppolo) did not reach at least 266 yards. Aaron Rodgers dropped a 385-yard, four-touchdown anvil of a performance on Minnesota’s heads when these two last played in Week 11. Rodgers, with his 8.3 (No. 1) Adjusted Yards Per Attempt, is one of the leading candidates for MVP. He shredded the Vikings last time; it’s not hard to see him do it again this week.

Another pass catcher will be relevant for fantasy purposes. It’s a matter of figuring out who it is. Marquez Valdes-Scantling is the favorite, but it is close between him and Allen Lazard. In nine games this season, Valdes-Scantling has registered at least five targets five times. Lazard has done so the same number of times in 13 tries, including last week where he did so in Valdes-Scantling’s place in the lineup. However, since MVS returned from his hamstring issue in Week 9, the target distribution between the two has been near-even. In the five games these two have shared the field in that span, MVS ekes a 25-22 advantage in targets. Lazard did score last week and racked up five targets, showing he is more than capable of providing a big game himself. 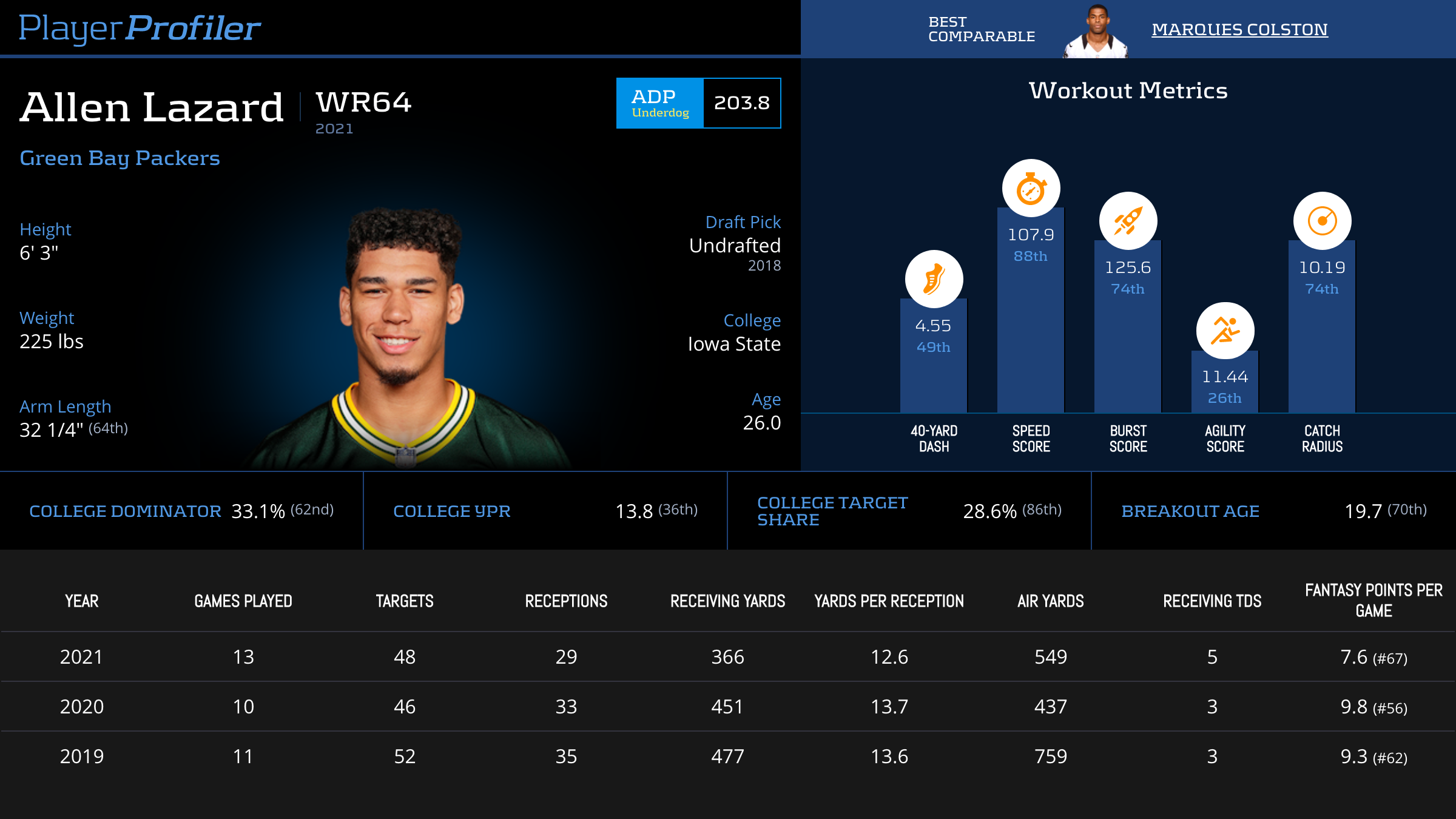 Both are viable against a team allowing the second-most points to wide receivers on the season, but if one were forced to choose one, the answer would be Marquez Valdes-Scantling.

Lazard does edge him in red-zone targets 13-7, but Valdes-Scantling owns everything down the field that doesn’t go Adams. Valdes-Scantling’s has a 35.3-percent (No. 15) Air Yards Share, and owns a 22-8 deep target edge over Lazard (keep in mind that Valdes-Scantling has missed six games while Lazard has missed two). Rodgers hit Valdes-Scantling for a deep play touchdown in Week 11; I like his chances of replicating that. Both are viable as Flex options, but the slight edge goes to MVS.

The next man up in the wide receiver room last week was Equanimeous St. Brown. He played 48 of Green Bay’s 59 snaps last week and ran 26 routes. He did not get targeted, however, but he was out there plenty. St. Brown isn’t an option for fantasy championships, but he’d make for a great DFS dart throw rounding out a roster in case of emergency. 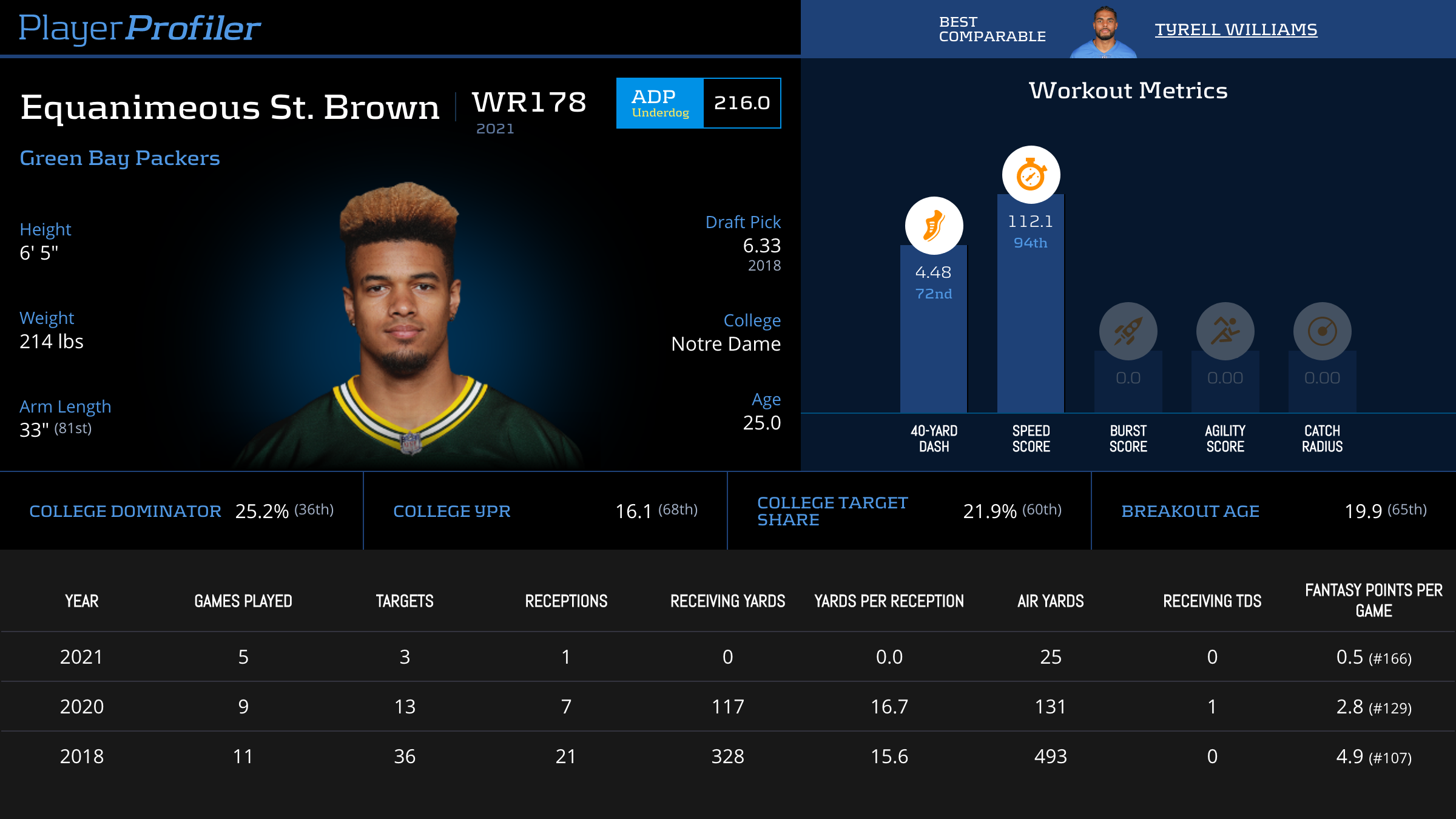 Marcedes Lewis was placed on the COVID list this past Tuesday. Lewis isn’t the biggest fish in this passing game, but his absence could spark second-year tight end Josiah Deguara into a viable fantasy option. Lewis has lasted this long in the NFL thanks to his excellence as a run blocker, but that has prohibited Deguara from bursting onto the scene in a big way. Deguara is the primary receiving option in the tight end room, however. Lewis hasn’t run more than 11 routes in a game once this season; Deguara hasn’t run fewer than 12 since Week 10. Tyler Davis and Dominique Dafney could step into Lewis’ run-blocking role, but if Lewis doesn’t play, there’s a window for Deguara to play a bigger role in this offense. If desperate, there are worse options than Deguara, but he also is more of a DFS play than in seasonal leagues.

A.J. Dillon looked to have closed the gap between him and Aaron Jones and turned this backfield into an even split. Jones has reclaimed his spot on the throne in this backfield in the last two weeks. Since Week 15, Aaron Jones has 25 carries and eight targets compared to Dillon’s 16 carries and four targets. Jones is almost doubling Dillon in routes run in that span too, with a 29-16 advantage. Dillon still saw 12 touches last week to Jones’ 17, and is as good a candidate as there is to punch in a touchdown at the goal line, but he is not a player that must be inserted into lineups anymore.

Jones is a great RB1 option every week, while Dillon is more of a low-end RB2 at the moment. Both should be started this week, however, with the Packers going up against Minnesota’s No. 22-ranked run defense according to Football Outsiders’ run defense DVOA metric. One that just gave up 135 total yards and a touchdown to Sony Michel last week, and 104 total yards and two touchdowns to Najee Harris three weeks ago.

TE: Josiah Deguara and Tyler Conklin are touchdown-dependent dart throws who are viable if desperate.

The Packers are white-hot and need to keep the good vibes going in order to secure the number one seed in the NFC. The Vikings already beat the Packers once this season and need to win to stay alive in the playoff picture. With both teams having something to play for, I don’t see the Packers dropping two games to this Vikings team. The game goes over, the Vikings cover the 6.5 point spread, but the Packers win 31-27.