The best way to find fantasy success is to simply draft well. That’s easier said than done, but with enough research you can find some guys that will present great value to your team later in the draft. Of course, there are some things you can’t plan for like poor coaching decisions or injuries. However, for the most part there are some signs to look for. For tight ends, fantasy gamers mainly want to look for a good profile and a good offense. In 2021, people threw darts at tight ends like Dalton Schultz, Dawson Knox, and Zach Ertz and found success. There will be more tight ends that will be draft day or waiver wire steals in 2022. Without further ado, here’s a top five list of values at the tight end position for 2022.

Robert Tonyan came in at No. 3 on my tight end bounce-back candidate list last month, here’s why. Tonyan has a legitimate claim to be Aaron Rodgers’ favorite target in 2022 with Davante Adams going to Las Vegas. In 2020, Tonyan tied with Travis Kelce for most touchdowns among tight ends. He scored 11 touchdowns, which is two more than Mark Andrews had in 2021. That was in a season where Adams scored 18 touchdowns as well. Now that he’s gone, Rodgers should look to rekindle the connection that was lost in 2021 when Tonyan tore his ACL. If Tonyan returns to form and remains healthy, 2022 should be a great bounce-back year for him.

In his year-3 breakout season, Robert Tonyan commanded just 11.8% of the team’s target share, yet was still able to score on an absurd 21.1% of his receptions.

Also in 2020, Tonyan was No. 1 amongst tight ends in catch rate, true catch rate, target separation, QB rating per target, and fantasy points per target. Tonyan has had success before, and now there are 169 targets being vacated by Adams’ departure. Even though he missed nine games in 2021, he still had the No. 10 most deep targets among tight ends. Seven of his 29 targets in 2021 were deep targets and another six of those 29 targets were in the red zone. That means nearly half of his targets were high value targets, and these are targets coming from Rodgers.

Best Season Average: In his only season above 40 receptions- David Njoku averaged 9.6 PPG in 2018, which was the No. 10 highest average amongst tight ends.

Regardless of who the Browns starting quarterback is Week 1, David Njoku‘s athleticism is undeniable. He’s 6-4, 256-pounds and doesn’t score below the 76th-percentile in any category measured on playerprofiler.com. His profile is highlighted by a 97th-percentile burst score and 94th percentile catch radius. In every healthy season, Njoku hasn’t averaged less than 11 yards per reception either. With Austin Hooper finally leaving the Browns, Njoku will have another chance as the main Browns tight end. This time without a rookie Baker Mayfield. 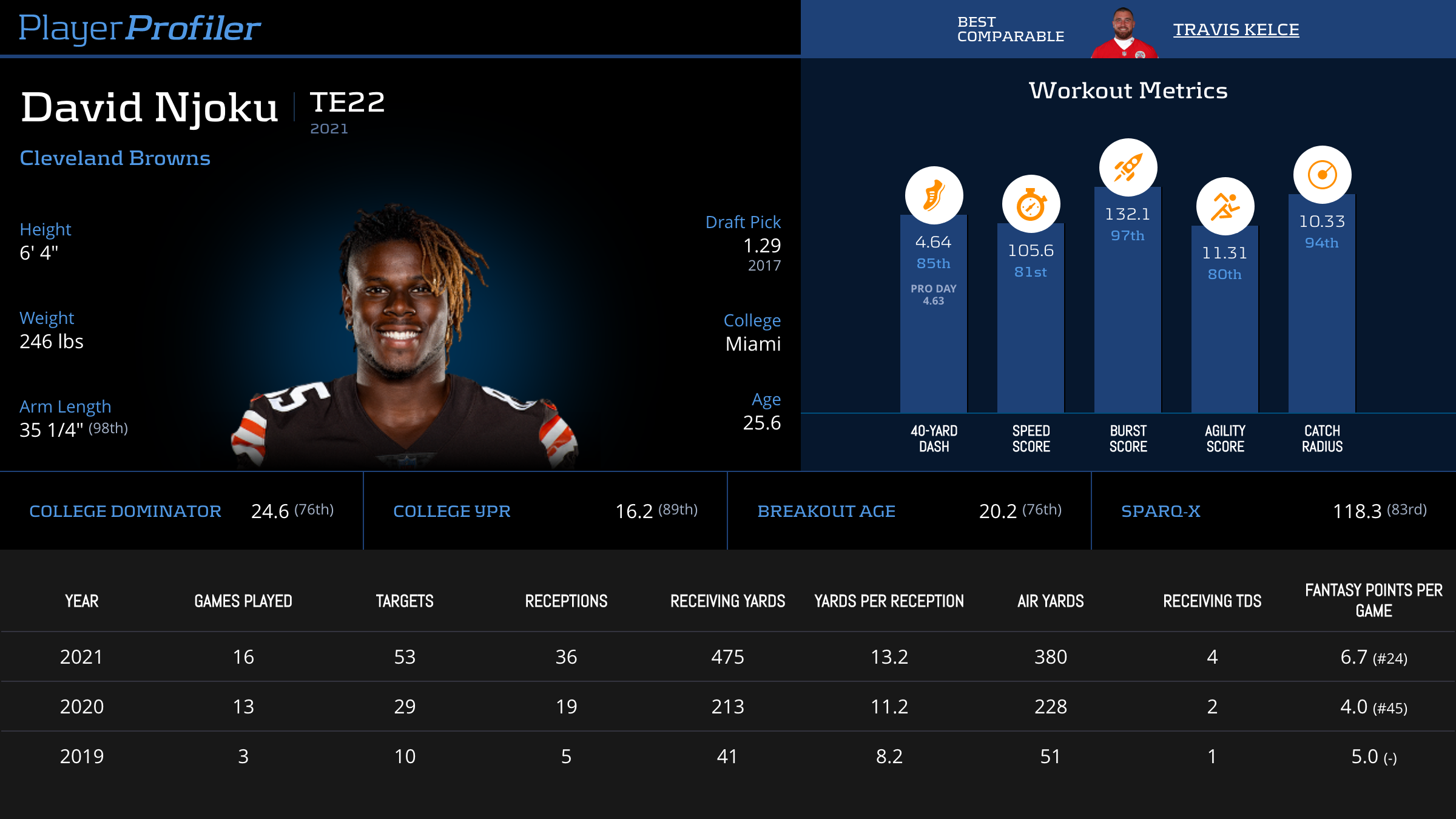 In 2018, Njoku finished as TE9, so a top 12 finish in 2022 is a possibility. Njoku finished 2018 top 10 in pretty much every important tight end metric. He was No. 7 in targets, No. 8 in receptions, No. 9 in touchdowns, and No. 8 in both air yards and receiving yards in general. This was with a rookie Mayfield who threw for less than 4,000 yards. If Deshaun Watson is the quarterback, Njoku has a higher ceiling for sure. However, even Jacoby Brissett could put up around 3,000 yards and make Njoku at least a TE2 in 2022. For such a cheap price, fantasy gamers might as well take a gamble on athleticism. The Browns are trusting in Njoku as they just made him the No. 5 highest paid tight end. Clearly fantasy gamers should be looking at Njoku as one of the better values at tight end in 2022.

As mentioned earlier, a great thing to chase in fantasy football is a great offense. This is especially the case with a top-heavy and mostly inconsistent position like tight end. So why not take a late-round flier on the new Chargers tight end that has no workout metric score lower than 74th-percentile. In 2021, the Chargers finished as a top 5 offense in both yards and points for in their first year under head coach Brandon Staley and offensive coordinator Joe Lombardi. They will look to improve in Year 2, and if fantasy gamers want a cheap piece of the offense Everett is your guy.

Gerald Everett is now a Charger.

Justin Herbert targets TEs at a Top-8 rate since 2020.

This next stat is why Everett must be on your radar…

With Jared Cook gone, Everett finds himself in an opportunity where there are 83 vacated targets- 20 more than he’s ever seen in a season. Cook only had a 57-percent snap share and still had more fantasy points per game than Everett last season. Everett had a 73.2-percent snap share. There is without a doubt tight end production in the Chargers offense, and with such a low ADP, and dynasty ranking, Everett may end up being one of the best values at tight end in 2022.

Best Season Average: Hayden Hurst averaged 9.3 PPG in 2020 in his only season as the true starter, the No. 15 best average amongst tight ends.

Like Everett, Hurst has found himself on one the league’s best offenses. He will finally have the chance to prove he was worth the first-round draft capital. With Ja’Marr Chase and Tee Higgins proving themselves as one of the best wide receiver duos in the league, Hurst should be open frequently. In the Bengals two playoff games with a healthy C.J. Uzomah, Uzomah was targeted 14 times and put up 18.4 and 14.1 points in PPR formats. That’s plenty of volume to the tight end position in competitive games. Uzomah and Hurst have a shockingly similar profile with Hurst having better production in his only chance as the true starter. Uzomah has left for the New York Jets, so Hurst has a chance again.

#Bengals TE Hayden Hurst getting a lot of praise this off-season pic.twitter.com/JWR1Sq1x4w

On the Falcons in 2020, Hurst finished as the TE10 while the Falcons offense finished in the bottom half of the league in points for and yardage. Uzomah finished last season with the Bengals as TE19 which should signify Hurst’s floor. Hurst has TE2 floor with a low-end TE1 ceiling. It doesn’t get much better for an ADP of 186 in redraft and 217 in dynasty start-ups. Because of this, Hurst is one of the best values at tight end in 2022.

What better to place look for value than the guy who had the No. 4 most targets among tight ends in 2021 with 111. With a redraft ADP of 112 he is the No. 12 tight end taken on average. This is a guy who has true top five potential in 2022. He has one of the best profiles among tight ends with no workout metric score lower than the 95th-percentile. He has also averaged over nine fantasy points per game over the last three seasons. 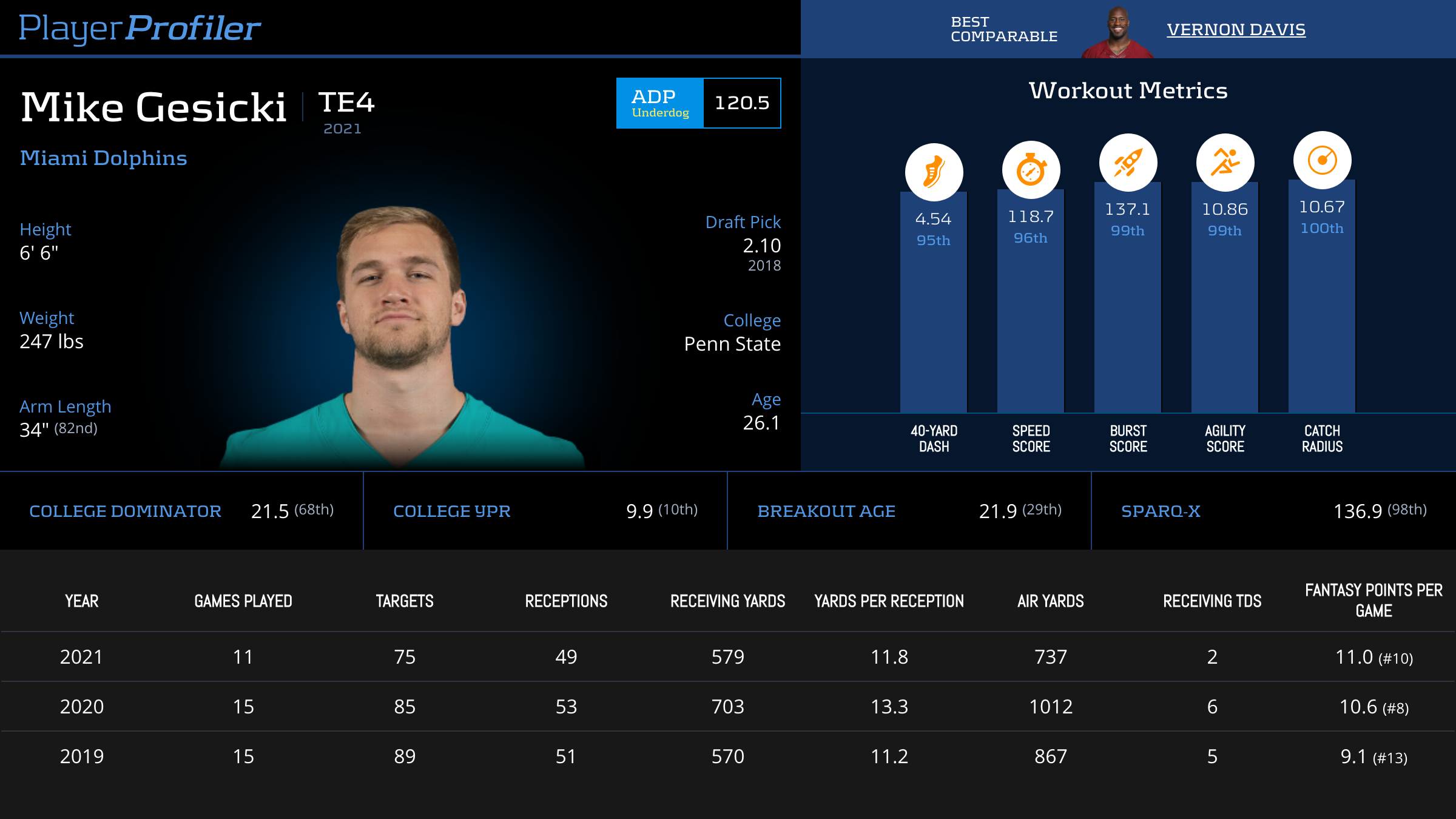 Gesicki finished 2021 as the TE11 with poor quarterback play and only two receiving touchdowns. He still managed his highest receiving total in his career with 780 yards with 73 catches. His receiving yards have also steadily improved every year he’s been in the league. In 2021 Gesicki finished top five in more than a few stats including targets, slot snaps, routes run, air yards, air yards share, receptions, unrealized air yards, true catch rate, and average cushion. Those are all signs of a productive player. Now it’s time for the offense in Miami to start clicking. With Hill and Jaylen Waddle requiring the defenses attention, Gesicki won’t get the coverage he deserves. He should be a consistent option on a solid offense in 2022. He is the only tight end on this list that has true top five potential and as a result he is one of the best values at tight end in 2022.