It is going to be the training camp battle that will have fans and fantasy players on the edge of their seats. Matt Rhule’s NFL coaching career hangs in the balance. Carolina Panther fans continue to question why again and again and again as their team tosses around draft picks for subpar quarterback talent. Worse-off, likely bidding against themselves. That’s right, with the Baker Mayfield trade the other day the Panthers have now traded six draft picks for three quarterbacks in the last 15 months. This article takes a look at Baker Mayfield vs Sam Darnold to see which quarterback is going to maximize the fantasy assets on the Carolina Panthers.

The Trades and Draft Picks

There is the Sam Darnold deal of last April. They traded a 2021 sixth round pick and 2022 second and fourth round picks for the former No. 3 overall pick. The Panthers also picked up his massive 5th year option of $18.9 million, fully guaranteed.

During NFL Draft weekend, as quarterbacks not named Kenny Pickett kept falling down the draft board, the Panthers took a swing in a highly questionable quarterback class. They dealt their 2022 fourth rounder, pick 137, plus a 2023 3rd rounder to the New England Patriots for pick 94 and drafted Matt Corral.

As if those trades didn’t send your head for a spin. Fast forward two months to July sixth. The Panthers trade for the disgruntled, former first overall pick of the Cleveland Browns quarterback, Baker Mayfield. In exchange the Browns received a conditional-2023 fifth round pick which could become a fourth rounder depending on playing time.

There is no denying it. The situation is messy, but the goal was clear. The Panthers wanted competition for Sam Darnold. Even though they traded for him a season ago and picked up his option, the panthers still wanted competition at quarterback. However, who can blame them really? They want to have an open quarterback competition later this summer in training camp and in the preseason.

Despite the trade up, Corral seems more of a developmental project than a real competitor for the job in 2022. He is far more mobile then both Darnold and Mayfield. Corral has a quick arm with good arm strength. He has an extremely competitive mentality. There are things to get behind here, but he’s still a third-round quarterback who likely needs time to develop. 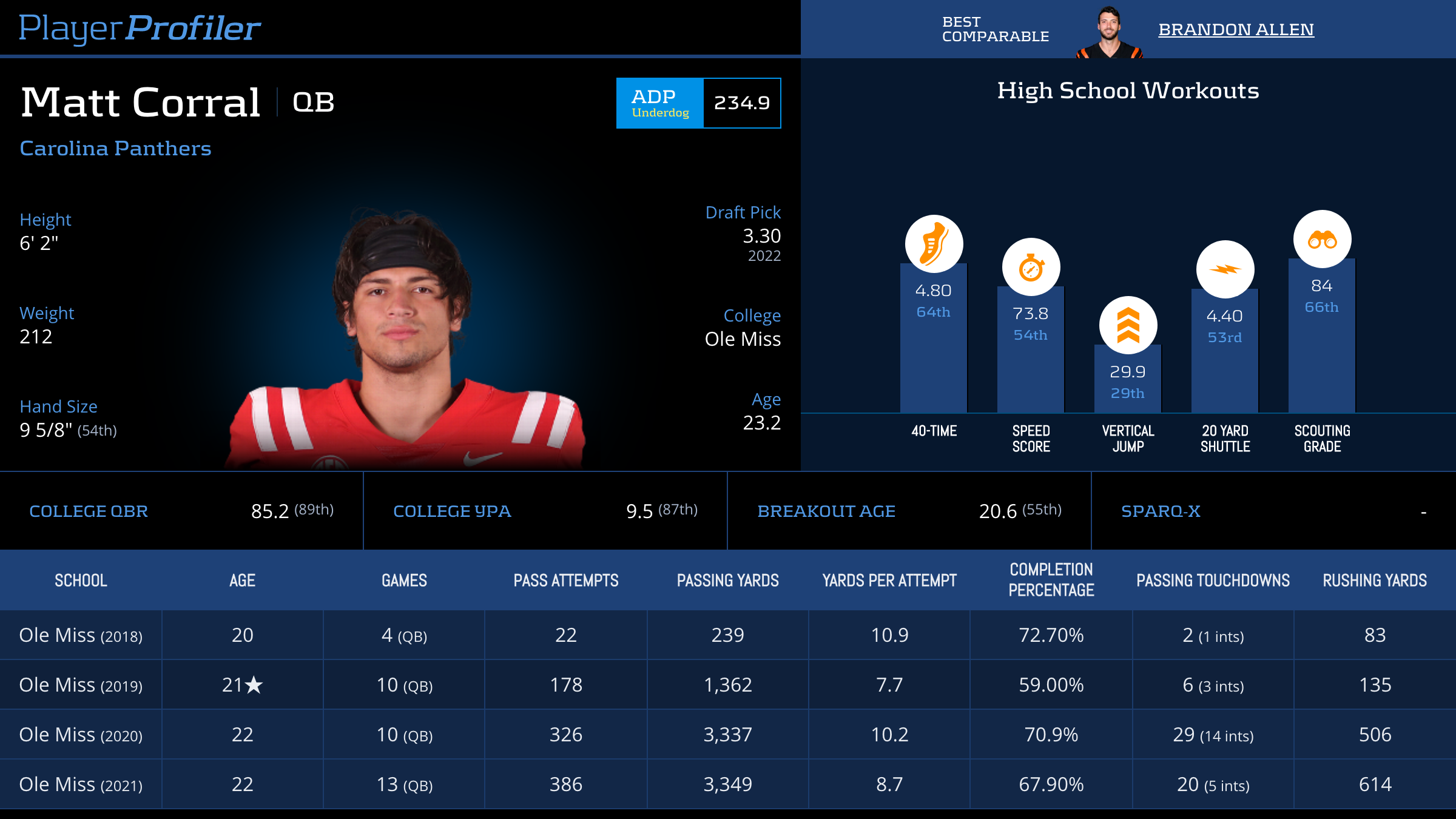 He is a wildcard in all this who shouldn’t be completely ruled out. Rhule, you would hope, is going to do what will help him keep his job in Carolina as head coach. However, money talks in the NFL. Darnold and Mayfield certainly have the financials working in their favor to be the main competitors.

Darnold will cost them 18.858 million in 2022 which ranks No. 12 among quarterbacks. This will be a painful pill to swallow. At the time of acquiring Darnold, the Panthers felt really good about the prospect of Darnold as their quarterback. He was cheap in 2021 with some high risk associated with having to pick up his option. However, 18 million would have been cheap by some standards if he could have been the Panthers’ answer at the position.

Mayfield, after the Browns eat some contract and Mayfield himself takes a pay cut, will cost the Panthers $4.858 million in 2022. Mayfield presents the least amount of risk with his contract given he has proven himself a more capable starting quarterback then Darnold. Prior to last season where Mayfield was largely affected by a partially torn labrum, he threw for 3,500 yards and 20 or more touchdowns in three straight seasons. While Darnold, who has struggled with health, has only had over 3,000 yards once in his career and has never thrown for 20 touchdowns.

Now the real question is who do fantasy managers want on their fantasy teams? It’s quite clear both quarterbacks are not valuable fantasy assets. Darnold has never finished in the top 20 in fantasy points per game over four seasons. While Mayfield, who has consistently stuck around QB25 in points per game production, did peak in his rookie season as QB18 with nearly 18 points per game.

Managers care mainly about the likes of DJ Moore, Terrace Marshall, and Robby Anderson plus whether or not they can buy into Tommy Tremble hype. Christian McCaffrey is quarterback proof.

The NFL is a pass happy league, so it only makes sense that a quarterback willing to let loose more than others will find fantasy success. Plus, pass attempts with over 20 yards of air travel likely mean a far bigger play for the receiver and more fantasy points. Over the last three seasons, 78-percent of the top 12 quarterbacks in deep ball attempts (28 of 36) also finished as a top 12 quarterback for fantasy.

For the sake of fairness, I am going to use Baker Mayfield’s 2020 season versus Sam Darnold’s 2021 season. We can debate it all we want, but Mayfield’s torn labrum affected his ability to be the quarterback we saw his first three seasons. Mayfield was on pace for his lowest pass attempts, lowest passing yards, lowest number of passing touchdowns, and second worst true completion percentage of his career last season.

Last season, Darnold ranked No. 28 in deep ball attempts with 39. He did miss five games, so his per game pace of 3.3 would have put him at 56 in a full 17 game season. This would have ranked him at No. 20. For comparison’s sake, he would have been behind Mayfield and his bum shoulder by two attempts. Oh yeah, Mayfield missed three games and still had 58 deep attempts which ranked him No. 19 amongst quarterbacks.

I won’t sugarcoat this. Darnold is terrible with the deep ball and doesn’t seem to like throwing it to make matters worse! His completion percentage on deep attempts has never ranked inside the top 30 in four NFL seasons, and his total attempts have ranked No. 20 two times but never higher. Even if you look at per game, because he has missed games all four seasons in the NFL, the best you get is No. 15 in deep ball attempts. A quick peek at his efficiency tells you all you need to know in regard to his unwillingness or inability to let the arm loose a bit.

Mayfield gets the win in this category, easily, both from an attempted perspective, which is most important, and an accuracy perspective.

Mayfield can add a different dimension to this offense with a willingness to test defenses deep. This is something both Darnold and Teddy Bridgewater, the Panthers quarterback of 2020, didn’t bring to the table. Both delivered identical 7.1 air yards per attempt in back-to-back seasons for the Panthers! Mayfield has never thrown under eight air yards per attempt in a season.

Air yards are the least indicative of the three categories. Nonetheless, they are still an efficient predictor of both a high-octane offense and fantasy quarterback success. Over the last three seasons, 25 of 36 quarterbacks, or 69-percent, who ranked top 12 in air yards finished as a top 12 fantasy quarterback.

In 2021, Sam Darnold ranked No. 28 in this category with 2,876 air yards. This works out to a per game average of 239.7 which ranked No. 21. In his first two seasons with the Jets, Darnold delivered averages of 295.8 and 288.3 air yards per game. Darnold is capable of more, but his last two seasons have presented dramatic drop-offs from the first two. Again, Mayfield ranked ahead of Darnold last season with 246 air yards per game and a total 3,448, ranking No. 22 amongst quarterbacks in that category.

The drop off hasn’t been as pronounced with Mayfield as it has been with Darnold over the last two seasons. They have both shown an ability to air the ball out at a top 15 rate at or close to 300 yards per game. Again, the edge goes to Mayfield in this category.

Fantasy Points per Drop Back

Lastly, and one of the most indicative of quarterback fantasy success, is fantasy points per drop back. Over the last three seasons, 30 of 36 quarterbacks to finish top 12 in this category finished as a top 12 fantasy producing quarterback. That’s a whopping 83-percent!

As I alluded to earlier, we aren’t expecting either Sam Darnold or Baker Mayfield to be a top 12 QB. We want the quarterback who will be best for our fantasy assets with some potential for sneaky quarterback upside.

While the decimal points make the difference seem small, it really isn’t. It is fantasy points that are ultimately being taken away from our fantasy weapons. Mayfield again takes the win in this category.

It is a clean sweep for Mayfield!

While the move from Mayfield to Darnold is marginal in regard to real life NFL value and being a franchise quarterback. For fantasy purposes its clear managers will want to see Mayfield running out to that first huddle Week 1. He takes the advantage in three key categories indicative of fantasy success.

DJ Moore owners have begged for him to get a good quarterback. One could argue Mayfield maybe the best he’s had. We have seen the success of the tandem of Nick Chubb and Kareem Hunt with Mayfield. Christian McCaffrey, if healthy, will find his way back to top 12 running back status. And perhaps the Tommy Tremble hype could come to fruition. One only needs to look at the Browns tight ends last season.

While this decision to go with Mayfield would ultimately prove that the Panthers made a major mistake with Darnold. It is the sad reality for Panthers fans when a franchise continues to play the bridge quarterback game versus planning a proper direction for the quarterback position.