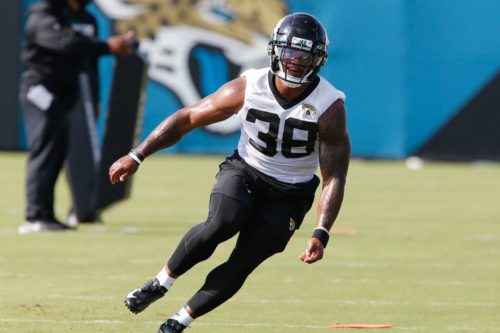 Few times in a season does a player emerge that’s truly worthy of a high priority pickup. The league-winning move may be one that doesn’t require any FAAB dollars to be spent. A key to winning consistently in fantasy football is using advanced stats and metrics to identify potential breakouts before they happen. Stashing players that would become hot adds with a big game before others have a chance to acquire them is a winning strategy in any format.

Of course, this is much easier said than done. When it comes to picking up, and sometimes starting, players that no one else in the fantasy community wants, pinpointing hits with any consistent success is inherently difficult. The only real home run from last year’s edition of the series was Chase Edmonds, and his run of glory didn’t last long before a hamstring strain extinguished the breakout flame. Entering any given week, these widely available players have enough obstacles to overcome on the path to consistent fantasy relevancy to keep the general public off of them. Still, there are enough players with upside worth stashing in advance of this week’s kickoffs in case they hit big. These are the perfect players to stash for owners who find themselves with a free roster spot after an IR stash or two.

In our recent Bold Predictions collaboration, I planted my flag on James Robinson, though the sentiments bear repeating. Stash him now if he’s available, because he is absolutely for real. Much has had to go right in order for him to be in the position he currently finds himself; the favorite to lead Jacksonville in carries for the foreseeable future. Leonard Fournette is gone, Ryquell Armstead is on the COVID list and Devine Ozigbo has landed on IR. Chris Thompson and Dare Ogunbowale can catch some passes, sure, but they don’t have Robinson’s league-winning profile. It doesn’t matter how bad the team projects to be when a player is set to inherit a role that produced 316.0 (No. 2 among qualified running backs) Weighted Opportunities just last year. 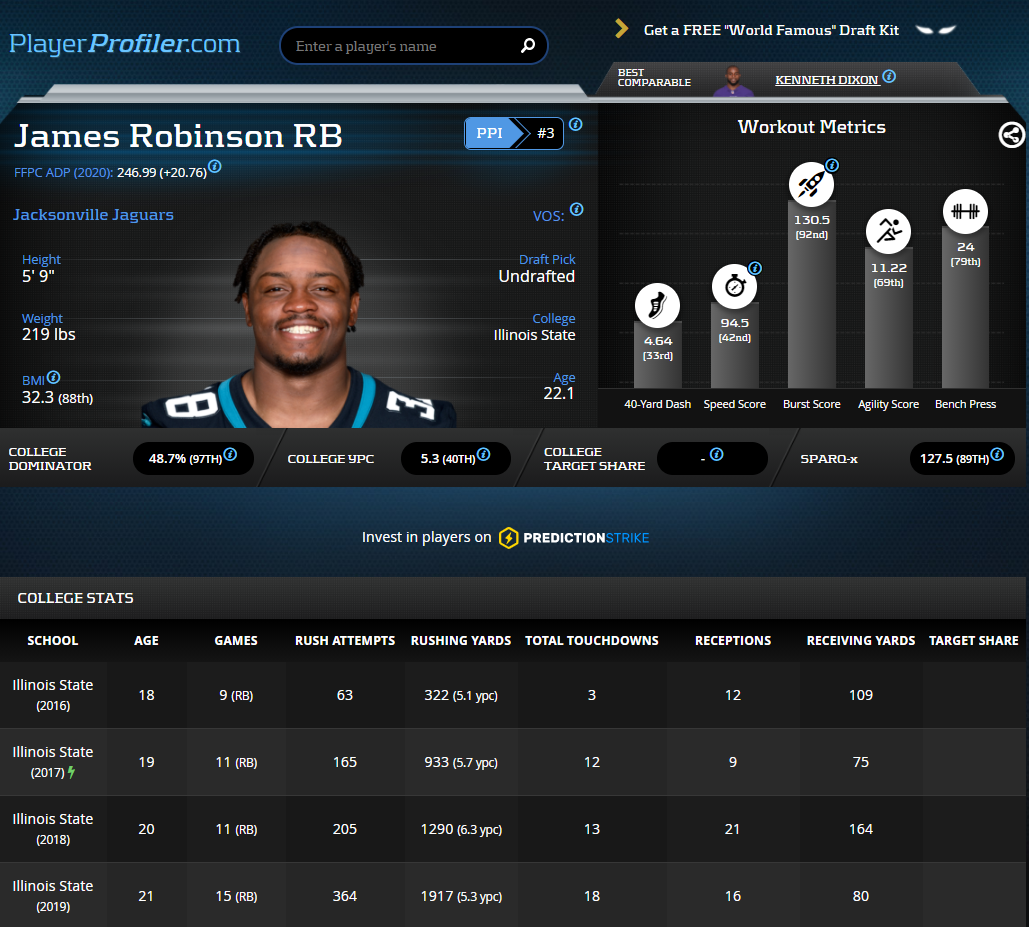 In order to make it in the NFL as an FCS Division I running back, a player better be an elite-level producer and/or athlete. Robinson is both. His senior campaign at Illinois State officially put him on the radar. He only caught 16 passes, but the team attempted just 268 across 15 games. His 48.7-percent College Dominator Rating, a 97th-percentile mark, is the best among all incoming rookie backs. He has elite burst and tremendous weight-adjusted agility. His 107.2 Athleticism Score is the best in this rookie class per the Data Analysis Tool, and No. 16 among all running backs in the entire database.

That fact that he stuck around the team for this long in an offseason where all UDFAs faced a steeper-than-usual uphill climb to make a roster should’ve been the warning flare in the sky for fantasy gamers. The time to acquire him in all formats is running out. Be on the right side of history.

With Kenny Golladay doubtful to suit up, we know it’s wheels up for Marvin Jones and T.J. Hockenson. Savvy fantasy gamers need a contingency plan in case Babytron’s mid-week hamstring injury keeps him out for longer than expected. Danny Amendola may now see enough targets to be a viable Flex play against the Bears, but the Tomorrow’s Newspaper series prioritizes stashing players with more upside. Enter the 5-9, 192-pound Marvin Hall, owner of 19 catches for 470 yards and three touchdowns across three pro seasons with Atlanta and Detroit. Normally we don’t go anywhere near players who look like him. His 6.3-percent (2nd-percentile) College Dominator Rating and 4.3-percent (1st-percentile) College Target Share suggest he underperformed his athleticism in college. The interest in him is because of the role he plays in Detroit’s offense.

Hall only drew 11 (No. 155) targets last year, but had eight (No. 81) Deep Targets. His seven (No. 150) receptions for 261 (No. 100) receiving yards helped give him astronomical marks in many of PlayerProfiler’s efficiency metrics, and he did most of that damage with Matthew Stafford healthy. In fact, eight of his 39 career targets have gone for 30-plus yards. Golladay led all wide receivers with 37 Deep Targets last year, so it would make sense for Hall to slide into that role over fifth-round rookie Quintez Cephus. Especially given his familiarity with the offense and the shortened offseason program. Stafford was out for both of last year’s games against Chicago, adding to the upside of all Lions skill-position players. Granted the offense shouldn’t expect to be more efficient without their top receiver. Still, there is fantasy upside to be had while Golladay is sidelined.

Like Kenny Golladay, Mike Evans suffered a mid-week hamstring injury. Since then, he’s been given every designation under the sun, from game-time decision, to doubtful, to now being “upgraded” to questionable. It’s all worrisome given that a hamstring strain ended his season in Week 14 last year. His range of outcomes for Week 1 is wide, from being a decoy, to playing more snaps than anticipated and bailing out fantasy gamers who start him, to potentially suffering an in-game setback. All of it points to a simple solution. One that the Underworld faithful could probably see coming from a long ways away. Stash Justin Watson.

justin watson is on track for a significant week 1 role given:
*2+ years of experience, including 2 games started in 2019, plus small college domination
*impressive size+athleticism combo
*slot experience
*offseason development of route inventory and explosiveness per mike evans pic.twitter.com/X0EXI5EcJb

Watson has the size, speed, explosiveness and experience to be a hot waiver claim if he has a boom week. Scott Miller has also received plenty of offseason hype. However, with no preseason games, we can only speculate about which of Tampa’s ancillary receivers will start the year in which role. Give me the 6-2, 215-pounder with more NFL experience, superior athleticism and a 98th-percentile College Dominator Rating. We’ll find out the correct answer once we see who Tom Brady develops trust in when the proverbial bullets start to fly.

Despite a black-box athletic profile and an uneven college career, Van Jefferson rose up the ranks at the Senior Bowl and impressed the Rams enough to draft him with the second-round pick they acquired when they traded Brandin Cooks. Jefferson kept the momentum going throughout the summer, playing well enough that talk has surfaced of him opening the season as the No. 3 receiver over Josh Reynolds. Of course, Reynolds isn’t a rookie in a year with a shortened offseason, and LA’s desire to run more 12 personnel with Tyler Higbee and Gerald Everett could keep Jefferson from popping early. Again, with no preseason games, it’s all speculation for now. 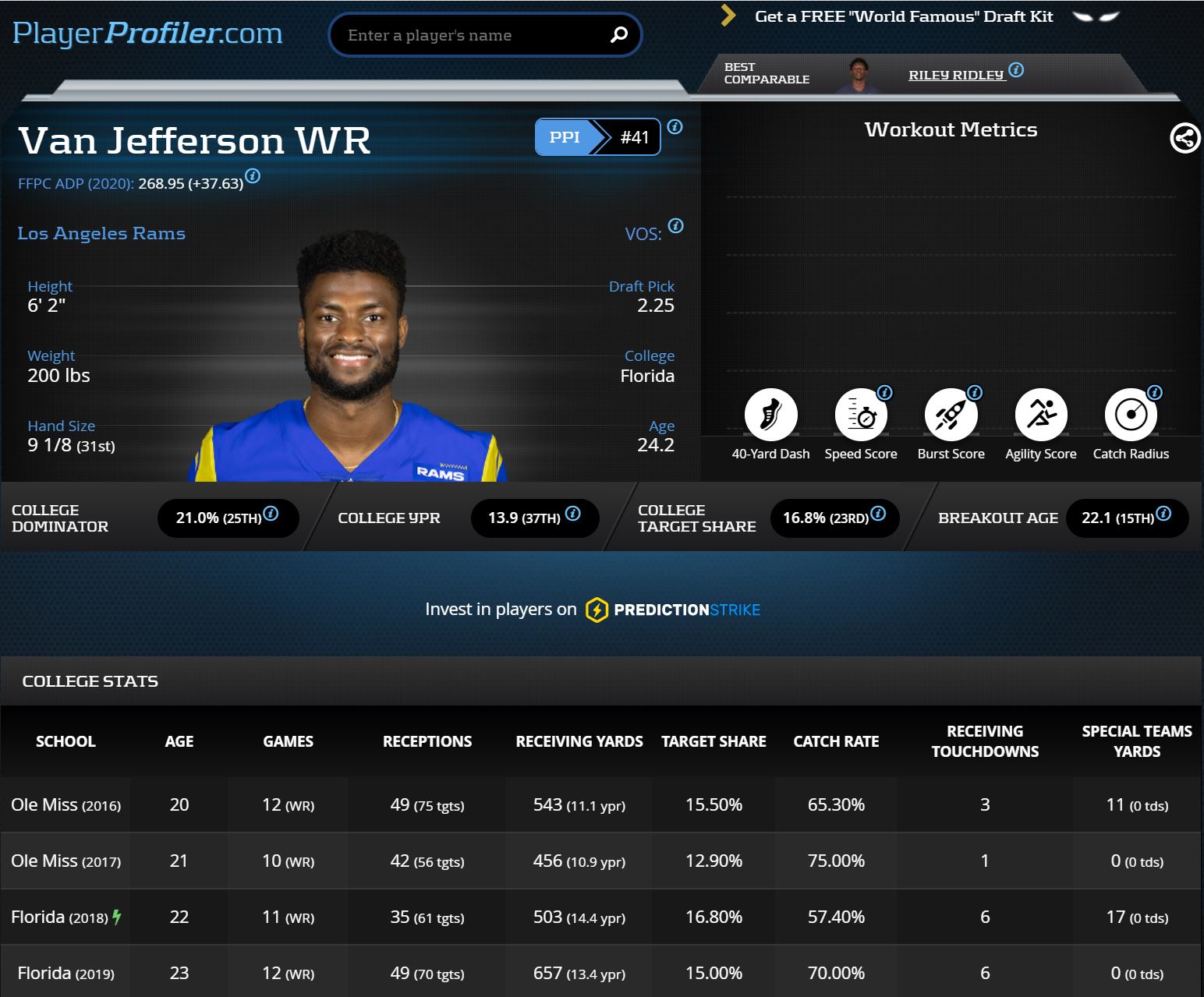 Jefferson’s college production and efficiency metrics aren’t exciting, but his upper-tier route running should translate to early career opportunities. Especially in a game against a Cowboys team that tied for the No. 4 ranked Pace of Play a season ago. The Rams, by the way, ranked No. 3 in that regard. They lost Wade Phillips, their defensive coordinator, along with a number of key defensive contributors from last year. Meaning they’ll likely need to throw the ball a lot to keep up with Dallas’ high-octane offense. If Jefferson can put up big numbers in his NFL debut under the bright lights of Sunday Night Football, he will be among the most popular waiver claims for the coming week. Keep an eye on the status of this game though. Air quality concerns with smoke from prominent wildfires in the area threaten to see it postponed.

Make no mistake, there are no less than a dozen Late Round Tight End Roulette candidates to choose from in a given week for stashing purposes depending on your league’s size and scoring settings. Hell, since this year’s edition came out, #BabyKittle Robert Tonyan and Logan Thomas have overtaken Jace Sternberger and Jeremy Sprinkle as presumed starters for their respective teams. If the main LRTE targets are unavailable, the best tiebreaker when deciding who to stash is the matchup. Cardinals-49ers is a game with sneaky potential to be a fast-paced affair given that San Francisco’s defense is already banged up. This means that Dan Arnold should absolutely be on deep streaming radars.

We already know what Arnold did and how he improved over the three games he played for the Cardinals in 2019. This will be especially important in a year where team continuity will be paramount. We can’t forget about the relatively quick rapport that Arnold formed with his new quarterback. Now consider that Kyler Murray finished as a top 10 fantasy QB in both of his games against the 49ers last year. There’s nothing to suggest that Arizona won’t be among the league’s fastest paced offenses again this season. There are worse players to bet on in fantasy football than a converted WR attached to an Air Raid offense.