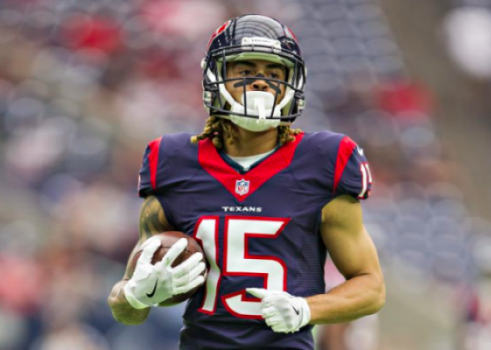 Football is back. The Chiefs beat the Texans 34-20 on Thursday night to officially start the 2020 season. Clyde Edwards-Helaire and Sammy Watkins each scored for the Chiefs, while Will Fuller led the way for the new-look Texans passing attack. While it’s way too early to victory lap in our fantasy football leagues, let’s pinpoint key takeaways from Thursday’s game. Doing this helps fantasy gamers start to form season-long opinions on players.

Before we get started – this is imperative – let’s acknowledge that it’s okay to be wrong about a player that we thought would pop, just like it’s okay to admit we undervalued a player. What we don’t want to do is double down on our false pretenses, ultimately causing our fantasy teams to suffer. With the caveat that these usage rates reflect one game, and we are only starting to form opinions on players, let’s get to the key fantasy football takeaways using PlayerProfiler’s advanced stats and metrics.

Wheels Up For Clyde Edwards-Helaire

Clyde Edwards-Helaire paced the Chiefs backfield with 25 carries. The next leading rusher, Darrell Williams, accounted for seven. Also, there was an Anthony Sherman sighting for one carry on a successful fourth-down attempt. Whereas Edwards-Helaire paced the backfield in carries, he and Williams each had two targets. Williams converted both of his for seven yards. Edwards-Helaire did not record a catch. Still, CEH accounting for 73.5-percent of the team’s carries out of the gate is encouraging. Lastly, his red-zone usage is what we love to see. The rookie back paced the backfield with six carries inside the five yard line. Although he did not convert any into touchdowns, it’s encouraging because they kept going back to him. Meanwhile, he scored from 27 yards out in the first quarter.

Important to note: Williams did not register a meaningful touch, meaning none of his nine touches (seven carries, two catches) came inside the coveted red zone. Obviously, red zone touches increase the likelihood of a player scoring. These are the touches we want our fantasy players to obtain. That said, Williams played on just 23 of a possible 69 offensive snaps. Edwards-Helaire played on 46. That means the rookie had a 66.67-percent Snap Share in Week 1, compared to Williams’ 33.33-percent. Williams is an intriguing handcuff should something happen to Edwards-Helaire. For now, that’s all he is.

Will Fuller Needs to Stay Healthy

Will Fuller paced all Texans pass-catchers in Week 1 with 10 targets. This indicates he is no longer viewed as a one trick pony deep threat. Fuller drew a monstrous 32.2-percent Target Share. For context, only two receivers commanded a 30-plus-percent mark in 2019. One of them was DeAndre Hopkins. Remember, it’s only one game, but good things are in store for Fuller if this target allocation holds up. In addition, he accounted for 51-percent of the team’s Week 1 Air Yards and ran 33 of a possible 40 routes. Fuller’s Route Participation mark in Week 1 was 82.5-percent. This indicates he is not only assuming the role Hopkins left behind, but he’s also still the preferred target on Deep Balls.

Fuller just needs to stay healthy and he will easily put up career marks in receptions, yards, and touchdowns. His talent was never the question. In four seasons, he has missed 22 games. In fact, he has played in 14 or more games in a season just once, though he is healthy for now. Fuller was WR31 off the board, according to FFPC data. With his injury history baked into his ADP, he will pay that off even if he misses time, provided his Week 1 Target Share holds up. Remember, we aren’t expecting to flex the same player for 16 games. The upside with Fuller relative to his ADP is that if he stays healthy, he’s contending for a top-12 finish at his position in fantasy football.

Sammy Watkins again came in hot in Week 1, pacing the Chiefs pass-catchers with nine targets. Travis Kelce, Tyreek Hill, and Demarcus Robinson each had six. This is a mirage. However, if Watkins stacks a few more of these games together, we’re looking at potential Flex appeal. Important to note: Watkins commanded a whole two targets when Houston and Kansas City faced off in the playoffs last season, this after not playing in the Week 6 contest between these two teams.

Watkins converted his 28.1-percent Target Share into a 7-82-1 stat line. In addition, he ran 29 of a possible 33 routes among receivers, which was second only to Hill. His Week 1 Route Participation mark was 87.8-percent. In fact, he nearly doubled Robinson’s 17 routes run. In the offseason, it was reported that Watkins held off Mecole Hardman for the No. 2 receiver job. After one week, it’s impossible to confirm this, but monitor him closely in the coming weeks for signs of a usage pattern.