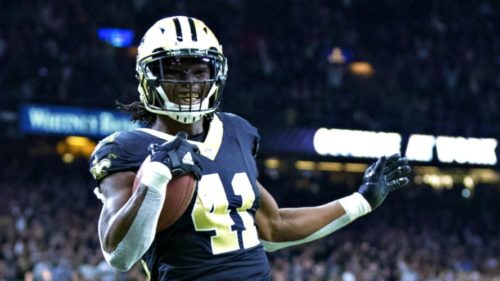 Five weeks into the NFL season, DFS grinders now have a significant data sample to examine ahead of each week. Week 5 was the chalkiest week yet, with Christian McCaffrey, Deshaun Watson and Will Fuller all notching massive scores. Looking to Week 6, advanced stats and metrics point to a few distinct edges we can exploit in this slate of games. Here are a few value plays and GPP targets for the DraftKings’ Week 6 Main Slate.

Finding a pivot off Patrick Mahomes and Deshaun Watson remains hard to stomach. However, Matt Ryan projects to draw significantly less ownership with similar upside. Ryan averages 331 passing yards per game, eclipsing the 300-yard mark in every contest this season. With defensive struggles of their own, Atlanta currently passes at the highest rate in the NFL (72-percent). Even under pressure, Ryan remains superb, recording a 49.3-percent (No. 3 among qualified quarterbacks) Pressured Completion Percentage.

As for matchup, the Falcons face a brutal Arizona Cardinals secondary. The Cardinals have allowed the sixth-most passing yards to opposing signal callers and just cut starter Chris Jones. This leaves Tramaine Brock and Byron Murphy to handle a bulk of the coverage duties. Both corners own at least a 108.3 Passer Rating Allowed in their coverage. With matchup and volume on his side, Ryan provides a sneaky play in GPPs.

Similar to quarterback, finding pivots off Ezekiel Elliott and Dalvin Cook may decide the entire Week 6 slate. Near the top of the pricing totem pole, Alvin Kamara provides just that. Since Drew Brees‘ injury, Kamara averages a 79-percent Snap Share and 16.3 rush attempts per game in the Saints’ offense. He notably retained his receiving role under Teddy Bridgewater with 6.7 targets per contest. As elusive as they come, Kamara ranks No. 1 with 47 in Evaded Tackles, showing the ability to create on his own in this offense.

Looking to Week 6, the Saints hit the road to face the Jacksonville Jaguars. Right now, the Jaguars remain one-point favorites in this contest, suggesting a back-and-forth affair. To open the year, the Jaguars allowed the fourth-most rushing yards to enemy backs (610), including 256 yards to Panthers’ backs last week. Capable of breaking a slate any given week, Kamara warrants consideration in GPPs in Week 6.

Game Script also projects to favor Henry this week. While the Titans enter the week as 2.5-point road underdogs, a close spread indicates a competitive game. Unlikely to face severe negative script, Henry deserves some confidence as a runner in Week 6. With little value on the slate, he provides some salary relief in GPPs.

After a rough start for all Cleveland players, Odell Beckham saw his salary reduced to $6,800 prior to Week 6. While Cleveland struggles to move the ball, Beckham’s target volume remains secure at 8.6 per game. Beckham also continues to create openings for Baker Mayfield in the pass game. Beckham averages 2.19 (No. 8) yards of Target Separation. Also leading the Browns in Air Yards, Beckham is a solid buy low after a terrible outing on Monday Night Football.

While Cooper Kupp has emerged as the Rams’ top wide receiver so far in 2019, Robert Woods enters Week 6 severely underpriced. DraftKings priced Woods at the WR22 at just $5,600. However, his 47 targets this year rank fifth among wide receivers. He also continues to play the most snaps on the Rams’ offense. Last week, Woods’ snap share remained at 93-percent, while Cooper Kupp and Brandin Cooks fell to 67 and 64-percent respectively as the Rams employed more 12-personnel.

Looking at Week 6, the 49ers have improved immensely on defense. As a unit, only New England allows fewer passing yards per game (175.8). However, the 49ers played one of the easiest schedules to open the year, including matches against the Mason Rudolph-led Steelers, Cincinnati Bengals, and Cleveland Browns. Andy Dalton worked his way to 311 passing yards, suggesting some potential regression hitting this defense in the future. Absurdly priced at $5,600, Woods simply remains too cheap for his projected volume.

Heading out of their bye, the Miami Dolphins find themselves matched up against Washington. Despite the disappointing season for the Dolphins, Preston Williams has been a hit as an undrafted free agent out of Colorado State. Williams entered the NFL with poor workout metrics, but a massive 45.3-percent (91st-percentile) College Dominator Rating. Through three games, Williams leads the Dolphins with 30 targets through three games, while owning an absurd 55.6-percent red zone target share.

Williams and the Dolphins now face a Washington defense allowing the eighth-most passing yards (1,386) and the most touchdowns (13) to enemy offenses. Playing primarily on the outside, Williams projects to face Quinton Dunbar and Josh Norman. Norman, in particular, continues to struggle with a 140.4 (No. 41) Passer Rating Allowed in his coverage. With many likely to play Byron Pringle, Williams remains a solid pivot as the Dolphins’ top offensive weapon in Week 6.

An underrated stacking partner with Matt Ryan, Austin Hooper enters Week 6 as DraftKings’ fourth-most expensive tight end, and deservedly so. Hooper has generated 42 (No. 4) targets, 34 (No. 2) receptions and 363 (No. 3) receiving yards. On top of the counting stats, Hooper also ranks first at the tight end position in averaging 2.27 yards of Target Separation, providing Ryan a reliable target downfield.

Hooper also draws the optimal tight end matchup in Week 6. While Arizona remains one of the worst pass defenses in football, they particularly struggle to defend tight ends. So far this season, Arizona allowed the most receiving yards (461) and third-most catches (36) to the tight end position. For those looking to pay down from Travis Kelce, Hooper provides solid value and a cheap price.