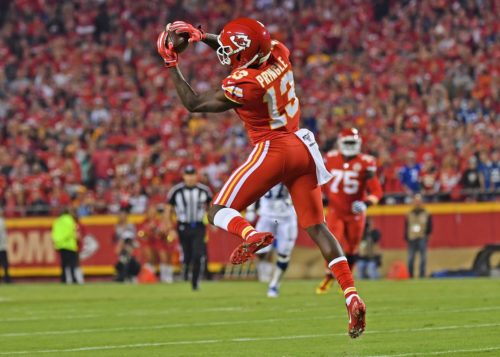 The key to cashing in DFS on FanDuel is to jam in as many of the best plays as possible while punting others. The best way to do this is by identifying “lineup makers.” These cheap DFS options give you the lineup flexibility necessary to afford the best plays on the slate. Here are some lineup makers for Week 6 based on advanced stats, metrics and player profiles.

While other DFS gamers will struggle to navigate the 49ers backfield, sharps will be finding a way to fit Matt Breida into their lineups. He has been showcasing why athleticism matters in athletics, parlaying his 127.7 (89th-percentile among qualified running backs) SPARQ-x score into a 7.7-percent (No. 6) Breakaway Run Rate.

While some might point to him benefitting from the 49ers No. 4-ranked Run Blocking Efficiency, he also owns a 39.7-percent (No. 4) Juke Rate and averages 1.95 (No. 10) Yards Created Per Carry. Breida has a great matchup with a Rams defense that cedes the eighth-most fantasy points above the mean to running backs, making him among the best values on the slate.

This might be the only viable week to play a Miami Dolphins running back in DFS, as they take on the other tanking franchise in the NFL. Kenyan Drake should at least see neutral game script throughout this contest, meaning he should see a bump in carries compared to previous weeks. Drake is also seeing 5.0 targets per game, giving him a solid floor.

He has significantly out-performed Kalen Ballage, who has a 30.0-percent catch rate and averages 1.5 (No. 62) True Yards Per Carry. Expect the Dolphins to gameplan around their dynamic back in his best matchup of the season.

Despite trade requests and clear frustration, the Vikings didn’t put an emphasis on involving Stefon Diggs last week. That should change in this contest against the Eagles, who rank No. 5 against RBs on FanDuel while allowing 2.87 yards per rush. This will force Kirk Cousins into more dropbacks against an Eagles secondary down its top three cornerbacks. We know Diggs has a ridiculous ceiling and can absolutely smash his $5800 price tag.

Larry Fitzgerald sputtered last week against a beatable Bengals secondary, but Kyler Murray only threw for 253 yards. This week Fitz draws Isaiah Oliver and the Falcons secondary, who were exploited by Will Fuller last week. After that explosion, the Falcons now give up the most FanDuel fantasy points to receivers on the season. Christian Kirk is also questionable with his ankle issue. Fitzgerald already ranks No. 6 among receivers with 44 targets, but that usage should rise in a potential shootout with Atlanta.

While teammate D.J. Chark has an NFL-leading 12 deep targets, Dede Westbrook has equaled his 37 overall targets on the season. This week they both face the Saints defense, but have entirely different matchups.

Chark will be operating on the outside against Marshon Lattimore, who shut down a red hot Amari Cooper and completely blanked Mike Evans. Meanwhile, Westbrook will face slot coverage from P.J. Williams, PlayerProfiler’s No. 109-ranked cornerback, who Chris Godwin just dropped a career game on.

It seems that Patrick Mahomes can make anyone great. With Sammy Watkins leaving Week 5 early, the undrafted Byron Pringle from Kansas State finally got a shot and he did not disappoint, hauling in six of nine targets for 103 yards and a score. Pringle has only run 35 routes on the season, but has a 21.6-percent (No. 3) Hog Rate.

With more snaps and the trust of Mahomes, Pringle will continue to pop in this offense. He checks in at the “stone-min” pricing for a WR, making him a staple in any lineup with a potential shootout on the horizon.