On the surface, this might seem like a spot to fade Brady based on the opponent, but this is not the case. Yes, the Saints have been strong against the position (No. 4) but they have also faced some relatively weak opposition. Their opponents, for example, include Geno Smith, Taylor Heinicke, Daniel Jones and Mac Jones. Not exactly murderers row, amirite? Vegas isn’t concerned with the matchup either given the Bucs’ highish 27.5 implied team total (third-highest). Something must break here and I’m giving the edge to the kid with the backwards hat.

Josh Allen checks in as our top ranked quarterback and looks to be it at the position. Priced up to $8,100 (as he should be), Allen is in a fantastic spot facing the Miami Dolphins. The Bills have the slate’s highest implied team total (31.5) and one of the best matchups for quarterbacks to boot. Allen’s 365.5 Air Yards Per Game (second only to the aforementioned Tom Brady) is a nice fit against a Miami secondary, who allow 311.6 Yards Gained By Passing (h/t Pro Football Reference). No clowning around, pair him with his favorite target, Stefon Diggs, who’s seeing a massive 26.4-percent (No. 11) Target Share.

I’m over here chasing points with Joe Burrow like Mike Myers chasing down his sister. Priced over $7,000 for the first time in his young career, many fantasy gamers will fade him because of his big game last week along especially with his price bump. Burrow’s 9.23 Passing Yards Per Attempt (No. 2) and 17 Passing Touchdowns has him firmly in play though. Despite starting the season stout against the pass, the Jets secondary has unraveled, allowing the sixth-most fantasy points to quarterbacks over the past month. To be unique, stack Burrow with Joe Mixon since the Jets have also allowed the second-most receiving yards to running backs.

A pick based mostly on matchup, Teddy Bridgewater is in consideration at $5,400. Bridgewater has shown the ability to rack up enough fantasy points to 5x his cheap salary twice already this season. Bridgewater has impressed with 296.86 Air Yards Per Game (No. 8) and 5 Deep Ball Attempts Per Game (tied for No. 4). Washington is allowing an average of 28.8DKPt per game to quarterbacks.

It’s All For You, Damien

In order for Damien Harris to pay off his $6,100 price tag, he needs to get you at least 100 yards rushing and a touchdown. Luckily, he’s achieved this in back to back contests. The Patriots continue to face poor rush defenses and they now get their shot against the Chargers this week. The Chargers allow 132.3 rushing yards per game (No. 1) with 1.33 rushing touchdowns (No. 2). They also allow a league-high 3.27 Yards Before Contact (h/t RotoGrinders). Harris’ 5 Goal line Carries (tied for No. 5) and 5 Total Touchdowns (tied for No. 4) help highlight his proclivity for scoring.

Fantasy gamers might overthink rostering Harris for fear of point-chasing or his light pass game involvement. Not to worry though as DraftKings awards a 3-pt bonus for 100 rushing yards, which will help compensate for Harris’ limited receptions.

Joe Mixon looks to be light chalk (currently projecting around 10-percent) this week in an attractive game environment facing the Jets. With Mike White expected to get the nod for the Jets, the Bengals should have plenty of opportunity on the other side of the ball. The Jets rank last in aFPA and DKPt (39.7 DKPt/gm) allowed to opposing rushers. They’re also coming off a loss where they allowed four rushing touchdowns to Patriots running backs. In what looks like a lopsided affair, Mixon could easily best his 17.57 Carries Per Game (No. 5) and 77 Rush Yards Per Game (No. 7).

The uncertainty surrounding Nick Chubb‘s injury seems to have scared off fantasy gamers given his low 5.4 projected ownership. His injury is worth monitoring but luckily the Browns play at 1:00 PM ET so his status will be known before kickoff. If he does in fact play he’s a nice leverage play over such backs as D’Andre Swift and Darrell Henderson in a similar price range. The Browns rank first in Run Blocking Efficiency and are the overall No. 1 ranked rushing offense. Even with Chubb and backfield mate Kareem Hunt being banged up, fill-in D’Ernest Johnson was able to put up 27.8 DKPt against the Broncos in Week 7.

Come Play With Us, Jerry

Here’s Jeudy! Well, hopefully! Jerry Jeudy looks to be on track to play Sunday in his first game of action since being injured in Week 1. Although there isn’t much to go on as far as his metrics (for this season) we do know he led all Bronco receivers with a 21.2-percent Target Share in 2020. We also know his opposition this week is playing really bad football. The Football Team allows the most aFPA and 46.7 DKPt/gm to opposing receivers. Jeudy’s return should help move the chains too as the Broncos have had a hard time converting third downs (league worst 29.9-percent conversion). 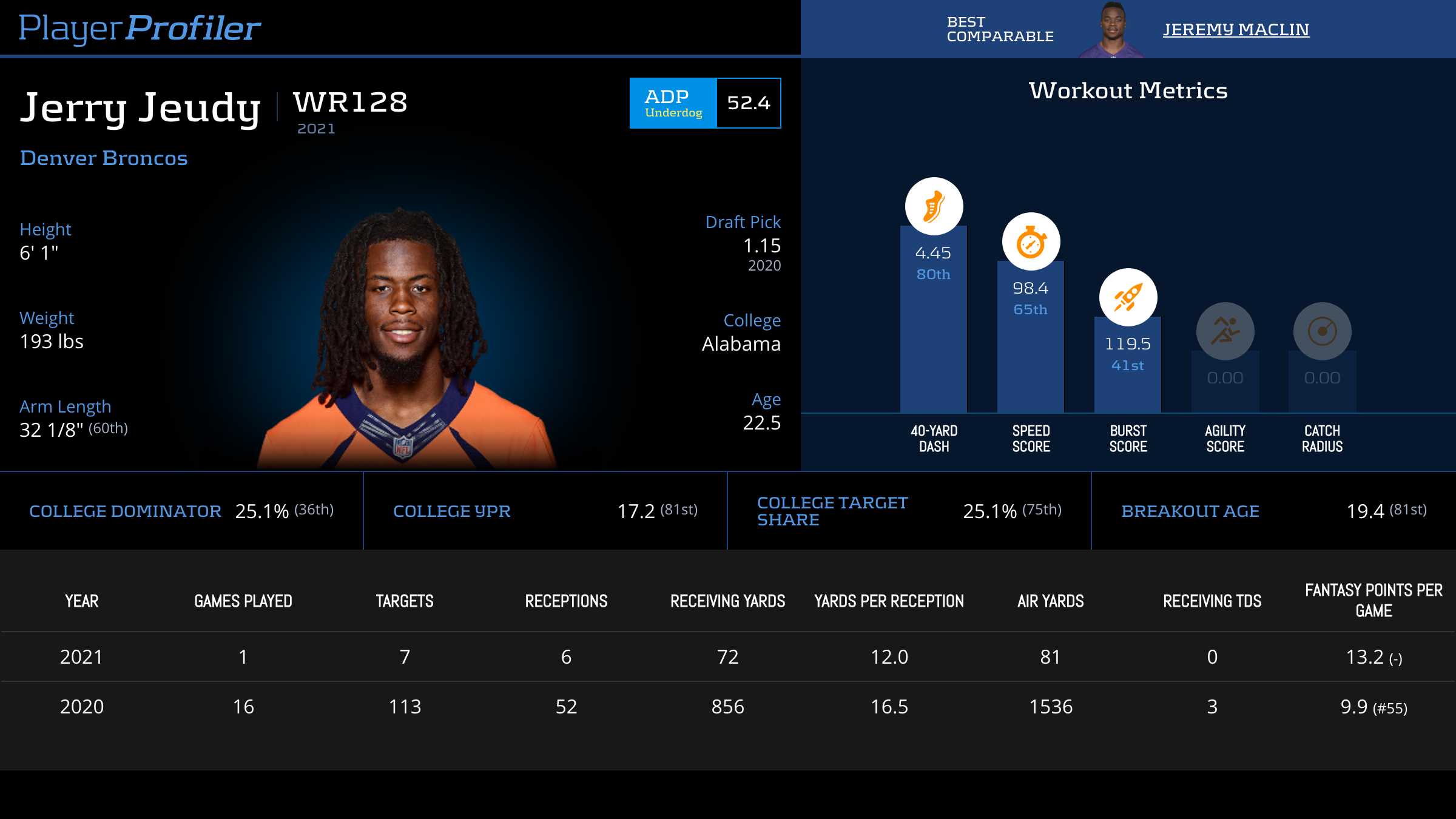 Coming in at under $5,000, he could easily smash his salary with tournament winning upside. Teammate Courtland Sutton is also very much in play with light ownership and a similarly great matchup.

Deebo Samuel has a tighter grip than the Scranton Strangler on this 49ers’ offense. Samuel’s 36-percent Target Share and 43.75-percent Red Zone Target Share are both league best. The next closest teammate in Target Share is George Kittle (21-percent), who is still on injured reserve. The Bears are a nice target for receivers, ranking No. 5 in FPts allowed and fresh off a game where they allowed a hat trick to Mike Evans.

I want to play a game. Name the receiver who despite a 26.36-percent Target Share, 34.21-percent Air Yards Share and 12 Receiving Touchdowns is still No. 3 on his team in projected ownership. What if I also told you that this player faces a defense allowing the most fantasy points (over the past four weeks) to the position and whose team has the highest projected Vegas team total on the slate? Ok, no more games, the player is Stefon Diggs!

With Antonio Brown sidelined in Week 7, Mike Evans and Chris Godwin became the focus for the Bucs offense (25-percent and 28-percent Target Share both tying season highs). A similar game plan should be implemented for Week 8 in a road game against the Saints. The Bucs’ 27.5 implied Vegas (No. 3) total should come mostly through the air as the Saints have been stout against rushers (only allowing 18.3 DKPt per game [No. 3]). The path of least resistance looks to be via the pass as the Saints rank No. 9 in FPts allowed to receivers.  The Brady/Evans/Godwin triple stack is viable with Godwin being the higher owned player.

The tight end position is straight up spooky in Week 8. With Mark Andrews and Travis Kelce off the slate, the best options are Kyle Pitts and T.J. Hockenson. Hockenson is a more spellbinding option based on his $900 discount and similar Target Share. Despite not topping 20 DKPts since Week 2, Hockenson has seen a profane number of Targets recently. His 20 over the past two games rank behind only Kelce. 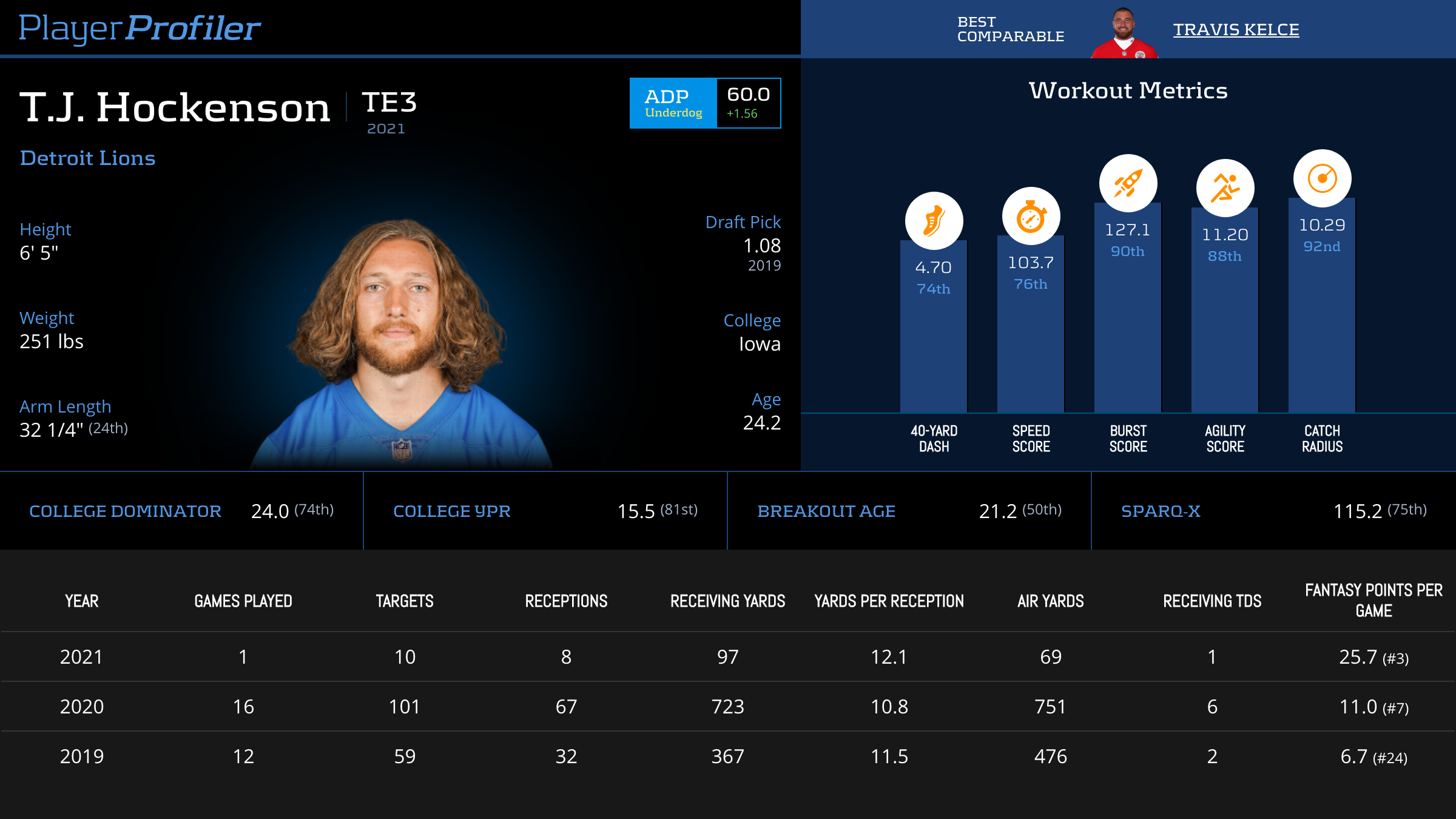 Hockenson’s struggles can be deduced to his lack of touchdown production. In his two TE1 weeks to start the season he was hitting pay dirt. Expect this to change this week while facing an Eagles defense that is tied for the most touchdown passes allowed to tight ends. This is his week to break the spell and find the end zone!

The rest of the tight ends options are interchangeable. In MME, a 12-15 point tight end could be enough to bink. With this in mind, my focus is to spread ownership out but with correlation. For example, Tommy Sweeney will be in play with Allen/Diggs triple stacks hoping for a touchdown. Tyler Higbee and Gerald Everett get the No. 1 and No. 2 best aFPA matchups for tight ends.