Of the top quarterbacks, rostering Dak Prescott makes the most sense in Week 5. The Cowboys are averaging 31.5 Pts/G (No. 4) this season and more of the same (slate-high 29.75 Vegas implied total) is to be expected in this home game against the Giants. In his return from a ghastly ankle injury that sidelined him last season, Prescott seems no worse for wear.

Prescott has tossed ten Touchdown Passes (No. 3) this season, seven of which have come in the last two games. His 78-percent True Completion Percentage (No. 3) is quite impressive as well, especially at a lofty 33.25 Attempts Per Game. The Giants pass defense has been soft, allowing 7 Passing Touchdowns (No. 5) and 23.2 fantasy points per game to quarterbacks (No. 10). It’s time to go back to Dak!

Kyler Murray is hitting the Upside Finder again this week. He has thrown for an impressive 318.25 Passing Yards Per Game (No. 3) while maintaining a league high 85-percent True Completion Percentage. The Cardinals also boast an inflated implied team total of 27.75 (No. 4) hosting the 49ers. The 49ers defense has underwhelmed against quarterbacks too, allowing 24.1 fantasy points per game (No. 7). With Trey Lance expected to make the start for the 49ers, a competitive game looks to be in the cards (not sorry for the pun).

The top aFPA matchup for Week 5 goes to the Tampa Bay Buccaneers. The Dolphins rush defense has allowed an average stat line of 28 rushes (No. 2) for 123.8 yards (No. 3) and 1.25 Touchdowns (No. 2). Leonard Fournette‘s numbers haven’t looked great this season but he’s playing well ahead of Ronald Jones. Though Fournette has yet to hit pay dirt, his 52-percent Red Zone Opportunity Share (No. 5) is encouraging. The Bucs should score in bunches as exhibited by their considerable 29 point implied team total. 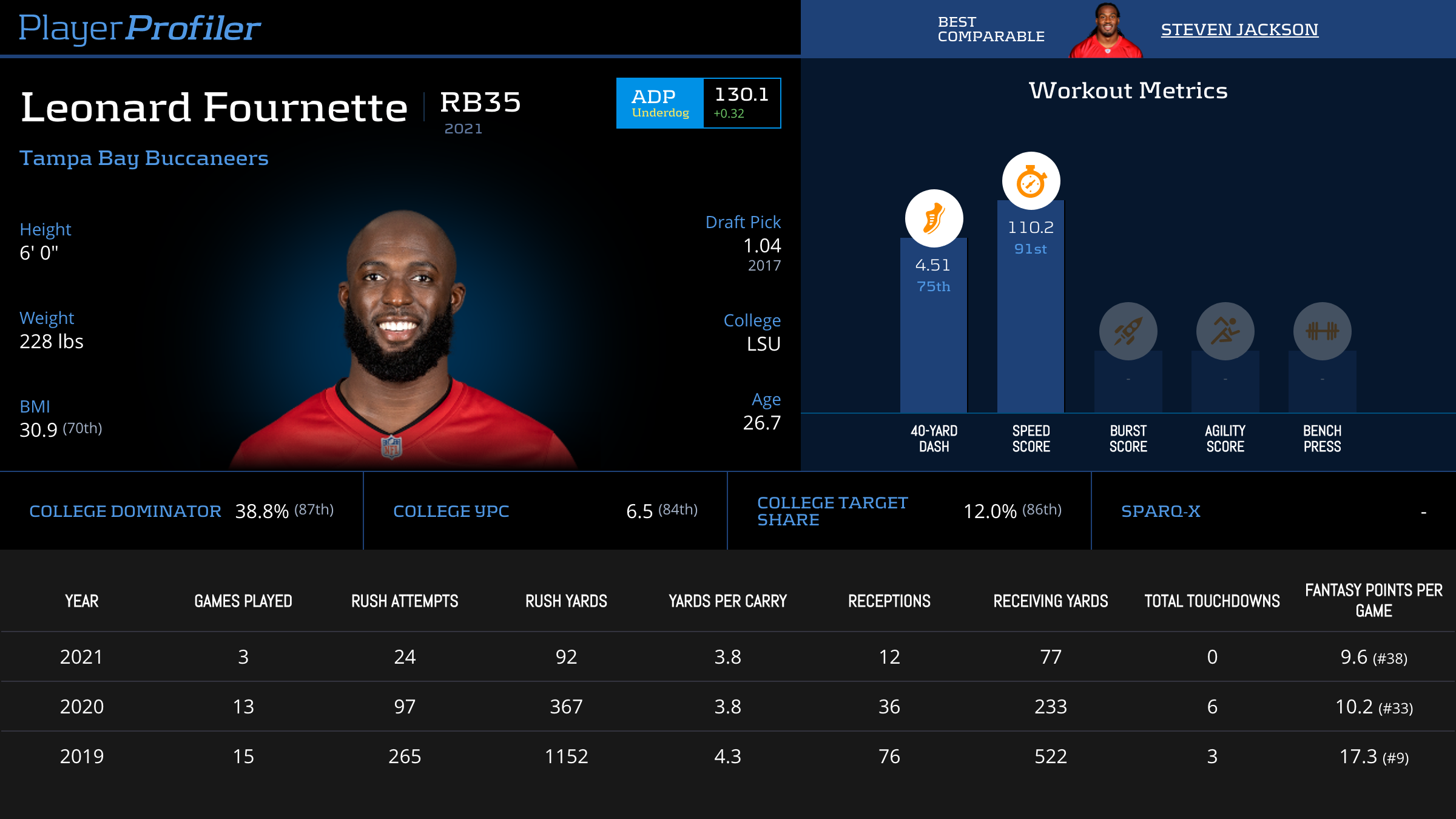 Week 5 is legit setting up as a “stars and scrubs” build kind of week. Derrick Henry is priced up as the most expensive player at any position ($9000) and he’s still very much in play for cash and GPP. He leads all running backs in Carries Per Game (28.25), Rushing Yards Per Game (127.5) and Breakaway Runs (6). The Jaguars rush defense has been disappointing, ranking last in aFPA to opposing rushers. Hopefully, his prohibitive price and the possible return of teammates A.J. Brown and Julio Jones help temper expectations for Henry.

The Browns have earned the most fantasy points by the running back position this season. Kareem Hunt makes for an interesting ($1100) discount from Nick Chubb. Hunt’s 14-percent Target Share is surprisingly more than both Saquon Barkley and Austin Ekeler. Hunt has scored in three of four games and should stay involved with Baker Mayfield and Odell Beckham having no chemistry whatsoever.

With D.J. Chark out for the remainder of the season, Laviska Shenault has become the beneficiary on offense. Through the first four weeks of the season, Shenaults’ highest Target Share was 21-percent. However, the first game after Charks’ injury saw Shenault’s Target Share balloon up to 31.8-percent. His $4800 price along with the soft matchup puts Shenault very much in play. The Titans have been friendly to receivers by allowing a league high 236 receiving yards and 2 receiving touchdowns per game. 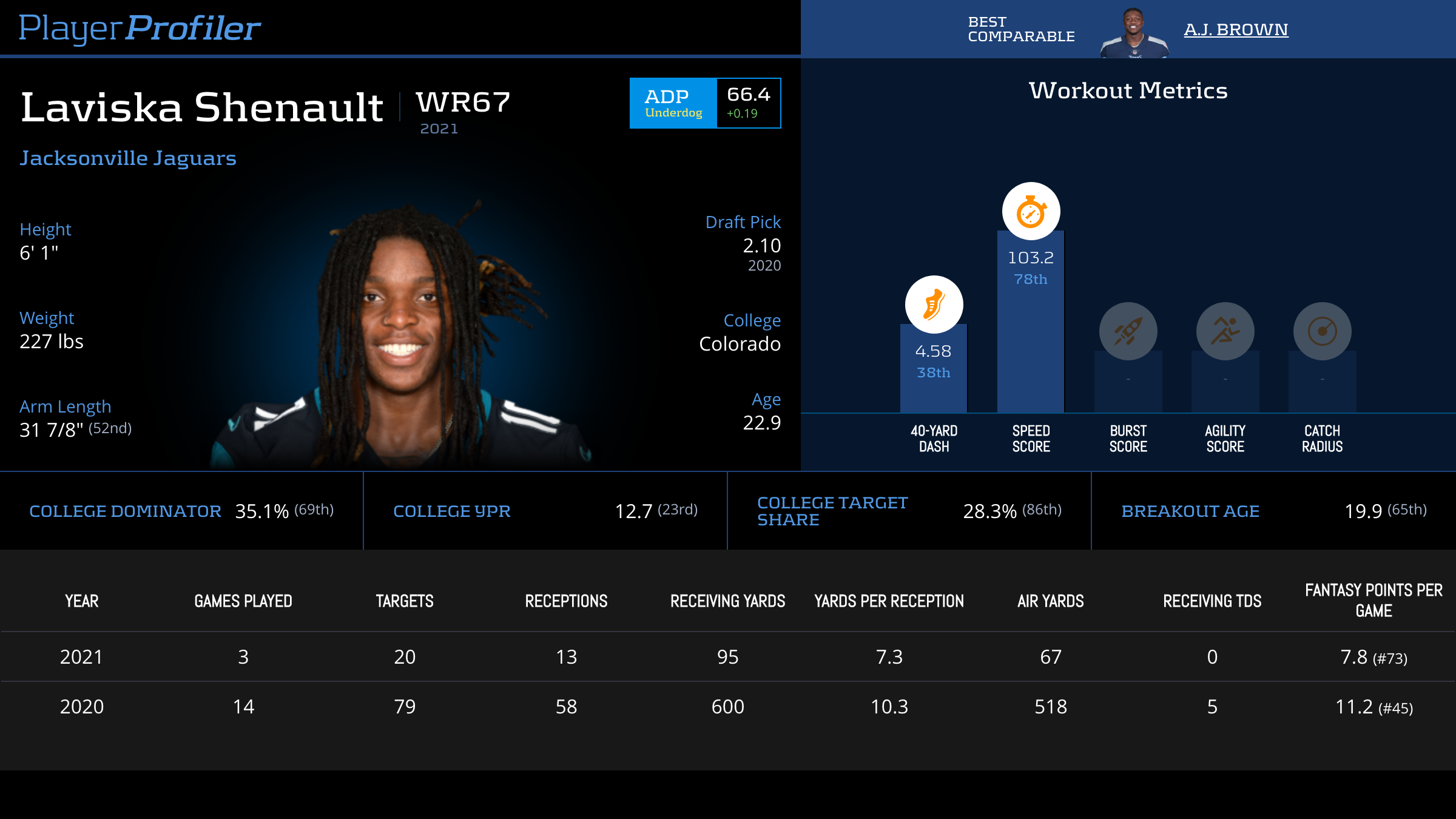 I’d be remiss to not mention why Davante Adams is good chalk this week. Adams projects to be the highest owned wide receiver (20-percent projected ownership) but there is still an edge in overweighting the field in your MME exposure (or prioritizing him in your SE). His 35-percent Target Share (No. 2) and 7.75 Targets Per Game (No. 1) are elite. Adams has hit a 4x ceiling only once (34.2 points in Week 2) in part due to his 1 lone touchdown reception. A multi-TD performance is well within his range of outcomes and what better spot than against the Bengals. The Bengals have allowed the sixth most touchdown receptions to wide receivers.

Terry McLaurin might have the biggest game of his young career Sunday. Logan Thomas was placed on IR, opening up 16-percent of Washingtons’ Target Share. Following the injury, McLaurin stepped up in a big way posting 217 Air Yards (No. 1 in Week 4) and a pair of touchdowns. The Saints defense sets up well for McLaurin too. The Saints have been stingy against the rush, allowing only 19.5 DKPt/gm (No. 7) to running backs yet 24 targets (No. 5) and 15 receptions per game to wide receivers. He’s going completely overlooked as his projected ownership of 3.2-percent is outside of the top twenty.

Dalton Shultz is a nice pivot off the chalky Dallas receivers. The Prescott/Shultz stack is an interesting pairing considering Shultz’ low 6.3-percent projected ownership. Shultz is coming off back to back games seeing Target Shares of 28 and 37.5-percent. He leads all tight ends at 3 Yards Per Route Run and has 3 Total Touchdowns (No. 2). The Giants have allowed the most passing touchdowns (4) to opposing tight ends.

Cameron Brate looks to be a decent salary saver this week at $3300. Rob Gronkowski is considered doubtful with a rib injury that has sidelined him all week. If Gronkowski is ruled out, Brate will again fill that role (the best he can). His Week 4 84 Air Yards and 6 Targets was third on the team behind only Mike Evans and Antonio Brown. Paying down for Brate frees up salary on a week where paying up to be contrarian is very enticing.