From Wentz It Came

The Upside Finder is loving some Carson Wentz this week and I have to agree. He seems no worse for wear after dealing with a double ankle sprain (somehow) earlier in the season. In fact he’s looked sharp as of late, tossing three touchdowns in back to back games. This week, expect more of the same with the Jaguars visiting. 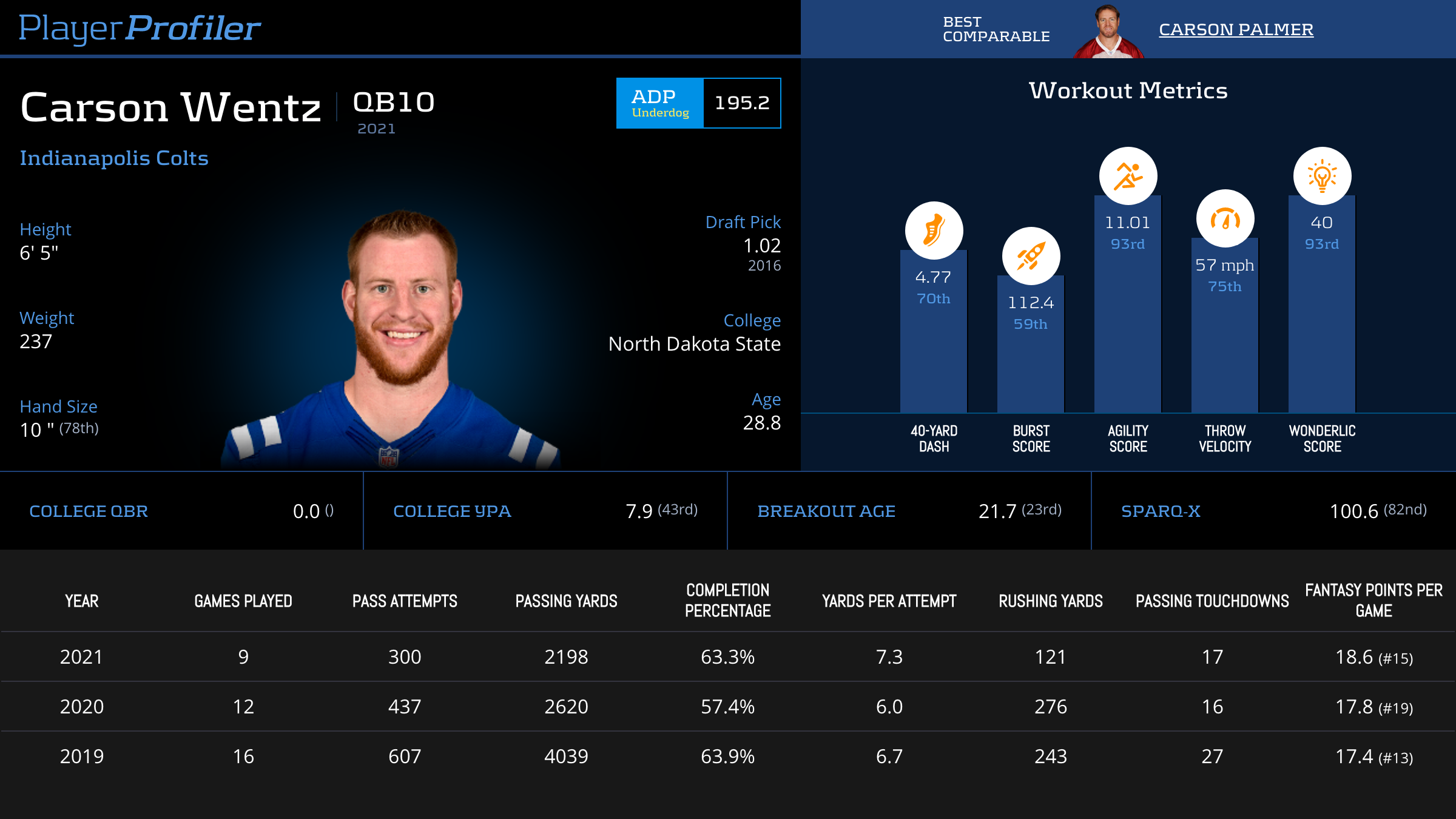 Game-log bros might fade the Colts after seeing the Jags skunk the Bills in Week 9, but don’t be worried. The Jaguars 49-percent Pass Success Rate allowed (No. 3) and No. 32 ranked Pass DVOA is the path of least resistance for a Colt’s team with a high 29 point implied team total (No. 4). The Jaguars are allowing 21.4 DKPt (No. 9) to quarterbacks (which is also our median projection). The Jaguars rank first in Sec/Play so the Colts should look to keep pace (s/o Football Outsiders). Stack Wentz with Michael Pittman with a James Robinson runback to be unique.

If there’s such a thing as a “pass-funnel” offense, this Bucs team is it. With the Bucs opting to run the ball just 32-percent of the time (No. 26), it’s no wonder Tom Brady‘s passing numbers look the way they do. He’s the league leader in Air Yards Per Game (368), Attempts Per Game (42.9) and Passing TDs (25). With a team total of north of 30 and facing a penetrable pass defense in Washington, it’s not hard to determine where the fantasy points will be scored in this one.

Brady to Godwin. Tampa’s on the board! #GoBucs

For as good as the Bucs have been in the passing game, the Football Team has been equally as bad defending the pass. In fact, the area of the field where the Buc’s tend to operate is the glaring weakness for Washington. Washington ranks last in Pass Rate on intermediate passes (10-19 yards downfield) which is where the Bucs like to work (22-percent pass rate to this area of the field). 78-percent of the Bucs offensive scoring (No. 3 Pass TD %) comes via the pass which is where Washington has really struggled (74-percent of scoring by Pass TD is No. 4 worst).

For these reasons, Chris Godwin (monitor his foot injury) is the logical pairing for your Brady stacks.

With Dak Prescott expected to be popular, Matt Ryan makes for a nice leverage play. In his first game without Calvin Ridley, Ryan looked unfazed while posting his highest fantasy score of the season (31.5 DKPt). This Falcons/Cowboys game has both the highest game total (55) and is No. 1 ranked in Pace of Play (s/o Football Outsiders). The Falcons’ rushing ineffectiveness has tilted the scale in favor of passing as evidenced by Ryan’s high 37 Pass Attempts Per Game (No. 7). One pairing for Ryan is Cordarrelle Patterson: as Patterson’s pass game chops have been used in lieu of a true rushing attack.

The Vikings/Chargers game is the other high total (53) pace up game to consider (No. 3 Pace of Play). Both offenses are worthy of stacking with Kirk Cousins and Justin Herbert both leaders in Attempts Per Game (38 and 40 respectively). The double stacks are fully in play here as well with each teams WR duos accounting for close to 50-percent of their teams Target Share. All things considered (depressed ownership mostly), my lean is to go with a Mike Williams Charger’s skinny stack with a Justin Jefferson runback.

With Nick Chubb (reserve/COVID-19) and Kareem Hunt (IR) expected to miss Week 10’s meeting with the Patriots, D’Ernest Johnson again finds himself as the team’s only healthy running back. Johnson delivered big in his primetime break-out putting together an impressive 22/146/1 stat line against the Broncos. Whether he can repeat this magical performance remains to be seen but his workload should be comparable. 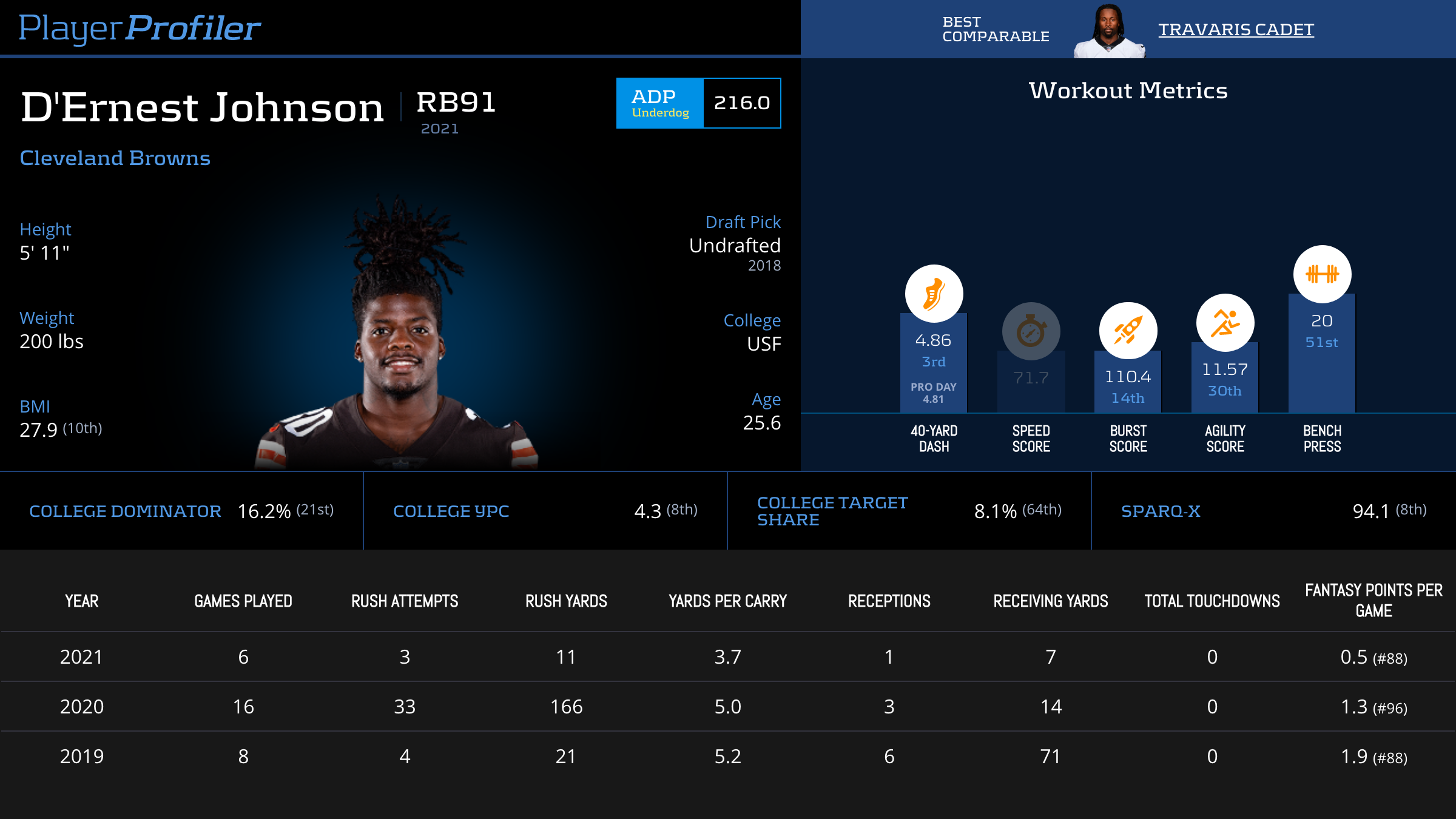 In his Week 7 spot start, Johnson saw 24 Opportunities (No. 3) and accounted for 168 yards (No. 3) in a meeting with the Broncos. At just $4,700, this kind of usage mustn’t go overlooked. No team accrues more fantasy points from the position than the Browns. PFF likes the Browns rushing attack too given their 66-percent OL/DL matchup advantage in the trenches (No. 4 best). Johnson’s light pass-game usage may deter gamer’s from rostering him in a perceived bad matchup against the Patriots. The Patriots, however, have quietly allowed the fifth most fantasy points to running backs over the past month.

My interest in the Cowboys begins with Ezekiel Elliott this week. After finishing last week’s dud with a snowflake next to his player card, the going should get easier with a visit from the Falcons. The Cowboys rushing attack should bounce back in a big way facing the Falcons No. 27 ranked Rush DVOA. When the Cowboys are leading by seven-plus points they opt to run the ball 59-percent of the time (No. 3). Vegas likes the Cowboys to keep a lead given their -8.5 point spread.

Najee Harris will surely be chalky given his workload but deserves a mention nonetheless. The rookie’s accolades include 18.75 Carries Per Game, a 87.3-percent Snap Share and an 89-percent Opportunity Share (all top three at the position). Ultimately we’re getting a running back who is always on the field and always involved. The Lions have allowed the third-most DKPt to running backs (31.2 DKPt/avg) and rank No. 2 in aFPA to the position. Lock and load the rookie in cash and tournaments.

Life is Precious, and Godwin and the Bible

At just 8.9-percent projected ownership, I’ll easily overweight the field on Chris Godwin assuming he plays. With Antonio Brown sidelined, Godwin has seen a significant bump in production including back to back 100+/1 stat lines. 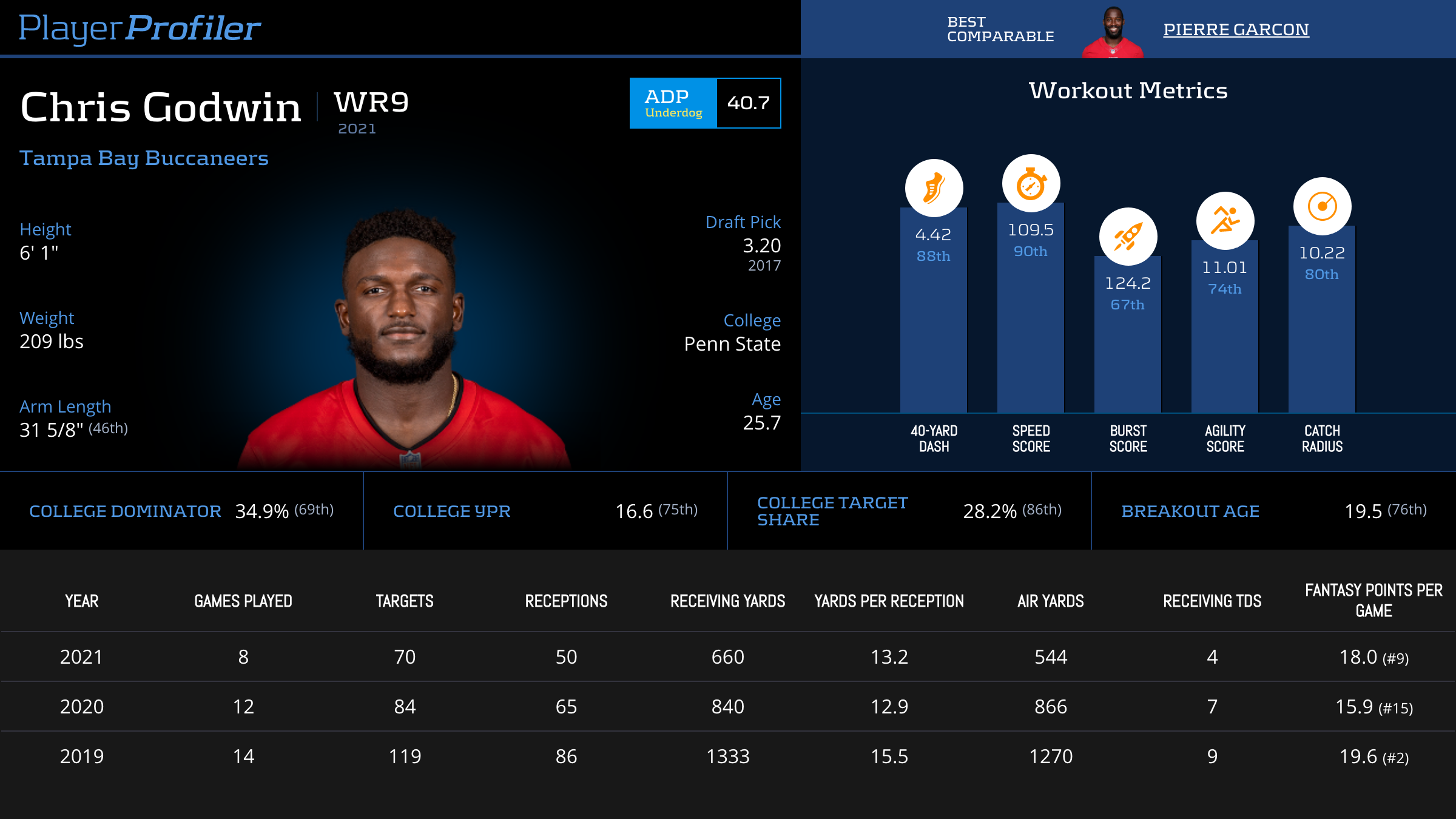 Godwin gets the PFF No. 1 graded WR/CB matchup facing the Football Team defense. This grade makes sense as the Football Team ranks last in aFPA to wide receivers while the Bucs passing offense ranks No. 1 (RotoGrinders Power Rank). The issue here is his foot injury that has caused him to miss practice all week. He plays in the early set of games though, so we’ll know ahead of time whether to pivot. If he goes, he’s near a lock play given the matchup and game total (30.5). If he misses, Mike Evans is a very strong play.

At $5,000, Russell Gage is in play in a pace up spot against the Cowboys. Working as Atlanta’s top receiver sans Calvin Ridley, Gage saw a season high 81-percent Snaps and a team leading eight Targets in Week 9. The Cowboys have been beatable on the backend ranking No. 10 in aFPA to wide receivers. As 8.5 point road dogs, expect the Falcons to pass early and often.

Fantasy gamers are rightfully frustrated with Stefon Diggs‘ lack of fantasy production but he’s in play regardless. Vegas got smoked last week but will always win in the long run. Vegas likes the Bills to put up a lot of points on the Jets and I’m here for it. In the No. 2 graded WR/CB matchup PFF Grades as excellent, what could possibly go wrong? Diggs leads the Bills with a 24-percent Target Share and 10 Targets Per Game. Be a week early rather than a week late on the Diggs breakout.

The tight end situation is grim this week. With Kyle Pitts as the priciest option at $5,800, it’s really just a punt kind of week. Rob Gronkowski at only $4,400, would have been the premier play if healthy enough to suit up. Denver’s Noah Fant gets the primo tight end matchup of the week. The Eagles have allowed the No. 2 aFPA to tight ends. Missing Week 9’s game after testing positive for COVID-19, Fant looks ready to return. Fant has flashed upside with a 24.7 DKPt performance against the Raiders in Week 6. He’s a boom or bust play that is worthy of your MME.