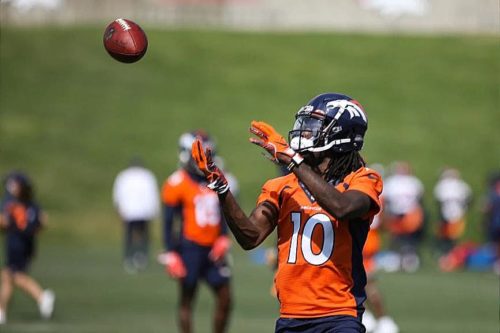 Now past the quarter mark of the season, the NFL rages on through a pandemic and all. Week 4 saw another running back land on injured reserve, while a star wideout reaggravated his hamstring. Yet, the injury list isn’t as heavy as recent weeks; though now it would seem COVID-19 is ready to make its mark on the 2020 season, causing the NFL to play musical chairs with the schedule. Eeesh.

However, it isn’t all doom and gloom; several players return to lineups this week. Cam Akers will be back for the Rams and Phillip Lindsay returns for the Broncos. Not to mention, the Steelers are finally playing again (it’s been a minute, Diontae Johnson). The NFL might be entering a point of turmoil, but nothing will deter The Infirmary!

It was anticipated that Austin Ekeler would hit injured reserve, but the Nick Chubb injury was a big blow this past weekend. A Joshua Kelley/Justin Jackson combination will handle duties in Ekeler’s stead, and Kareem Hunt will be the top guy while Chubb is away. Many are hopping on the D’Ernest Johnson hype train, but Dontrell Hilliard has the better player profile and is much easier to acquire. Hunt is the smash play, Hilliard the lottery ticket.

With Sony Michel now officially on IR, Damien Harris becomes a top option. Yes, James White is there and Harris garnered zero receptions in his first game back, but the lead runner for the Patriots is a good player to roster.

A preseason “sleeper” darling, Steven Sims also headed to IR after a disappointing start to the season. Perhaps the Washington offense will be improved upon his return.

In what has become rather routine for the Eagles, they will once again be short handed at wide receiver (and tight end, for that matter). Sure, Zach Ertz will get his, but another receiver needs to step up. Greg Ward has been solid, but nothing spectacular in his run as the top guy. The interesting name here is Travis Fulgham. Promoted from the practice squad, Fulgham stepped in and made two big catches last Sunday. Monitor this situation.

The Broncos continue to pile up the beaten bodies, with K.J. Hamler the next man down. Though Tim Patrick has played well with the opportunity afforded to him, Jerry Jeudy is the receiver to roster.

In other new, the Bryan Edwards breakout performance will continue to be delayed, while Sam Darnold gets a break from getting tossed around the football field.

Again with the Broncos. Yet, they are in better shape then the Jets, who will now lean on veteran quarterback Joe Flacco. Even if Le’Veon Bell returns this week, the chances of Flacco holding up any better than Sam Darnold did are slim to none. Or maybe just none.

According to multiple reports, it appears that all three questionable Baltimore players will be available come Sunday. That’s great news.

On the other side of things, Julio Jones doesn’t appear likely to be ready for the matchup against the Falcons, despite being considered a game time decision. Look for Calvin Ridley to bounce back whether Jones plays or not, but Olamide Zaccheaus may be in for another big day should the Pro Bowler sit out. Remember where you heard that name first.

Joe Mixon will be fine, as will Julian Edelman, who continues his ritual of weekly questionable tags.

It would be nice to see Henry Ruggs back in action, and the Raiders offense can use his assistance. The threat of his speed alone is enough to make defenses pay attention.

If Drew Lock returns, he’ll do so to a depleted receiver group; don’t sleep on Jerry Jeudy going bananas over the next few weeks (Monday’s game aside).

The 49ers are looking to get healthier, and Raheem Mostert may soon join Jerick McKinnon in the backfield. While this may mean a decline in snaps for McKinnon, he can still excel in a timeshare role with Mostert. Have no fear.

Deebo Samuel returned in Week 4, catching three passes on three targets for 35 yards against the Eagles. He’ll have to pass another round of COVID tests to be available Sunday, but he will be of great help to the returning Jimmy Garoppolo should he do so.

In New Orleans, the Saints and Drew Brees look to get back a couple of their playmakers in Michael Thomas and Jared Cook. If either player (or both), miss the game, Tre’Quan Smith can safely be fired up again.

Tuesday feels an eternity away, so A.J. Brown’s situation needs monitoring through the weekend. Due to the COVID outbreak within the team, the Titans star wideout hasn’t been able to practice. Should he suit up on Tuesday, he’d be one of the few offensive weapons to do so. Who’s up for some ugly Tuesday night football?