As the 2021 fantasy playoffs approach and draft season becomes but a distant memory, I wanted to dredge up the most heated debate from the preseason and look at the current standing of Zero RB drafters against Hero RB drafters. To dive into this, I broke players down into two different sections for comparison. Running Backs and Wide Receivers/Tight Ends with an ADP Rounds 1-3, and then the same positional groupings with an ADP in Rounds 4-7.

Within these two sections I’m looking at the average Fantasy Points Per Game (FPPG), Value Over Stream (VOS) and to combat the Zero RB’s “top argument” of fragility, the games played.

By taking a glance at the players in Rounds 1-3, there is a good chance that fantasy players walked away happy with their choice. The average FPPG is only a difference of two points in favor of the running backs. However, when I took a closer look into the individual players that made up this list, I found that there were more running backs that hit, and they hit much harder than their wide receiver counterparts. 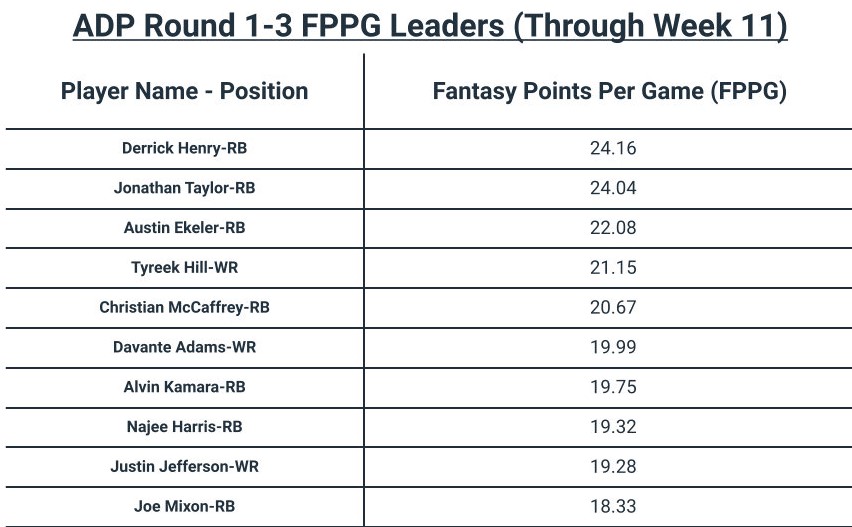 Of the 16 running backs chosen in the first three rounds, 11 players (69-percent) have scored more than 15 FPPG and even more smash-worthy are the four players (25-percent) that are scoring over 20 FPPG. Comparing this to the 18 wide receivers chosen within the first three rounds, I found that there was a slight dip in players producing over 15 FPPG with only 10 players (56-percent) hitting the threshold. In addition, only two of the players (11-percent) have been able to crack the 20 FPPG mark on the season (Tyreek Hill and Davante Adams just barely squeezed by with some help from rounding).

For the drafters that did decide to forgo Christian McCaffrey and Jonathan Taylor early, I wanted to look at the performance of the running backs in Rounds 4-7 to see what Zero RB drafters ended up with to start the season. I also wanted to see how the mid-round receivers stacked up against the early round receivers and determine if there was a true advantage in targeting the wide receiver position hard and early in drafts. 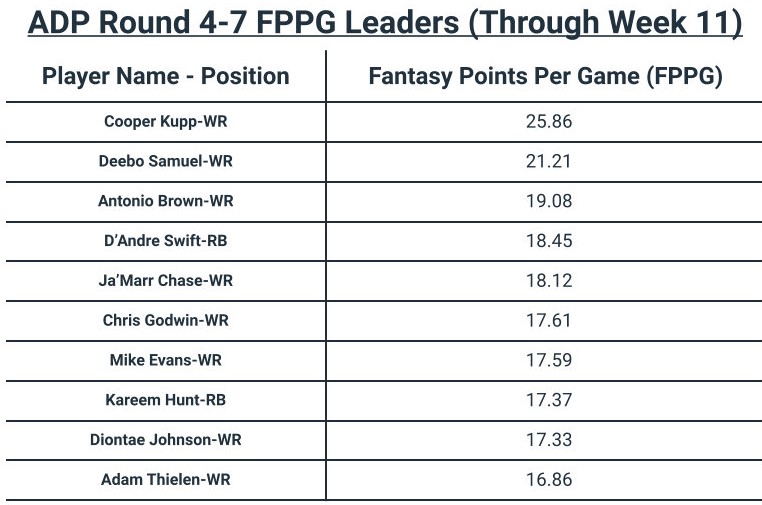 In this mid-round group of running backs there were 13 that fell into Rounds 3-7, and 28 combined wide receivers and tight ends. The average FPPG and VOS dipped, as to be expected, as players in these rounds are not held to the same level as the early rounders.

There are the obvious mid-round smashes of Cooper Kupp (25.86 FPPG) and Deebo Samuel (21.21 FPPG) leading this charge posting over 20 FPPG and outscoring the top two receivers taken this year of Tyreek Hill (21.15 FPPG) and Davante Adams (19.99 FPPG). When comparing the mid-round wide receivers/tight ends to the mid-round running backs, the better selection more times than not was to dodge the running backs and go with a receiver. Lowering the performance expectations to view 17 FPPG as smash-worthy, there were nine wide receivers and tight ends (32-percent) posting over 15 FPPG and seven in the group (25-percent) putting up over 17 FPPG. Looking at the running backs, it’s nowhere near the level of the receiving options as only three of the 13 (23-percent) are scoring over 15 FPPG with D’Andre Swift and Kareem Hunt (15-percent) breaking the 17 FPPG barrier.

Just looking at these two data sets side by side in terms of FPPG, it was clear to me that the Hero RB drafters came out of the draft in a better place than the traditional Zero RB drafters. Obviously, this isn’t a blanket statement as a Zero RB team could have hit on Tyreek Hill, Justin Jefferson, Keenan Allen and then kept it rolling with Cooper Kupp in the fourth. The odds of that team existing are slim, and two running backs still need to be started in a traditional league format.

Looking at the hit rate between the two sets of data, the odds are higher that a fantasy manager who selected at least one running back in the first three rounds and then drafted their starting wide receivers in the fourth through seventh rounds is faring better than a manager who took the inverse route of drafting their starting running backs in the fourth through seventh rounds.

Beyond the Fantasy Points

I didn’t want to only analyze the raw fantasy points produced by these “high value” players. I also wanted to look at the opportunity cost of leaning one way or the other when it came to positional value. As The Podfather has said time and time again, running backs typically provide more Value Over Stream in comparison to wide receivers. Meaning, it is much easier to find and plug in a wide receiver into fantasy lineups from the waiver wire/free agent pool on any given week. The data proves to be the same in my analysis where the average VOS of the early round running backs is over 2.5 points higher than the wide receiver and tight end grouping (5.72 and 3.23 respectively).

While the players drafted in Rounds 4-7 are closer in terms of VOS, the running backs still hold more value than their waiver wire replacements averaging a VOS of 2.03. The receivers and tight ends average a VOS of only 1.67. Due to the sheer depth at the wide receiver position, and the lack of clarity from the running back depth charts in today’s NFL, running backs will always have more positional value and carry a higher VOS. For more information on VOS and how it is derived, take a look at this article from the Podfather himself.

The top argument that I heard from analysts that are still desperately clinging to the idea of Zero RB, is that running backs are too fragile and can’t be trusted to stay on the field to give fantasy teams 20-plus FPPG. I wanted to see if that held true this year or if missing football games is just an impossibility to accurately predict and fantasy players should just draft the player that CAN give league winning production. Unsurprisingly, at least to me, there is only an average of a one game played difference between running backs and wide receivers/tight ends in both Rounds 1-3 and Rounds 4-7.

Looking even closer: Out of the 13 early round running backs, five (31-percent) have played less than five games or landed on IR at some point in the season (Derrick Henry, Christian McCaffrey, Saquon Barkley, Clyde Edwards-Helaire, and David Montgomery). We see a similar rate on the early round wide receiver side as four players (22-percent) have played less than five games or suffered a season ending injury (Calvin Ridley, Robert Woods, A.J. Brown, and George Kittle). The serious injury rates were a bit wider in regards to the mid round players as five of the 13 running backs (38-percent) fit this category, while the wide receivers/tight ends carry over a similar 21-percent with six of the 28 players missing extended periods of time or being lost for the season.

In digesting those rates, the difference is so minute that there is no striking difference in fragility. All players on a football field are susceptible to injury when playing such a fast and violent game. I am not going to worry about drafting players that are equally healthy in the preseason because they MAY get injured playing in season.

If there is an injury prone player with a history of specific lower body injuries then it definitely will factor into decision making, but at the end of the day I’m going to take the player who will score the most fantasy points.

From how this season has gone, I can say that Hero RB set up fantasy managers with a better roster construction compared to Zero RB. Luckily for those who missed the boat on the early round studs such as Jonathan Taylor and Austin Ekeler, the fantasy football season isn’t won or lost at the draft. There are many weeks for waiver wire adds and trades to change the tide of a league. While Hero RB gives a slight advantage, what I have taken from this thought experiment is to not lock into a specific draft strategy. Take the draft room as it comes and capitalize on players that fall. Keep the good process of drafting good players and good things will happen.