Terry McLaurin makes his season debut on the Air Yards Value Index. He is coming off a game where he failed to crest double digit fantasy points against a exploitable Seattle secondary. While his matchup this week against the Raiders is less appealing, McLaurin should continue to see copious volume in Washington’s offense. He is averaging 111 Air Yards on the season and is tops in the league in Air Yards Share.

Brandin Cooks is no stranger to the Air Yards Value list making his sixth appearance this season. Since Tyrod Taylor’s return as starter in Week 11, Cooks is averaging 76 Air Yards and seven targets per game. He has finished as a WR2 in two of those three games but is seeing the type of volume that would allow for WR1 finishes. Cooks is a recommended play in all formats against a Colts secondary that has let up some big fantasy performances from multiple wide receivers.

Elijah Moore failed to mesh well with Zach Wilson last week scoring his least amount of fantasy points since Week 5. It had been quite a run for the rookie receiver without Wilson in the lineup as he has posted multiple WR1 finishes during that time. There should be no reason why Moore can continue this streak with Wilson throwing him the football. Look for him to rebound this week. Additionally, if Corey Davis is forced to miss the game, Moore’s ceiling raises even higher.

Kenny Golladay‘s inaugural season in New York has been one to forget. He has failed to finish as a WR1 on the week so far this season and is averaging only 7.5 Fantasy Points Per Game. However, Golladay is coming off a seven-target, 95 Air Yard outing, two figures that exceed his season averages in those stats.

One of the few healthy starting skill position players left on the Giants, Golladay should be peppered with Air Yards and targets again this week and should be a budget saving option in cash games despite a tough matchup against a resurgent Miami defense and the looming specter of Mike Glennon as his starting quarterback.

Odell Beckham appears fully up to speed on the Rams offense. Last week he posted a 94.8-percent Snap Share, running 39 routes, seeing 10 targets. He finished as the WR9 on the week scoring 19.1 fantasy points. These were all season highs for Beckham. A hip injury has limited him in practice this week and is something to monitor regarding his week 13 availability. Assuming he is able to play, he is a recommended play in all formats.

Sammy Watkins has been in a full blown wide receiver rotation with Rashod Bateman since his return from a soft tissue injury. However, Bateman has vastly outproduced Watkins since the veteran receiver’s return, seeing 10 more targets since Week 10. However, the two receivers have both seen 122 Air Yards during this same time.

Priced at $500 less than Bateman, Watkins is a contrarian way to get exposure to the Ravens offense that could exploit a sub par Steelers secondary.

Bryan Edwards is what he is at this point in the season. He is low target volume, high average depth of target wide receiver that can occasionally post a boom week. 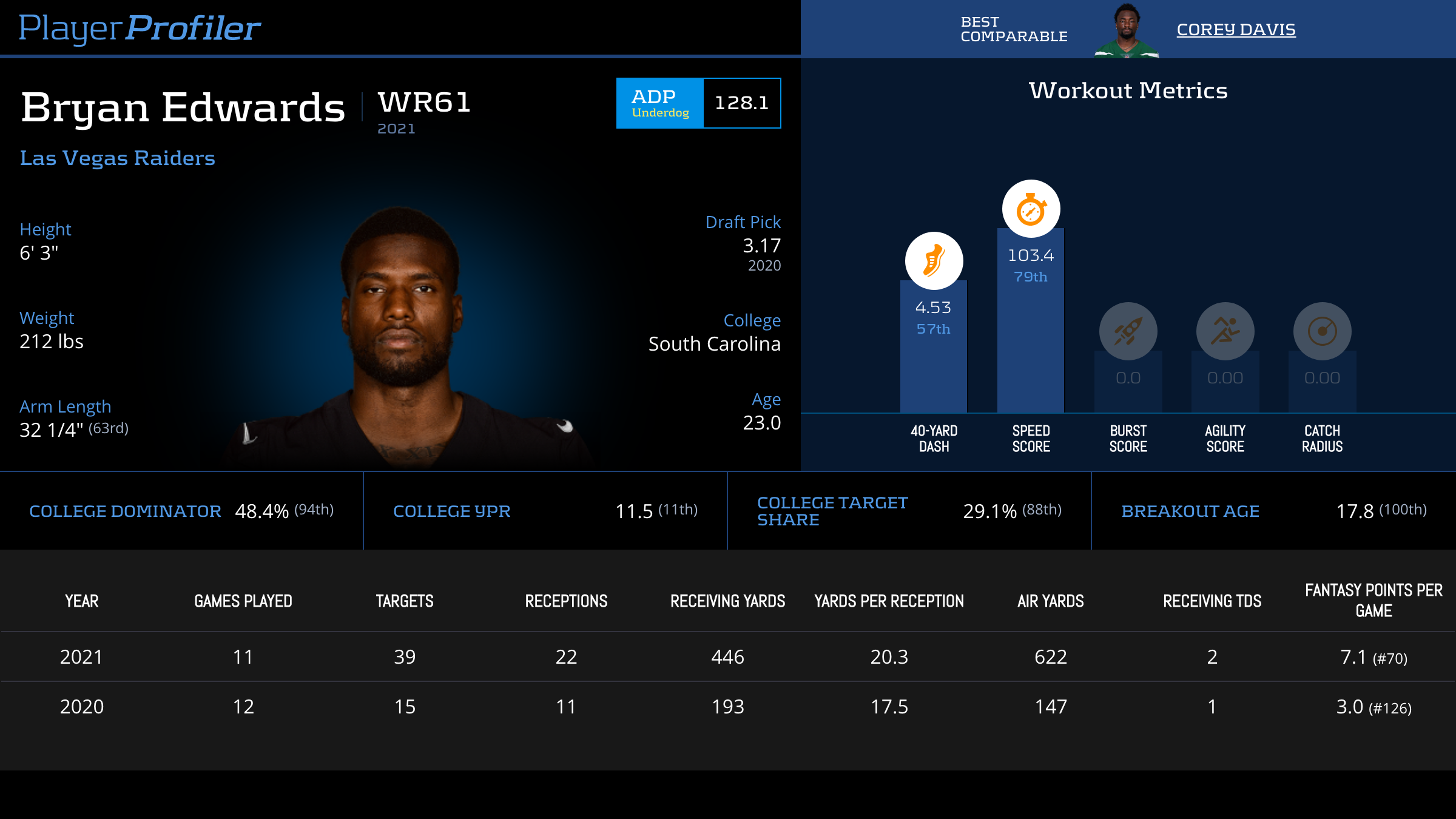 Edwards should be occasionally sprinkled into tournament entries every week.

Van Jefferson led the Rams with 170 Air Yards in Week 12. He has also failed to see less than 81 Air Yards the past five games. With this type of usage, Jefferson has the potential to post a WR1 week, a mark he hasn’t hit since week four.

In DFS, TB and LAR are your MANDATORY double stacks each week

I took down a Yahoo DFS tourney with Stafford in Week 12 👀https://t.co/4KsiLxLAmf

At only $5,300 Jefferson is the cheapest of the fantasy viable Rams receivers and should be in lineups across all formats regardless of Odell Beckham‘s Week 13 status. He should be viewed as chalk if Beckham is forced to sit.

Devante Parker looks to return in Week 13 after missing the past five weeks. He should slide back into a very fantasy friendly role on the Dolphins offense as he has averaged 100 Air Yards per game and 12.7 fantasy points per game. If Parker is taken off the IR in time for Week 13, he is a must play in all formats in light of being priced under $4,000.

Corey Davis aggravated his groin in practice last week and was unable to get healthy for the Jets’ Week 12 game. He has yet to practice this week but reportedly feels better. Assuming he is able to play, Davis would a recommended play in all formats as he is averaging 90 Air Yards per game on the year as well as double digit fantasy points.

Marvin Jones hasn’t posted more than double digits fantasy points since Week 6 when he finished as the WR9 posting 23 fantasy points. However he has averaged over 6 targets per game and seen at least 50 Air Yards per game since this time. With the Jaguars likely playing catchup against a high powered Ram offense, Jones makes for a great run-back option in Week 13 if you are stacking Rams in your tournament lineup.

Good luck to everyone in Week 13. May all your Air Yards be realized.