The Dynasty Market Movers covers the biggest and most intriguing risers and fallers on PlayerProfiler’s weekly updated dynasty rankings. Another week of NFL action yielded plenty of dynasty market movement. Congrats to those who survived Week 15 match-ups and good luck in the semi-finals. In a chaotic season where many big names are absent from action, here’s the Week 15 movers report.

Despite back-to-back losses, second-year back-up Tyler Huntley has filled in respectably for the injured Lamar Jackson. In the last two games, Huntley has completed 70.5-percent of pass attempts, producing 485 yards, zero interceptions, and three touchdowns. Armed with dual threat ability, Huntley has ran for 118 total yards and two rushing scores over this stretch.

The hunt is on for NFL teams to find their own Huntley🔍 pic.twitter.com/7tXjhfY0uF

Going by the nickname ‘Snoop,’ Huntley’s fantasy production hasn’t been too shabby either. Against the Green Bay Packers, he delivered a 35.9 fantasy point performance to finish as the QB1 for quarterfinals week – that’s a solid day of work. Huntley’s showing the NFL that he can play. An ERFA this offseason (the Ravens will most likely retain him), the stock of the 22-year-old gains a position leading 7.48 Lifetime Value points to rise 11 spots to QB30 in dynasty.

Devin Singletary has experienced up and down usage this season, but that’s changed in recent games. In Week 14, he played 82.7 percent of snaps and drew seven targets. Last Sunday versus the Panthers, he saw 95.1-percent of snaps carrying the ball 22 times (five times in the red zone) and caught his lone target. Singletary turned his Week 15 opportunity into 96 total yards and a touchdown.

For fantasy football purposes, Singletary’s recent uptick in volume has resulted in RB2 production. In Week 14, he scored 14.9 fantasy points (RB14) and followed this up with an RB7 day (16.6 fantasy points) last week. Given the current state of the RB landscape in fantasy, dynasty managers will take it. With Matt Breida relegated to a Snap Share of 1.6-percent in Week 15 and Zack Moss inactive (healthy scratch) the last two games, Singletary has taken over the Bills backfield. Buffalo’s new RB1 (for the time being at least), gains 18.62 Lifetime Value points and nine spots to climb to RB44.

Featured as a riser in the Week 13 edition of the Dynasty Market Movers, Dallas Goedert‘s stock keeps moving in a positive direction. In the latest update, he climbs another two spots to move to TE6. On Tuesday night versus the Washington Football Team, Goedert posted his second consecutive 100-yard receiving game. He caught seven of nine targets for 135 yards and finished as fantasy’s TE5 for Week 15.

Due to deficiencies as a passer, the fantasy results suffer when Hill is stymied on the ground. Unlike the previous two games where he averaged 87 rushing yards, Hill was limited to 33 yards against Tampa. In his last three starts, Hill has just two passing TDs and has averaged under 200 yards through the air. Placed on the reserve/Covid-19 list heading into this week’s slate, the 31-year old loses four spots to fall to QB31.

Missing time with a thigh injury and a stint on the reserve/Covid-19 list, Darrell Henderson returned to action in Week 15 versus Seattle. Unfortunately, he was limited to a season-low 30.5-percent Snap Share. He carried the ball six times with two receptions in the passing game. He produced 27 scoreless yards (4.7 fantasy points, RB51). Not great, Bob!

Before moving on to LV, reminder that this thread is FREE pic.twitter.com/71yA3XLGpk

Sony Michel has played well in recent games, surpassing 100-yards in two of the last three games. Last week, he dominated the Rams’ backfield carrying the ball 18 times. Only time will tell if Henderson’s workload will grow as he gets back up to speed. Regardless, being reduced to a timeshare with Michel combined with the eventual return of Cam Akers doesn’t necessarily bode well for Henderson’s dynasty value. He loses 21.06 Lifetime Value points and 11 spots to fall to RB39 on PlayerProfiler’s dynasty rankings. Michel gains three spots to rise to RB38.

Darnell Mooney finds himself in the midst of a late-season slump. In Week 15, he showed signs of a bounce back, but was still limited to five catches on seven targets for 63 yards (11.6 fantasy points, WR24). This was the best output the sophomore wideout has posted since he posted 123 yards on five catches versus the Lions in Week 12. His Week 15 yardage total was 17 yards more than he was able to generate in the two previous games combined.

Mooney is still earning a healthy 24.9-percent (No. 16) Target Share, but he is delivering WR2/3-level production averaging 11.7 fantasy points (WR33) this season. Better days are ahead for the talented speedster out of Tulane, but for now he loses seven spots and 15.06 Lifetime Value points to fall to WR43.

In a plus match-up versus the New York Jets, Mike Gesicki was only able to muster 43 yards on five catches (eight targets). Since Week 7, he has posted a result better than a TE12 just once (11.6 fantasy points, TE7 in Week 13). He has produced TE1 numbers in six of 14 games. 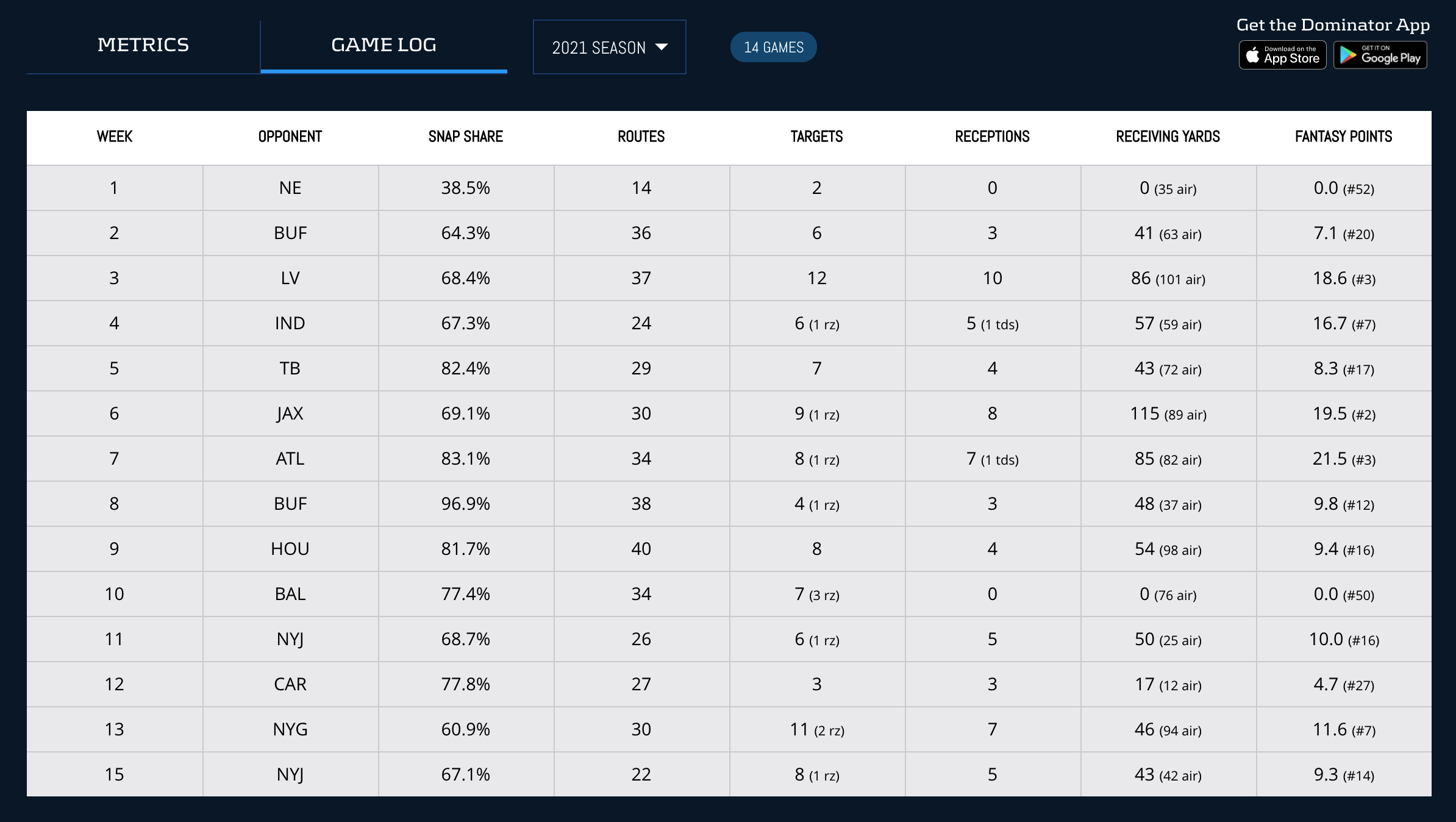 On the year, Gesicki has 64 (No. 3) catches for 685 (No. 6) receiving yards. Despite earning more targets this season (1.2 per game as compared to 2020), he is producing yardage at a near identical rate to last year. To this point in the 2021 campaign, Gesicki is averaging 10.5 Fantasy Points Per Game, 0.1 point per game less than 2020. His dynasty stock is trending down losing 4.73 Lifetime Value points (the second most of any TE this update) and two spots to drop to TE12.