It seems as if every week we talk about D.J. Moore in this section and every week I am reminded about how disappointing he has been since Week four when he finished as the WR3 in the week.

I can't take anyMoore.
Please get DJ a QB🙏 pic.twitter.com/TqcOwLTypA

Even with four consecutive weeks above 12.0 Fantasy Points Per Game, Moore just hasn’t flashed the same upside he did earlier in the season. Regardless, he has seen at least 97 Air Yards in the past three games, and could, in theory, post a boom week again. However, I much more comfortable playing him in cash formats than tournaments.

Ladies and gentleman, through 15 weeks of the NFL season I present to you your Air Yards leader, Justin Jefferson. He also leads the league in Air Yards Share as he has been THE Vikings passing game sans Adam Thielen. He is also only 79 Unrealized Air Yards away from leading the league in this category. Jefferson is an elite triple crown contender in all things Air Yards. Even with Thielen looking like he will return this week, the Jefferson airplane is already at Mach 5 and gaining speed.

Two Rams begin the top-10 value list. Somehow Odell Beckham is priced $200 less than Van Jefferson and this seems like a mistake. Over the past four weeks, Jefferson has only averaged 4.25 Air Yards more per game than Beckham, with this averaged highly skewed by a 170 Air Yard outing in Week 12. Further, Jefferson has only scored 3.2 fantasy points more than Beckham during this same four game stretch. Both of these receivers are solid plays this week against the a horrendous Vikings secondary however, they really should be priced the same and offer nearly identical boom upside. Feel free to roster whichever one you can fit in your budget in all formats. 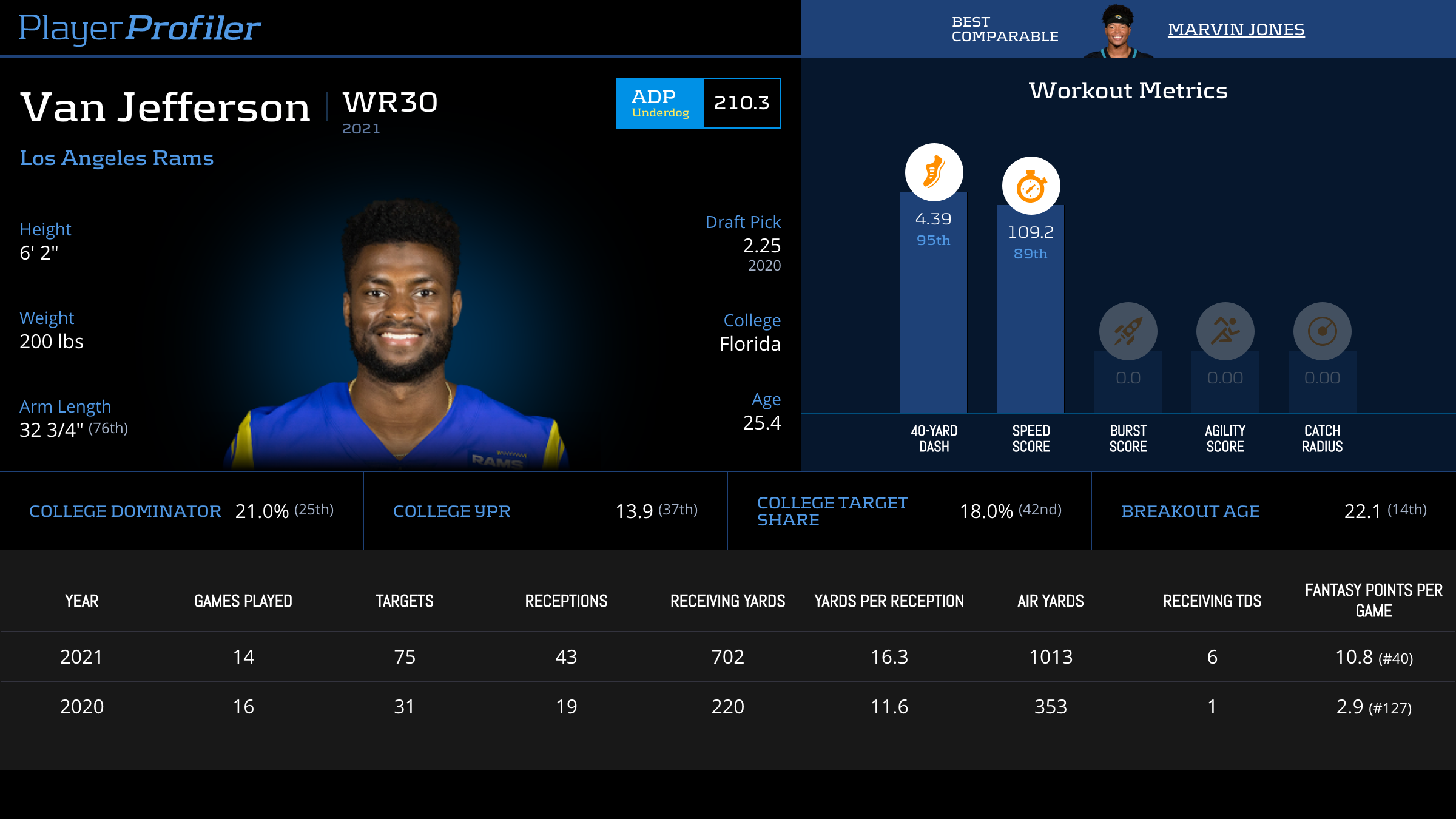 Both of these receivers are solid plays this week against the a horrendous Vikings secondary however, they really should be priced the same and offer nearly identical boom upside. Feel free to roster whichever one you can fit in your budget in all formats.

Bryan Edwards scored a touchdown last week.  However, he only saw four targets and finished with eight receiving yards. He remains a highly volatile option in the Raider passing game thanks to his 15.2 (No. 6) Average Target Distance. He is best deployed as a ultra budget saving option in all formats.

Robby Anderson has made a bit of a resurgence since Joe Brady departed the Panthers. He has averaged 10 targets, 88 Air Yards, and 15.3 fantasy points in this two game span. Look for this trend to continue this week in a game the Panthers are likely going to play catch up in against the Tampa Bay Buccaneers.

Jakobi Meyers has seen at least 120 Air Yards in the past two games in which the Patriots attempted more then three passes. In those two games, he has averaged 10 targets and 13 fantasy points.

Meyers is a solid play in all formats this week with that type of target and Air Yard volume.

Chase Claypool makes his debut on the Air Yards value index coming off his worst game of season in which he scored only 1.9 fantasy points. Claypool also saw only 15 Air Yards last week. He should revert closer to his year long average of 83.5 Air Yards per game this week. Assuming he is able to reclaim that opportunity, he should be a volatile tournament option.

Marvin Jones scored only 3.4 fantasy points last week. However, he saw the same amount of Air Yards (56) that he did in Week 14 when he scored 13 fantasy points. In this Jaguars offense, Jones has little upside and is best deployed as a budget saving option in cash formats.

Darnell Mooney is back under $5,500 after a respectable performance last week in which he saw 78 Air Yards and scored 11.6 fantasy points. He should remain the Bears clear cut number one receiver if Allen Robinson remains sidelined. Even with Nick Foles throwing him the football, Mooney should be rostered in all formats.

Emmanuel Sanders appears to be the last man standing after both Cole Beasley and the intriguing Gabriel Davis were ruled out of this week’s game against the Patriots with COVID-19. Assuming Sanders is back at full health, he should have no issue seeing boom-or-bust downfield targets from Josh Allen. He should be someone you want exposure to in tournaments.

Courtland Sutton has been very close to being redacted from the list for some time. He posted another fantasy dud last week scoring only 3.2 fantasy points despite seeing 119 Air Yards. Perhaps Drew Lock can unlock Sutton and make him something more than a tournament dart throw.

Good luck to everyone in Week 16. Merry Christmas, and may all your Air Yards be realized.