The Dynasty Market Movers Report features risers and fallers on PlayerProfiler’s dynasty rankings. The goal is to keep fantasy gamers in tune with the ebbs and flows of player values. The Week 13 edition is here. Let’s get to it!

Second overall pick, Zach Wilson completed 23 of 38 pass attempts for 226 yards and three touchdowns (one rushing) in Week 13 versus the Eagles. Earning Rookie of the Week honors for the second time, Wilson delivered a QB6 fantasy day (22.0 fantasy points) – the best of his young career.

In eight games, Wilson has 1,539 (No. 29 among qualified quarterbacks) passing yards and six (No. 32) touchdowns. Despite 11 interceptions, he has a 7.9 (No. 6) Accuracy Rating, which leads all rookie signal callers. With the Saints on tap in Week 14, Wilson looks to build on the strides he’s made since returning from a four game injury hiatus. His dynasty stock gains a position leading 6.19 Lifetime Value points to rise two spots to QB20.

Josh Jacobs is handling ALL the backfield work the rest of the season🔔🐮 pic.twitter.com/4C77Qvgj0y

In Week 13 versus the NY Jets, Dallas Goedert hauled in all six of his targets for 105 yards and two touchdowns. This career-best performance landed fantasy managers a 28.5 fantasy point (TE2) score. Even with Zach Ertz in the fold for the first six games this season, Goedert posted a TE1 fantasy score in five games played. He is currently the TE10 (10.6 FPPG) in 2021.

Since returning from a five games stint on the injured reserve with a hamstring strain, Tyrod Taylor and the Texans offense has struggled. In Week 11, the veteran passed for just 107 yards (4.5 Yards Per Attempt) with two rushing touchdowns. Week 12 was not much better with 158 yards and two passing scores. In Week 13, Taylor posted 45 yards and was injured then benched in the third quarter in favor of rookie Davis Mills – the latter will start for the remainder of the 2021.

After a solid Week 1 debut, Taylor was featured as a market riser moving up to QB32. Fast forward 12 weeks and his dynasty stock continues to trend downward. In six games, he has averaged 14.5 Fantasy Points Per Game (No. 26) which is helped by 25.2 rushing yards per game and three rushing TDs. Now relegated to back-up duties, he loses 11 spots and 6.31 Lifetime Value points (the most of any QB in this update) to fall to QB45 in dynasty.

Since returning from a single game absence due to a heel injury in Week 10, it’s been tough sledding for James Robinson. Prior to the Jags’ Week 7 bye, Robinson averaged a Snap Share of 73.9-percent. In the last four games, this is down to 54.5-percent of snaps in part due to being benched twice for fumbling. However, Robinson’s reduction in snaps, carries, routes run and targets is not just recent problem, overall these metrics are down for 2020.

“Bottom line is: James is one of our best players, and he has to be on the field.”

ICYMI, I asked Trevor Lawrence about James Robinson potentially having been benched the past two weeks: pic.twitter.com/dxwUF0Eqs2

Robinson produced 14.7 Fantasy Points Per Game in 2021 (RB22), a dramatic drop from the 17.9 he’s delivered in 2020. In fairness, he’s faced questionable coaching decisions and his injuries woes have lingered since Week 8. With Trevor Lawrence campaigning for more Robinson deployment, hopefully better days are ahead for the sophomore UDFA. Until then, J-Rob loses seven spots and 29.28 Lifetime Value points to fall to RB33. 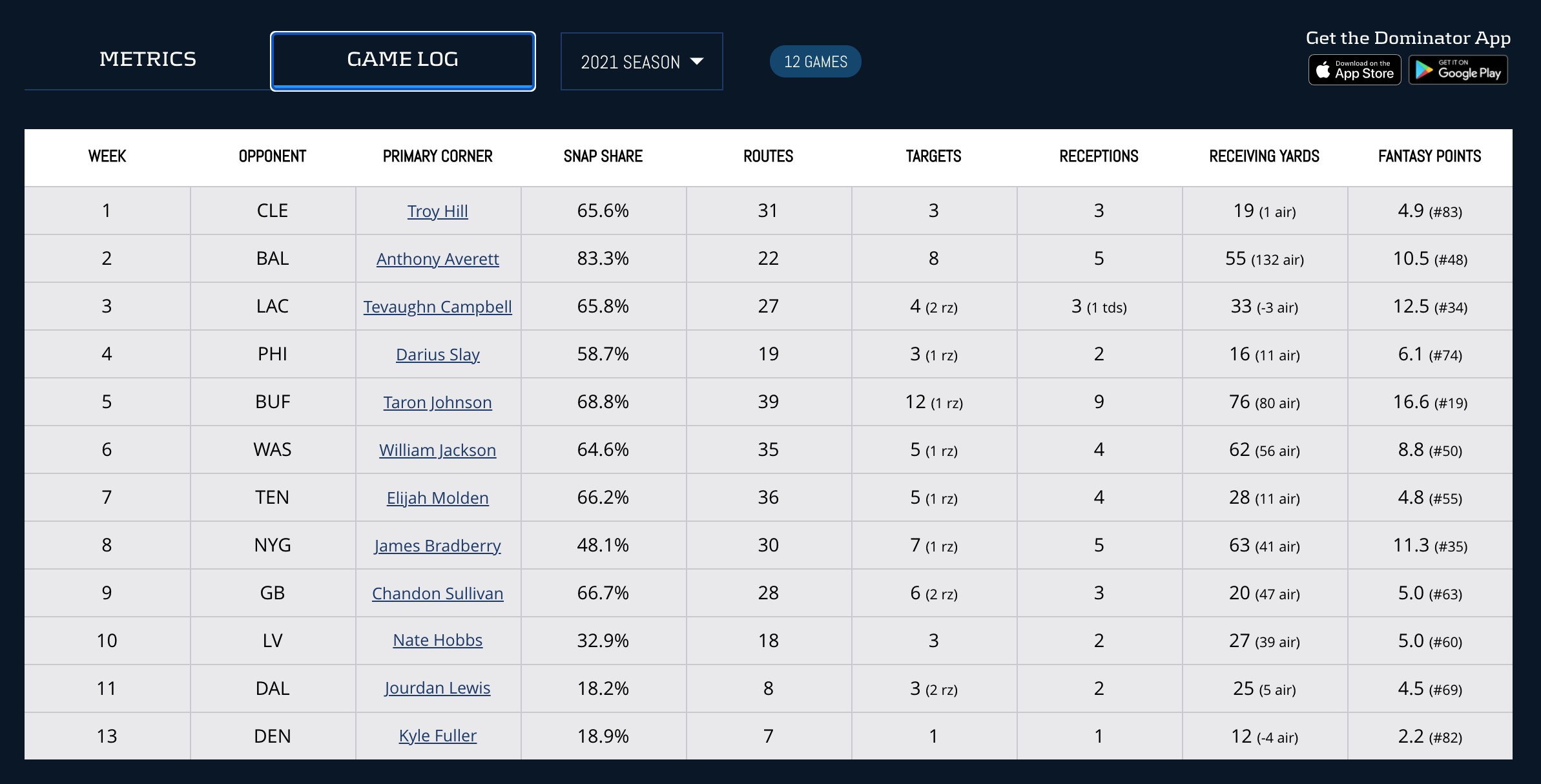 Sounds bad? It actually gets worse. In recent games, Hardman has seen a dramatic drop off in usage. His Snap Share has declined from 66.7-percent in Week 9 to 32.9-percent in Week 10. Since then he has hovered around 18-percent and been out-snapped by both Byron Pringle and Demarcus Robinson for two consecutive weeks. Hardman has seven targets over the past three games catching five passes for receiving totals of 27, 25, and 12 yards. His dynasty stock continues to trend way down losing 14.10 Lifetime Value points and plummets 23 spots to WR85.

The Broncos tight end rotation and commitment to the run game has capped Fant’s fantasy ceiling. He’s has produced a TE1 week just four times in 2021 and has finished TE28 or worse four times. Fant has 14 targets in the last two games, but Albert Okwuegbunam has nine. Hampered by his current situation, the talented Fant loses one spot to slip to TE9 in dynasty.