Welcome to another exciting week in the NFL, and this matchup looks to provide fireworks between the Washington Football Team and the Dallas Cowboys. The Cowboys are at 8-4 and first place in the NFC East, but the Washington Football team is 4-0 in its last four games, including a win over the World Champion Tampa Bay Buccaneers. There is plenty of star power in this game, so let’s take a closer look at both teams so we can have a better understanding of what to expect. 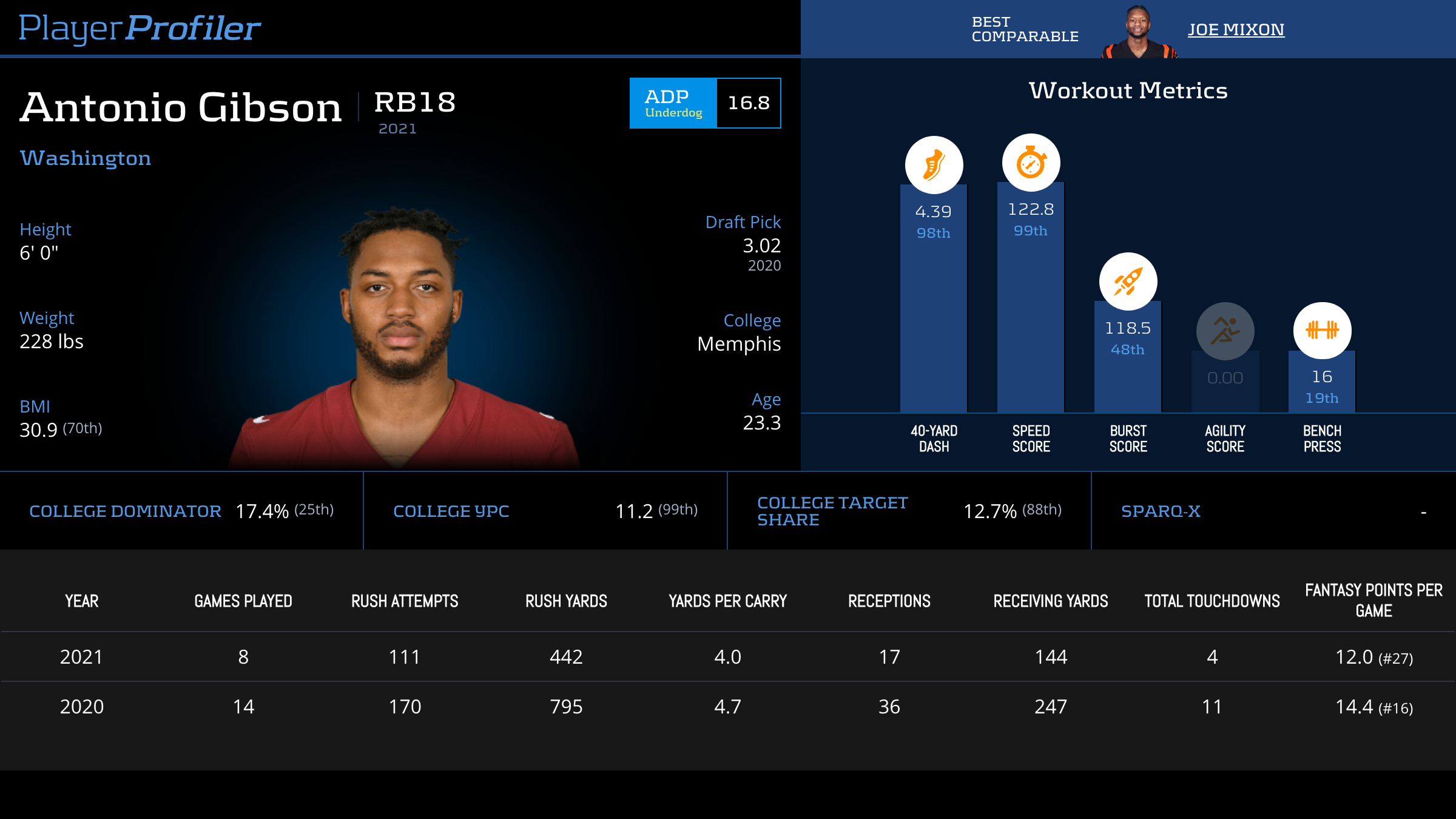 Since the bye week in week 9, the WFT has given the star running back a full workload and the numbers reflect it.

The rumors of Antonio Gibson‘s demise have been greatly exaggerated. In the first eight weeks of the season, Gibson had two games with over 95 total yards. In the last four games, he has had three games with 95 yards or more. Since coming out of the Week 9 bye with reports of a stress fracture in his shin, Washington has gone with a conservative offense and heavy, hearty doses of the running game. It might be boring to casual fans, but the results do not lie with them winning the last four games and being arguably the hottest team in the NFC. Dallas has the No. 14-ranked rush defense, which doesn’t exactly strike fear into the opposing running game. We all can expect a strong performance from Gibson while they continue to use this conservative attack.

While Antonio’s ship is sailing, there is a different ship passing him in the night.

Terry McLaurin is a key cog in this offense, he just happens to play second fiddle during this Gibson stretch.

Washington has had injury issues with Logan Thomas and Curtis Samuel and have been unable to rely on them this season, but McLaurin has yet to miss a game, and has a 94.0-percent Snap Share, tops among qualified wide receivers. We all know that the best ability is availability! He is still commanding Deep Targets shown by his league-leading 44.4-percent Air Yards Share. We will see a handful plays made by Terry in this game; if you’re rooting for him, let’s just hope it’s those air yards finally converting into completions down the field. The big plays are coming, so keep him in your fantasy lineups!

Tony Pollard truthers were officially on cloud nine after the performance against the saints, and it’s understandable.

Unfortunately, Pollard suffered a torn plantar fascia in that Thursday night game and is a game time call. Ezekiel Elliott‘s knee is not at 100-percent, and Dallas recently signed Ito Smith to the practice squad. Another stat to consider is that the WFT has allows the third-lowest total rush yards of all NFL teams. These clues give me the sneaky suspicion that we may be in store for a Dak Prescott game. He may not have 400 passing yards, and 5 TDs, but he likely will be the one carrying the offense, attempting to will the cowboys to victory with the injured running backs unable to contribute 100-percent of their abilities. Before I get into the greatness that is the wide receiver group of the Cowboys, I want to pivot off them and say a word about tight end Dalton Schultz. 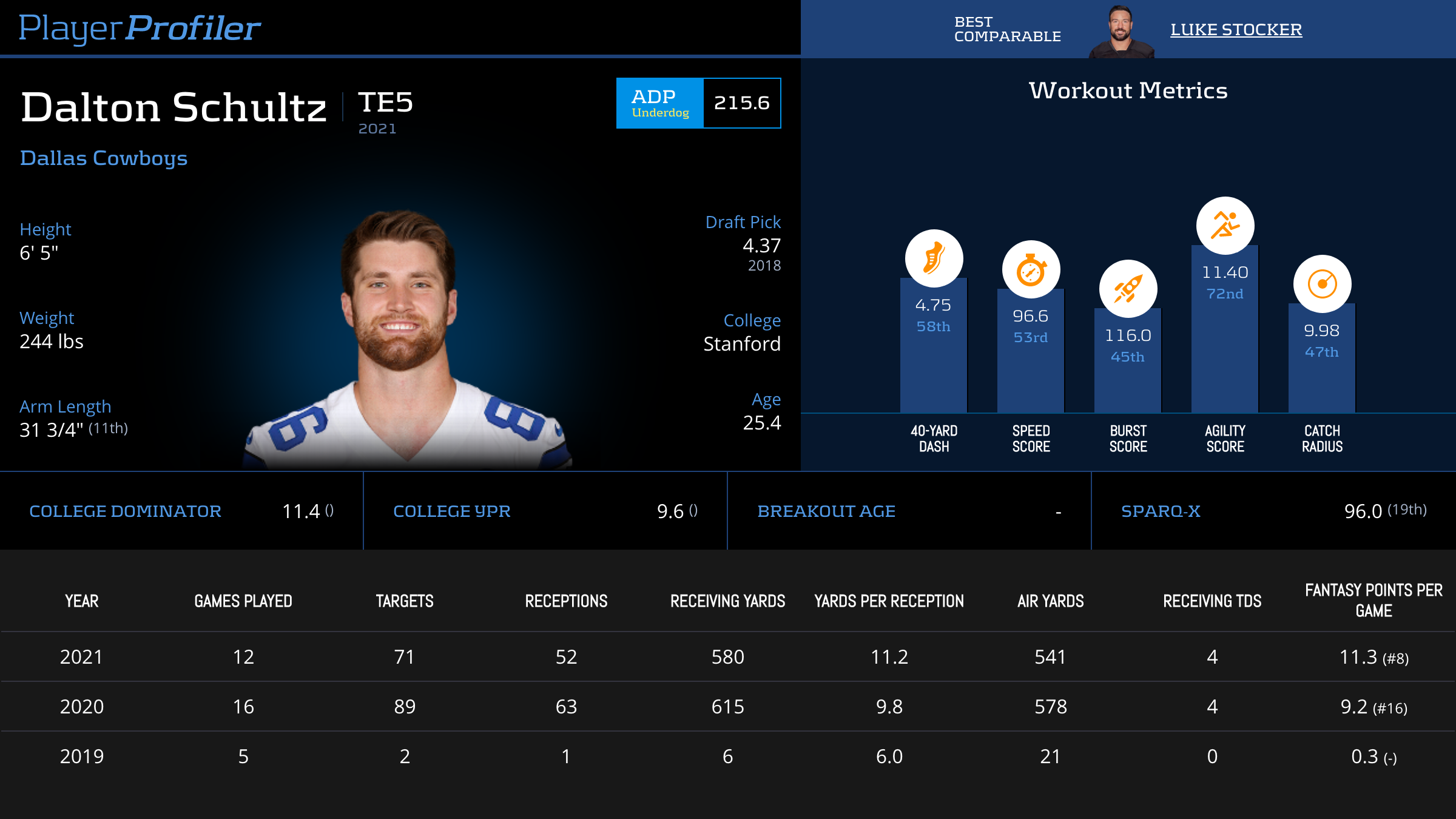 Schultz ranks No. 7 in the NFL in targets among tight ends (71), and No. 6 in receptions (52). If the game goes to a shootout, he’s going to get valuable targets. And if Dallas’ potent offense hits a wall? He has proven he can run routes close to the line of scrimmage and create those easy completions for Prescott to keep the offense going. He’s got an 11.40 (72nd-percentile) Agility Score, comparable to Darren Waller and Dallas Goedert. He is able to make separation against linebackers, and strong safeties and defenses wouldn’t want to use a speedy defensive back on him with three speedy wide receivers. He’s a great target for DFS players, and signs point to him being game flow proof.

Michael Gallup, CeeDee Lamb, and Amari Cooper are all must starts, and will very likely produce in one way or another in this game. While he’s been out for most of the year, Gallup recently returned and produced at a consistent level each game he has been a part of. I want to share a tiny nugget of information I learned about him while scouring the data pages of PlayerProfiler. He leads all Cowboys receivers, and is No. 7 in the NFL in Contested Catch Conversion Rate. Lamb and Cooper are incredible talents, and Gallup is emerging now that he has healed up.

Washington is a quality team, capable of taking down the greatest of teams (ask Tom Brady), but I expect the Cowboys to win.

Dallas has a bad habit of sleepwalking into games, expecting to win at ease (Denver Broncos ring a bell?), but with two matchups against the hot Washington Football Team in the next three weeks, the Cowboys will be highly motivated for this game and want nothing more than to squash this red hot momentum.