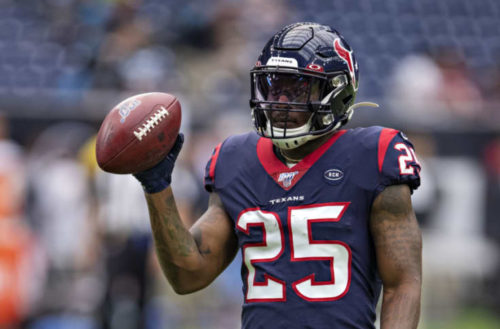 This week, more than most this late in the season, sees a number of players with fantasy RB1 potential widely available across waiver wires. These players, as always, should take priority for teams looking to bolster their chances of winning their fantasy championships. That doesn’t mean we should ignore the wide receivers, a bunch of whom are on the verge of Dance Party-inducing breakout performances. PlayerProfiler’s advanced stats and metrics are here to guide you through this week’s waiver process and ensure that you’re picking up the right players for both the short and long haul.

Duke Johnson is the latest example of why we should be stashing backup running backs this late in the season, especially those who project to be bell cows in the event of an injury to the starter.

The fantasy community has waited years for Johnson to have the opportunity he’s been presented for Week 10. With David Johnson yet to be cleared from his Week 9 concussion, Duke is looking at an every-down role in a narrative-soaked revenge game against his former team. You know what to do.

Another week, another Wayne Gallman recommendation in the weekly waiver wire piece. Though the corpse of Alfred Morris continues to siphon backfield work, Gallman is the Giants RB we want. Last week’s game against Washington marks his third straight with at least 50 total yards and a touchdown in Devonta Freeman‘s absence.

Gallman hasn’t been the league’s most efficient runner, but he has recorded a Breakaway Run on 5.4-percent of his runs, the No. 15 mark among qualified running backs. With games against the Eagles, Bengals and Seahawks on deck, make sure you have him rostered for this vital, pre-playoff stretch run.

Right when it looked like Jonathan Taylor was about to turn the corner, he may have fumbled away any chances of a rookie season breakout. Regardless, Jordan Wilkins isn’t going away anytime soon.

Like we mentioned last week, with Nyheim Hines seeing work and Trey Burton continuing to see the occasional goal-line usage, the biggest concern is this Colts backfield remaining crowded. Wilkins needs to be stashed in advance of a soft run of defenses (TEN, GB, TEN, HOU, LV, HOU, PIT, JAX) to end the season.

With David Montgomery racing against the clock to get cleared from his Week 9 concussion, Ryan Nall makes for an intriguing add in deeper leagues and/or for teams who need a spot start at the RB position.

With prototypical size and speed to go along with exceptional weight-adjusted agility and pass-catching acumen, all Nall lacks is pro experience. Though it’s promising that he logged four catches for 35 yards and a touchdown in the fourth quarter during last week’s comeback attempt against the Titans. Lamar Miller still looms on the practice squad, while converted WR Cordarrelle Patterson is the only other healthy RB to have logged a carry for the Bears this season. Take a chance on a player with all the tools to be the next fantasy-league winning UDFA gem.

No one ever wants to pick up J.D. McKissic, but it’s time to acknowledge that he’s a force to be reckoned with in PPR formats. Though he may be Game Script-dependent, he’s only logged two games this year with fewer than four targets. His 14 looks against the Giants put him at 47 for the season, the No. 3 mark among running backs. With Alex Smith at QB for the foreseeable future, look for McKissic to be a viable Flex play the rest of the way.

Darrell Henderson‘s 11.5 Fantasy Points per Game is a disappointing mark given the opportunity he’s received. Malcolm Brown, despite being a carbon copy of Mike Davis and showing well in many of our advanced receiving metrics, only averages 8.9 Fantasy Points per Game. If there were any week for Cam Akers to take control of this hot-handed backfield, it would be this week against the dreadful Seattle defense.

With a backfield-leading 32.4-percent Juke Rate, Akers has shown that he has the juice to fuel a potential dance party if he can break out this week. If Henderson doesn’t return from his lower body injury for this contest, Akers will become the ultimate free square RB in all fantasy formats.

With Myles Gaskin set to miss a few more weeks, production in this Miami backfield is up for grabs. Look no further than UDFA Salvon Ahmed leading the team in Week 9 with 38 rushing yards on seven carries. Because he didn’t play last week, Matt Breida should fly under the radar during this week’s waiver process.

A longtime favorite satellite back-plus here at the Underworld, Breida has the Alfred Morris corollary working in his favor with Tua Tagovailoa showing that he can pick up chunk yardage on the ground. If he can return from the hamstring injury that cost him Week 9, he also draws a Week 10 matchup against a sneaky-bad Chargers defense that has let up 21 or more points in every game since Week 2.

He’s assuredly already rostered in competitive leagues, but Jalen Reagor is somehow still available in 76-percent (!) of Yahoo leagues. All he did against Dallas in Week 8, his first game since going down with a thumb injury in Week 2, was log an 83.3-percent Snap Share, draw a season-high six targets and score his first career TD en route to an 11.2-point fantasy performance. He’s unlikely to usurp Travis Fulgham this season as Philadelphia’s WR1, but he has the juice, the team situation, and the rest-of-season schedule (NYG, CLE, SEA, GB, NO, ARI, DAL, WAS) to be a major fantasy factor down the stretch.

Is Curtis Samuel actually the answer to the question of which Carolina WR we want to roster in fantasy this season? It didn’t start out that way, but since returning from a knee injury that cost him Week 6, he has scored in three straight games and logged two 20-plus-point performances. He’s finally happening.

Samuel has seen his recent floor bolstered by carries and rushing touchdowns, and now Christian McCaffrey is in danger of missing this week’s contest. His dynamism will make him an enticing, high-ceiling Flex play down the fantasy stretch.

Despite a looming matchup against the Ravens, it’s hard to argue that Jakobi Meyers hasn’t earned every-week starter treatment for the foreseeable future. Sure he thrived in negative Game Script against a bad Jets defense, but 14 targets and 169 (!) Air Yards is hard to argue with for a player who doesn’t own exceptional athleticism relative to his peers.

Julian Edelman is dust, Damiere Byrd hasn’t popped, and it’s not happening for N’Keal Harry this year. Meyers has become the gleaming beacon of hope for this Patriots receiver group and for WR-needy fantasy gamers.

Darnell Mooney has incrementally graduated from enticing rookie to No. 2 receiver in Chicago, while simultaneously graduating from Air Yards threat to target magnet that also draws Air Yards. If there was ever a week for him to put it all together and truly go ham, it would be this week against the Vikings and what they refer to as a secondary.

There are times when we can learn much about a player and his potential even when the stats don’t back it up. In a Week 9 contest against the Ravens where we knew passing yardage would be hard to come by for the Colts, Michael Pittman emerged as a go-to option for Philip Rivers. We already know the schedule eases up, and we know T.Y. Hilton no longer has the juice. It’s time to stash Pittman in advance of the inevitable blow-up game.

If Jerry Jeudy hadn’t broken out all over the place, the fantasy community would be making a bigger deal of K.J. Hamler drawing 10 targets and cracking the elusive 100-Air Yard mark for the first time since Week 2. With Albert Okwuegbunam out for the year with a torn ACL and Noah Fant re-injuring his ankle, all of Denver’s passing game options deserve starting consideration both in Week 10 against the Raiders and going forward.

With four or more targets in every game this season, Tim Patrick has emerged as a go-to option for a suddenly competent Denver offense. And by suddenly competent, we mean they’ve done well in favorable matchups over the last two weeks. The injuries to fellow Broncos pass-catchers will keep Patrick and K.J. Hamler in play as rest-of-season Flex plays, as will a fantasy playoff schedule that includes games against the Panthers, Bills and Chargers.

We don’t usually recommending using waiver priority or FAAB budget on players entering their bye week, but Denzel Mims is an exception. He had as good a game as possible in a difficult matchup with New England despite not popping in the box score relative to teammate Breshad Perriman (5-101-2).

While Breshad Perriman (7%) scored twice and is worth stashing for those with the bench space, Mims has a higher ceiling and should be the priority. We can’t feasibly expect the Jets offense to look this competent every week, and Adam Gase’s presence is still a net negative. Still, Mims is on the verge of a breakout game, and you need to have him already rostered when it happens.