The waiver wire is lackluster heading into Week 9 compared to other weeks this season. The debate of Jonathan Taylor being a bust or just being banged up will rage on for weeks to come, but as fantasy gamers, the focus is which Colts running back should be heavily targeted moving forward. Luckily, PlayerProfiler and our advanced stats and metrics are here to cut deep and dig up the risers of tomorrow to help you stay alive heading down the stretch of the fantasy football regular season.

Wayne Gallman has touchdowns in back-to-back weeks with Devonta Freeman out of the picture. His role will continue to expand as the matchups get easier. If he keeps Freeman on the bench, even when healthy, he can be fantasy viable for the rest of the season.

Jordan Wilkins is the hot name in fantasy circles coming off a monstrous 20-89-1 workload on the ground against the Lions. Wilkins has obvious upside if Jonathan Taylor is inactive in the coming weeks.

With Nyheim Hines seeing work and Trey Burton continuing to get goal-line usage, the only concern is this Colts backfield remaining crowded regardless of whether Taylor suits up. Don’t ignore Wilkins on the waiver wire this week, but put keep an eye out for potential workload siphons from Wilkins.

Gus Edwards and J.K Dobbins both had fantasy viable weeks with Mark Ingram sidelined in Week 8. A two-headed backfield is always more fantasy friendly than a three-headed monster. Dobbins is highly owned due to name value, but Edwards is still widely available for those who need a boost to their running back corps. Edwards had 16 carries to 15 for Dobbins and 16 for Lamar Jackson. Justice Hill was unused, paving the way for both other running backs to hold weekly value. Jackson’s presence limits the ceiling and pushes Edwards down the priority list.

DeeJay Dallas was a top 5 running back in Week 8 with the Seattle backfield ravaged by injuries. There is no guarantee that Chris Carson or Carlos Hyde come back this week, and an every-week role is possible for Dallas regardless. Any running back can thrive when playing in the same backfield as Russell Wilson.

Malcolm Brown continues to get touches with the Rams. He was featured with 18 carries and four targets following a Darrell Henderson injury in the second quarter.

darrell henderson (thigh) went down just before halftime, and yet the overall game usage breakdown was not super-encouraging for cam akers.

A Cam Akers breakout looms on the horizon; but until we see it, Brown can be trusted as an every week starter without Henderson.

Eno Benjamin is the projected No. 2 back for Arizona behind Chase Edmonds. He is an upside stash at this point, but deserves a shot on your bench. It is unknown exactly how this backfield will shake out without Kenyan Drake. Edmonds is the projected workhorse, but Benjamin has potential for standalone value, and would vault into relevancy if Edmonds also gets hurt. Recall in 2019 that Edmonds had one monster game after David Johnson went down, and then he himself incurred an injury after the increased workload. If Kliff Kingsbury remembers this, he may expand Benjamin into a committee back and not simply a change-of-pace role.

Brian Hill has been admirable in a change-of-pace role for Atlanta. He is the clear backup if Todd Gurley and his RB1 volume go down. Stash Hill if you have the bench space.

Tyler Ervin is worthy of a one week plug-and-play with Jamaal Williams and A.J. Dillon out for Week 9. Don’t ruin your bench depth trying to add him, but consider this dart throw if he is vaulted into Green Bay’s RB1 chair for the week. Dexter Williams is also worth adding and stashing in the likely event that he is activated from the practice squad and thrust into a bigger role without Aaron Jones around.

Russell Gage has been quiet since his hot start to the season. He draws a plus Week 9 matchup against a soft Denver defense. Coupled with Drew Lock‘s potential to push this into a shootout, and the likely absence of Calvin Ridley, Gage is a great bye week fill-in.

Tim Patrick is the available outside receiver worth targeting on the other end of this potential shootout between Denver and Atlanta. Drew Lock has been no stud, but he can sustain big-play wide receivers.

Patrick has four or more targets in every game this season and can push 10 targets in the event of a shootout.

Laviska Shenault has flashed talent at points this season. Jacksonville has projected negative Game Script in a potential shootout against Houston. Shenault has WR2 upside going into this matchup.

Marvin Hall flashed deep play ability this past week following a Kenny Golladay injury. Hall will get more run alongside Marvin Jones with Golladay out for Week 9. He is a low priority add with unsustainable production in a blowout scenario. Expect Detroit to utilize their running backs more and incorporate Danny Amendola in more competitive Game Scripts.

Jakobi Meyers is a high-floor option at receiver with little competition in New England. He has filled in admirably for Julian Edelman and will continue to see 6-10 targets per game.

jacobi meyers and damiere byrd were clear starters with clear roles on sunday.

Randall Cobb is widely available coming off a bye week and should be coveted going into a softball matchup. His role as the clear slot receiver maintains a consistent fantasy floor. Cobb can help fantasy managers get through a tough bye week.

Kendrick Bourne is one of the few last men standing in San Francisco. Bourne caught eight-of-ten targets in Week 8 for 81 yards following Deebo Samuel and George Kittle injuries. Nick Mullens has shown an ability to generate fantasy-viable wide receivers. It is also possible that this offense struggles to put up points in general. Bourne is a fair consolation prize if you fail to acquire anyone else this week.

Damiere Byrd has not been fantasy viable to this point in the season. He is an excellent spot start in Week 9 for those looking for a high-upside dart throw. He is the primary outside receiver and deep threat for Cam Newton.

The Jets are the ideal matchup given they are a complete pass funnel. Gregg Williams goes out of his way to stop the run and the secondary is as soft as it gets.

Darnell Mooney continues to grow his role as an every-week option for Nick Foles and the Bears offense. Mooney has five or more targets in five straight games with an 80-plus-percent Snap Share in each of the last two weeks. 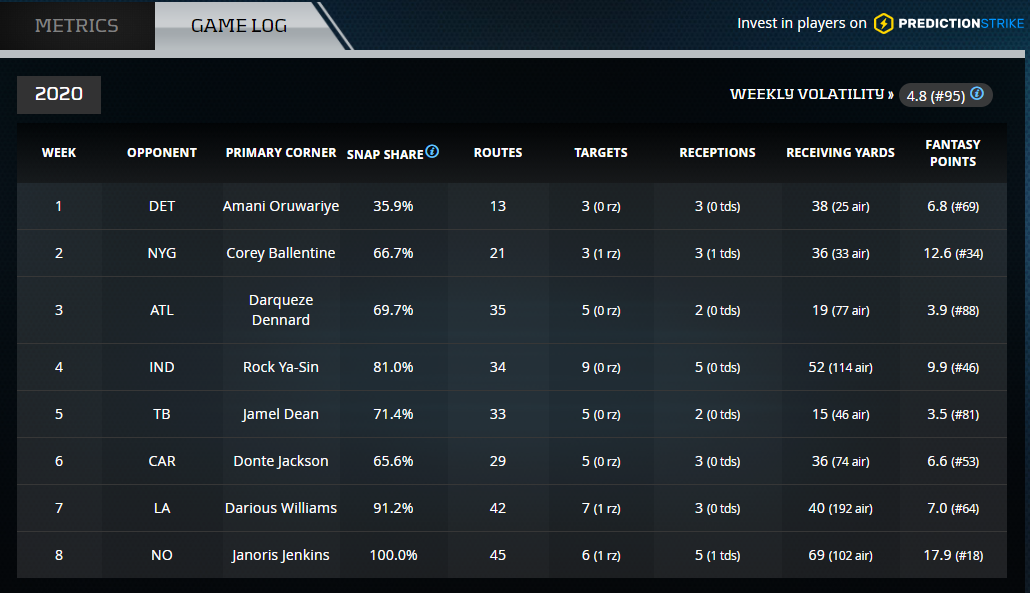 The Bears schedule softens moving forward with Tennessee, Minnesota, Green Bay, Detroit, Houston, and Minnesota again. Allen Robinson is a target hog for Chicago, but Mooney has definitive value down the stretch.

david moore is the rare handcuff wr that should be stashed in deep leagues.