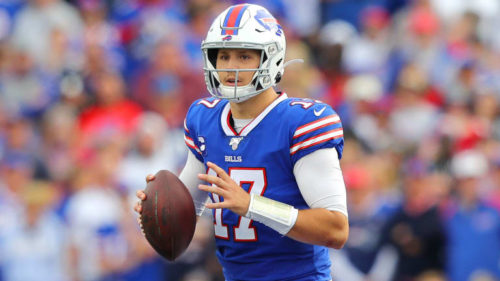 The NFL regular season is in the books but that doesn’t mean the fun has to end. Whether you scooped up all the winnings in your leagues, turned a nice profit in DFS or just can’t get enough fantasy football, the DraftKings Wild Card slate has you covered.

With only four games on Wild Card weekend, this won’t play like a traditional main slate. We’ll need to eat some chalk and smash on some punt plays to win tournaments. Taking advantage of the late swap with two games on Sunday will also be key. Here are the best plays on the slate.

There truly aren’t any standout quarterbacks on this slate. Drew Brees ($6600) and Deshaun Watson ($6400) are typically locks at home, but they have tough matchups against the Vikings and Bills, respectively. Ryan Tannehill ($6300) and Kirk Cousins ($6100) have had their moments this season, but they are on the road against stout defenses. This makes Russell Wilson the best option.

While Wilson is on the road, the Eagles secondary isn’t scaring anyone. Plus, he always has the “Konami Code” in his back pocket, giving him a higher floor based on his rushing. He also completed 81.5-percent of his passes from a clean pocket, which was No. 1 in the league among qualified quarterbacks. According to Football Outsiders, Philadelphia ranks 16th in adjusted sack rate, so Wilson should have plenty of clean pockets to work with.

The Seahawks rarely unleash him, but if their run game struggles with Marshawn Lynch fresh off the couch, Wilson may see elevated pass attempts. That would lead to more Money Throws, which Wilson already ranked No. 2 in, so multiple passing touchdowns are more than likely in this spot.

While Lamar Jackson led the quarterback position in rush attempts by over 60, No. 2 on that list wasn’t Russell Wilson or Deshaun Watson. It was actually Josh Allen. While he has a cannon for an arm, evidenced by the highest Throw Velocity in the PlayerProfiler database, he also has an above-average 4.75 (77th-percentile) 40-yard dash, 118.1 (82nd-percentile) Burst Score and 11.30 (69th-percentile) Agility Score at 6-5, 237 pounds.

That will be key against the Texans. Not only has Houston allowed the fourth-most passing yards and touchdowns, but they have also allowed the seventh-most rushing yards at 5.6 yards per tote. Allen has a tendency to scramble like a mad man, so he’ll pick up free fantasy points no matter what play is called. Playing Allen without stacking any of his pass-catchers is an excellent contrarian strategy because he can be the QB1 on this slate without any of his receivers popping off.

Yes, DraftKings gives a full point for every reception. No, it does not matter that Derrick Henry is outside the top 50 running backs in receptions. Henry showed in Week 17 why he doesn’t need receiving volume, overcoming a 125-yard deficit to surpass Nick Chubb for the rushing title.

With a 116.3 (97th-percentile) Speed Score at 6-3, 247 pounds, Henry is a rare breed. That combination of size and speed allowed him to finish with 15 (No. 2) Breakaway Runs and 1.80 (No. 5) Yards Created Per Carry through Week 16. His big play ability also makes him dangerous from any part of the field. He finished the regular season with 18 (No. 3) total touchdowns despite only seeing 10 (No. 11) goal line carries.

The Patriots have a dominant defense, but they are weakest against the run and Henry is a game-wrecker that can break a slate. The Pats scored 30 points only once over the second half of the season, so he’s in no danger of being game-scripted out of his carries. Look for Tennessee to run their offense through their best player.

At 28.0 points, the Saints have the highest implied team total on the slate. Alvin Kamara has also looked explosive and healthy over his last two games while finding the end zone four times. With a new knack for scoring on the team that should score the most points, he has the highest touchdown equity among all players on the slate.

With Dalvin Cook’s ($7800) lingering shoulder issue, Kamara is also the only healthy running back that is heavily utilized on the ground and through the air. In his four career playoff games, he averages five catches, 88.8 total yards, and 0.5 touchdowns. Kamara should be prioritized in cash lineups.

Miles Sanders seemed to have suffered a significant ankle injury that required an X-ray and an MRI this week. Boston Scott filled in and crushed expectations, compiling 138 total yards with three touchdowns. Given Scott’s success and no bye week, Philadelphia should hold Sanders out this week against Seattle.

That would make Scott the chalk this week, having a cheap price relative to his projected bell-cow workload. With a 125.9 (87th-percentile) SPARQ-x score, he has exceptional athleticism across the board. If he sees another 23 touches this week, he has the tools to break multiple long runs. Monitor Sanders’ health closely throughout the week and lock in Scott if he’s unable to suit up.

With 10 games of at least 16 touches this season, Carlos Hyde is clearly the preferred option in the Houston backfield. Houston won eight of those games, with Hyde milking the clock in the second half. The Texans are favored by three points over the Bills, so Hyde should see neutral to positive game script throughout the contest.

The Bills are also a run-funnel defense. According to numberFire’s schedule-adjusted metrics, they rank ninth against the pass compared to 19th against the run. Watson may struggle to find production through the air, so expect Bill O’Brien to use Hyde more than usual to take advantage of that matchup. He can easily top 100 yards and hit pay dirt multiple times.

Drew Brees‘ road woes affected Michael Thomas throughout the season. The new NFL record holder for receptions in a season averaged “just” 19.9 DraftKings fantasy points on the road. That number skyrocketed to 30.7 when in the Superdome.

Thomas has been among the steadiest fantasy options all season, so there is no reason to fade him at home against the Vikings this week. Minnesota has allowed the ninth-most yards to receivers and both Xavier Rhodes and Trae Waynes have been benched throughout the season.

Thomas has been money in the postseason, averaging 11.25 targets and 105.75 receiving yards in four games. One of those was also against Minnesota, where he totaled 85 yards and scored twice. Not much more needs to be said about this guy.

Adam Thielen has missed plenty of time this season, but he has been wildly efficient when on the field. Through Week 16, Thielen averaged 0.58 (No. 6) in Fantasy Points Per Pass Route and 2.38 (No. 3) Fantasy Points per Target. He also owns a 130.0 (No. 4) QB Rating When Targeted.

Thielen is so efficient year after year because of his role as the trusty slot receiver who runs routes closer to the line of scrimmage and gets free releases more often. He also has the talented Stefon Diggs running routes on the outside and soaking up the defenses top coverage corner. That typically allows Thielen to feast on the lesser slot CBs, which will happen this week.

Marshon Lattimore is a premiere shadow CB, but he’ll be chasing Diggs all game. Meanwhile, Thielen will run against the combination of Eli Apple, P.J. Williams and Janoris Jenkins. All three rank outside the top-50 CBs in Fantasy Points Allowed Per Target.

With nearly every athletic score over the 90th-percentile (except his Agility Score, of course), D.K. Metcalf is a mismatch for any defender. That elite athleticism has translated into 11 games with over 10 fantasy points this season, but only one game in the top five. That makes Metcalf a sneaky high-floor player that has untapped fantasy potential heading into Wild Card Week.

The Eagles rank 27th against receivers in DK scoring, so Metcalf can easily drop a monster week on this team. His Week 17 performance was encouraging, seeing 12 targets to Tyler Lockett’s seven and nearly quadrupling his Air Yards with 150 on the day. He only had 73 completed Air Yards, but that is an indication that Wilson trusts him and wants to go to his big-bodied, freak athlete on the outside.

Metcalf’s floor is solid enough for cash games, and we know what kind of ceiling he possesses with his size/speed combination.

With no great receiver options under $5000, DeAndre Carter may become the key to this slate. Neither Will Fuller nor Kenny Stills has logged a full practice this week. Without them, Carter would log a majority of the snaps, having run ahead of Keke Coutee all season.

Carter isn’t a massive target at 5-8, but he did post a 43.2 percent (87th-percentile) College Dominator Rating at Sacramento State and has a 129.4 (97th-percentile) SPARQ-x score. He has also caught 11 of his 14 targets this season for 162 yards, including six receptions for 65 yards in Week 17, and is active in the return game.

Carter would fill the slot role as Deshaun Watson’s underneath target and has a chance at a return touchdown, so stacking him with the Texans D/ST can return double points if that were to happen.  If Fuller or Stills can’t make it onto the field, he’ll be the best cheap WR option on the board.

In his first game without Zach Ertz, Dallas Goedert played 100-percent of snaps for the first time this season and saw 10 targets. That makes 22 targets over the last two weeks, with the Eagles being limited in passing game options.

Goedert will continue to have a massive role in this offense, especially if Ertz can’t play this week. According to Pro Football Doc, Ertz should be held out for at least a few more weeks with his ribs and a lacerated kidney. It would be irresponsible to let him see the field, being only one hit away from serious organ trauma.

The Seahawks have allowed the second-most receptions and receiving yards to tight ends this season. Goedert will effectively operate as the alpha receiver in this passing game. He will be the chalk in cash and tournaments, but it’s hard to fade his role in this matchup.

Jared Cook makes the most sense for those who want to pivot off Dallas Goedert. He’s at home and playing in a dome, with his team having the highest implied total on the slate. He’s also shown a nose for the end zone with Drew Brees throwing him the ball, scoring seven touchdowns in his nine full games with the future Hall of Famer.

Brees is likely to throw multiple touchdowns in this game and Cook is a good bet to secure at least one. That’s all we really need for a fantasy tight end.