Each week, fantasy players question which of their players to insert into lineups and which to bench for that week. A key component in that process is highlighting easy or difficult matchups for players. While an easy matchup does not guarantee a player to have a great performance, it’s certainly a better bet. In this weekly piece, I shine the spotlight on a few different matchups to keep an eye out for as you make your lineup decisions. This is the Matchup Monitor Week 12, Thanksgiving Edition!

The Falcons entered Week 11 allowing the No. 3-most fantasy points to WRs. Atlanta’s secondary has struggled all season. They only looked a little better recently due to facing the subpar Bears and Panthers the last two weeks. However, they allowed four 100-yard receivers in three weeks prior to that.

Terry McLaurin will likely draw A.J. Terrell as a matchup. That leaves Curtis Samuel and Jahan Dotson to feast on the rest of the struggling Atlanta secondary. Dotson just returned from injury and is beginning to ramp up while Samuel’s versatility both running and catching the ball has been on display the entire season. If you are considering starting either receiver, take your shot with them this week against the lowly Falcons’ defense.

Potentially Tampa Bay’s new starter, Rachaad White has 33 touches over his last two games. He has at least three receptions in five games this season with 6.8 (No. 22) yards per reception. Leonard Fournette left the last game due to injury, but even before that, Fournette was ceding opportunities to White. Young and shifty with 84th-percentile or higher Speed and Burst Scores, White has the chance to boom this week.

Have A Day, Rachaad White! #NFLMunichGame

Cleveland has allowed over 100 yards rushing to opponents in four straight games, yielding eight rushing touchdowns in that span. The Browns have also allowed at least four RB receptions in four of their last six games. With White gaining opportunities and facing a defense allowing plenty of RB opportunities, he is a good gamble for Week 12.

The Seahawks have a gem in Geno Smith who has an 8.3 (No. 1) Accuracy Rating and 77.7-percent (No. 1) True Completion Percentage. Smith has five top-12 finishes this season, dipping below 14 fantasy points just twice.

Las Vegas entered Week 11 allowing the No. 3-most fantasy points to QBs. The Raiders have just one interception to six passing touchdowns allowed over their last five games where they faced Davis Mills, Andy Dalton, Trevor Lawrence, Matt Ryan, and Russell Wilson. None of these quarterbacks are as good as Smith this season. Vegas has a mediocre secondary without a top-40 CB in PlayerProfiler’s CB rankings. smith has 36 (No. 8) Deep Ball Attempts this season. Expect those to connect more than usual this week against an average-at-best defense.

As Buffalo’s slot receiver, Isaiah McKenzie has not made a huge fantasy impact. He has just one top-12 finish this season. However, if you are looking for a Thanksgiving sleeper, McKenzie has the matchup to make it happen.

The Lions have allowed over 290 passing yards in three of their last four games. They just allowed 100 yards to slot receiver Wan’Dale Robinson. Mike Hughes, Detroit’s primary slot corner, has a negative Coverage Rating this season. McKenzie is in a sweet spot for fantasy production this Thanksgiving against a soft defense.

The Chiefs’ backfield is now a combination of Isiah Pacheco and Jerick McKinnon with a little Clyde Edwards-Helaire. Pacheco has looked good, but he does not get many looks in the passing game with just three targets all season. He had a 21.7-percent (No. 73) Snap Share entering Week 11. Pacheco has gotten more snaps lately but still has not surpassed a 60-percent Snap Share with McKinnon splitting much of the work. 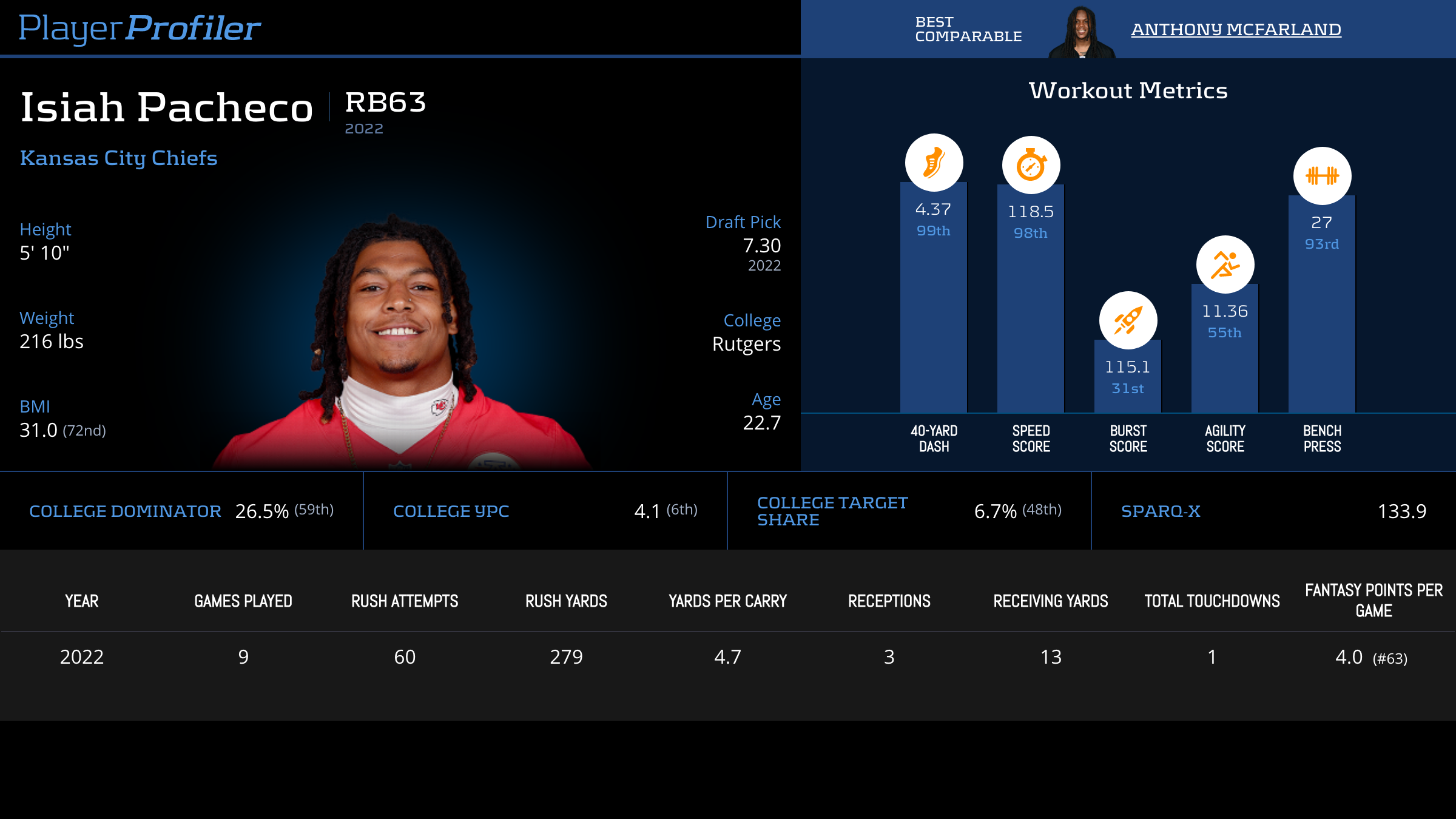 The Rams entered Week 11 allowing the No. 29-most RB fantasy points. They haven’t allowed a team to rush for over 100 yards each of the last three weeks. Kansas City’s strength is Patrick Mahomes and the passing game. Pacheco can chew up yardage if the Chiefs get a sizeable lead in this game, but don’t expect a breakout game. Exercise caution with Pacheco, who is touchdown dependent with little-to-no receiving work.

1st in fewest missed tackles on the rush (23)

The Jets’ defense is the strength of the team. New York’s secondary has allowed just one touchdown to an opposing WR over its last four games. Sauce Gardner and D.J. Reed have been excellent, both ranking in the top-25 of PlayerProfiler’s CB Rankings.

This season, Darnell Mooney has no top-12 WR finishes, with two top-24 finishes. He has seen over seven targets twice with two total touchdowns in 2022. Justin Fields and the Bears’ offense has looked better recently, but Fields may not play Week 12 due to injury. Mooney is likely to face Gardner who has been locking down receivers as a rookie. With Fields questionable, and an elite CB across from him, it’s not looking like a productive week for Mooney.

Entering Week 11, San Francisco was allowing the least fantasy points to TEs on the season. The 49ers have allowed just one TE touchdown this season coming in Week 6. They have not allowed over 50 TE receiving yards over their last three games either. Fred Warner, Dre Greenlaw, and the rest of the defense have been effective in covering the middle of the field.

Since returning from injury, Michael Gallup has not produced as hoped for fantasy managers. He has just one game with double-digit fantasy points this season. CeeDee Lamb is Dak Prescott‘s No. 1 target and that isn’t changing any time soon.

The Giants have allowed three touchdowns to opposing WRs over their last five games. Dexter Lawrence leads a dominant defensive line that will get pressure on Prescott while the secondary will continue to reap the benefits of a good pass rush. Gallup sees limited chances for Dallas, and faces a solid defense, making him an avoidable player on Thanksgiving.