This is the Air Yards DFS Value Index for Week 12! Since there is a Thanksgiving Day slate and a Main Sunday slate we are doing things a little differently so as to provide commentary on both slates.

The best value Air Yards play on the week is always scored with a value of 100. All other players are compared against that player with decreasing value. This list is not a mere recitation of where each player is ranked — a simple machine could do that. The list contextualizes each player’s Value Score to present the top ten Air Yard values in DFS for the week focusing on players priced at or below $5,500 on DraftKings. For this week, since there are two slates, there are two separate models with two separate valuations.

We will highlight two wide receivers on the Air Yards Value Index priced above $5,500. One is playing Thursday, and the other is playing on the Main slate. Then, our focus will shift to the top nine Air Yards value plays priced at $5,500 or below on DraftKings.

Justin Jefferson had one of his worst fantasy outcomes of the season last week finishing as the WR53 amassing only 6.3 fantasy points and seeing only five targets. While this type of usage is concerning it is not the norm for Jefferson who is among the league leaders with 105 targets (no. 3) and 21.6 fantasy points per game (no. 5). I don’t think fantasy players are actively fading him this week, but if you are hesitant to spend up for him, remember this catch against the Bills and the 35.3 fantasy points he scored two weeks ago and get him in your lineup.

Gabriel Davis has averaged over 100 Air Yards and seven targets in the past four weeks. How a wide receiver ranked inside the top 25 scorers at the position in fantasy points per game is priced below $5,500 is unknown to me. He is also playing in a game with the highest projected point total not just on the Thanksgiving slate but on the entire week. If you loved Will Fuller on Thanksgiving two years ago against the Lions when he scored 35 plus fantasy points in Detroit, you are going to love Gabe Davis like your favorite pie. Get him in every lineup on Thanksgiving!

Hopefully, this is a sign of things to come as Olave’s usage has waned since his Air Yards model-breaking performance to begin the season. I personally have to see it again before I play him in anything more than cash games.

Drake London‘s 27.1 target share is No. 13 best among all wide receivers in the league. Unfortunately, this continues to not translate to consistent fantasy production thanks to the poor quarterback play of Marcus Mariota and the run-heavy offense he plays in. Even with Kyle Pitts missing the remainder of the season, and presumably more targets headed London’s way, he simply can’t be relied on for any more than a desperate cost-savings play in cash games.

Brandin Cooks has averaged just under double-digit fantasy points (9.1) in his two games with the Texans after the trade deadline. In this two-game sample he has outgained teammate Nico Collins by 15 Air Yards on four fewer targets. Both Collins and Cooks seem to be in a 1A – 1B receiving role in the Texans’ passing offense. Cooks is the higher-priced cash game option.

As discussed with Brandin Cooks above, Nico Collins and Cooks are in a timeshare for WR1 opportunities in Houston. 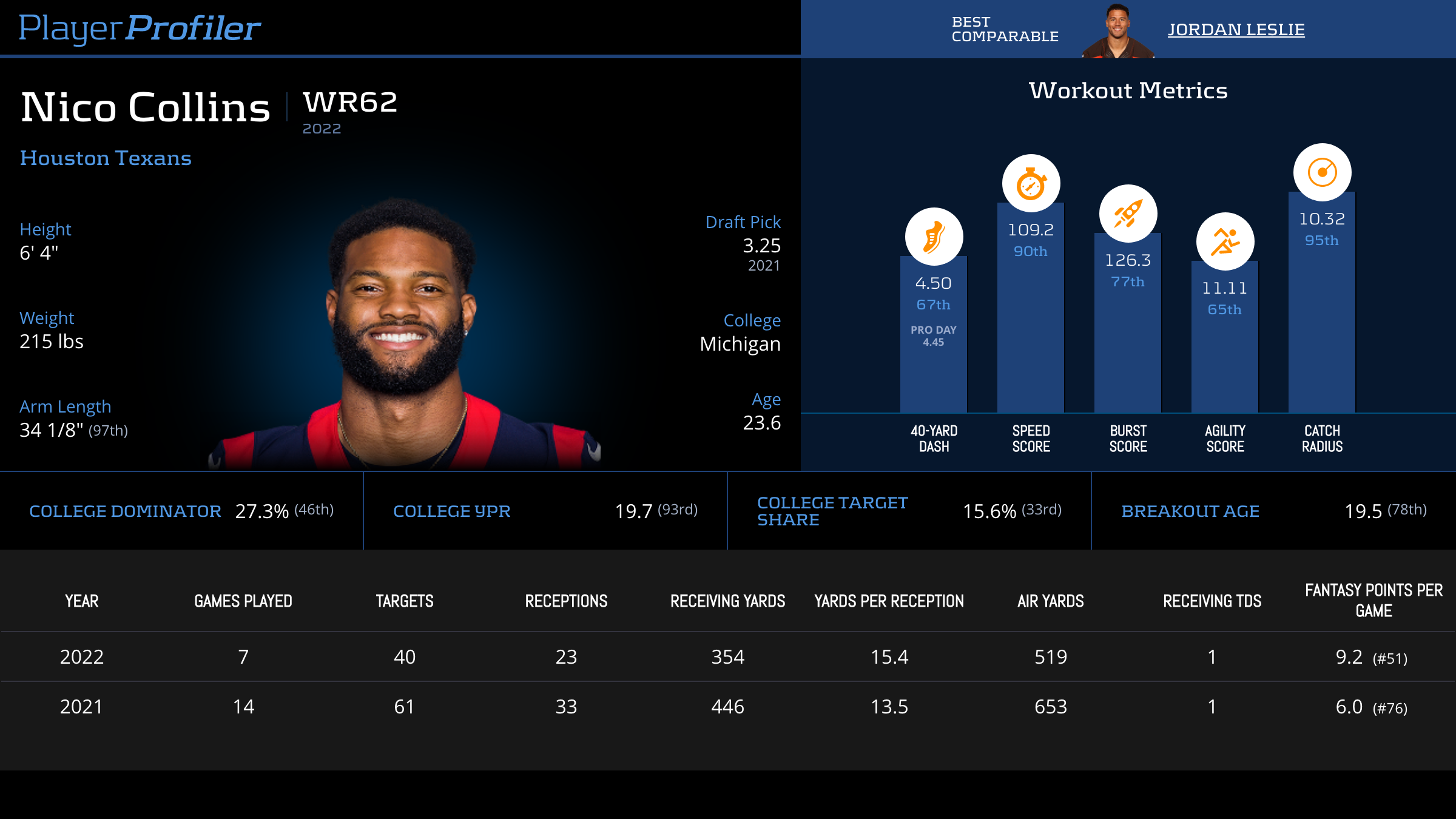 With the Texans turning to Kyle Allen at quarterback this week, this dynamic could change, and with Collins priced $1,100 less than Cooks, he is the receiver I would prefer exposure to if forced to choose in the hopes Allen focuses his attention on Collins.

Donovan Peoples-Jones dominance continued last week. Peoples-Jones has now finished as a top-24 WR in two consecutive weeks.  He has posted double-digit fantasy points in the past five games and has averaged 85 Air Yards during this time. Fire him up in all formats again this week.

Marquise Brown is eligible to return this week just as he was last week when he ultimately did not suit up for the Cardinals’ Monday night game. Let this blurb serve as a friendly reminder that Brown averaged 18.3 (no. 8) fantasy points per game to start the season and averaged 98.2 Air Yards per game. Assuming he plays, he is someone I want some tournament exposure to even with him sharing a field with DeAndre Hopkins for the first time.

Mack Hollins finished with 11.2 fantasy points last week after seeing 70 Air Yards. He has averaged 87.5 Air Yards the past four games and is the clear second target in the Raiders passing game behind stud Davante Adams and is best utilized as a cost savings boom-bust tournament play.

Darnell Mooney‘s fantasy viable hinges on the literal shoulders of Justin Fields. During Fields’ breakout, which began in Week 9, Mooney has averaged just over 13 fantasy points per game. 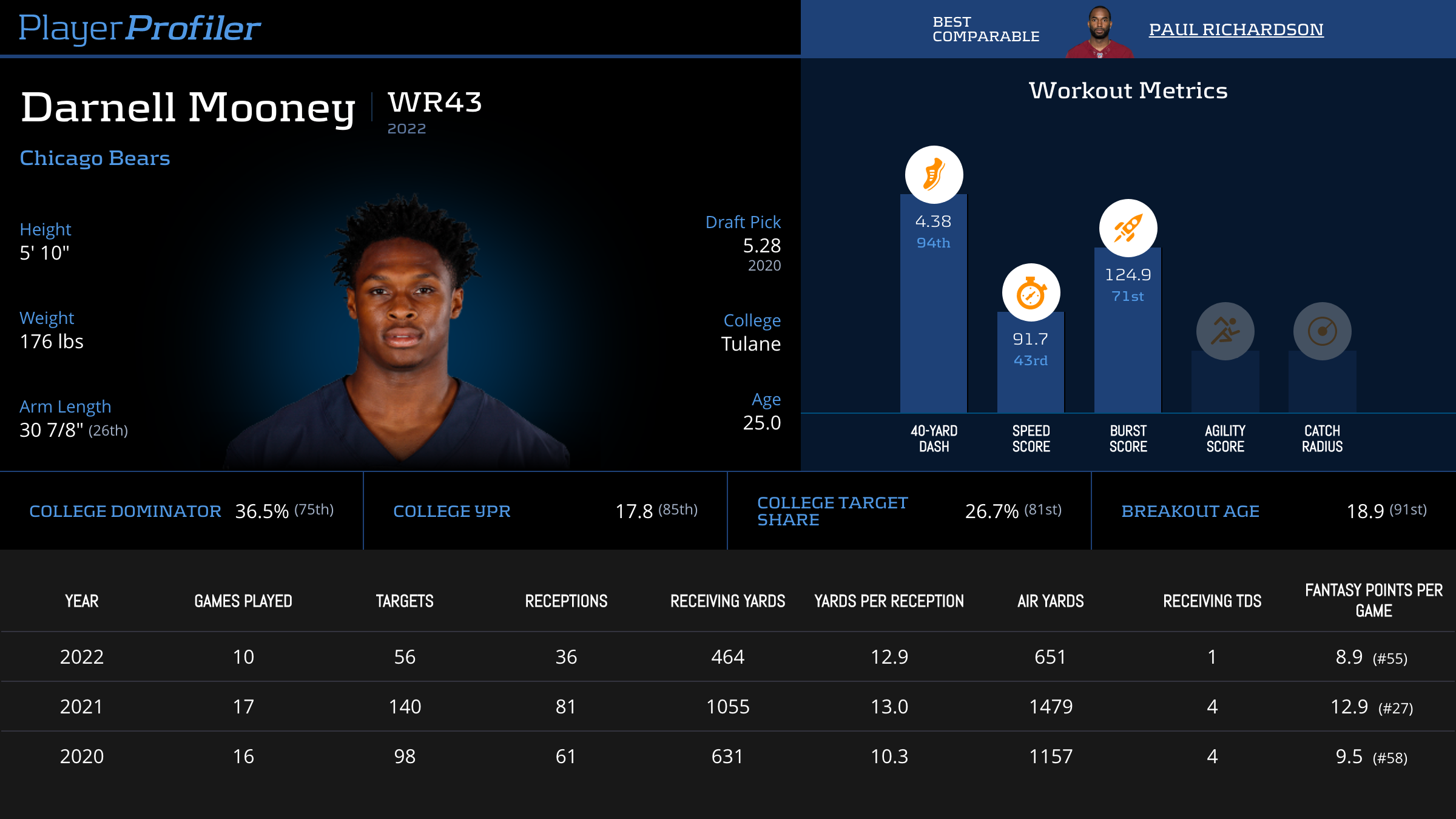 He has seen four red zone targets since this time, scoring two touchdowns. If Fields is able to start, Mooney is a recommended play in all formats.

Marvin Jones has been as boom or bust as they come with unfortunately more busts weeks than boom weeks. Regardless, as the only downfield threat in the Jaguars’ offense, as evidenced by his 14.4 Average target distance (no. 7), Jones is worth some exposure in tournament lineups as a cost-savings option.

D.J. Moore will be playing football with his fourth quarterback this season. Perhaps the fourth time is the charm?  It is unlikely though that Sam Darnold provides any relief to the miserable fantasy season that Moore has had so far this year. Add the Broncos’ defense to the equation and you have a player that I’m fading despite being the best Air Yards value play of the week. Moore is a galaxy brain contrarian play this week.

Good luck to everyone in Week 12. May all your Air Yards be realized. Have a Happy Thanksgiving.