With the 2021 NFL Season fast approaching, time is running out to take one more shot at a $1,000,001 top prize in Underdog’s Best Ball Mania II. By studying historical win rates for Best Ball Mania I and applying PlayerProfiler’s analytics with DFS concepts, we are able to gain a valuable edge.

(Best Ball win data was gathered from this table.)

The TE13 drafted by UnderDog ADP, Jonnu Smith finds himself in a good position to help both the Patriots and your Underdog squad in 2021. In a large field tournament like Best Ball Mania II, spike weeks from lightly owned players are critical difference makers.

A look back at 2020 Best Ball Mania I Team Advance Rates reveals such a difference maker in Robert Tonyan. Despite being drafted on only 4-percent of teams, Tonyan’s 2020 production helped advance 39-percent of those teams. Last season, Tonyan and Smith shared the league lead in Tight End Touchdown Rate each with a 21-percent clip. Tonyan’s unsustainable 88.1-percent (No. 1 among qualified tight ends) Catch Rate proved to be the difference maker, despite Smith outperforming the former in both Red Zone Target Share and total targets. Positive regression is in store for Smith though after Tennessee’s overcrowded offense was exchanged for one desperate for playmakers.

Two of the top five players that helped advance Best Ball Mania I teams last season were rookies Justin Jefferson and Chase Claypool. Both rookies were taken early in the NFL Draft, yet selected late in Best Ball Mania I. Similarly, both rookies were buried on their respective teams’ initial depth charts to begin the season. In searching for a rookie who checks these boxes in 2021, let’s consider Elijah Moore. 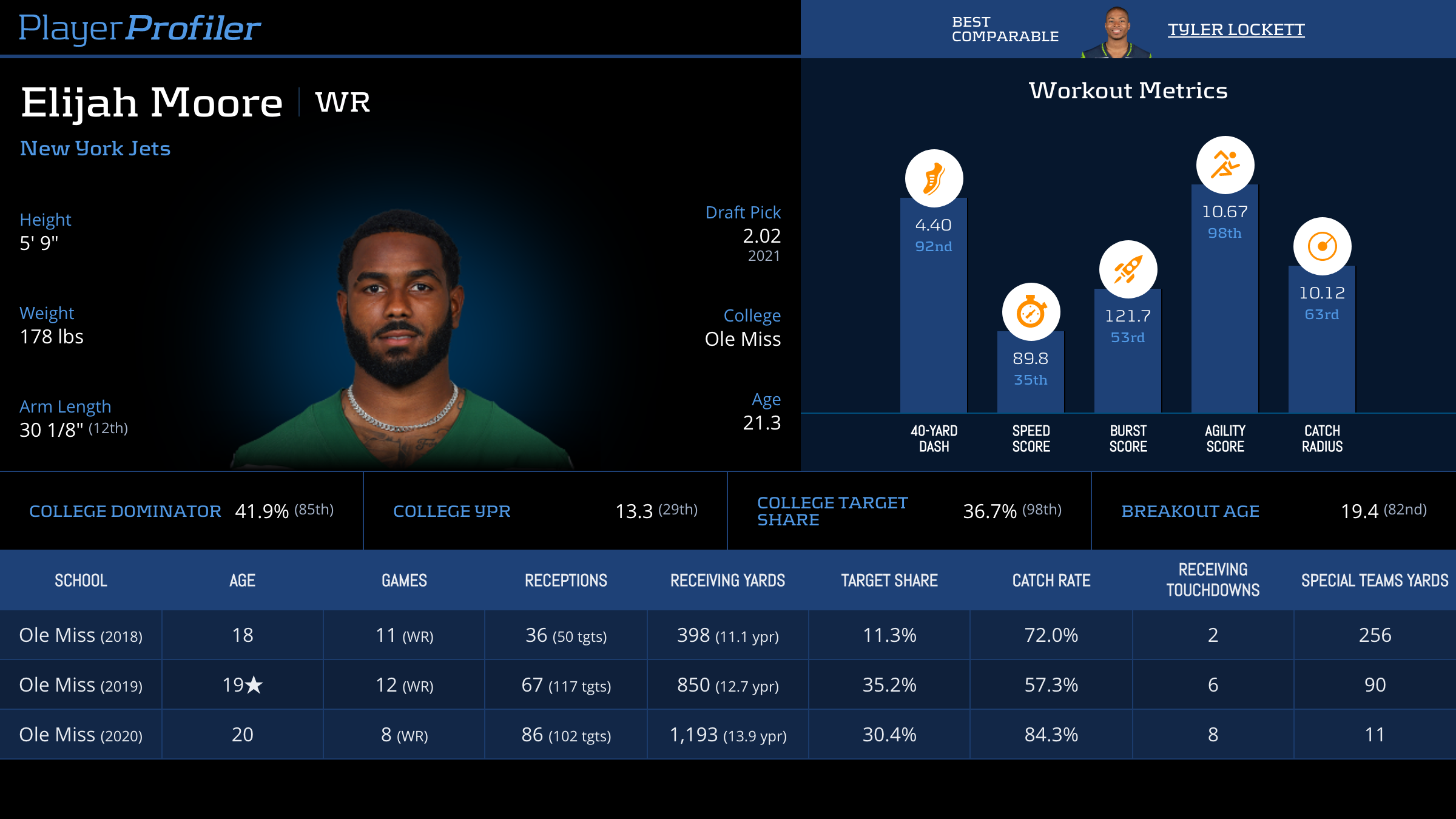 PlayerProfiler sharps have been all over Moore (currently No. 3 in the Player Popularity Index) and for good reason. Moore was drafted as the 2.02 in the 2021 NFL Draft after logging back to back 100-plus target seasons at Ole Miss. He outproduced both Jefferson and Claypool with a 36.7-percent (98th-percentile) College Target Share and 41.9-percent (85th-percentile) College Dominator Rating. Expect his ADP to continue to climb as his talent vaults him up the Jets’ depth chart.

Forecasting talent to overtake mediocrity paid dividends for Justin Herbert drafters last season. Given it happened sooner than expected (thanks to the Chargers’ medical staff), drafters who were bullish on the talented rookie advanced at a 31-percent rate. An intriguing rookie prospect behind an uninspiring incumbent and with whom high draft capital was invested this season is Trey Lance.

While I’d love to pepper in some advanced analytics here, the sample size we’ve been given is quite small. Therefore, let’s take a look at some raw data. Lance flashed in his sophomore campaign at North Dakota State, going off for 2,786/28 through the air and 1,100/14 on the ground. His 9.7 (90th-percentile) College YPA was otherworldly. This kind of dual-threat production, paired with weapons like George Kittle, Brandon Aiyuk, and Deebo Samuel will be dangerous. If he can make eight-plus starts, he’s a strong play given his playmaking ability and could absolutely smash his ADP. Keep in mind too that Jimmy Garoppolo missed 10 games with a pair of ankle injuries last season alone. It’s only a matter of time before we see the athletic rookie under center and someone who took advantage sees $1,0001 in their Underdog balance.