In fantasy baseball, one strategy involves drafting backward or building a draft from the back. So what’s that mean? Essentially, it’s an attempt to find players that could provide similar production. Or find players with similar skills to a player going earlier in drafts.

We can use this same strategy in fantasy football leagues while pairing this with ideas relating to narrowing down the player pool to your player targets. After discussing the drafting backward strategy, I’ll discuss later ADP player alternatives. When studying ADP and preparing for fantasy drafts, we want to stay the course even in the late rounds instead of “wasting” picks on players with limited upside.

One of the components of this draft strategy involves scouring the player pool to identify players earlier and later in drafts that may have skills you can’t find at other parts of the draft. For instance, we know some of the top-12 running backs in ADP projects to have the rushing and receiving volume that’s hard to find later in drafts. Unless that running back struggles or suffers an injury, it’s likely difficult for the team’s RB2 to eat into much of the opportunity and production.

Let’s touch on the idea of having a difficult time finding elite receiver production later in drafts. Take the zero RB strategy, for example. We want to take elite receivers or tight ends early because that production isn’t readily available in the middle to late rounds, or we need to hit with player targets later. Many of us have heard of the running back dead zone, but the wide receiver dead zone also exists. Granted that these visuals below apply to best-ball leagues, but these also translate to redraft leagues.

Using the RotoViz Best Ball Win Rate Explorer, we see Rounds 4-9 show evidence of the RB dead zone. These heat maps help us visualize where we can find positional fades and values with data from 2017-2020. 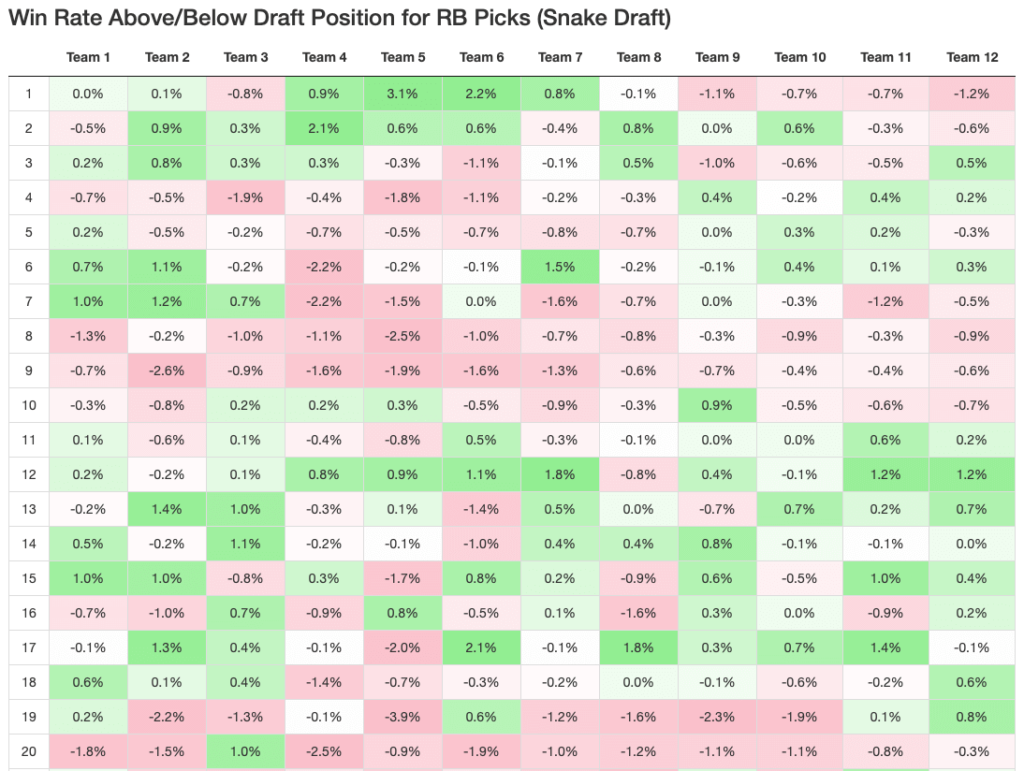 Meanwhile, from Rounds 8-11, we notice a WR dead zone, where the best ball win rate makes it a bit trickier to find league-winning receivers in that ADP zone. 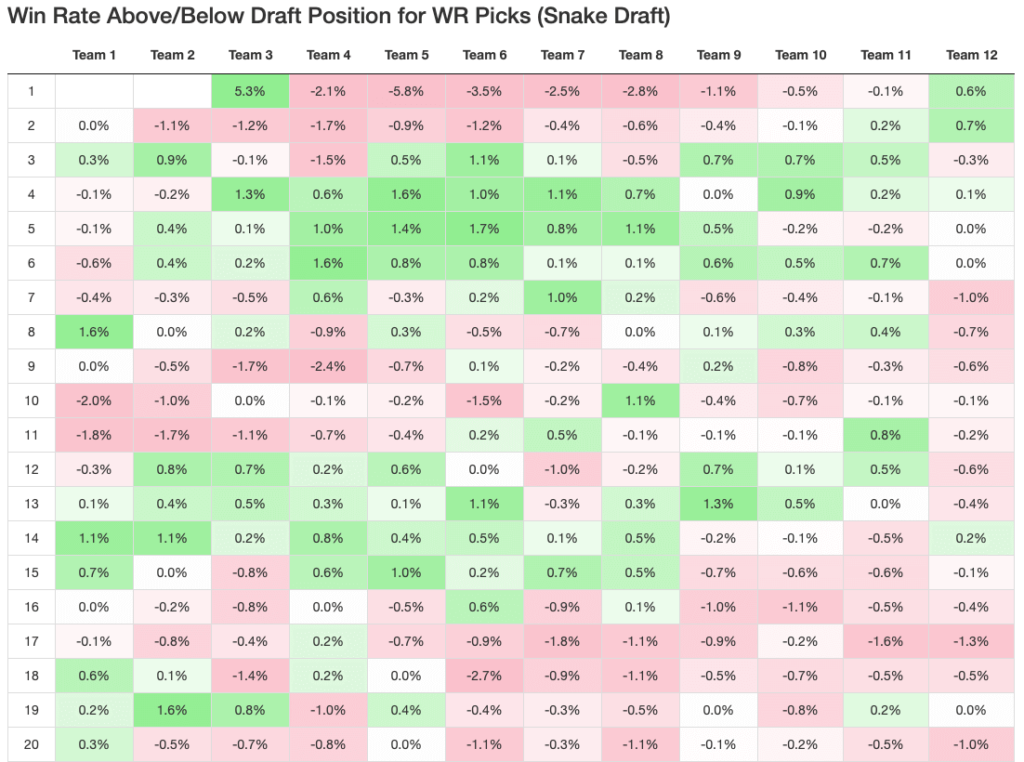 So why’s this data relevant?

Knowing where you can find an edge during drafts based on positions to target or avoid can help set you up for success. Sure, roster construction, league settings, and all that matter as well. However, if the data indicates we should avoid the RB or WR dead zone, that means we may want to have player targets outside of those ADP ranges.

That doesn’t mean to avoid all running backs or receivers in those areas of the draft, but rather make sure you have positional targets and don’t reach too much to fill a roster spot. Admittedly, I’ve made this mistake before, but filling your RB2 roster spot with a “safe” player isn’t smart if you passed on a player with more potential to explode based on the efficiency or paths to volume.

In an attempt to not give away too many player targets and alternatives, we’ll provide three interesting players with a later ADP. Of course, we’ll provide data to back up the reasons and potential concerns given their profile.

As WR23 in the World Famous Draft Kit rankings, Moore boasts the opportunity and ability to produce WR1 type numbers. One example player that comes to mind includes Stefon Diggs. With the Vikings in 2018, Diggs racked up a career-high (at the time) 102 (No. 8) receptions for 1,021 (No. 17) receiving yards.

One player I don’t want to leave my draft without is Moore. Of course, Diggs sits on that list because he possesses “the overall No. 1 receiver” within his range of outcomes. Overall, Moore looks like a receiver in the early rounds that can provide WR1 type production, and it’s reasonable for him to take the leap in 2021.

If fantasy managers started drinking the zero RB juice (like myself), Phillip Lindsay looks like the perfect target with an Underdog ADP as RB45. When analyzing an article on points per game studs in 2020, I noted David Johnson, the current Texans starting running back. Surprisingly, Johnson finished efficiently with 5.6 (No. 7) yards per touch and a +9.4 (No. 16) Production Premium. Potentially, both Lindsay and Johnson could serve as player targets when implementing the drafting backward strategy.

Can the 29-year-old Johnson continue the production in 2021? When we add in the potential for the Texans offense to struggle, it leads to more questions surrounding the backfield. After back-to-back 1,000 yard rushing seasons with an average of over three targets per game, the Broncos relegated Lindsay to the backup role behind Melvin Gordon.

Although Lindsay lacked efficiency last year with 4.2 (No. 53) yards per touch and a -30.9 (No. 77) Production Premium, he showed the 4.44 (92nd-percentile) 40-yard dash speed with the 6.8-percent (No. 5) Breakaway Run Rate. His ADP makes him someone to stash with potential weekly viability. If Johnson struggles or suffers an injury, Lindsay’s stock rises with the potential to garner similar opportunities to his first two seasons in the NFL. Other running backs to avoid going earlier and target Lindsay include Devin Singletary and Leonard Fournette.

Why draft Mecole Hardman at pick 85.9 as WR41 when you can draft K.J. Hamler as one of your last-round picks? All kidding aside, a pass-catcher paired with Patrick Mahomes isn’t comparable to Drew Lock or Teddy Bridgewater. However, let’s look at this from a skills standpoint. Hardman’s ADP feels high given the other players around him, including Brandin Cooks, Michael Carter, Jarvis Landry, and Raheem Mostert. 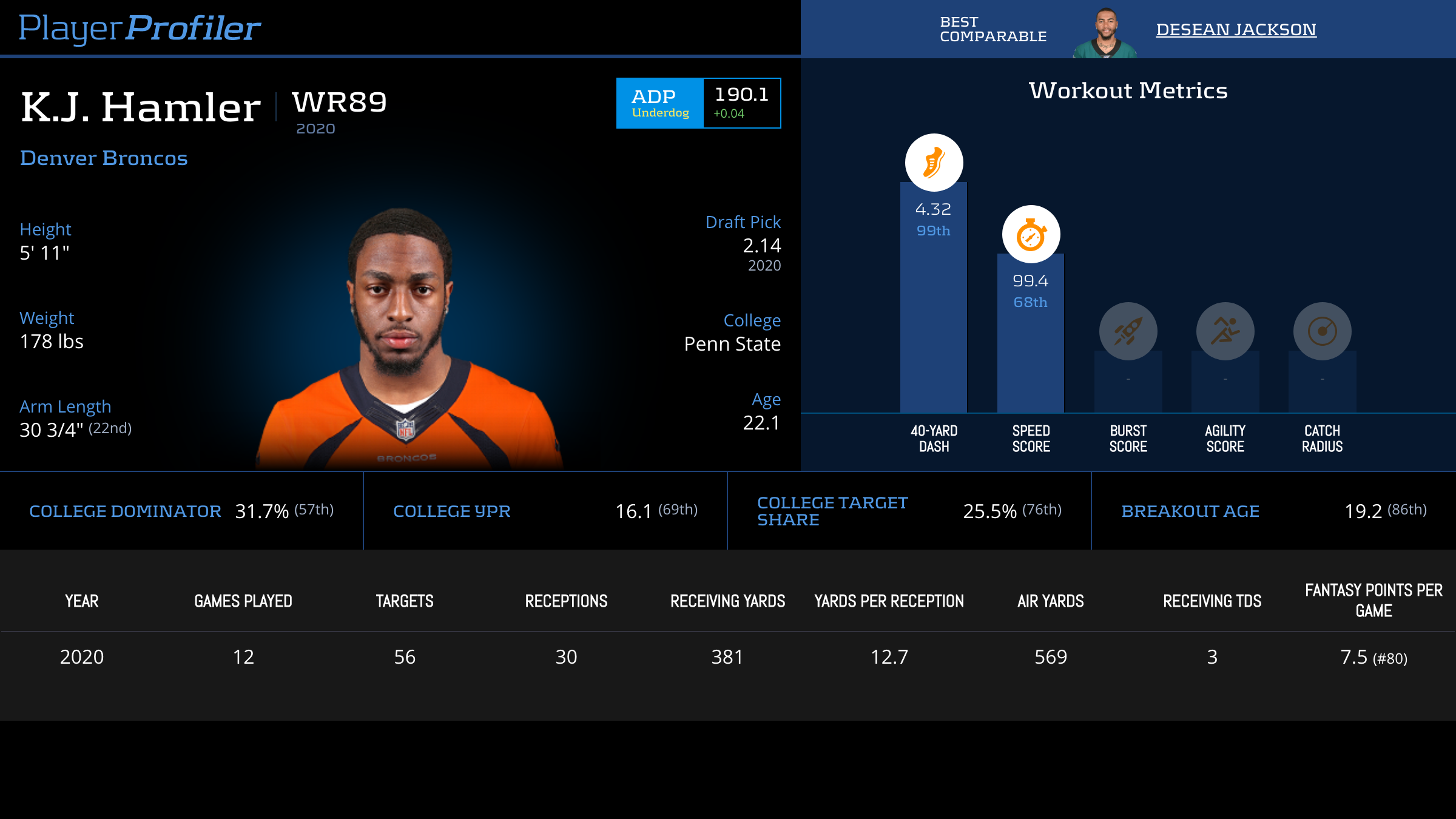 Hamler’s Best Comparable Player being DeSean Jackson fits the speedster profile. Although his 99.4 (68th-percentile) Speed Score isn’t so hot, his 4.32 (99th-percentile) 40-yard dash and 19.2 (86th-percentile) Breakout Age checks of a couple of boxes.

In Week 1 of the preseason, Hamler flashed that elite speed for an 80-yard touchdown from Lock. Although I’m not high on Lock, I love Jerry Jeudy and Hamler, and I’m hopeful the Broncos quarterbacks keep the trios of receivers afloat, including Courtland Sutton. Sure, it’s a significant difference from Mahomes to Lock or Bridgewater. However, Hamler possesses similar skills and almost identical upside as Hardman, yet goes near 100 picks later. Use the drafting backward strategy to scour the player pool and prioritize Hamler as one of your final-round picks.

To wrap this up, let’s sum up the main points.