As we press on into mid November, we are back with another installment in the weekly QB WR stacks series. In this piece we dig into the advanced stats and metrics only found here at PlayerProfiler to identify high upside combinations of QBs and WRs from the same team to play together in GPP tournament lineups. This tactic gives our lineups a higher ceiling given the positive correlation between the teammate scoring. Since this is a piece focused on tournaments, we have to consider the projected popularity of the plays as well. We’re specifically looking for under the radar or leverage options based on what the rest of the field is likely to do.

Last week our first stack keyed in on a leverage point in the Chargers Vikings game. As we projected, Justin Herbert was the more popular play of the QBs in that game. By going with Kirk Cousins and Justin Jefferson, we saved salary in our lineup, played a less popular player (sub 3% roster share), and scored more points. That’s exactly what we’re looking for each week. Cousins scored 18 to Herbert’s 13, and Jefferson only had a 5% roster share as well.

The second stack aimed at avoiding recency bias towards the poor Buffalo Bills performances over the last few weeks. We recommended paying up for Josh Allen but pairing him with his cheaper WR, Emmanuel Sanders. The bounce back game did happen for the Bills; unfortunately, the touchdowns were disproportionately scored on the ground. Four different Bills scored rushing TDs which severely limited the ceiling of the passing offense. Allen was still productive and fairly popular with nearly 25 DK points at 10% played. Sanders didn’t get much going through the air while Stefon Diggs had a vintage target hog day we hadn’t seen much this year.

Finally, Carson Wentz and Michael Pittman combined for our third stack of the week. In a sloppy game against the Jags that featured an early special teams touchdown, the Colts were content to take the air out of the ball and grind clock. That limited both Wentz and Pittman as they finished with 7 and 12 points respectively. This stack became a popular “contrarian” stack as the week went on too which caused the popularity to spike. Wentz saw double digit play while Pittman went as high as 25%. Both of these last two stacks feature the downside risk in playing double digit favorites.

This week sets up to be a fun one for DFS. We have a truly marquee matchup in the Chiefs-Cowboys game featuring a 56 point total that seems to be the fulcrum point of the slate. Fantasy gamers are salivating at jamming in Dak Prescott, Tyreek Hill, and others in that game to build mammoth game stacks. Both QBs will likely lead the slate in roster share at the QB position.

The interesting thing about this week is the other two late window games have totals around 50. They’re exciting in their own right.

That creates fun late swap possibilities based on how you construct your lineup.

If you leave the QB and at least another spot open for the late window, you can feel out during the early games if you’ll need to get unique to catch up at QB or if you’re way ahead, eat the chalk and prevent the field from catching up.

Jakob Sanderson laid it out really well last week in his Pareto Principles series. It can be ok to play a chalky stack in tournaments if you’re building the rest of your lineup with that in mind. You need to play contrarian leverage plays, so that when your popular stack hits, you still have differentiation that can lead to wins. The other way to go is with a unique stack that allows some of the more popular one-off plays. In either case, it’s a barbell approach to roster share among your lineup. A mix of heavily and lowly rostered players creates more tournament winning upside than a full lineup of medium rostered players even if cumulative roster share is the same.

This is getting away from the specifics of Week 11, but it’s important that I acknowledge that validity of playing popular stacks. Usually in this space I mention the popular games as ones that I’m avoiding. Since I’m only discussing the stack itself and not the rest of the lineup, I tend to leave the popular stacks out of these recommendations. That is, of course, only one way to build DFS tournament lineups.

Building off that strategy we just talked about, let’s kick off the stacks this week with the Bengals. They play in the late window giving you that flexibility based on how the rest of the roster performs early. With a 25.5 point implied team total, there certainly projects to be opportunity for a blow up fantasy performance from these two.

Joe Burrow is a good example of the reason we put so much stock into team and game totals. Unlike last year, Burrow is not among the league leaders in passing opportunity. In fact, the Bengals’ 32.2 Team Pass Plays per Game rank only No. 24 Burrow ranks below league average among qualified quarterbacks in Deep Ball Attempts (No. 18) and Red Zone Attempts (No. 21). This year, efficiency is the name of the game. With 8.7 (No. 2) Yards per Attempt and 17 (No. 10) Money Throws, Burrow is consistently making big plays. Now in a game with a large total, we’re expecting that volume to jump up a bit, while ideally maintaining that same efficiency resulting in a huge day for fantasy. 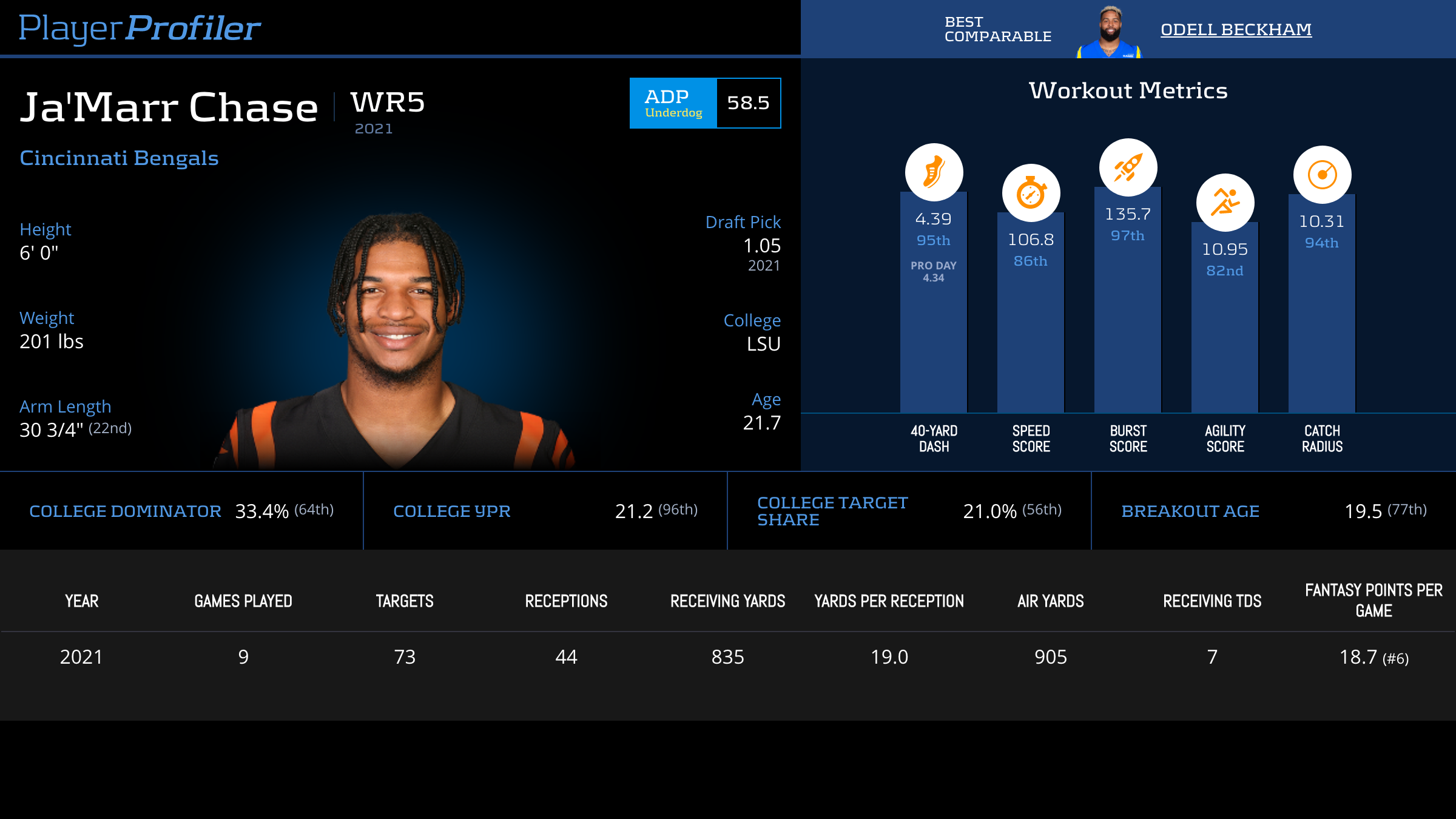 Who has Burrow been hooking up with for these splash plays? Ja’Marr Chase of course. You may have heard they were college teammates when they re-wrote the record books together. They haven’t missed a beat this year. Chase’s 17 Deep Targets rank No. 5 while his 41.9-percent Air Yard Share ranks No. 4. He’s consistently making big plays down the field and can break a slate any week.

This next stack plays on the same idea. Russell Wilson returned from injury last week to decidedly unexciting results. With another week of practice and recovery under his belt, hopefully this is the game he gets back on track. Undoubtedly there is risk here as Wilson looked skittish with only 4.0 Yards per Attempt, his lowest of the season. There is reason for optimism, however. Wilson threw the ball 40 times as the Seahawks cannot effectively rush the ball. He was throwing deep as well. He had a massive 468 Air Yards which was not solely the product of elevated passing volume. His 11.7 Air Yards per Attempt were his second highest of the year. That deep passing and low projected roster share combine for an intriguing pivot option at QB.

Regardless of who’s throwing him the ball, D.K. Metcalf continues to make big plays. He’s been priced down a touch by DraftKings at only $6.8k this week but still has that 100-plus yard, 2-plus touchdown upside. This is a game environment as underdogs to the Cardinals where he will need to be involved. Ranking in the top 10 in several efficiency stats like Dominator Rating, Fantasy Points per Target, and Fantasy Points per Route Run, this is another case where even a slight volume uptick coupled with elite efficiency can produce fantasy ceiling games.

Another way to play it this week is to avoid the late window by outscoring it early. Lamar Jackson has demonstrated time and again he has highest scorer on the slate upside. Weather concerns and missed practice due to illness will suppress his popularity. With Dak Prescott, Patrick Mahomes, Josh Allen on the high end and Tua Tagovailoa and Cam Newton on the cheaper end, Jackson could realistically be outside the top five most popular QB plays this week. It’s a rare opportunity to get this upside at this projected roster share.

Given the weather and the spread, this doesn’t look like a week to double stack Lamar. With the popular narrative running around fantasy Twitter about Rashod Bateman being the new WR1 in Baltimore, a $7.1k Marquise Brown should also see surprisingly little play given how elite his role has been lately. Brown leads the league with 21 Deep Targets but is also top 10 in Yards after the Catch (266 is No. 7). He’s commanding over nine targets per game (No. 11) with a huge 1008 (No. 4) Dominator Rating total. There are few stacks with more upside than these two. Given the roster share discount, you can mix these with the chalkier “best plays” in the rest of your lineup to achieve maximum scoring upside with the requisite differentiation for tournament winning upside.