Featured as a market mover back in Week 6, D’Andre Swift’s stock has been on the rise for a while. In Week 10, Detroit’s coaching staff finally handed him a full workload. Not surprisingly, he didn’t disappoint and his dynasty stock hit dance party levels.

Swift dominated the Detriot backfield with a 77.8-percent Snap Share, 16 carries, five targets and 21 routes run. He turned that into 149 total yards and a touchdown, good for 25.9 (No. 4) fantasy points. A cornerstone of dynasty rosters, Swift has moved up two spots to RB3 (No. 3 overall) on PlayerProfiler’s dynasty rankings. Sadly, we’ll have to wait at least a week to see him return to action due to a concussion.

A former slot receiver at Arkansas State, J.D. McKissic has been a target hog. Through Week 10, his 41 (No. 3 among qualified running backs) receptions has him second on the Football Team to Terry McLaurin. McKissic trails only Alvin Kamara in receiving yards and Target Share at the position. With WFT often facing negative Game Script, he is also seeing ample opportunity. He’s recorded a 57.4-percent (No. 22) Snap Share over nine games, with a season high of 85.4-percent in Week 9 against the Giants.

Averaging 10.2 (No. 34) Fantasy Points per Game and finishing as RB12 or better in three of the four past weeks, McKissic has jumped 15 spots on the dynasty rankings to RB42.

At 15.6 (No. 16) Fantasy Points per Game, Tee Higgins leads all rookie wide receivers. His 603 (No. 19) receiving yards place him second in receiving on the Bengals and second to Justin Jefferson in the rookie race. Over the last two games, Higgins has seen 18 targets, which is three more than Tyler Boyd and eight more than fading A.J. Green. The rookie has also led the Bengals in receptions and receiving yards over this span.

Higgins gained 19.88 Lifetime Value points to move up five spots to WR12, making him the biggest riser on the dynasty rankings. With Green set to hit free agency in 2021, the Joe Burrow-Tee Higgins combination is an exciting one for dynasty owners.

Since Week 7, Jakobi Meyers has seen a Snap Share of 94.6-percent, and all he’s done with it is score double digit fantasy points with a 16.7 per-game average. Despite only appearing in five games, Meyers leads the Patriots with 353 (No. 60) receiving yards and 28 (No. 60) receptions. Ok, it’s not a prolific passing attack, but Cam Newton does appear to have a connection with the 24-year-old undrafted converted QB. Meyers holds a 27.3-percent (No. 7) Target Share and a 27.3-percent (No. 7) Air Yards Share. He moves from WR60 to WR50 in the dynasty rankings.

In a position where there’s a canyon between Travis Kelce and everyone else, Hunter Henry was the biggest gainer in Lifetime Value points for the tight end position. This resulted in a jump to TE7. His opportunity metrics include top 10 marks with an 88.1-percent (No. 5) Snap Share, an 84.1-percent (No. 8) Route Participation mark, 456 (No. 6) Air Yards, and an 18.1-percent (No. 8) Target Share.

Henry has 37 (No. 4) receptions and 387 (No. 5) receiving yards, but his Week 10 TD was only his second of the year. He could be set for a big game with a Week 11 matchup versus the hapless Jets. An unrestricted free agent in 2021, Henry will make for an intriguing dynasty asset moving forward. Sell high moment upcoming?

If there is a postive for Fournette, it’s that he’s been better in the passing game. Unfortunately, the Bucs enjoy a +1.33 (No. 11) positive Game Script average. While Jones rises in the dynasty rankings, Fournette loses 12.37 Lifetime Value points and drops to RB22.

DeeJay Dallas is the biggest faller on the rankings, losing 14.75 Lifetime Value points and falling 19 spots to RB57. As members of the Seattle backfield return from injury, the rookie has seen his Snap Share drop to the 35-percent range. Seeing a career high 18 carries in Week 8, Dallas’ carry count has subsequently dropped from 7 to 2 to 1 on Thursday night against Arizona. Often relegated to third down, he’s recorded two catches in each game from Weeks 9-11. The increasingly crowded backfield is likely to put Dallas’ production on hold for 2020.

Philadelphia’s sixth-round free agent sensation Travis Fulgham saw double digit targets from Weeks 5-7. In Week 10, Fulgham caught only one of his five targets for eight yards. Way to dampen the hype. He’s now seen his targets decrease in two consecutive games. During this time, Jalen Reagor, Dallas Goedert and Alshon Jeffery all returned to the lineup. Fulgham sees the biggest Lifetime Value drop for wide receivers, moving outside the Top 50 at the position.

Former first round pick, N’Keal Harry can’t separate from defenders, evidenced by a 1.53 (No. 61) Target Separation mark, and continues to battle injury upon injury. He has drawn four target in his past three games, catching one for six yards.

Productive as a rookie, Irv Smith was touted as possible 2020 TE breakout candidate. Unfortunately, it hasn’t happened yet. With the Vikings off to a poor start, Smith saw only two targets over the first four games, drawing a blank in Weeks 3-4. His usage increased in Week 5 and he flashed glimpses of what we all hoped for, however a groin injury derailed the momentum. 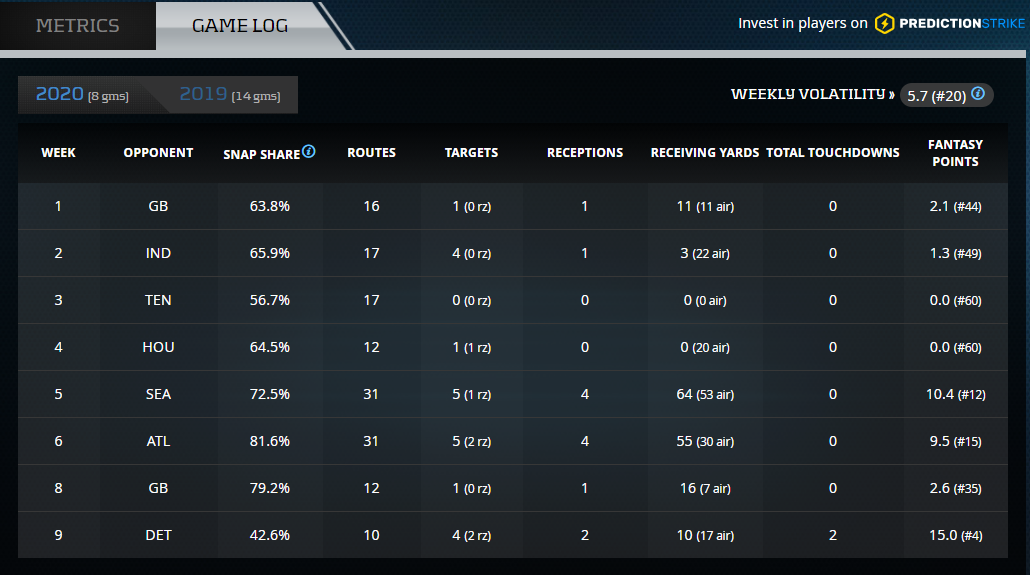 Smith actually ran more routes and earned more targets than teammate Kyle Rudolph in Weeks 5-6. Dropping three slots to TE16 in PlayerProfiler’s dynasty rankings, this may be an opportunity to acquire the sophomore tight-end at a discount.