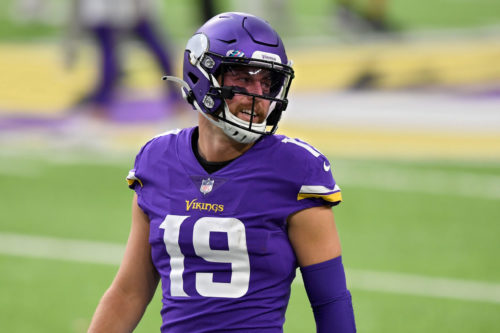 Adam Thielen is the official Air Yards value king! His presence in this section should be no surprise, having appeared here four times before. He is solidly within the top 10 at his position in both Air Yards and Air Yards Share. Coming off a week where he scored over 20 fantasy points, Thielen has a great matchup against a highly exploitable Cowboys secondary. Look for another 20-fantasy point game this week.

On the opposite end of the spectrum is Marquise Brown, who continues to disappoint fantasy players despite encouraging Air Yards numbers. Brown has only three double-digit fantasy point games all season despite his heavy usage in the Ravens passing attack. Coming off one of his worst performances of the year, in which he scored only 3.4 fantasy points, Brown will look to right the ship of a lost season.

the story of marquise brown's week 10 in one stat:

With over 500 Unrealized Air Yards this season, it is a legitimate question if these are actually “unrealistic Air Yards.” Brown’s matchup against a generous Titans secondary is his best matchup of the season. It is now or never for Hollywood.

Full disclosure, you’re going to see all three Cowboys wide receivers on this list. At least one of them has to hit against a Viking secondary that, while paying better as of late, has been a great matchup for opposing passing attacks. CeeDee Lamb led the Cowboys receivers last week with 122 Air Yards. He also led the Cowboys receivers in fantasy points, scoring 15.1 in Week 9 against the Steelers. 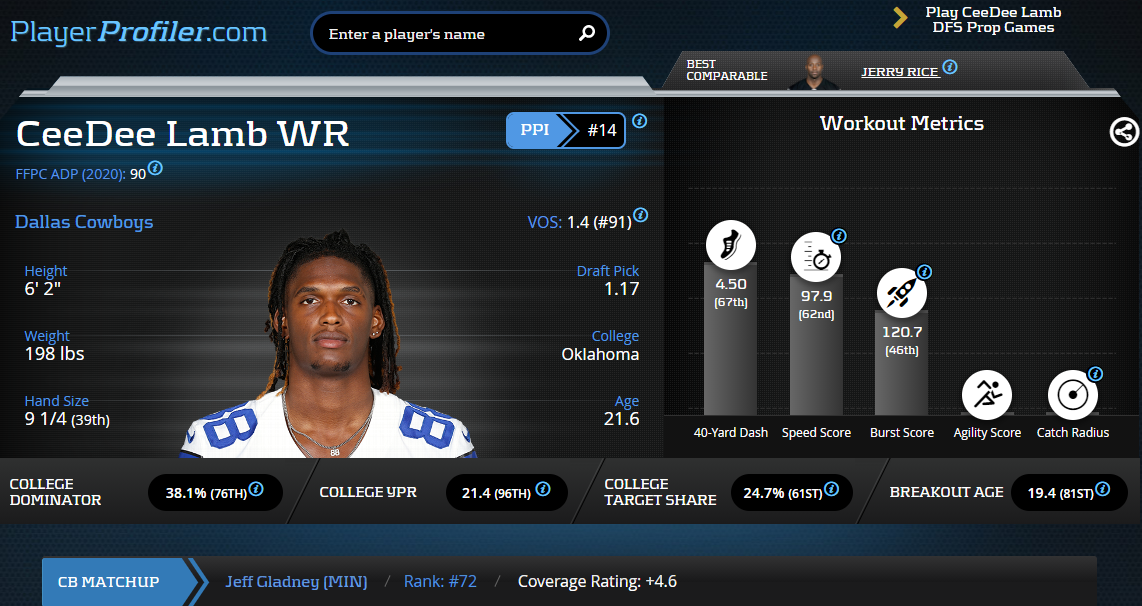 After posting a donut in Week 9, Corey Davis rebounded against a tough Indianapolis defense to finish Week 10 with double-digit fantasy points. His matchup against the Ravens in Week 11 is less than inspiring. However, he is projected to face off against Marcus Peters, who has been the most exploitable starting member of Baltimore’s secondary. Assuming A.J. Brown is hamstrung by stud corner Jimmy Smith, the Titans may force more opportunity to Davis, making him an intriguing contrarian play.

Amari Cooper is the highest-priced Cowboys receiver on the slate, but he is also the receiver who has shown the most chemistry with Andy Dalton. In Dalton’s only complete game of the season, Cooper finished with over 20 fantasy points and led the Cowboys with 10 targets. With the Red Rifle due back from the COVID list, Cooper will look to reignite the chemistry the two displayed earlier this season.

After four consecutive weeks posting double-digit fantasy points, Brandin Cooks failed to crest that figure in Week 10 against the Browns. However, the severe wind conditions Cooks faced in Cleveland last week can explain away much of this lack of production. This included his lowest weekly Air Yard total since Week 4 against the Vikings. 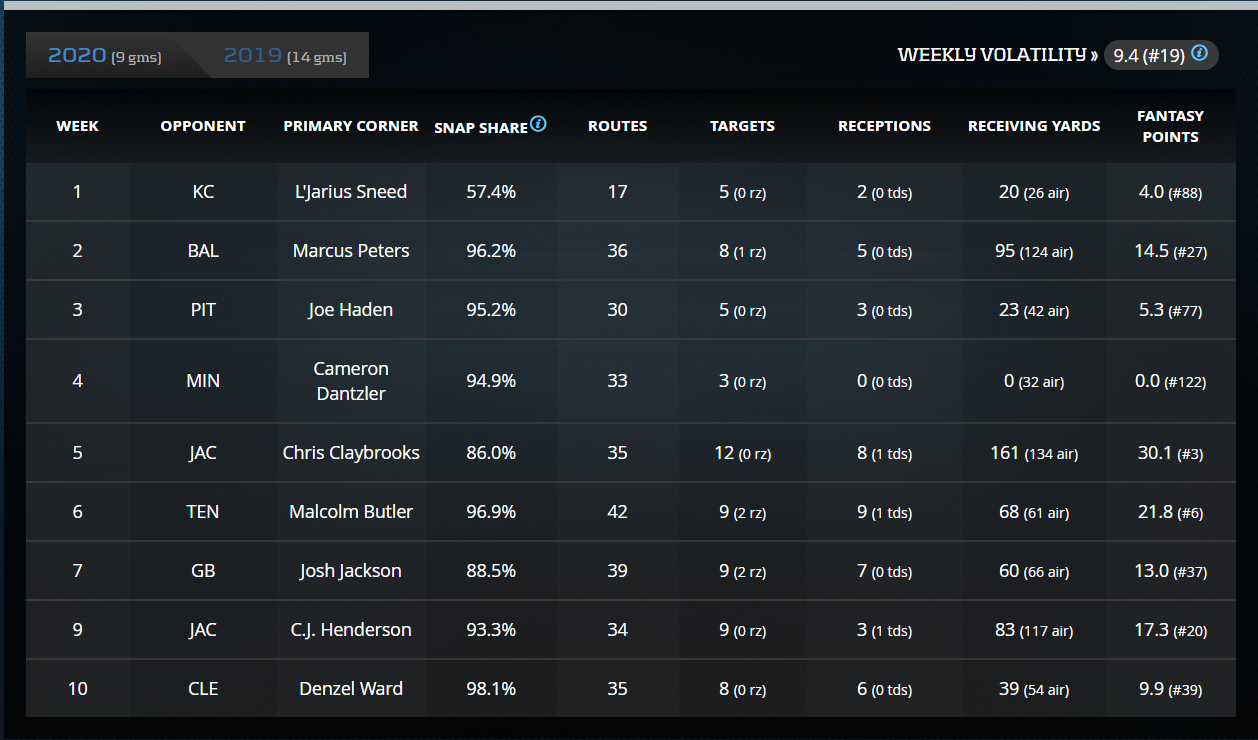 That said, much of Cooks’ viability across all platforms in Week 11 will depend on Stephon Gilmore‘s availability. If New England’s Pro Bowler plays, Cooks will likely face off against their other Pro Bowl-caliber corner in J.C. Jackson, making Cooks a tournament-only Air Yards play.

Tim Patrick finds himself on the Air Yards Value Index yet again. He has clearly been overtaken by Jerry Jeudy in Denver’s receiving hierarchy over the past several weeks. However, he has seen over 60 Air Yards in each of the past two games, with double-digit fantasy point totals in each. Jeudy’s ascension in the passing attack has clearly limited Patrick’s upside. He is solely a “you could do worse” cash game play at wide receiver.

In 2019, the Patriots signed Jakobi Meyers as an undrafted free agent. One year later, he is exclusively the passing attack in New England, leading the entire league in Air Yards Share.

Averaging at least 10 targets over the past three weeks, Meyers has one of the highest floors in all of fantasy football. At $4,900 on DraftKings, you did something wrong if he is not in your cash lineup.

Mike Williams is a strict tournament play this week, like he is every week. However, there is even more volatility with his production because he saw a season-low Snap Share last week and was out-targeted by Jalen Guyton. That said, Williams is the preferred play, seeing 321 Air Yards to Guyton’s 180 across the past three weeks.

Michael Gallup is the lowest-priced Cowboys wide receiver on DraftKings. He also happens to lead the Cowboys in Air Yards.

Assuming Andy Dalton plays competent football in Week 11, Gallup has a chance to smash. However, he remains the most volatile member of the Dallas receiving trio, leading all Cowboys receivers with a 13.0 (No. 28) Average Target Distance mark. At $3,700, Gallup is worth a shot in tournament lineups in the event he pops.

Marquez Valdes-Scantling has averaged over 20 Fantasy Points per Game over the past two weeks. However, he remains a tournament-only play for two main reasons. First, his 17.3 (No. 5) Average Target Distance mark makes his fantasy production highly dependent on catching the deep ball. Second, Allen Lazard appears set to return this week and it is unclear who will be Green Bay’s No. 2 wide receiver. This makes it hard to trust MVS in Week 11. However, he remains someone to speculate on in tournament lineups.

After a breakout performance in Week 9, and a top 35 finish at the position in Week 10, Jerry Jeudy‘s $5,300 price on DraftKings has to be a glitch.

Seeing almost 500 Air Yards over the past three games, Jeudy is the alpha wide receiver some predicted he would be around NFL Draft time. Despite a tough matchup against Miami, he can be deployed across all formats with confidence.

Good luck to everyone in Week 11. May all your Air Yards be realized.