We are about halfway through the 2022 NFL season. Now it’s time to check in on how the teams in the AFC South are doing. This article will provide you with all you need to know about how the first eight weeks went for the AFC South. Also, I will take a look at how my predictions for the season are stacking up so far as well as provide a few more predictions. Since Week 4 the division has shaped itself up much better, and it’s clear what kind of teams these AFC South teams are. The Jags surprise was fun while it lasted, Matty Ice has melted, Derrick Henry is Derrick Henry, and Davis Mills is unfortunately not taking that step forward. Without further ado, let’s take a look at these teams- this is the Post Week 8 AFC South Report!

The Titans haven’t lost since Week 2. Derrick Henry hasn’t had a game under 100 yards since Week 2. See the connection? While the record says otherwise, this team isn’t necessarily that good. These five wins were against the Raiders, Colts twice, Commanders, and Texans. None of those teams are above .500.

Essentially, the Tennessee Titans are one of the worst good teams in the NFL and will struggle when they play better opponents.

I also was fairly persistent on Nick Westbrook-Ikhine, but I’m finally off the train. I figured he would be consistently available (which he has), but he just hasn’t been used. Going into Week 5, I predicted he would be a consistent option because of injuries. In Week 5 he had 72 yards(!), so I was pretty excited. Well, he hasn’t had a catch since. Sorry Nick, but you’re just not that guy.

It’s about to be a tough time to be a Titans fan. The next four games are against the Chiefs, Broncos, Packers, and Bengals. Even more unfortunate is that they play the Bengals when Ja’Marr Chase is expected to return. Currently, the Titans are 12.5 point underdogs to the Chiefs. This shows that even Vegas doesn’t view this Titans team as a true 5-2 team. They very well could lose all of the next four games, but it shouldn’t hurt them. They are already three games ahead and are clearly better than the rest of the division right now.

Prediction: Malik Willis will be the official starter by Week 13.

Matt Ryan was demoted to 3rd string behind Sam Ehlinger and Nick Foles. That should tell you all you need to know. Additionally, both coordinators have been fired, and Jonathan Taylor has struggled to stay healthy. There’s still time to turn it around, but the future looks bleak. 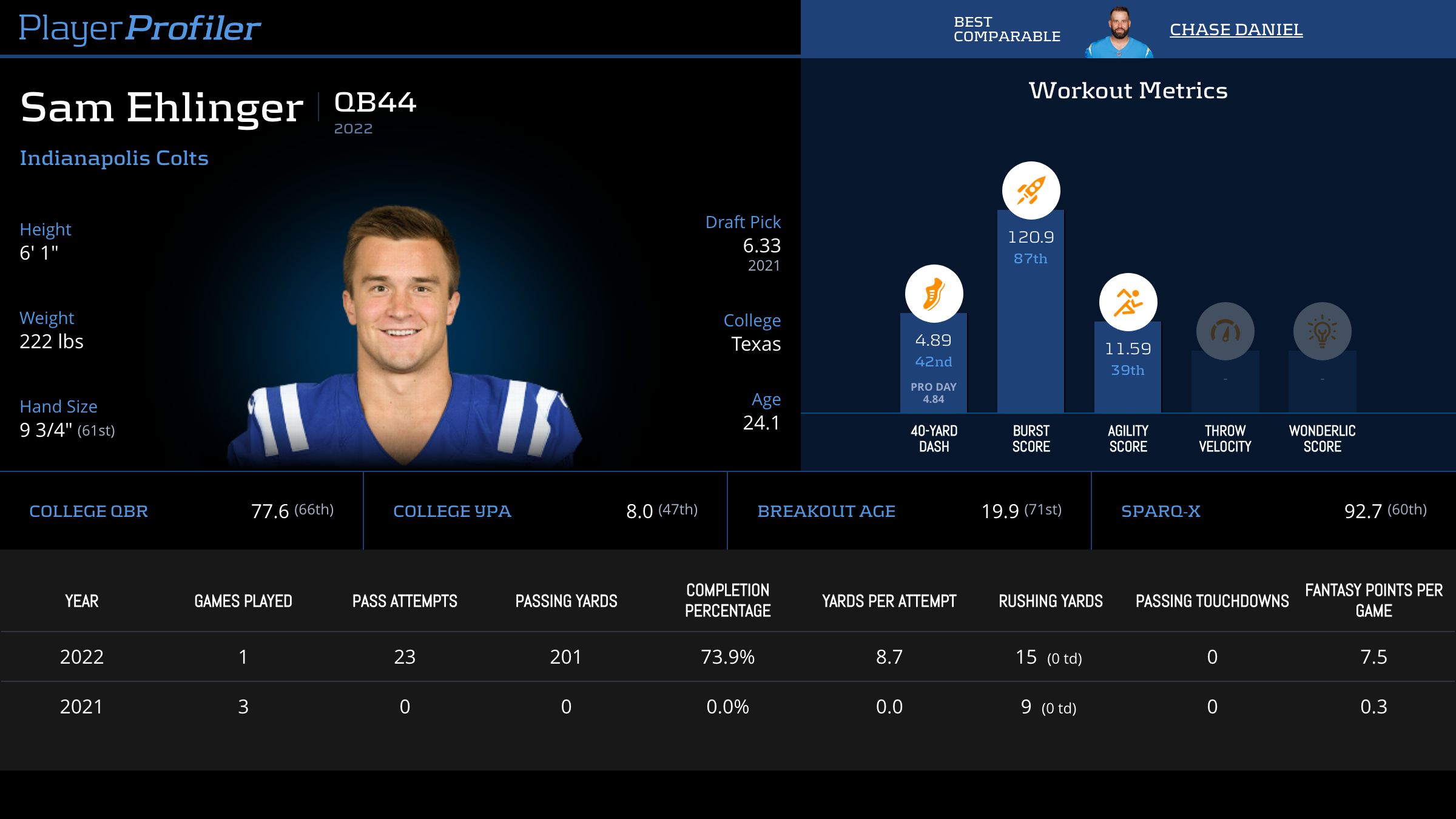 The offense is the main problem. Matt Ryan was top five in passing yards before being benched but unfortunately threw nine interceptions and lost three out of 11 fumbles. And as mentioned earlier, Taylor can’t stay healthy, so they rank No. 29 in rush yards and No. 30 in rush TDs. In addition, we have them ranked as the No. 30 offensive line here at Player Profiler. The defense on the other hand has been solid as they rank top 10 in points for and in yards allowed. They even held the Chiefs to only 17 points.

However, I’m gonna toot my horn on Alec Pierce. I’ve been on this dude like white on rice since the day he was drafted by the Colts. It’s been a solid spot for him, and I see his role continuing to grow. The same is true with Jelani Woods, however, he hasn’t had quite the same level of breakthrough. It is true that Woods has caught three times as many touchdowns as Pierce, but touchdowns can be unpredictable.

The Colts might legitimately not win another game this season because they have an absolutely horrible stretch. They play games against the Patriots, Raiders, Eagles, Steelers, Cowboys, Vikings, Chargers, Giants, and Texans. It is the NFL, so they will likely get another win or two under their belt, but for the most part, this team has nothing going for it. I expect them to find some identity by the next time we speak in Week 13.

Well, after starting the year off hot, the Jaguars have tumbled. They haven’t won a game since Week 4 and even lost to the Texans. It’s been a tough stretch, but all of the losses were only by one score even their loss to the Eagles. As shown by their ranks, this team is better than their record states as they rank No. 10 in points allowed and No. 9 in total yards.

James Robinson was surprisingly traded to the Jets, so the Jaguars had to rely on Etienne in Week 8. He responded by going for 156 rush yards on 24 carries. Even with Robinson there, Etienne had clearly taken the backfield away from him. His arrival has happened, so hopefully, you were able to trade for him. Speaking of trades, the Jaguars also traded for Calvin Ridley. It doesn’t mean anything this year, but it does show that they are certainly eyeing 2023.

They’re starting to become way more accurate than they did four weeks ago. Coming into the year, I felt that the Jaguars would be a surprisingly good team, but they just wouldn’t win. That is because they have a tough schedule. Now sitting at 2-6, and only losing in one-score contests, we are seeing that unfold. This team will be dangerous in 2023 if they somehow fall into a top draft pick.

On another note, the prediction I left after Week 4 was that Travis Etienne would start to perform at his ADP. Well, look at that! Not only has he been crushing it- his backfield competition was traded away!

Also, I was pretty sold on Evan Engram being a great value tight end heading into the year. He sucked in weeks 1-4, but in weeks 5-8, he has been pretty solid. Engram is definitely starting to be a valuable streaming tight end.

This schedule isn’t letting up. Their next four weeks are against the Raiders, Chiefs, Bye Week, and then the Ravens. Good for their draft pick chances, but bad for their season. They should hopefully come out of this stretch 1-2.

Prediction: Evan Engram has a two-touchdown game against the Chiefs.

They won a game! And it was against the Jaguars! There’s nothing quite like beating a divisional opponent especially when you’re basically the worst team in the NFL. Somehow, they are ahead of the Lions right now in the draft order, but that is sure to change. This team is bad in any category except the fact that they rank No. 2 on defense in most passing TDs allowed. That’s only because teams don’t have to score many TDs against them- especially passing ones.

As mentioned in the Post Week 4 Report- the Texans’ rookie class is great. Dameon Pierce has handled workhorse volume like a champ, averaging a respectable 15.4 FPPG. Jalen Pitre is No. 4 in odds for Defensive Rookie of the Year and even had a coveted tackle for loss against Derrick Henry. Also, Derek Stingley still hasn’t allowed a touchdown. These are total hits across the board in this draft class.

Like I said after Week 4, I thought they’d be a little better than they have been. Unfortunately, Davis Mills hasn’t taken the next step forward. It is still possible though that they get No. 3 in the division like I predicted as they got the head-to-head win over the Jaguars. We shall see how things shake up in the Post Week 12 Report!

In terms of player predictions, Nico Collins just hasn’t happened yet. He started trending in the right direction and then got hurt. He’s still worth holding onto as an IR stash, but will more than likely not break out until next season when the Texans get Bryce Young.

It doesn’t look great, but that’s probably a good thing if this team ever wants to move forward. Unfortunately, Davis Mills is not the answer. The next four games are the Eagles, Giants, Commanders, and Dolphins. They might beat the Commanders, but otherwise, we’re still gonna be looking at a bottom-of-the-barrel NFL team in Week 13.