Week 4 was a celebration week for waiver winder grinders. There were multiple strong performances from players picked up off the wire, including a three-touchdown game from Cordarrelle Patterson. While he has been the early waiver wire star through four games, he will certainly not be the last out-of-nowhere contributor this season.

This week we have a few repeat names, along with some new ones. We have multiple RB injuries to monitor and two must add TEs. Bye weeks are quickly approaching and now is the time to strengthen our rosters.

We have discussed Sam Darnold in this column for multiple weeks, but will continue to bang the drum for him. Darnold passed for 301 yards and two TDs and also found the end zone two times on the ground. He is well on his way to the best season in his career. If you are unhappy with your QB situation, then stream him.

Is Sam Darnold the next Ryan Tannehill? 🚨 pic.twitter.com/awYDww6H75

Jimmy Garoppolo suffered a calf injury, and Trey Lance took over in the 49er’s loss to Seattle. Lance looks set to make his first NFL start against the high-flying Arizona Cardinals. Lance has big-time fantasy potential and immediately will be in the streamer discussion.

Daniel Jones passed for a season-high 402 yards this past weekend in New York’s first win of the season against New Orleans. Jones finally has a healthy Saquon Barkley, Kenny Golladay, and Evan Engram, and Kadarius Toney looks like he could give the offense an added spark. Jones has a great matchup this week in an NFC East showdown against Dallas.

David Montgomery is week to week with a knee injury. Damien Williams (provided he is good to go with a thigh bruise) should step right into a high-volume role in the Bears offense. Williams has had fantasy success and is a two-way threat that should play on passing downs and see the goal-line work. We do not know how long Montgomery will be out. Williams should be a very hot addition this week and should be very useful in the short term, and potentially longer. 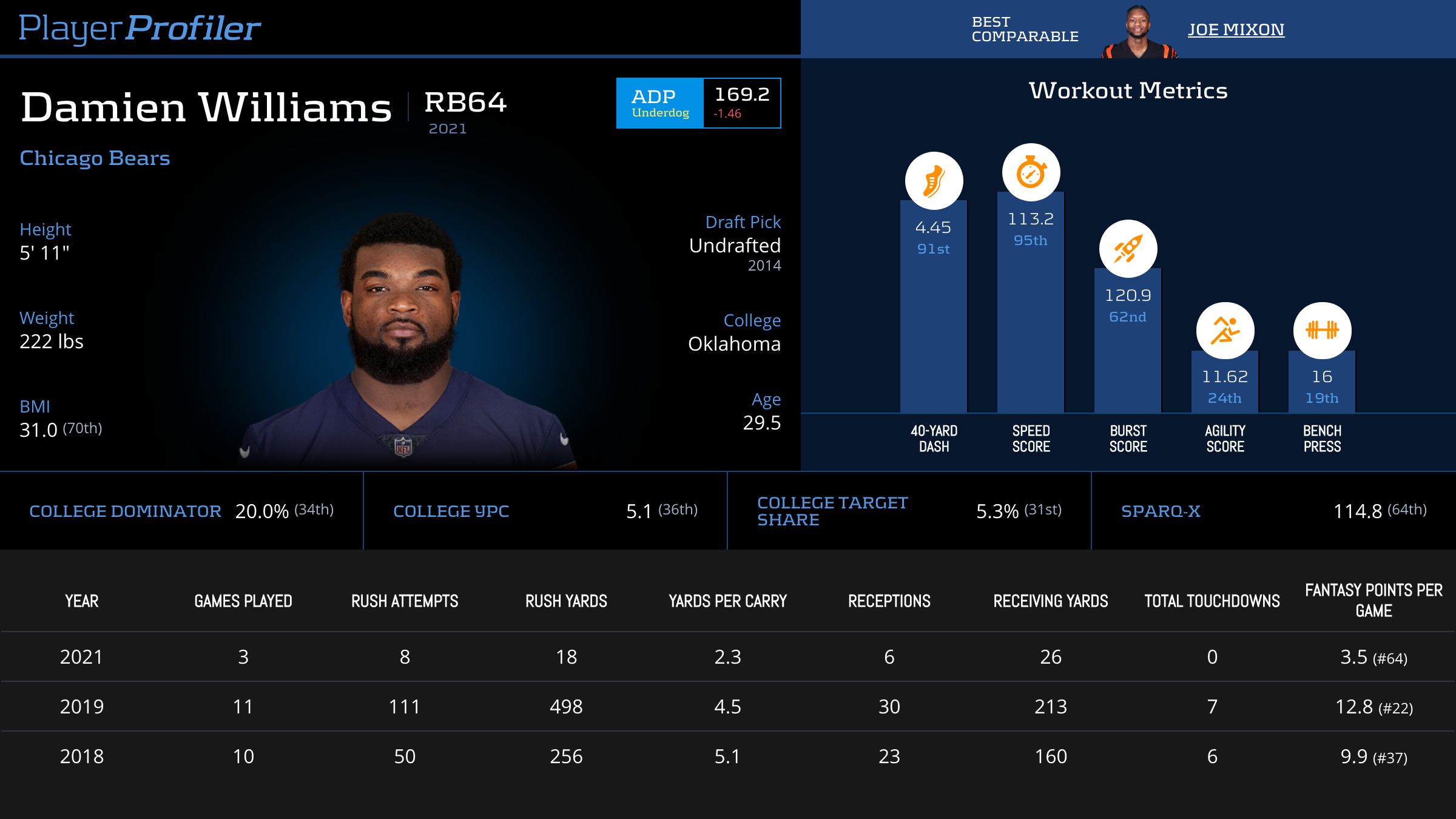 I discussed Kenny Gainwell in previous Waiver Wire Watchlist articles as a player to consider adding. This past weekend, Gainwell saw increased usage as Philadelphia tried to keep up with Kansas City. He caught six passes for 58 yards and found the end zone as a rusher.

Joe Mixon went down with an ankle injury. The reports are saying “low grade strain,” but we have seen Mixon miss multiple games in the past, and ankle injuries can linger. Samaje Perine should be added. Rookie Chris Evans would also see increased usage, but Perine would have a shot at RB2 production this week, and for as many games as Mixon is out.

If Joe Mixon misses time, expect Samaje Perine to take over most of early-down work and half of the passing-down duties.

Expect Chris Evans to handle other half of passing work and push to expand. Stash play.#JAXvsCIN

Ty’Son Williams was a surprise inactive this past Sunday against Denver. Latavius Murray seems to be the back to roster in Baltimore. The veteran had eighteen carries in a significant win in Denver.

Alex Collins saw 12 touches to 14 for Chris Carson. Collins also found the end zone. I am not sure what to make of the situation here, but Collins is worth a waiver wire add. At the very least, he is the handcuff in Seattle, and potentially he is even more.

Jamison Crowder was back and did Crowder-like things finishing with seven catches and finding the end zone. Crowder was potentially cut in many leagues, but should be added. He displayed chemistry with Zach Wilson, and could be a sneaky source of PPR value as a security blanket-plus for the young rookie QB.

I still have faith that Robert Woods will bounce back and produce this season. But if history has taught us anything, players can fade quickly in this league. Van Jefferson has 12 targets over the last two weeks, and caught a TD to go along with 90 yards receiving this past weekend. He has juice and could see his role grow within the offense.

Hard to recommend any Dolphin right now, but DeVante Parker should see an uptick in targets with Will Fuller suffering a hand injury.

A.J. Green looked like dust last season in Cincinnati but suddenly looks rejuvenated in the desert with the high-flying Cardinals. Green found the end zone on five catches for 67 yards, and looks to have a weekly role in a top-notch offense. We want as much exposure to Arizona as we can get. He should be rostered.

Every year we see undrafted TEs finish as TE1s. This year Dalton Schultz and Dawson Knox were right under our noses and attached to top notch QBs/offenses. Age 25/24 and both look like sustainable pieces moving forward.

Dawson Knox appears to be this year’s Robert Tonyan. The third-year player now has caught four TD passes, including two this past weekend in the Bills 40-0 rout of Houston. Knox should be viewed as a TE1 moving forward. He is one of the Bills’ best red zone threats and is coming off a season-high eight targets.

Through four games, Dalton Schultz is TE3 overall on the season. It is time to ignore any priors you have and embrace the fact that he is a significant piece of the Cowboys offense. Schultz has had three six-catch games this season. This past weekend, he saw a season-high eight targets and found the end zone for the third time in two games. Start Schultz every week.

Zach Ertz now has 15 targets in the last two games. The Eagles lack any alpha WR1, and Ertz should continue to have a role despite the presence of Dallas Goedert.