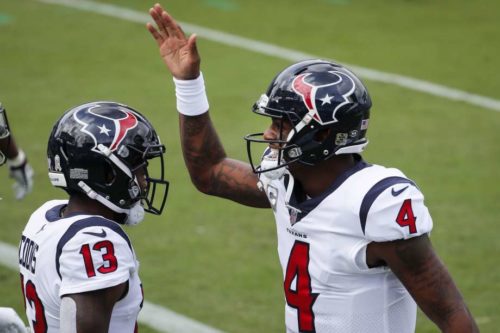 Greetings everyone, welcome back to our weekly installment of Quarterback-Wide Receiver Stacks to target in daily fantasy football. As always, the aim here is to identify under the radar combinations of quarterbacks and wide receivers on the same NFL team to play in our daily fantasy lineups in order to get leverage on the field by effectively doubling our points when that pair of players connects for touchdowns and big plays. To help us with that, we dig deep into the advanced stats and metrics here on PlayerProfiler.

Week 12 was a tumultuous slate with a mass of late-breaking news having to do with both injuries and COVID precautions. With many cheap backups being thrust into starter roles after pricing was released, the ease with which to pay up at QB increased as the week went on. That paid off for those who rostered Patrick Mahomes, particularly if stacked with Tyreek Hill.

Our recommendations started with the other side of that Chiefs game with Tom Brady and Chris Godwin. We expected Game Script would force Brady to throw. At only 5% ownership, he finished with 41 attempts, 345 yards and three TDs, good for 26.7 DraftKings points. Godwin led the team in receptions but missed out on the end zone and the 100-yard bonus. His 17.7 points represented a good but not game-breaking day.

The attractive expensive stack we looked at was not the Chiefs, but the Bills. Josh Allen and Stefon Diggs both had down games, leading all day in a game that did not shoot out as much as we expected and hoped. Both were popular with ownership in the mid-teens. Allen had 17.48 and Diggs 10.9 points.

The budget stack went down in flames this week. Against what was billed as a hapless Falcons defense, Derek Carr, at 10% ownership, lost three fumbles, threw a pick, and scored no touchdowns. He was pulled for Nathan Peterman in garbage time. In a game where the QB struggles like that, the WRs unsurprisingly did not put up strong fantasy numbers either. Nelson Agholor finished with 10.4 points, Carr had 4.6.

This appears to be another challenging week at quarterback without any immediately obvious plays. At the bottom of the top tier is Aaron Rodgers matched up against the struggling Eagles defense. He will likely be heavily rostered with Davante Adams even at his $9K price. Being heavy favorites against the Giants, and with the run game re-emerging, Russell Wilson is tough to trust from a volume perspective. Kyler Murray is coming off a tough game where he didn’t run much. Taysom Hill and Kirk Cousins will both likely be popular with middle-of-the-road prices, yet both are shaky options given volume concerns.

After the murderer’s row of defenses to start the year, Deshaun Watson has been simply phenomenal. He should be a popular option this week without getting too chalky as players fear that imposing Colts defensive matchup. Despite being middle-of-the-pack with 363 (No. 16 among qualified quarterbacks) Passing Attempts, Watson ranks No. 4 in Passing Yards, No. 5 in Completed Air Yards, and No. 5 in Passing TDs. He’s doing it with excellent efficiency, exhibited by his 8.8 (No. 1) Yards per Attempt and 0.58 (No. 4) Fantasy Points per Dropback.

The big thing this week will be the absence of Will Fuller, who was suspended for a PED violation. Without question it will hurt, but it does open up more targets for Brandin Cooks, who is experiencing a career year with the Texans.

Instead of throwing darts at the backups with Keke Coutee, Isaiah Coulter, or the tight ends, go with Cooks. At only $5600, he will be among the cheapest WR1s available on the slate. This game will be played in a dome with one of the only 50-plus point totals; no need to get fancy.

Next, we turn to the highest game total of the slate with the Tennessee Titans. Ryan Tannehill has continued his impressive stretch of play this season. He’s averaging a robust 8.3 (No. 4) Adjusted Yards per Attempt and 0.57 (No. 5) Fantasy Points per Dropback. This week, they face a Cleveland Browns team at home in what should be a competitive game with plenty of scoring throughout.

A.J. Brown faces a difficult matchup, going against PlayerProfiler’s No. 3-ranked cornerback Denzel Ward. That matchup should reduce the roster percentage in tournaments for Brown, giving us leverage on the field. He has been unstoppable this year, with 318 (No. 10) Yards after the Catch and eight (No. 7) Touchdowns. Regardless of CB matchup, he’s always a threat to take one or two to the house.

Finally, Chicago brings us our budget stack of the week. Mitchell Trubisky is back, and after what we were treated to with Nick Foles, this is a good thing for the Bears and fantasy gamers. Trubisky is more aggressive through the air than Foles was. The Air Yards per Attempt make this obvious: Trubisky averages 9.2 (No. 3) to a 7.8 (No. 18) mark for Foles. For a Bears team that struggles to keep drives alive, splash plays will be necessary to create fantasy value.

Mitchell Trubisky may not always complete passes, but when he does…

11.7% of his completions this season have been touchdowns.

On top of the vertical passing game, Trubisky has always relied on his legs throughout his career. Picking up 30-40 yards on the ground essentially adds another passing TD to the stat line. In 2018 when he was most heavily used in the rushing game, he averaged five attempts for 30 yards per game. At only $5.4K, he draws a matchup against a Lions team with a struggling defense that just fired their coach after getting torched by Deshaun Watson on Thanksgiving.

The unquestioned alpha in the offense, Allen Robinson is the most sensible receiver to stack with Trubisky. They didn’t miss a beat last week, with Robinson earning 13 targets en route to a two touchdown performance. On the season, Robinson ranks No. 3 in total targets and averages 9.8 per game. Put it together and we have a stack featuring a running QB with his target magnet WR1 at discount prices in a dream matchup with low ownership due to brand. That presents an enticing combination of upside and leverage on the field.