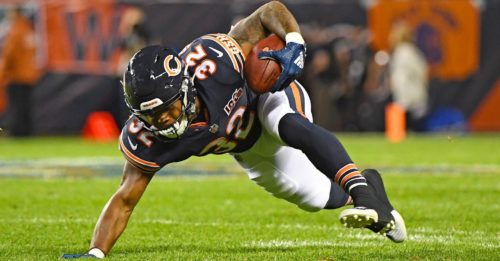 Maximizing your fantasy points per salary dollar is the key to cashing in DFS. If you want to afford the best cash plays on the slate, dumpster diving for underpriced value plays is the way to go. DraftKings held off on releasing prices until Wednesday, so value plays such as Alexander Mattison and Chase Claypool don’t have the cheap price tags we are accustomed to. This makes identifying Flex values on the main slate even more challenging on the surface. Here are the best DFS Flex values for Week 6 based on PlayerProfiler’s advanced stats, metrics, and analytics.

Without Alvin Kamara and Ezekiel Elliott, there is no obvious RB that projects for all three downs of work in a soft matchup. Derrick Henry can’t ever be counted on for a passing down role. Mike Davis faces the vaunted Chicago Bears front seven. We have Alexander Mattison, but he may split time with Mike Boone after he emerged down the stretch last season. This leaves David Montgomery as a prime free square RB in a great spot against the Carolina Panthers.

Montgomery’s passing down role has been incredible since Tarik Cohen’s season-ending injury. In two games post-Cohen, he’s run 66 routes and seen 14 targets from Nick Foles. He was up against two of the top four-ranked Defensive Rushing DVOA defenses in Indianapolis and Tampa Bay, which is why he only managed 5.8 yards per touch in that span, but this week he draws the No. 29-ranked Defensive Rushing DVOA team. He is primed for the most efficient game of his season and is playing on all three downs.

The best part about Montgomery is his cheap salary on both sites. His new role makes him a smash play on DK, but he’s ridiculously cheap on FD as well, landing among Myles Gaskin and Antonio Gibson. Montgomery projects as one of the best values on a per-dollar basis this week.

Sometimes, buying volume doesn’t work out in the end. That was the case for A.J. Green this season, who seems to be officially washed after turning 34 targets (No. 22 among qualified wide receiver) into 14 (No. 59) catches for 119 (No. 89) receiving yards. His Snap Share plummeted to 41.4-percent as he saw just one target in Week 5, paving the way for Tee Higgins (77.6-percent Snap Share) to take over. As a part-time player, Higgins has seen 30 targets (No. 30) in four games and has 16 (No. 48) receptions for 214 (No. 45) receiving yards. He also commands a 30.3-percent (No. 24) Air Yards Share for the Bengals, meaning he’s running the downfield routes that lead to spike weeks. With Green continuing to decline right before our eyes, Higgins is the new perimeter receiver to get excited about.

The Bengals offense is no joke under Joe Burrow. While much of it is fueled by negative Game Script, they average 2.31 (No. 11) plays per minute and 45.8 (No. 2) Team Pass Plays per Game. That elevates the entire passing offense in fantasy football, especially in DK’s full PPR scoring system. With Higgins averaging 7.5 targets per game (No. 21) as a part-time player, he’ll push for double-digits as a starter in this offense. That’s the ideal player we want as a value play in DFS.

Higgins isn’t in the best matchup this week, though. The Colts have a rejuvenated defense, ranking No. 1 in Defensive DVOA. Their offense also plays at a snail’s pace, averaging 2.06 (No. 30) plays per minute. While that will limit the number of plays for Higgins, they still project for negative Game Script as eight-point underdogs this week.

The Eagles finally had a receiver step up in the wake of their plethora of injuries. Travis Fulgham, a former sixth-rounder with the Lions, exploded for a 10-catch, 152-yard, one-score performance. Fulgham may be popular after his Week 5 explosion, but there is reason to believe he can repeat his success. One of the more impressive aspects was that he dropped that stat line on Joe Haden and a Steelers defense that ranks No. 7 in Defensive DVOA. His matchup doesn’t get easier against the Baltimore’s top-three defense, but he will be matched up with Marcus Peters. Allowing 24 (No. 65) receptions for 299 (No. 66) yards thus far, Peters has been the most beatable member of this defense.

Carson Wentz’s desperation for a receiver was also on full display. He fed Fulgham 13 targets on his 34 routes in Week 5, helping contribute to his current 19.8-percent (No. 5) Hog Rate. Fulgham was incredibly efficient on that heavy volume and now ranks No. 1 in Yards Per Route Run and No. 3 in both Target Premium and Production Premium. Given Philly’s lack of talent at skill positions, he’ll be busy for the foreseeable future.

Olamide Zaccheaus was last week’s stone-min priced freebie and he whiffed. He did see four targets and played 98.4-percent of snaps, but only managed one reception for 13 yards. While some see that as a failure, sharps understand that he unlocked the rest of your lineup, allowing you to afford the premium RBs and TEs that Week 5 had to offer. This week we have a similar player in Darnell Mooney.

Darnell Mooney is the Bears' No. 2 pass-game option and should've had a 50-yard TD in Week 5 pic.twitter.com/JeEeDNzqEh

Mooney has officially supplanted Anthony Miller as the WR2 on the Bears in two-receiver sets. Miller still maintains his coveted slot role, but Mooney is starting opposite Allen Robinson on the perimeter. With Robinson seeing a monster 28.9-percent (No. 5) Target Share, there isn’t much left behind for these secondary options. The good news is Mooney can make a lot happen with his 4.38 (96th-percentile) speed. He’s averaged 6.3 targets per game since Week 3 and will be on the field nearly every down against the Panthers. Mooney hasn’t had a signature blow-up game this season, but he has a shot against this weak Carolina defense. For those looking to afford the premium QBs and RBs this week, he’s the key to making it happen.

With both Travis Kelce and George Kittle back off the main slate, elite TE options are hard to come by. Mark Andrews has busted in two of his five games and Zach Ertz looks like absolute dust. It makes sense to pay down at the position, and Eric Ebron is in the sweet spot this week.

Diontae Johnson has already been ruled out for this week, meaning Ebron is in line for additional work. Over his last three games, he’s averaged six targets and has one touchdown. Those are also premium targets, evidenced by his 9.8 (No. 6) Average Target Distance mark. Cleveland is also weak against his position, representing the sixth-most favorable matchup for opposing TEs per our strength of schedule metrics. Ebron has shown the ability to score multiple touchdowns throughout his career. The talent, role, and matchup are ideal this week.