The goal of the Air Yards DFS Value Index is to determine the best “bang for your buck” in daily fantasy. This is accomplished by utilizing a player’s Air Yards and Air Yards Share to create a weighted Air Yards metric. We then compare this metric with each player’s DFS salary to create a Value Score. The best value Air Yards play on the week is always scored with a value of 100. All other players are compared against that player with decreasing value. This list is not a mere recitation of where each player is ranked — a simple machine could do that. This list contextualizes each players Value Score so as to present the top ten Air Yard values in DFS for the week focusing on players priced at or below $5,500 on Draft Kings.

Again, we will highlight two wide receivers on the Air Yards Value Index priced above $5,500 and then focus on the top ten Air Yards Value Plays priced at $5,500 or below on Draft Kings.

A familiar face tops the list as this week’s Air Yards ultimate value. We’ve discussed Adam Thielen twice before in this series. He remains the passing game in Minnesota despite Justin Jefferson‘s emergence. Thielen has cleared 100 Air Yards each week this season, finishing with over 25 fantasy points in each of the past two weeks.

Facing the Falcons in Week 6, Thielen has a great matchup to exploit and has the opportunity to finish as the WR1 on the week.

Similar to Adam Thielen, Terry McLaurin has frightened away the Logan Thomas hype, and has remained the focal point of his team’s passing game. McLaurin is second only to Thielen among qualified wide receivers in Air Yards Share. He enters Week 6 squaring off against a Giants secondary that, setting James Bradberry aside, is exceedingly poor. Priced just high enough to miss the Value Play list, McLaurin presents a great value, Bradberry and Kyle Allen‘s below average play be damned.

With D.J. Chark trending towards being out, Chris Conley will look to take over as the field-stretching target for the Jaguars in Week 6. The last time Chark missed time, Conley saw over 160 Air Yards. However, he failed to realize any of the opportunity, posting only 6.4 (No. 66) fantasy points in Week 3 against the Dolphins. 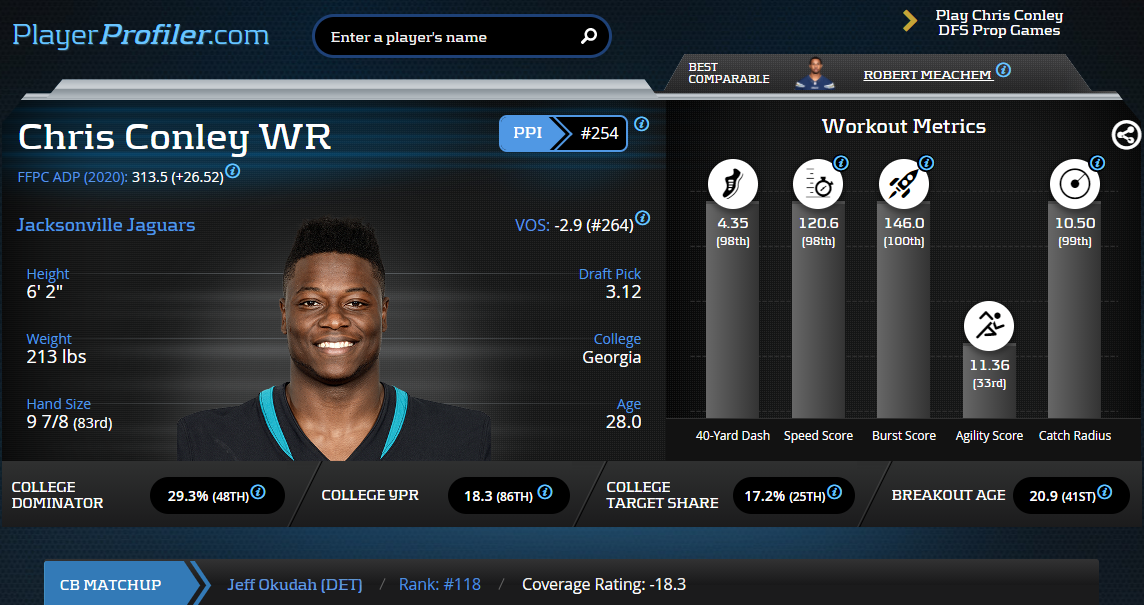 In a potential shootout with the Lions in Week 6, Conley has a chance to be on the lucky side of variance and finally realize some Air Yards.

Jerry Jeudy is no stranger to the Value Play list. However, now priced at the cutoff, his days on this list are likely numbered. With Noah Fant a 50-50 shot to play, and Drew Lock looking like he will return, Jeudy is set to be the primary target in Week 6 against the Patriots. He should be able to capitalize on this opportunity despite Stephon Gilmore looking ready to return off the COVID list.

Brandin Cooks finished with zero fantasy points in Week 4 against the Vikings. However, he rebounded in Week 5, leading the Texans with 134 Air Yards against the Jaguars and finishing as the WR3 on the week with 30.1 fantasy points.

With Bill O’Brien no longer roaming the Texans sidelines, Cooks may have a bigger role in the offense moving forward. Most likely, he remains a boom-bust option best suited for tournament play.

Similar to Brandin Cooks, Preston Williams exploded in Week 5, leading the Dolphins with 121 Air Yards against the 49ers and finishing with 20.6 (No. 13) fantasy points. Williams is now almost about a year removed from an ACL tear, and his Week 5 performance may be a harbinger of things to come. Seeing penalty of opportunity from Ryan Fitzpatrick, Williams looks to continue to build on last week’s top-24 finish against a Jets secondary that is easily exploitable.

We discussed Damiere Byrd last week before COVID cancelled the Patriots-Broncos game. Unfortunately, Byrd is no longer priced at the stone cold minimum, but he presents a value nonetheless.

The last time the Patriots played, Byrd lead the team with 150 Air Yards. Things may change with Cam Newton now activated from the COVID list, though he remains an intriguing dart throw.

Scott Miller‘s value is contingent on either Chris Godwin or Mike Evans missing this week’s game against the Packers. Both got in limited practice and Godwin appears good to go while Evans is a likely game-time decision. If Evans can’t play, look for Miller to soak up his opportunities, particularly on deep passes downfield.

Miller averages 17.2 (No. 6) yards of Average Target Distance, making him a high-variance option in DFS.

Tee Higgins‘ presence on this list began after Week 3 and has no end in sight. Still priced below $5,000, Higgins has officially supplanted A.J. Green as the Cincinnati’s Air Yards hog, leading the team in each of the past three weeks. If he is not Joe Burrow‘s primary target in the passing game, he is pretty darn close.

We previously hinted at Jeff Smith‘s Air Yards, and this week he finally finds himself on the list. The second-year wide receiver has averaged 10 targets across his two active games with the Jets. Also, he has a 100.0-percent Snap Share in each of these games. 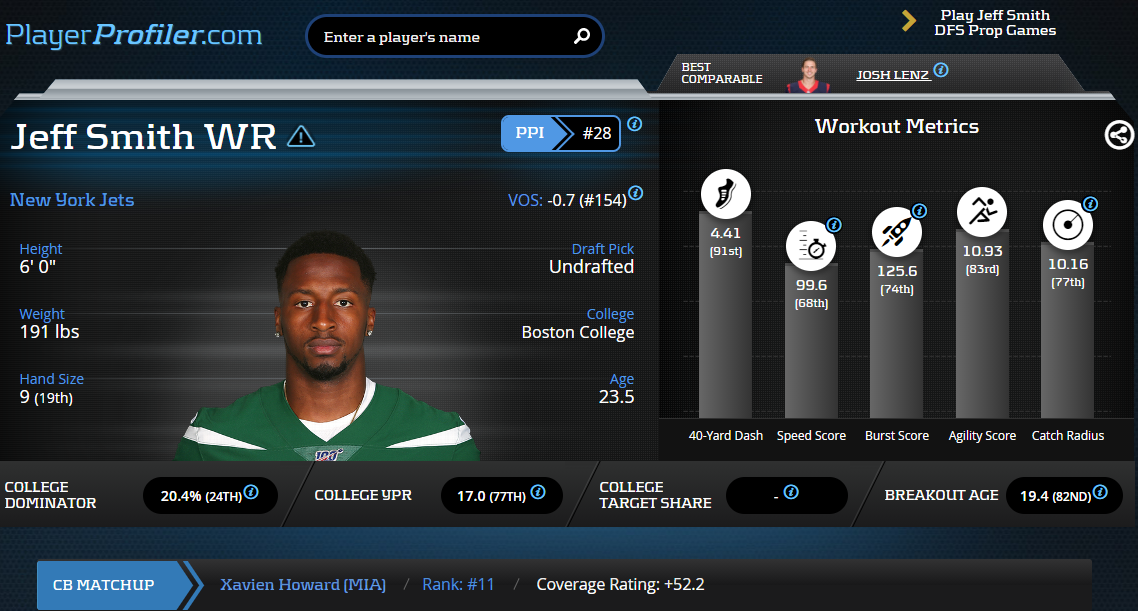 Priced at the stone cold minimum and seeing the opportunity to clear double-digits points, Smith is a great cash game play.

Marquez Valdes-Scantling makes his first appearance on the Value List right as Davante Adams is set to return. Even with Adams active, Scantling will see plenty of highly volatile Deep Targets in the Packers passing game. He ranks No. 4 among qualified receivers with a 17.5 Average Target Distance mark. He also came close to matching Adams’ Air Yards the last time the two receivers played a full game together in Week 1 against the Vikings. Even with Adams as the clear target hog, Scantling should see more than enough high-yardage targets to pay off.

Darius Slayton is the only bonafide WR1 on his team that makes the Value List. This will likely change after this week with Slayton now near the price threshold. He is top five among qualified receivers in Air Yards Share. Plug him into your DFS lineups as a value while you still can.

Good luck to all in week 6. May all your Air Yards be realized.