PlayerProfiler’s Player Popularity Index (PPI) tracks individual player profile page views over the past 30 days and ranks them accordingly. Each week, this article will highlight the five highest-ranked players and use our advanced stats and metrics to provide fantasy football insight on each. Following Sunday’s action and prior to Monday Night Football, the PPI pinpointed the following top-five trending players for Week 8: 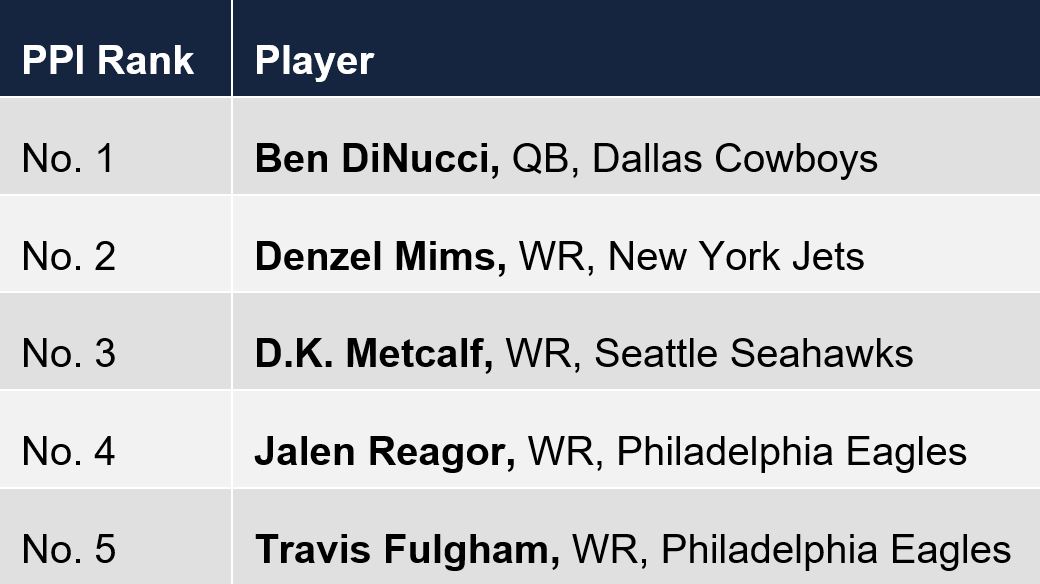 Do Not Start DiNucci

The Cowboys trotting out Ben DiNucci for a divisional showdown with the Eagles sums up the Cowboys 2020 season in a nutshell. A rookie seventh-rounder from James Madison, Dallas’ third-string quarterback was thrust into the starting role following a nightmare scenario. Dak Prescott suffered a season-ending injury in Week 5. Two weeks later, highly-paid backup Andy Dalton got concussed following a dirty hit by Washington’s Jon Bostic. That led to DiNucci getting the nod on Sunday night, and an ugly performance ensued. He completed 21-of-40 attempts for 180 yards, no touchdowns and no interceptions while losing two fumbles. Philadelphia sacked DiNucci four times for a loss of 48 yards. His prime-time faceplant earned him the top PPI ranking for Week 8. Woof.

So, who is DiNucci?

After backing up Nathan Peterman as a redshirt freshman at Pitt, he took over the starting job his sophomore season following an injury to incumbent Max Browne. After Pitt replaced DiNucci with Kenny Pickett in its finale, DiNucci transferred to FCS James Madison in the Colonial Athletic Association. That he couldn’t hack it in the ACC tells us all we need to know about DiNucci. He’s a developmental QB who’s not worth a roster spot in all but the deepest of Superflex dynasty leagues, and otherwise remains fantasy irrelevant.

Key Metrics: DiNucci averaged 9.1 yards per attempt in college, which ranks in the 81st-percentile among qualified quarterbacks. His 21.2 QBR ranked No. 24 among Week 8 QBs.

The good: Denzel Mims led the Jets in receiving with 42 yards and flashed his big play ability. He reeled in a 27-yard catch over Charvarius Ward while falling backward down the sideline, showing off impressive body control. Through two games, he’s averaging 14 yards per reception, the best mark on the Jets among players with at least 10 targets. The bad: Mims drew only three targets in a game where Sam Darnold threw it 30 times. His two catches came in the first quarter and he saw only one target the rest of the game. Hello, Adam Gase. The ugly: Braxton Berrios earned a team-high 11 targets on his way to 8-34-0, and Jeff Smith also did little with his eight targets (3-29-0).

Mims’ ceiling will remain capped until Gase disappears, but that makes him even more of a screaming buy-low in dynasty leagues based on his prospect profile. The second-round pick from Baylor possesses elite workout metrics and college production to match. Need more convincing? His Best Comparable Player on PlayerProfiler is Chris Godwin. Mims offers managers a speculative add in deeper redraft formats, but doesn’t possess enough weekly upside for anything but a desperation Flex play. He busted as a chalky main slate play this week and draws the Patriots in Sunday Night Football in Week 9.

Key Metrics: Mims boasts a 42.3-percent (85th-percentile) College Dominator Rating, the fourth-best mark among the 2020 receiving class. His Speed Score, Burst Score and Catch Radius all rank in the 95th-percentile or above.

One week after his mesmerizing, mind-melting chase down of Budda Baker, D.K. Metcalf rewarded his fantasy managers in a big way. Making a strong case for the NFL’s most talented athlete, Metcalf roasted the 49ers by catching 12 passes for 161 yards and two TDs. Through Sunday’s games, his 40.1 fantasy points ranked second to Dalvin Cook‘s 48.6 among all positions. Metcalf saw a season-high 15 targets, while no other Seahawks receiver earned more than five. He caught a 10-yard pass from Russell Wilson on a dig route and turned that into a 46-yard score. On that play, he showed off his ability to turn on the afterburners and generate yards after the catch.

Metcalf’s rise to No. 3 in PlayerProfiler’s dynasty wide receiver rankings makes him a challenging acquisition. In redraft, he’s primed to appear on league-winning squads in all formats and should be pursued aggressively. For example, in one-quarterback leagues, try to entice the Metcalf manager with a package deal that upgrades their squad at QB and includes a receiver a tier lower than Metcalf.

Key Metrics: Metcalf’s seven receiving TDs tie him for the league lead. He boasts the best yards per reception mark (21.6) through Week 7, and also ranks No. 5 in Production Premium, a testament to his efficiency.

The NFL got its first glimpse of Philadelphia’s formidable 1-2 punch of the future with Jalen Reagor and Travis Fulgham, who shared the field for the first time. Reagor returned from a thumb injury and recorded his first NFL touchdown. In an otherwise forgettable fantasy outing, he finished second on the Eagles with six targets, behind fellow rookie Fulgham and his seven. Reagor posted a 3-16-1 line and also rushed once for six yards. But the dynasty darling’s return to action resonated with the fantasy community, evidenced by his No. 4 PPI ranking.

Reagor, the 2020 first-round pick from TCU, boasts elite college production at a Power 5 school and impressive workout metrics to boot. He’s the team’s future alpha dog and his ascension to the role is imminent. That’s not to take away from Fulgham, who’s impressed in his own right.

metrics like target premium and dominator rating illustrate fulgham’s production in the context of the eagles offense:
stalled drives, low target quality on one hand and negligible target competition on the other hand.

The sixth-rounder from Old Dominion earned two top-10 fantasy finishes at the wide receiver position in his first four games. Through Week 7, he averaged 19.2 Fantasy Points per Game, which was the No. 8 ranking. Prior to Reagor’s return, Fulgham saw 10-plus targets in three straight games. However, he won’t see that much volume alongside Reagor.

With Dallas Goedert back and Miles Sanders trending toward a return, the Eagles looks primed for a second-half offensive surge. Philadelphia’s next three games come against the NFC East cellar-dweller Giants, a beatable Browns squad and the Seahawks, who allow the most fantasy points above the mean (+16.49) to opposing receivers. That makes Reagor a screaming waiver wire add in redraft leagues, where he’s rostered on less than 30-percent of squads. And if an impatient dynasty manager wants to sell him based on Fulgham’s success, buy, buy, buy. On the other hand, Fulgham offers a buy-high opportunity in dynasty. While Reagor’s presence caps his weekly upside, he’s proven himself a capable NFL receiver.