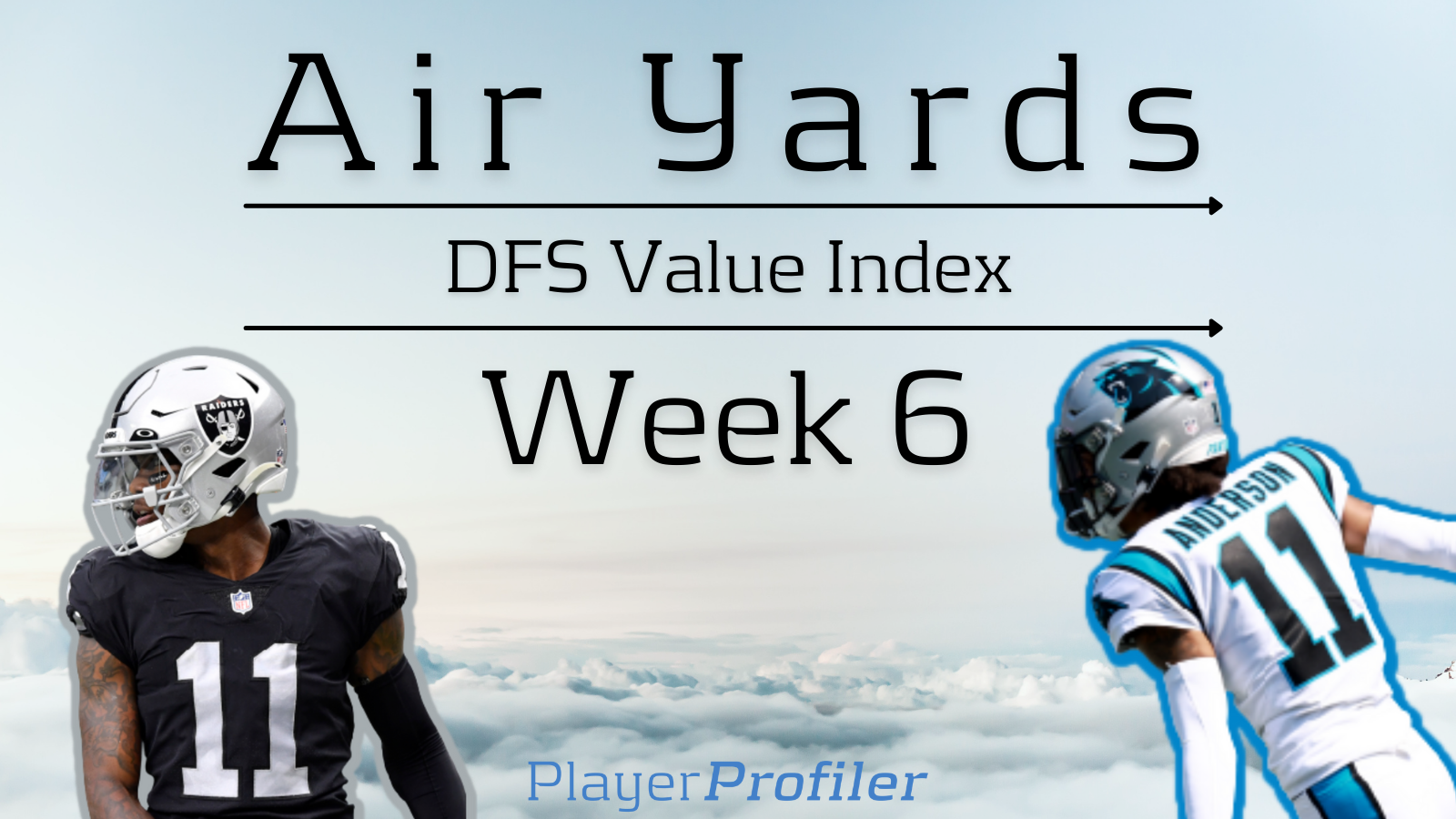 We will highlight three wide receivers on the Air Yards Value Index priced above $5,500 and then focus on the top ten Air Yards Value Plays priced at $5,500 or below on DraftKings.

Brandin Cooks continues to occupy the top spot in the paying up section. His usage saw a hit last week with the emergence of practice squad call-up Chris Moore. However, despite Moore’s 21.9 fantasy-point performance, the 28 year old receiver only saw 35 Air Yards compared to Cooks who saw 60 Air Yards. Despite his season low output in Air Yards last week, and his first instance of not leading the Texans in Air Yards on the week, Cooks remains a focal point of the offense. Squaring off against a Colts secondary that just got toasted by the similarly statured Marquise Brown, look for Cooks to bounce back big. He remains a preferred play in all formats.

Similar to Brandin Cooks, Courtland Sutton is no stranger to this list and the paying up section. Coming off a WR10 finish in week five where he saw 130 Air Yards, Sutton remains the preferred target in the Broncos passing game. Squaring off against a Raiders team that is in a transition period of sorts he should see enough volume to potentially exploit a surprisingly stout secondary. Sutton makes for an intriguing contrarian tournament play based on the fact that the Raiders have allowed only one opposing wide receiver to crest double digit points the past three weeks.

I’ve included one more player in the paying up section of the article cause it is just really damn fun to talk about Ja’Marr Chase. He surprisingly leads the league in Air Yards Share despite sharing the field with Tee Higgins and Tyler Boyd.

While Higgins missed time due to injury in Weeks 2 and 3, he did not substantially carve into Chase’s opportunities in Week 5. The rookie out-gained the second year vet in Air Yards 159 to 43. While this may not remain the case moving forward as the the receiver share a similar Target Share, Chase offers the most upside with a 15.1 (No. 10) Average Target Distance compared to Higgin’s 8.5 (No. 76) Average Target Distance. He should be in lineups in all formats this week.

After seeing six targets and securing three receptions for 46 yards and two touchdowns in Week 4, Kalif Raymond failed to register a catch in Week 5. He saw only two targets and but saw 66 Air Yards, which was more than in Week 4. With Quintez Cephus out indefinitely due to a broken collarbone, Raymond will likely serve as the primary field stretcher for the Lions. With 4.39 (95th-percentile) 40-Yard Dash speed, he makes for a great tournament dart throw.

Nelson Agholor is one of two Patriots receivers to make the Top 10 value list. Surprisingly, the Patriots are within the NFL’s top ten teams in passing plays per game however, this has failed to translate to fantasy production for Agholor. He leads the Patriots receivers with 12 yards of Average Target Distance (No. 32) and essentially operatives as their best downfield threat.

With the Patriot’s looking to keep pace with the Cowboys offense this week, Agholor is worth rostering as a boom or bust tournament option.

Bryan Edwards has flashed when given opportunities this season. In fact, in games in which he has seen at least five targets, Edwards has scored double-digits fantasy points. Unfortunately, Edwards has only seen five targets in two games this year and is averaging only 4.4 targets per game. Regardless, he is somewhat surprisingly used as a downfield threat with a 15.4 (No. 8) Average Target Distance. He is in the top 10 among qualified receivers with 9 Deep Ball targets. It seems unlikely that Edwards will see five targets or more against a stout Broncos secondary this week. For this reason, he is a desperation dart throw in tournaments and a “I’m out of cash option” in cash.

Van Jefferson took a back seat to Cooper Kupp and Robert Woods last week, as most predicted he would prior to the start of the season, seeing only four targets compared to 14 for Woods and 10 for Kupp. However, he still saw over 70 Air Yards for the second consecutive week. Jefferson will likely remain behind Woods and Kupp in opportunities for the remainder of the year, but his participation in the passing game can create boom week outcomes as evidenced by his WR8 finish in Week 4. He remains a solid tournament play.

The Browns scored 42 points against the Chargers last week. Baker Mayfield threw for over 300 yards. However, Odell Beckham finished with 4.0 fantasy points on 20 Air Yards. Gross.

After seeing over 140 Air Yards in each game the two weeks prior, its safe to assume this was just a horrendous outlier game for Beckham, from an Air Yards perspective. However, he hasn’t been able to capitalize on his Air Yards thus far, averaging only 7.6 (No. 73) Fantasy Points Per Game. For this reason, he’s a high-risk, high-reward DFS play that is best reserved for tournaments.

Jakobi Meyers remains the Patriots go-to receiver seeing 31 (No. 7) targets thus far. He has also left a lot of “meat on the bone” with respect to his passing game opportunity with 228 Unrealized Air Yards. With the Patriots expecting to try to keep pace with the Dallas Cowboys offense, Meyers should see penalty of volume this week and is a recommended play in all formats.

We are now entering Week 6 and Darnell Mooney continues lead the Bears receivers in Air Yards, targets, and fantasy points. When this madness will end is anyone’s guess. While Allen Robinson may catch up in targets, he has a lot of ground to make up in Air Yards where Mooney leads the two 298 to 240. Mooney makes sense in tournaments given the current state of the Bears offense which offers an abysmal floor.

Michael Pittman has scored double-digit fantasy points in every game since Week 2, including his season-best 20.9-fantasy point performance last week. 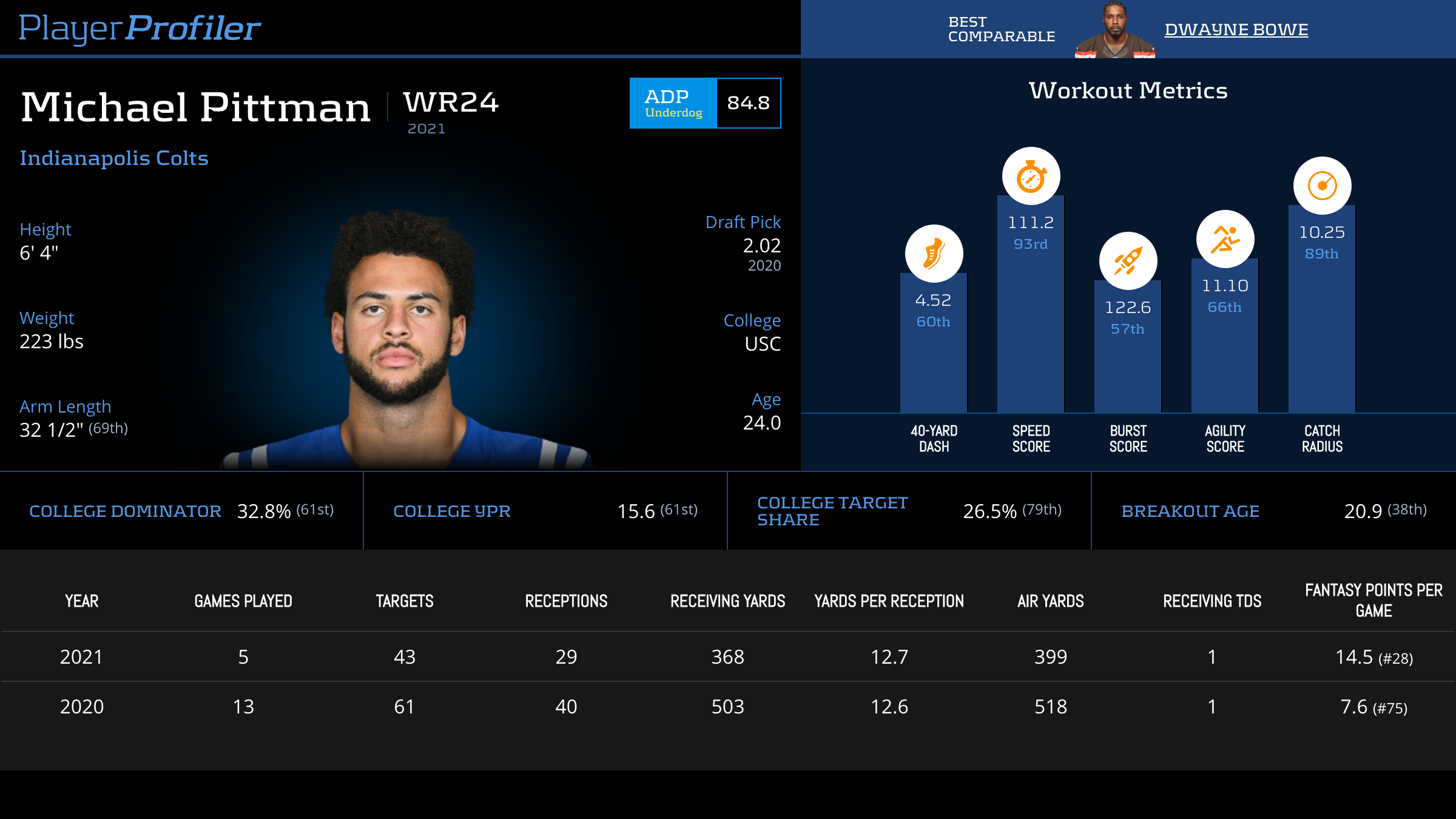 Pittman is the receiver to roster on the Colts, who face off against a underwhelming Texans secondary this week. The second-year breakout continues in Week 6. Pittman is a recommended play in all formats.

Robby Anderson continued to see an uptick in usage last week with his second consecutive game seeing over 100 Air Yards. It was the second consecutive game in which Anderson saw more Air Yards than D.J. Moore. The Panthers are trying manufacture the “squeaky wheel” game for Anderson, who had a sideline outburst last week. Look for the Panthers to continue to try to get Anderson the football, and look for him to boom this week against an exploitable Vikings secondary. He is a recommended tournament play.

Henry Ruggs is quietly progressing in his second season. He averages 11.7 (No. 42) Fantasy Points Per Game and has been efficient on his opportunities, posting a +8.5 (No. 46) Production Premium. He remains the Raiders’ field-stretcher, evidenced by his 18.3 (No. 3) Average Target Distance. The Raiders offense has a tough matchup this coming week for both on and off the field reasons against the Broncos. Ruggs is THE preferred contrarian play this week in the hopes that he can get behind the Broncos secondary like he did in Week 2, where he finished as the WR9 on the week.

Good luck to everyone in Week 6. May all your Air Yards be realized.