There were 262 names called during the weekend of the 2022 NFL Draft, but those aren’t the only players who make the transition to the pros. Every year there are undrafted players who make an impact and become marquee names after the NFL overlooked them. 2022 surely won’t be an exception, so it’s worth tracking where these guys land. Every NFC undrafted free agent among fantasy football-relevant positions is listed below.

Master Teague did not participate in the NFL Combine, but he made up for it by dominating his pro day. At 5-11 and 220-pounds, Teague ran a 4.47 (72nd-percentile among qualified running backs) 40-yard dash and logged a 105.4 (81st-percentile) Speed Score. 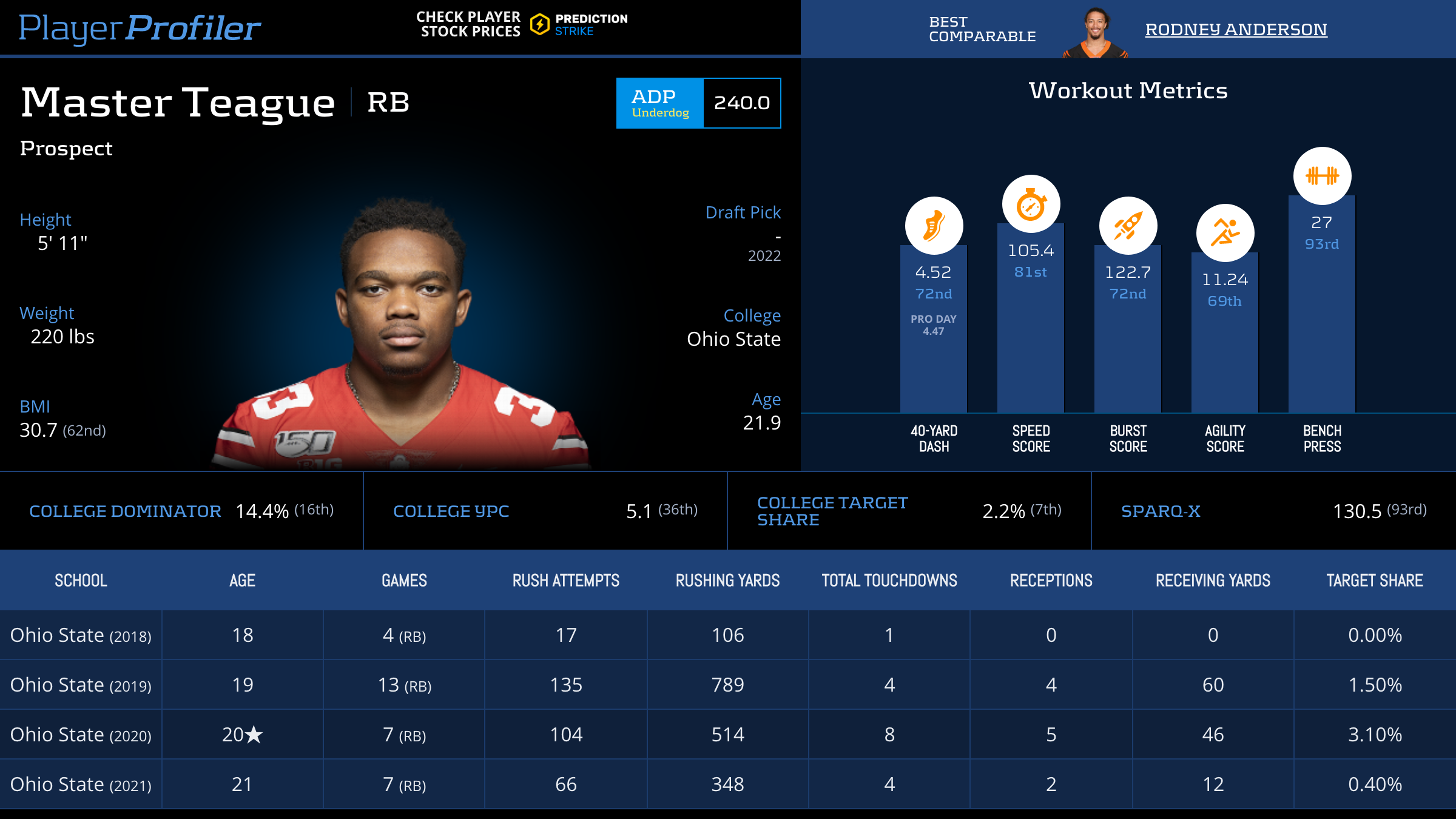 Teague has always been productive when given the chance at Ohio State, evidenced by his career 5.1 yards per carry. But injuries, as well as an influx of talent, prevented him from ever becoming a true workhorse in college. Still, he’s got more than the requisite size and athleticism at the running back position, is solid in pass protection, and played with Bears starting quarterback Justin Fields in Columbus. It wouldn’t surprise if Teague beats out Darrynton Evans and sixth-round pick Trestan Ebner for the third-string running back duties in Chicago.

Tyler Goodson is a 5-9, 197-pound back with 4.42 (95th-percentile) speed. He was a versatile weapon out of Iowa. He scooted for 1,151 yards in has junior season while adding 31 of his 70 career receptions. His 30.3-percent (68th-percentile) College Dominator Rating and 12.0-percent (86th-percentile) College Target Share numbers matched with his premier athleticism should’ve warranted him getting drafted. That the Green Bay Packers were able to add him as an undrafted free agent is a home run. Last year’s seventh-round pick Kylin Hill tore his ACL in Week 7 of last season. Fourth-string back Patrick Taylor had his moments a year ago, but Goodson looks like a superior athlete and receiver out of the backfield. He has a legitimate path to becoming Green Bay’s new third-string back behind Aaron Jones and A.J. Dillon. He’d have a legitimate path to fantasy value too if he emerges victorious.

E.J. Perry has 4.65 speed (87th-percentile) speed and ran for 1,132 yards during his two seasons as a starter in the Ivy League. Carson Strong does not possess anywhere near that type of mobility, but is a stout pocket passer with a cannon for an arm. 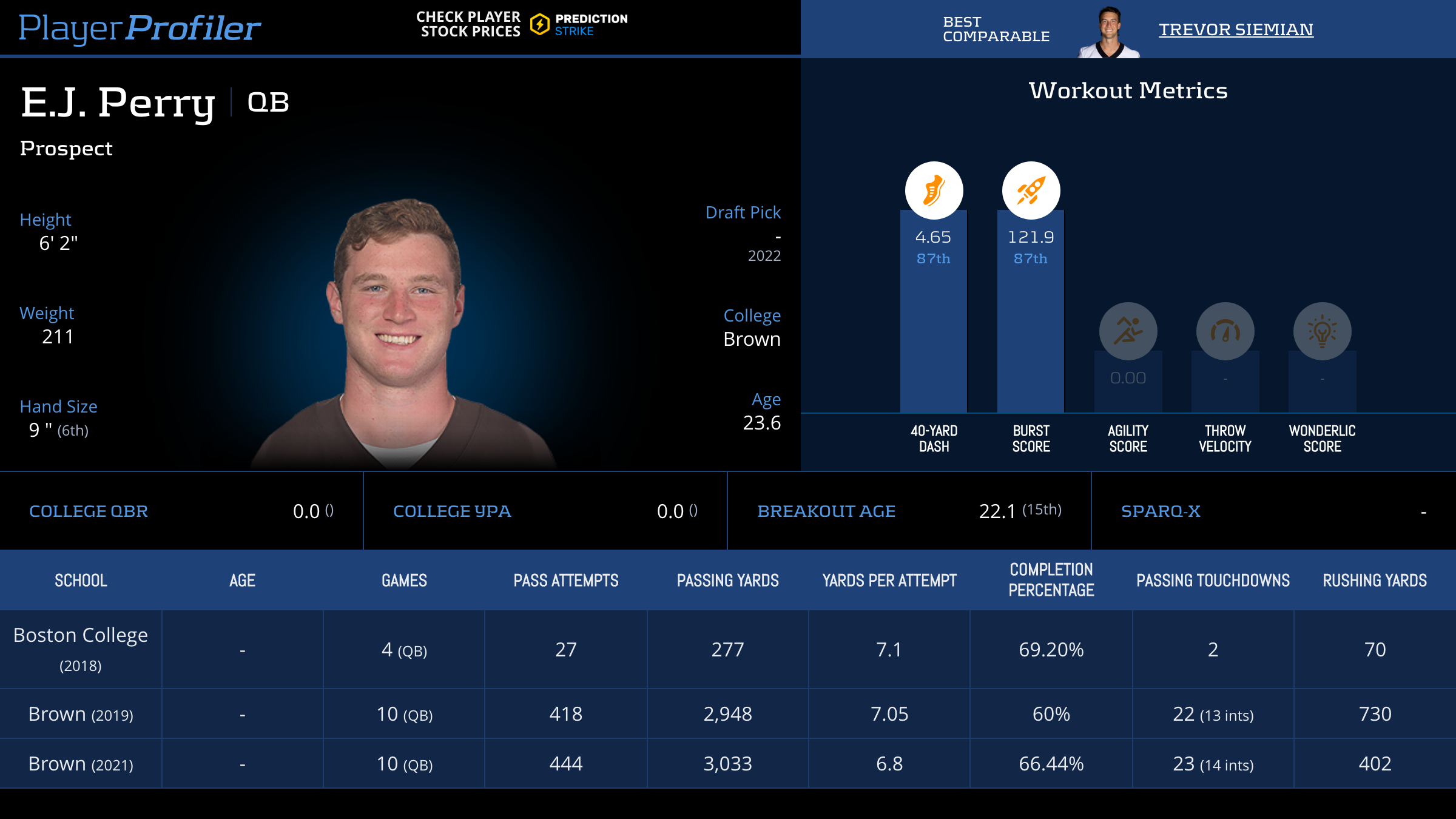 Teams often target backup quarterbacks who play a similar style as their starter so they don’t have to drastically change how their offense functions in the event of an absence. Let’s just say Perry is closer to Jalen Hurts in play style than Hurts himself. The Eagles kept two quarterbacks (Hurts and Gardner Minshew) last year; perhaps Perry or Strong can crack the team this year.

Seattle’s quarterback room consists of Drew Lock, Geno Smith, and Jacob Eason. Neither Levi Lewis nor Kaleb Eleby will emerge out of training camp as the successor to Russell Wilson, but why couldn’t they make the 53? Levi Lewis has mobility (1,088 career rushing yards and 14 career rushing touchdowns) and experience operating a run-first offense. Lewis fits how Seattle wants to run (key word: run) their offense and likely has the edge between him and Eleby of making the 53. It will be an uphill climb for either of them.