When sorting by Fantasy Points Per Game, we find several eyebrow-raising players from 2020. For the most part, we stumble upon players that fantasy managers relied on each week. Can these players replicate their success in 2021? Or was their 2020 season a fluke and not repeatable? We glance at their advanced metrics to decide whether these points per game studs in 2020 can repeat their success in 2021.

At the University of Washington, Myles Gaskin provided highly productive seasons and averaged over 1,300 rushing yards over four years. As a smaller running back, Gaskin finally landed his opportunity with the Dolphins last season. He came into the year behind Jordan Howard (yuck) and Matt Breida. However, Gaskin flashed his PPR ability in Week 1 and beyond with 16.4 (No. 10among qualified running backs) Fantasy Points Per Game through 10 games.

According to the World Famous Draft Kit, Gaskin ranks as RB21, with the projections having him take on over 270 touches. He sits right above Josh Jacobs, but should earn more opportunities in the receiving game, which serves well for PPR leagues. Fantasy managers going with a zero-RB type build should target him at his ADP.

Gaskin, a point-per-game stud, should replicate his 2020 season.

Amongst the running backs that ranked highly in Fantasy Points Per Game, David Johnson stood out. Last season, he averaged 15.0 (No. 13) FPPG. The Texans fed him the rock with a 73.7-percent (No. 8) Opportunity Share and 160.4 (No. 26) Weighted Opportunities. He relied on volume to reach that PPG threshold, although he ranked No. 21 with 691 rushing yards and No. 16 with 314 receiving yards.

We know Johnson produces in the rushing and receiving game, but how much longer can he sustain this production near 30 years of age? A few surprising metrics include 5.6 (No. 8) Yards Per Touch, a 6.1-percent (No. 8) Breakaway Run Rate, and an +8.5 (No. 18) Production Premium. However, the Texans project to be a weaker offense, especially if Tyrod Taylor starts at quarterback.

Per the World Famous Draft Kit, Johnson comes in at RB41 between A.J. Dillon and Melvin Gordon. That ranking indicates that we should fade him in redraft leagues even though he ranked No. 13 in FPPG. Even if he relies on volume, it probably doesn’t even matter given the offensive downgrade (losing Will Fuller) along with the additions of Phillip Lindsay and Mark Ingram.

It seems unlikely that Johnson will repeat as a FPPG stud in 2021, but his ADP keeps Johnson interesting.

Context matters in fantasy football, and that ends up as the case with Brandon Aiyuk in his rookie season. In late December 2020, I dug into the most productive 2020 rookie wide receivers, and that included Aiyuk. In five weeks (Week 7, 8, 10, 13, and 14), he ranked No. 5 amongst wide receivers with a 30-percent Target Share and 40-percent Air Yards Share.

On a points per game basis, Aiyuk averaged 15.4 (No. 16) Fantasy Points Per Game. We know his opportunities and productivity came with Deebo Samuel and George Kittle banged up. Without Kittle, Aiyuk smashed in 2020. 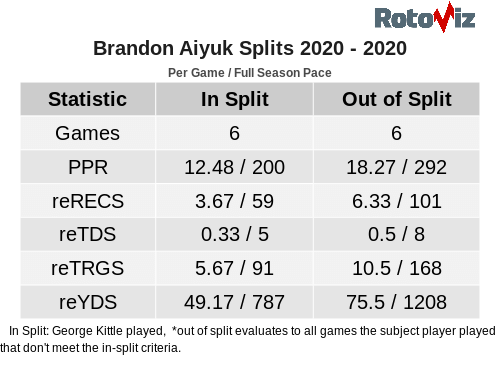 Even with and without Kittle, Aiyuk performed slightly better without Samuel. His finishing as the top 49ers wide receiver in 2021 is within the range of outcomes. 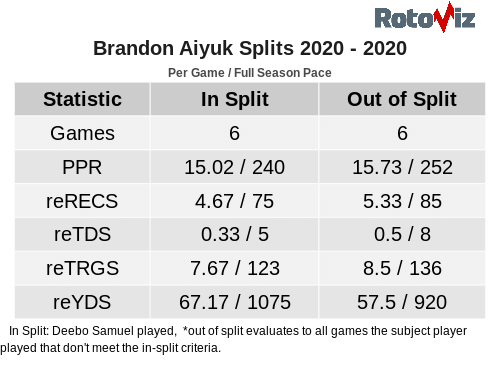 Draft him as a WR2 that gives fantasy managers WR1 type upside.

After a fully healthy 2020 season, Will Fuller missed games due to violating the performance-enhancing drug policy. Fuller averaged 17.2 (No. 7) Fantasy Points Per Game with five top-15 weeks where he averaged over 24 PPG. Paired with Deshaun Watson, he finished with an uber-efficient season, evidenced by 11.7 (No. 1) Yards Per Target and a +44.8 (No. 1) Production Premium.

However, we know that will change in 2021 with Fuller now on the Dolphins. Efficient quarterbacks often pair with efficient pass-catchers, and Tua Tagovailoa struggled with efficiency as a rookie, averaging 5.8 (No. 29) Adjusted Yards Per Attempt and a -19.6 (No. 33) Production Premium.

Fuller ranks as WR41 in the World Famous Draft Kit near Curtis Samuel and Brandin Cooks. Sure he provides upside, but his role with the Dolphins will shift, and we expect his efficiency to regress a bit.

Like David Johnson, Fuller’s ADP bakes in the risks and concerns, but I may land him as an upside WR3.

Will Brady continue to pass a ton heading into his 22nd season? Sure, and the Underdog ADP of 79.9 makes Brown the 33rd WR off the board. If the passing opportunities remain high, he can exceed his ADP and provide WR2 type numbers more often than not.

Personal bias aside, we should want talented pass-catchers paired with Brady.