The Colts’ Lost Season is in FULL Swing 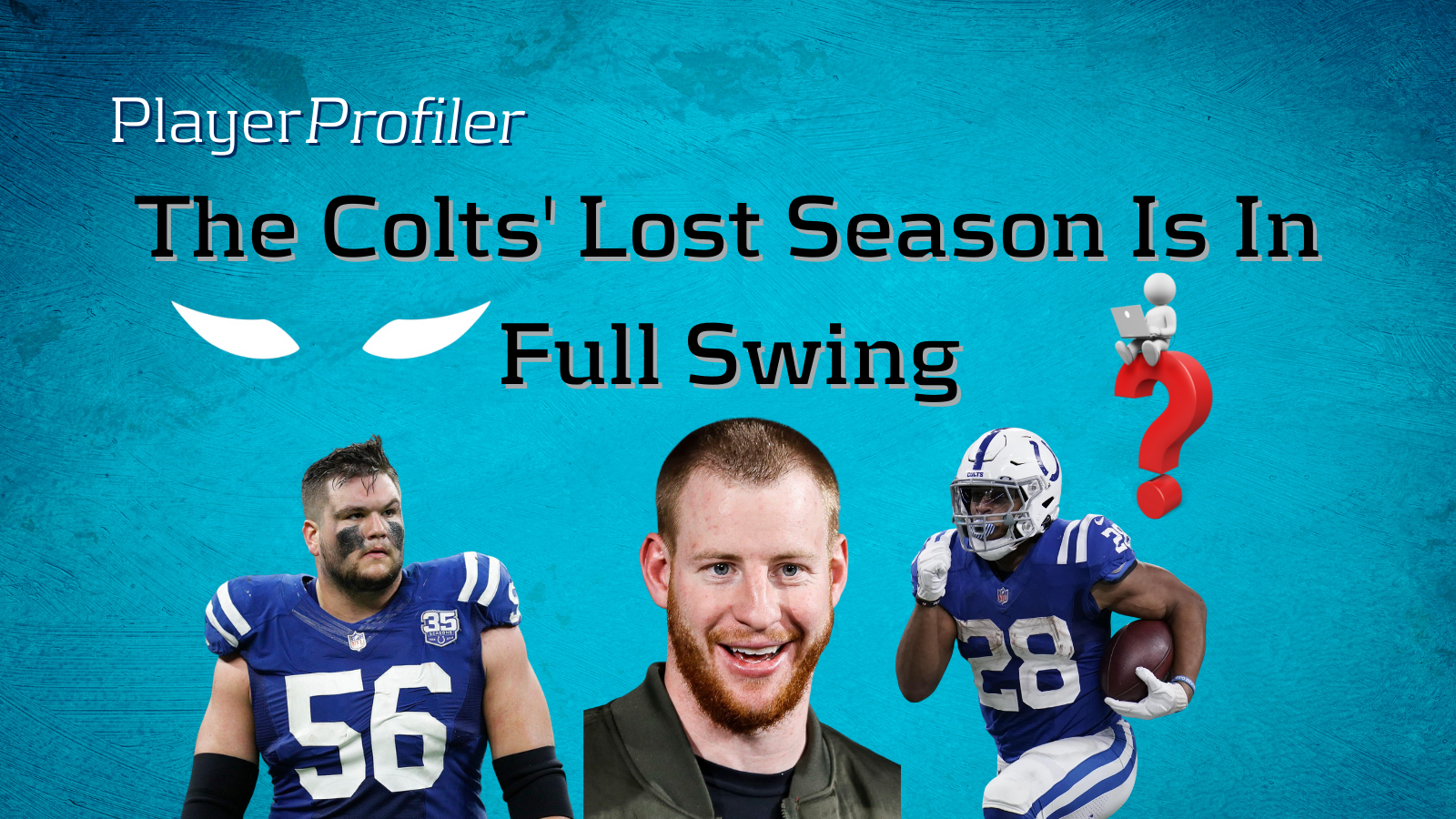 The Indianapolis Colts’ 2021 NFL season in in flux after recent injury news broke pertaining to Carson Wentz and Quenton Nelson. Both players are slotted to miss 5-12 weeks, with both undergoing surgeries for foot injuries. The injury fallout affects every member of the an offense that will open an already lost season without their two most important pieces.

Eason Bound and Down

Colts general manager Chris Ballard is notorious for his reserved and logical approach to roster construction and salary cap management. He and head coach Frank Reich worked hard in the 2021 offseason to hold ’em rather than go “all-in.” They explored positions of need in free agency, but didn’t make any aggressive moves. Players like Julio Jones were “on the radar,” but never firmly in the crosshairs. The messaging this offseason was the direct opposite of their 2020 offseason, with multiple free agent signings alongside Philip Rivers. This front office also has no qualms with “tanking” to pursue a quarterback of the future. This was the approach they took in pursuing Andrew Luck after losing Peyton Manning.

This was always designed to be a tryout year for Wentz, essentially a low-risk gamble at a franchise QB. Either he bounces back or the team ends up with a high draft pick. This injury provides the perfect excuse to toss the season, maintain the roster, and look forward to 2022. Jacob Eason is projected to begin the season as the starting quarterback, and Wentz’ chance of having an efficient 2021 plummets. Even when he returns, there’s a strong chance his foot injury affects his footwork and mechanics. This is a serious problem when banking on a strong bounceback to his once-MVP form.

The smart bet here is to expect poor quarterback play for a large chunk of the season. Eason may surprise, but the floor is too low to bank on such a longshot. Wentz faces an uphill battle and may display poor performance even once healthy. This season is lost for Colts, and fantasy expectations should be throttled across the board.

The most obvious fallers would be any receiver tethered to Carson Wentz. The expectation was that he would play at an average level and provide value in this offense. Michael Pittman is a second-year breakout candidate. Parris Campbell is a dark horse contender for Comeback Player of the Year. T.Y. Hilton is a proven veteran with a strong fantasy floor and spike week upside.

At least, that was the case.

Fortunately, none of these players came with a high price tag in offseason drafts. However, all should now be dropped down draft boards. The overall volume, Average Target Distance, and Money Throw total will fall short of any initial projections for this team. Assuming Jacob Eason is purely a backup quality player, the most frequent targets will be safe and close to the line of scrimmage.

T.Y. Hilton was the downfield threat in 2020 and projects for a similar role in 2021. In 15 games played, he led the team with 1,166 (No. 28 among qualified wide receivers) Air Yards, 13.6 (No. 38) Yards per Reception, and 56 (No. 44) receptions. He averaged 10.8 (No. 48) Fantasy Points Per Game with a 7.50 (No. 30) Target Accuracy rating. The quarterback play was already poor, but is now at risk of becoming even worse. Hilton’s ADP will freefall due to his age, but he still offers a decent fantasy floor. He can be a “safe” late teens pick in Best Ball. For redraft leagues, his lack of upside makes him a soft Flex option. The chance of a Michael Pittman breakout puts his workload at risk, and poor offensive efficiency lowers his touchdown upside. Hilton should be valued as a fringe WR6 with many reasons to see a decline.

Michael Pittman finished his rookie season with 40 (No. 68) receptions for 503 (No. 69) receiving yards and only one (No 108) total touchdown. He earned minimal involvement despite appearing in 13 total games. His 13.8-percent (No. 95) Target Share in 2020 is an overall disappointment, but apparently enough involvement to be considered a “second-year breakout candidate.” It’s already a long shot with no real breakout in 2020 and having barely scraped past Zach Pascal in weekly usage.

With a higher Snap Share percentage than his teammates, Pittman clearly has a role on this team. His inability to earn a higher Target Share is concerning, but it’s good to know he will be on the field. Don’t bet on a full on breakout this year, but expect him to eat into T.Y. Hilton‘s workload. Pass on Pittman in all redraft formats, hold in dynasty.

Zach Pascal and Parris Campbell garner interest in deeper leagues given their heavy slot usage. It is reasonable to assume Jacob Eason and/or a recovering Carson Wentz will lean on safer slot passes. Pascal was the clear slot receiver for the Colts following Campbell’s Week 2 injury last season. He can be considered for a late round dart throw after a logging a 94.9-percent Slot Rate in his limited appearances last year. The injury risk is TREMENDOUS, but his explosiveness and role open the door to splash weeks. A sub-5-percent exposure rate in Best Ball is reasonable, but he should be faded in any type of redraft league. Sell low in dynasty if you can, and shed the injury risk from your team.

Pascal is the perfect WR9 or WR10 to target in a deep Best Ball league. We know he will play, and if Campbell is a bust, then he will return 3-5 useful weeks. Otherwise, there is no need to pursue Pascal in any format. He will be waiver wire fodder in casual leagues.

Jonathan Taylor has been overpriced all offseason at the end of the first round. The case for Taylor relies on his league-breaking talent to overcome workload issues and poor offense. It’s a poor bet to expect him to overcome a split workload and losing his best blocker for 5-12 weeks. He has RB1 upside and will finish in the top 24 at worst thanks to his player profile.

Draft Taylor as a low-upside RB2 with splash week potential. These two injuries 100-percent hurt his ceiling this year. Fading him completely is reasonable. Buying low in dynasty is the right move.

Nyheim Hines should maintain about the same value as a satellite back with high target upside. Marlon Mack is a deep stash in dynasty and at the end of zero-RB Best Ball teams. Jordan Wilkins is available for the absolute truthers.

Mo-Alie Cox was pegged as a late round dart throw at tight end. His value now reaches near zero with low touchdown upside on what projects to be a slow-paced offense with a bad quarterback. Jack Doyle is mostly dust at this point in his career. Rookie Kylen Granson offer very little outside of deep dynasty leagues. Don’t bank on this team to provide 2021’s last-round tight end savior.

The Indianapolis Colts should throw in the towel for 2021 and prepare for life in 2022. Carson Wentz may still recover his career, but his chances to do that in 2021 have plummeted now that he needs to recover from this foot injury. Quenton Nelson faces the same uphill battle, which further throttles the offensive projection for 2021.

This team should be mostly faded unless acquired at incredible value. Don’t fall victim to fantasy denial, and place your chips elsewhere if you are chasing a championship.