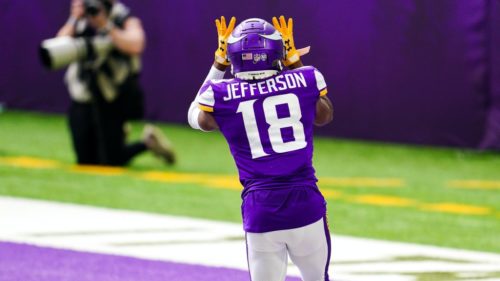 Over the past few weeks, we dove into the 2020 rookie running backs. These rookies ended up as quite an exciting group for redraft and dynasty leagues. Thankfully, 2020 also provided us with 12-plus rookie wide receivers. In this first group, we analyze the most productive 2020 rookie wide receivers in terms of receiving yards. Since this class includes so many intriguing talents, we’ll split them up into at least two articles, looking into the opportunity, productivity, and efficiency metrics. The stock for all of these rookies should continue to rise, even if a few have questionable quarterback situations.

2 touchdowns for ceedee lamb (208 total pts) and he still has no shot at catching justin jefferson (237) for the rookie wr1 title.

Along with numerous opportunities, Jefferson also ranks highly in several efficiency metrics. He boasts a +24.8 (No. 8) Production Premium with 11.2 (No. 4) Yards Per Target and averages 16.0 (No. 9) Yards per Reception. He further proves the efficiency point with averages of 0.51 (No. 11) Fantasy Points per Route Run and 2.19 (No. 14) Fantasy Points Per Target. Heading into 2021, he will demolish his past 2020 ADP and likely rank as a high-end WR2 pushing WR1 territory. He made a strong argument as Minnesota’s top wide receiver and the best in this rookie class.

After a hot start to 2020, CeeDee Lamb faded after Week 5 partly due to Dak Prescott‘s injury. Whenever a backup quarterback comes in, we expect the offensive production to fall, especially when it’s an elite fantasy quarterback going down. For context, through Week 5, Lamb earned 39 of his 102 (No. 27) total targets and 433 of his 892 (No. 23) total receiving yards. That’s 38.2-percent of his targets and 48.5-percent of his yards. However, for this article, we’ll look at his season-long stats to help us paint a full picture. His 892 yards have come on 69 (No. 23) receptions. He’s added six (No. 21) touchdowns and averages 13.3 (No. 33) Fantasy Points per Game. Overall, not terrible receiving production, but one wonders the upside Lamb would present with Prescott healthy.

When comparing the ADP data for Lamb and Justin Jefferson, it’s clear that both outperformed their ADP, but Jefferson smashed it. With that said, Lamb’s 2021 ADP may fall a bit or stay the same, while Jefferson’s ADP will skyrocket. On paper, the Cowboys have a loaded wide receiver core, but Lamb sneakily proved to be one of the more productive 2020 rookie wide receivers in terms of receiving yards. If Prescott comes into 2021 healthy, then he projects more as a backend WR2 in PPR leagues. However, without Prescott, he ranks more as a WR3 with minimal touchdown upside.

Similar to CeeDee Lamb, Joe Burrow‘s injury negatively impacted Tee Higgins‘ production. Up until the Burrow injury, Higgins finished No. 15 or better in fantasy points among wide receivers in four out of nine weeks. After the injury, he finished no better than WR25 in the following five games, outside of Week 16 where he ranked No. 12 against a weak Texans defense. Similar to Justin Jefferson, Higgins outproduced his ADP and performed much better than expected. On the season, he has earned 106 (No. 21) targets and a 20.8-percent (No. 35) Target Share with 1,258 (No. 14) Air Yards, and a 30.1-percent (No. 30) Air Yards Share. He has produced relatively well with these opportunities, logging 67 (No. 25) receptions for 908 (No. 21) receiving yards with a 13.9 (No. 27) Fantasy Points per Game average.

Unsurprisingly, Higgins struggled with efficiency since the entire Bengals offense generally thrived on volume. He holds a a +3.5 (No. 38) Production Premium with averages of 8.6 (No. 41) Yards Per Target and 1.84 (No. 46) Fantasy Points Per Target. With A.J. Green likely gone, Higgins proved that he deserved to earn more opportunities behind Tyler Boyd. With that said, his ADP will rise in 2021 being that he was among the more productive 2020 rookie wide receivers. He could rank as a WR3 if Burrow suffers a setback or a backend WR2 with his quarterback healthy in 2021.

Among the more explosive 2020 rookie wide receivers, Brandon Aiyuk came into the NFL with a 132.0 (92nd-percentile) Burst Score and 98.6 (64th-percentile) Speed Score. He also holds a 40.6-percent (82nd-percentile) College Dominator Rating and 26.9-percent (70th-percentile) College Target Share. Heading into Week 16, he has performed well in six straight games, but we’ll note that he missed time due to landing on the reserve/COVID-19 list during that period. He finished inside the top-15 in five out of the six weeks, with two top-6 performances.

Through 12 games in 2020, Aiyuk averages 15.4 (No. 17) Fantasy Points per Game on 60 (No. 30) receptions, 748 (No. 35) receiving yards, and seven (No. 17) total touchdowns with a 10.6-percent Touchdown Rate. Seeing the discrepancy in Fantasy Points per Game and receiving production tells us that the high Touchdown Rate boosted his fantasy production. Imagine what his fantasy production would look like if he maintained a similar pace to his most productive six-game stretch over a full season.

Although Aiyuk doesn’t rank highly in the efficiency metrics, he commanded the target volume and Air Yards during his unreal six-game stretch. He currently holds a -0.4 (No. 46) Production Premium with a 23.4-percent (No. 32) Dominator Rating and averages of 0.43 (No. 31) Fantasy Points per Route Run and 1.90 (No. 39) Fantasy Points Per Target. Similar to the other 2020 rookie wide receivers on this list, Aiyuk will smash his 2021 ADP since he produced well in about half of his games played.

One question heading into 2021 – what happens to the 49ers offense with all three receiving weapons healthy? Will Aiyuk earn healthy Target and Air Yards Shares with Samuel and Kittle around? Unfortunately, Aiyuk suffered a high ankle sprain that ends his season one game early while also finishing the season with one catch for 15 yards in Week 16. He deserves and should command consistent opportunities in 2021.

If we ranked this group of 2020 rookie wide receivers by athleticism, Chase Claypool would easily rank at the top. He came into the NFL with a 129.8 (99th-percentile) Speed Score and 131.9 (92nd-percentile) Burst Score. He has displayed his elite athleticism and explosiveness in several games this season. Although he lacks a high Target Share, he has earned a decent amount of targets and a ton of Air Yards. He has commanded 98 (No. 29) targets, a 16.1-percent (No. 61) Target Share, 1,221 (No. 17) Air Yards, and a 28.1-percent (No. 36) Air Yards Share. Before Week 8, he received inconsistent opportunities outside of a Week 5 game where he exploded for seven receptions, 110 receiving yards, and four touchdowns. Fortunately, the Steelers average 41.7 (No. 4) Team Pass Plays Per Game and spread the ball around with their high passing volume. 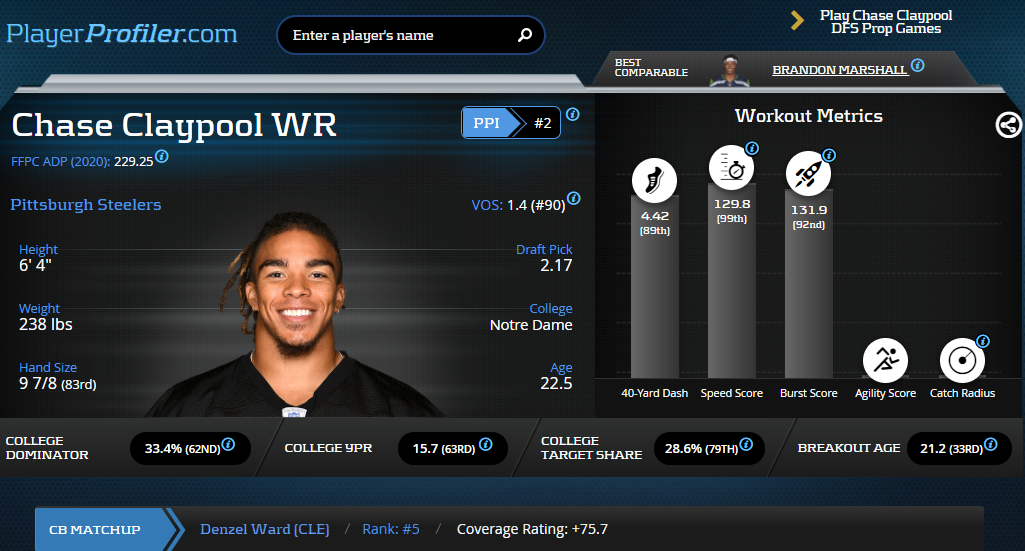 Most of Claypool’s fantasy production came via his ten (No. 5) touchdowns, or a 14.9-percent Touchdown Rate that ranks near Nelson Agholor and Will Fuller. In terms of efficiency, he ranks No. 50 with -2.7 Production Premium and 45th with a 22.1-percent Dominator Rating, meaning he has accounted for just under one-quarter of the total team receiving yards and receiving touchdowns. A couple of other efficiency metrics to note, he averages 0.48 (No. 18) Fantasy Points per Route Run and 1.96 (No. 30) Fantasy Points Per Target. For context, he has logged 404 (No. 49) Routes Run and scored almost half a fantasy point on every route.

Although Claypool’s stock should rise if JuJu Smith-Schuster leaves in 2021, what happens if Ben Roethlisberger decides to retire? Granted that Roethlisberger struggled and relied on volume, not efficiency in 2020, we can’t forget the significant dropoffs with the team’s current backup quarterbacks. Will Claypool have a competent quarterback in 2021? Overall, I’m a bit more hesitant on him when comparing the other most productive 2020 rookie wide receivers. Although his ADP likely rises, he’s more of a boom/bust WR3 in 2021. However, similar to Brandon Aiyuk, he should command more opportunities heading into 2021.