The Week 9 TNF Showdown features the Eagles at the Texans. I’ll be guiding you through the important aspects to watch in each Thursday night matchup. Without further ado, let’s see what Philadelphia and Houston have in store for us as the Eagles look to continue their reign of perfection.

Advanced stats and analytics will be utilized to identify favorable matchups and players to avoid. The purpose of this article is to paint a picture of how the teams play and match up with one another in less than 1,000 words.

The Eagles are flying higher than ever. They are singing to the tune of a 7-0 start. Piloting the flock is Jalen Hurts, who is surging with 25.2 (No. 2) Fantasy Points per Game. His 11.3 carries per game and six rushing touchdowns leads all quarterbacks. More impressively, his 25 red zone carries rank second amount quarterbacks and running backs trailing only Nick Chubb (28). Against another inferior opponent, expect an air assault early in a game that’s mostly over before it starts.

In the spirit of Halloweekend, A.J. Brown murdered the Steelers’ secondary. Not one, not two, but three times he and Hurts connected for a score. Brown has a stranglehold on the opportunity and production in the passing game. He’s earning a 44.2-percent (No. 2) Air Yards Share and 3.08 (No. 3) Yards per Team Pass Attempt. In fantasy he’s been reliable, reaching five receptions in all but one game. He draws a favorable matchup against an uninspiring Texans secondary.

AJ Brown's 659 receiving yards through 7 games is the most by an Eagles player since Terrell Owens in 2005.#Eagles pic.twitter.com/gyxL4uTxpM

Get ready for the Devonta Smith squeaky wheel game. Smith had the quietest eight-target game the NFL has ever seen against Pittsburgh, which is his fourth game with seven or more targets this season. The opportunity, however, yielded only 23 receiving yards. With an 8.6 (No. 77) Average Depth of Target and six (No. 43) Deep Targets, his opportunity to explode through chunk plays is limited. In the one game Smith saw the majority of the air yards, he racked up 169 receiving yards and a score. In a desperate attempt to stay involved, the Texans will shift focus to containing Brown and Hurts, leaving Smith in a position to boom.

Prior to Sunday, Dallas Goedert notched a red zone target in five straight games. While that streak did not continue, he earned five targets for the fifth time this season en route to a six-reception, 64-yard performance. He is making most of his production happen by himself, with 343 of his 421 receiving yards coming after the catch. Being the third target on such a high-powered offense gifts him with a 19.7-percent (No. 6 ) Target Share. With his level of opportunity, Goedert is a start every week. 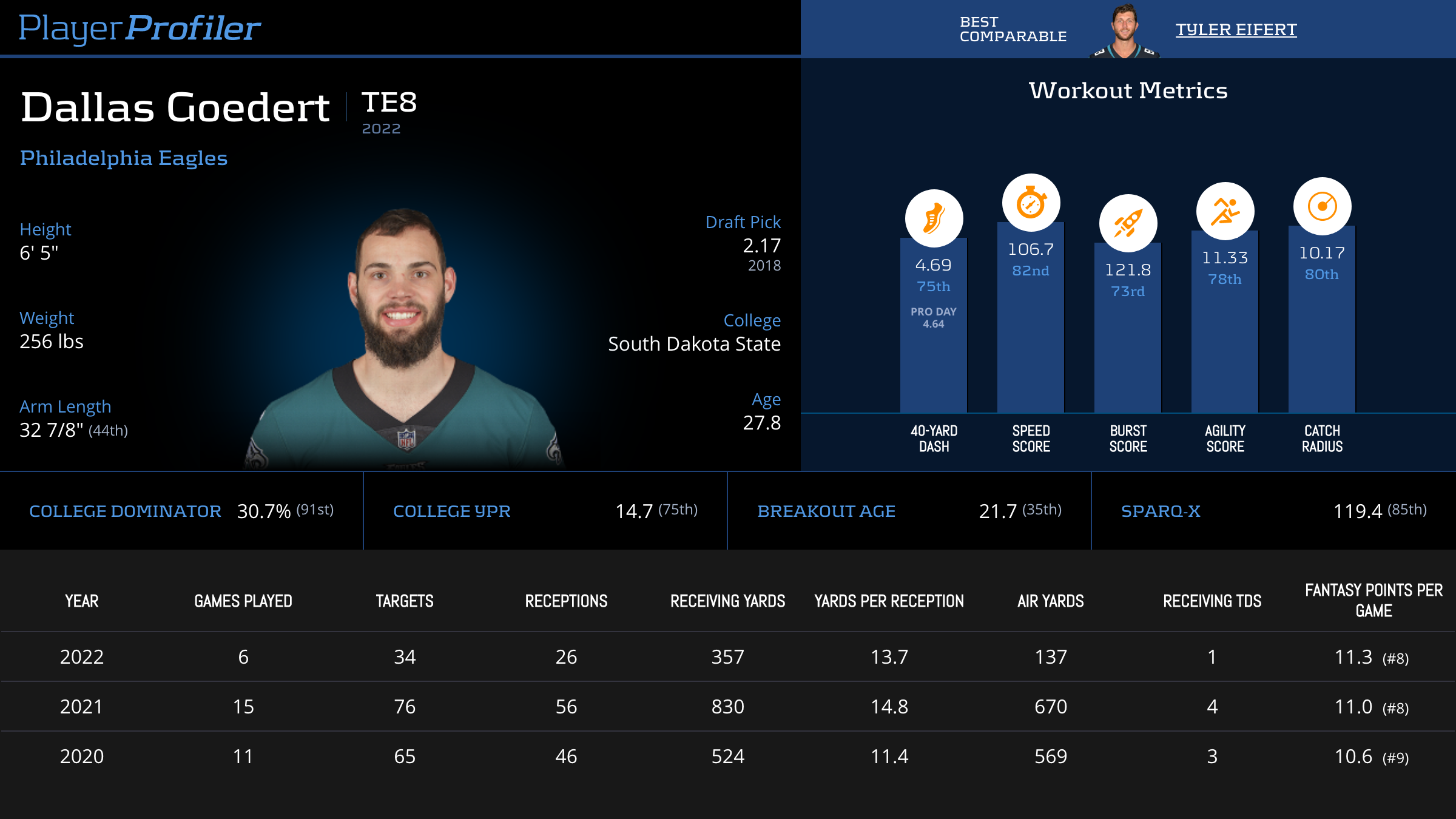 Miles Sanders has officially put the scoring droughts behind him and is one score away from tying his career high in touchdowns only seven games into the season. How the tables turn. He’s sidelined Kenneth Gainwell as he’s earned five carries more per game this season than last and is receiving more touches in the red zone. His efficiency numbers don’t jump off the charts, but he’s an effective ball carrier and has the explosiveness to generate chunk plays. The Houston Texans happen to be the best defense at allowing opposing running backs to make said chunk plays. They have now allowed at least 140 rushing yards in their last two games. Start Sanders with confidence.

Davis Mills is not that guy, pal. Posting more games with under 10 fantasy points (3) than games over 20 points (0), the hype train has come to a crashing halt. He can make the big plays, posting 15 (No. 4) Money Throws, but he struggles with the easy plays. His 65.4-percent (No. 31) Clean Pocket Completion Percentage and 7.1 (No. 30) Clean Pocket Accuracy Rating are the hallmark of a late-round quarterback who doesn’t have it. Fade Mills and expect an interception against a top three defense in pass DVOA (per FootballOutsiders). He’s thrown six interceptions in the last five games. 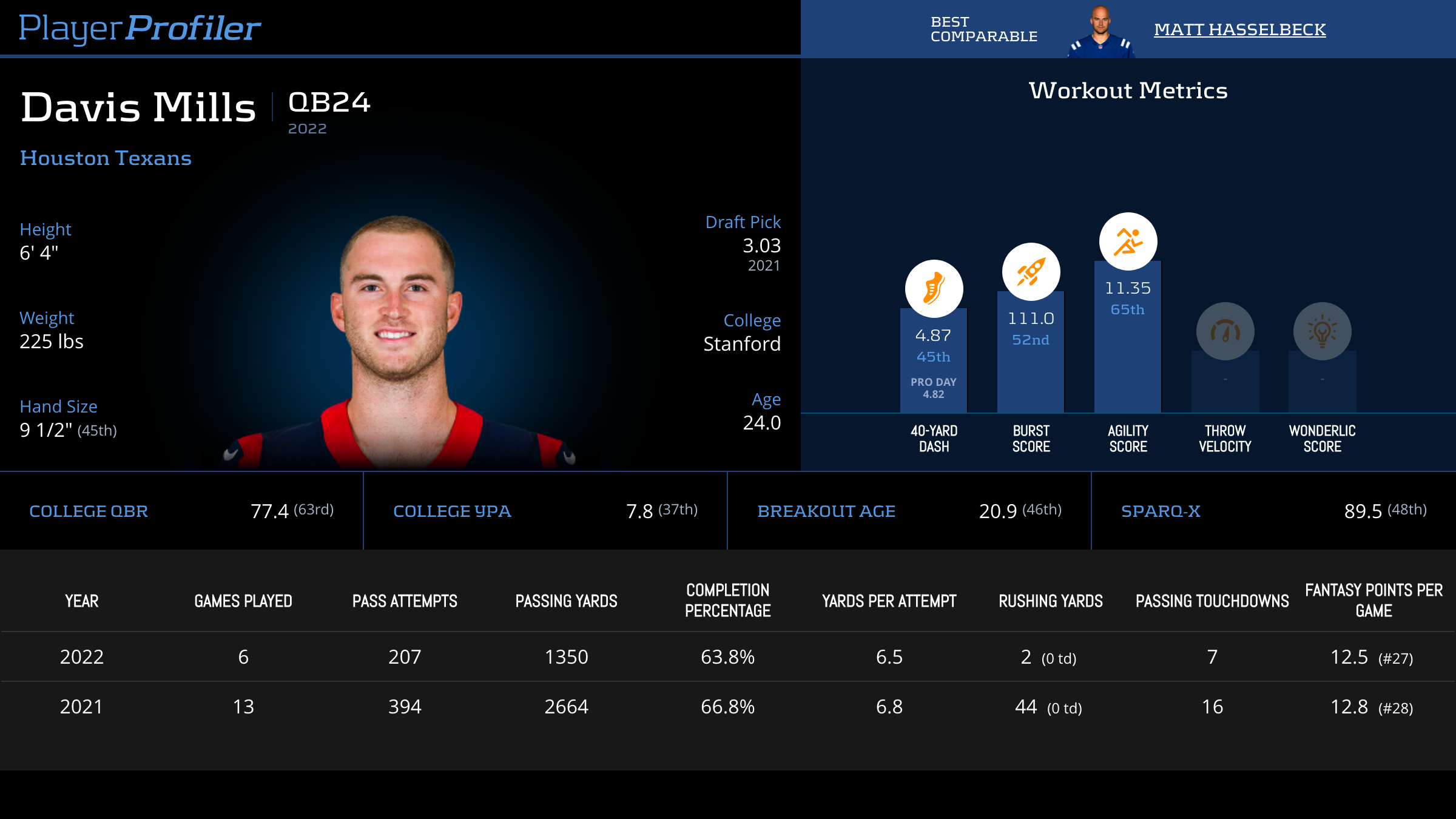 You have to give free-thinking coaches a tip of the cap. Despite a 1-5-1 record, and a -2.85 (No. 23) Game Script, the Texans continue to establish the run no matter the situation. Rookie Dameon Pierce has stepped into a bell-cow role earning 17.3 carries per game and a 10.5-percent (No. 22) Target Share. The hard truth is that he is yet another siren song, another back who lures in fantasy players with counting stats (see: Harris, Najee). He ranks highly in Yards Created, Evaded tackles, and Breakaway Runs, but his per-touch efficiencies in the same categories are all below average. Given the opportunity volume in the rushing and passing game, Pierce is a flex play against a rush defense that allowed 50 yards to Jalen Warren last week.

Somehow, Brandin Cooks is still a Texan. Despite doing everything he could to be shipped off, Houston held on to the veteran receiver. It makes no sense, but I suppose I can wrap my head around wanting to hold onto your only functional asset at the position. Earning a 23.7-percent (No. 27) Target Share, he has yet to draw less than five targets in a game this season. The opportunity hasn’t been translating into production as he’s yet to clear 90 receiving yards in a game. While his efficiencies are at their lowest marks since 2019, it’s tough to blame Cooks for his sluggish play. The 29-year-old faces all of the defensive attention, and will draw Darius Slay tonight, who has yet to allow more than 60 yards in a game this season. This is a matchup worth fading Cooks who is clearly upset about remaining in Houston.

Don’t take a man’s kindness for granted. Covered for the lies for too long those days are done. Crossed the line with playing with my career 🏹

Beyond Cooks, the Texans receiving options are grim. Nico Collins is the number two target when healthy but has been far from reliable. Collins missed last week’s contest with a groin injury and is out tonight as well. Phillip Dorsett saw five targets last week and found the endzone in Collins’s relief. While the opportunity is enticing, he connected on only one pass for six yards last week and is a full sit versus James Bradberry. His speed makes him a nice option in DFS Showdown contests but stay away in seasonal leagues.

The Texans run a tight-end committee as they give us no clear-cut option. “Freshly Squeezed” O.J. Howard, Jordan Akins, and Brevin Jordan have been fighting for the opportunity. Jordan appears to be the group leader as he’s earned four targets in each of his last three contests. Only one member of the group, Akins, has amassed 50 receiving yards. Jordan is the bet to make if you’re looking for a deep DFS flyer

The Eagles fly into Houston as 14-point favorites. This is easily the largest spread since I’ve begun writing these preview pieces. Usually, these are the lines I stay far away from. You need conviction to bet on a two-touchdown victory, and that’s what I have this week. The Eagles have the best top-to-bottom roster in the league, barring (maybe) the Bills. They’re firing on all cylinders and running a hyper-efficient offense. Houston, on the other hand, is lifeless. Houston is going to struggle to score points, and the Eagles run away with this one early. I’m taking Philly to cover the spread.

The point total is set at 45 points. While the over is enticing, the Eagles barely covered this number last week. I expect tonight to be a similar beatdown at a slightly slower tempo. The lifeless Texans will be lucky to put points on the board, and Philly will likely opt to pump the breaks earlier on while facing short rest. The Eagles already work at a mid-tier Pace of Play and will be enticed to churn the clock. I’m going with the under this week.