Without further ado, let’s get into this matchup between the Dolphins and the Saints.

Tua and The Duke

One of the most consistent fantasy QB’s all season, Tua Tagovailoa is leading this team to an incredible end-of-season push. Currently on a six game win streak, Tua has been proving haters wrong with an 8.0 (No. 1 among qualified quarterbacks) Accuracy Rating and a 74.3-percent (No. 2) True Completion Percentage. He’s been supported by a surprising 87.6-percent (No. 5) Protection Rate. He’s a high end QB2 with upside every week, and should be rolled out tonight.

Say it with me everyone, Duke Johnson is in a workhorse role. Myles Gaskin has been relegated, with Johnson turning 22 carries into 127 total yards and 2 touchdowns. The University of Miami’s all time leading rusher has a solid profile and has always shown the potential to thrive in such a role. The bad news is that the Saints have an elite rushing defense and Johnson hasn’t appeared to have relegated Gaskin in the passing game yet. Still, the Duke is a Flex play at worst while working as the backfield leader. 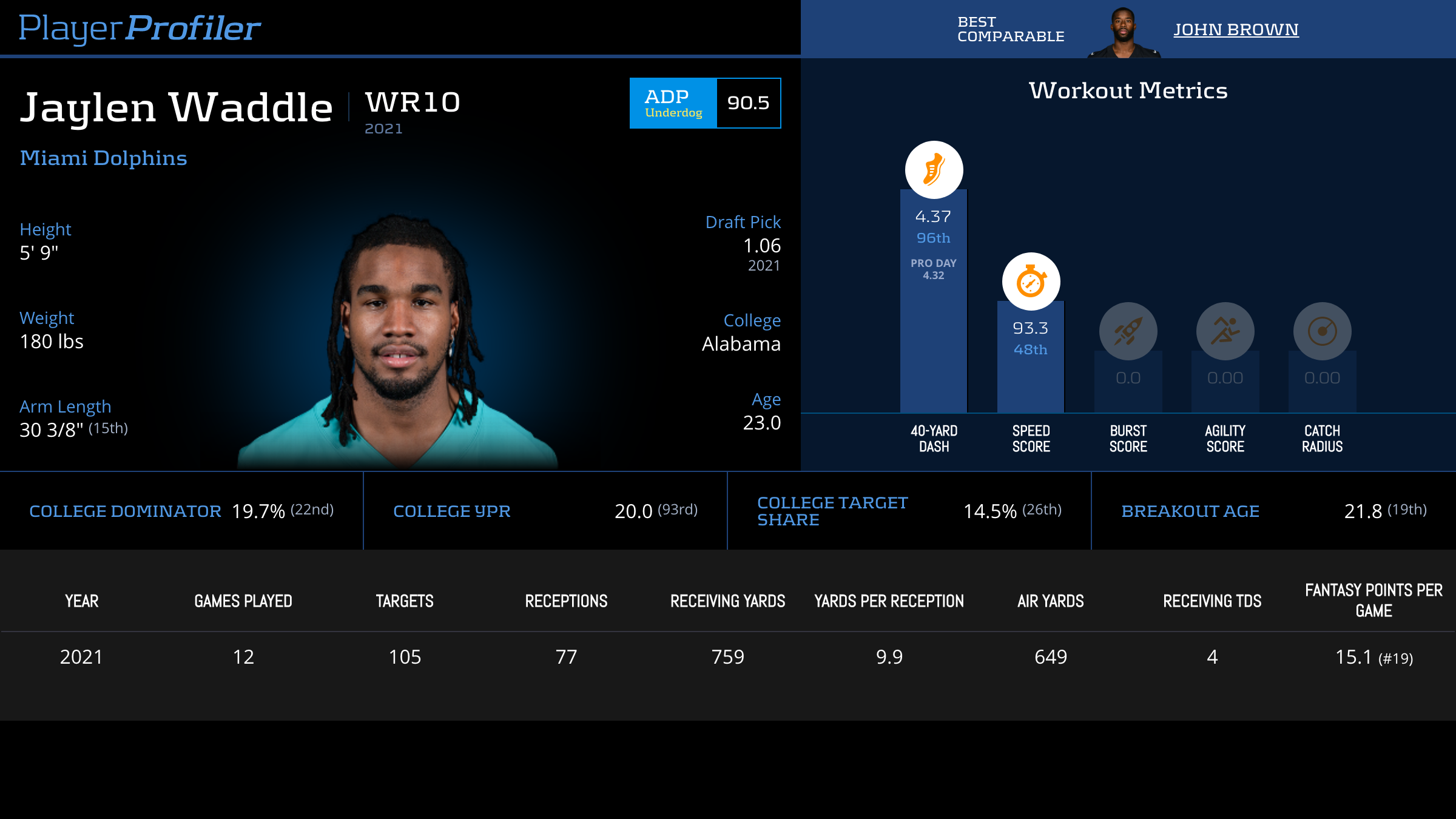 DeVante Parker is enduring an injury riddled season, but when he’s on the field he has WR2 potential. Parker only sees a 22.5-percent (No. 22) Target Share and score 13.1 (No. 27) Fantasy Points per Game, but has earned a 32.5-percent (No. 6) Dominator Rating. He’s a big part of this offense without Will Fuller and will continue to see a larger Target Share for the remainder of the year. He’s a WR2 tonight.

The slot WR masquerading as a TE, Mike Gesicki remains in his role as an inconsistent tight end with tremendous upside. With an 18.9-percent (No. 8) Target Share, he sees a healthy amount of opportunities. However, his production with a full supporting cast is inconsistent. He’s again a high end TE2 with the upside to finish as the weeks top scorer at the position.

Alvin and The Rookie QB

Rookie Ian Book is making his first career start, which doesn’t instill much confidence. He was average at Notre Dame, with an 84.0 (85th-percentile) College QBR, but his profile does match with successful journeyman Colt McCoy. This offense has already allowed Trevor Siemian and Taysom Hill to pose as effective throwers, so to say Book will come out with an average or better performance isn’t completely asinine. Nevertheless, he’s likely to drag down the passing game considerably and should be avoided in fantasy. 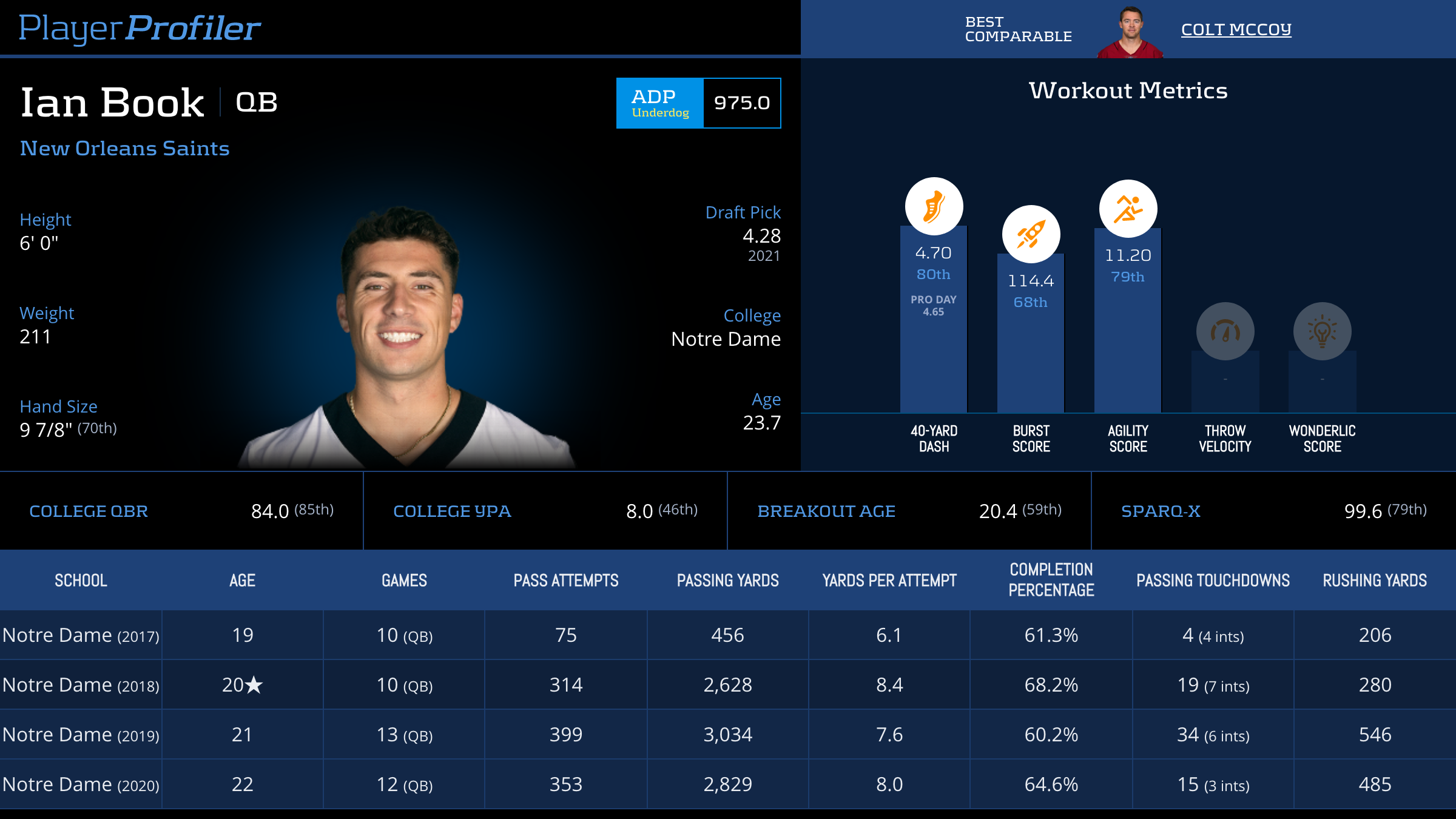 Alvin Kamara remains one of the league’s most dynamic running backs, earning 19.7 (No. 5) Weighted Opportunities per Game and scoring 18.8 (No. 4) Fantasy Points per Game. He’s the most involved back in the passing game, with a 20.4-percent (No. 1) Target Share. He’s efficiency through both the ground and the air and is an elite start every week, especially with backup quarterbacks.

It’s safe to say that Marquez Callaway has not exceeded expectations this season. So far, he’s seen a 16.7-percent Target Share and scored 9.1 (No. 55) Fantasy Points per Game. He’s the best healthy receiver on this team, but production has come few and far between for receivers in this offense in 2021. Playing with Book and lining up against 21st ranked Xavien Howard, Callaway is a desperation WR3 play. 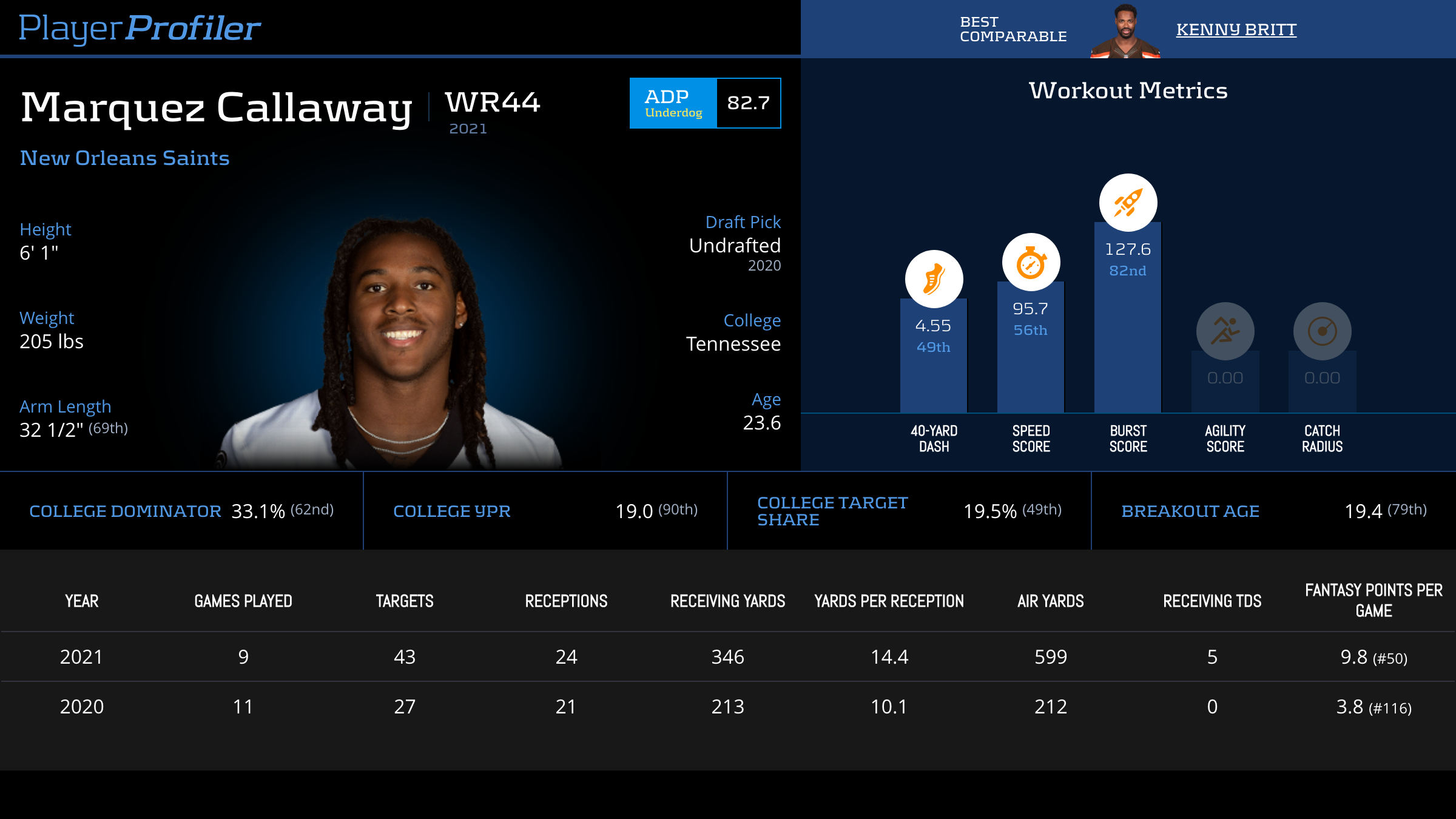 Not that it really matters much, but Tre’Quan Smith is the team’s WR2. He gathers 4.8 targets per game and does very little with them. He has little potential in this game. Adam Trautman, however, could be in store for a larger role now nearly two weeks removed from his stint with an MCL sprain. While Trautman shouldn’t be rolled out this week, he had showed promise prior to being injured and has the potential to see a high target volume.

The Saints are not a very good team, and are now COVID-ridden. Meanwhile, the Dolphins are on a hot streak as they make their yearly end of season push into mediocrity. The spread is set at 3 points in favor of the Miami Dolphins. While the Saints have a solid defense that can keep them in the game with anyone playing quarterback, the Dolphins are currently the better team and will win easily. Miami will dominate the field position battle and will win by at least a touchdown.

The point total is set at 37 points. Miami plays at a fast pace, while New Orleans prefers to take their time. The defenses are going to be the focal point of the game, and will surely keep the pace of this game contained. However, 37 points is a low total and it’s likely that a lack of Saint’s offensive production leads to a big week for the Dolphins offense. I’m taking the over in this one.