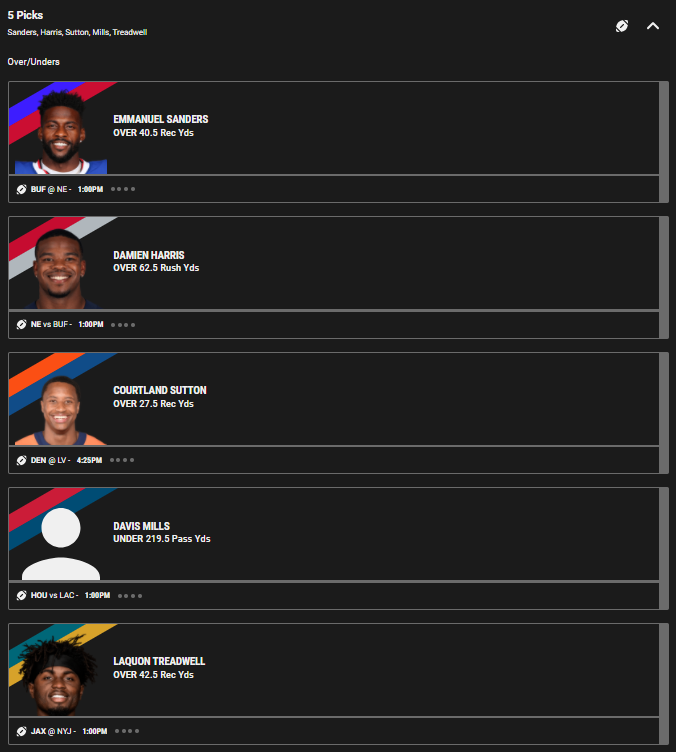 Open your heart to Laquon Treadwell and lock him into every Pick’em slip because he is going to smash the OVER for the fifth time in a row. He has been the target leader on the Jaguars since becoming a starter in Week 12 and his Target Share will have a nice cushion with Laviska Shenault OUT this game. Treadwell has averaged a 90.4 Snap Share since Week 12, showing that he will have plenty of opportunity to amass receiving yards against PlayerProfiler’s No.118-ranked cornerback, Brandin Echols.

Veteran wide receiver Emmanuel Sanders is set for big opportunity in pivotal division matchup today against the Patriots. The Bills will be without both Cole Beasley and Gabriel Davis, resulting in a target void that Sanders will have to fill on team that runs 38.4 (No. 4) Team Pass Plays Per Game. And the icing on the cake for this line is that Sanders has a 16.2 (No. 3 among qualified wide receivers) Average Target Distance, demonstrating that he will hit this line in the first half with his presumed spike in volume.

The theme of the picks thus far has been COVID-19/injury induced opportunity. Another prime example of this is the Damien Harris rushing line on Underdog Fantasy. The Patriots will be without Rhamondre Stevenson and potentially Brandon Bolden, leaving Harris with the lion’s share of carries against a Buffalo team that has allowed 170 rushing yards per game in the last three games. Harris torched the Bills in Week 13 with 111 yards on 10 carries and while his efficiency will certainly regress, his opportunity will boom on a team with 28.4 (No. 8) Team Run Plays Per Game.

Yet again, absences driven by COVID-19 are fueling another pick. Houston’s No.1 wide receiver Brandin Cooks is OUT, giving Davis Mills a slim chance to hit the OVER against the Los Angeles’ stifling passing defense. Vegas also predicts the Texans to faceplant because they have a implied team total of 17.5 points. Mills has 217.4 (No. 30) Air Yards Per Game WITH Cooks, so it’s a safe bet to take the UNDER.

Drew Lock will bring Courtland Sutton back to life this weekend in a friendly matchup against Las Vegas. 27.5 receiving yards is a modest line for a player with 772 (No. 2) Unrealized Air Yards. Sutton’s 15.6 (No. 4) Average Target Distance on a 429 (No. 18) Routes Run indicates that he is receiving the type of targets and opportunity to crush this line with the heralded gun slinger, Drew Lock. 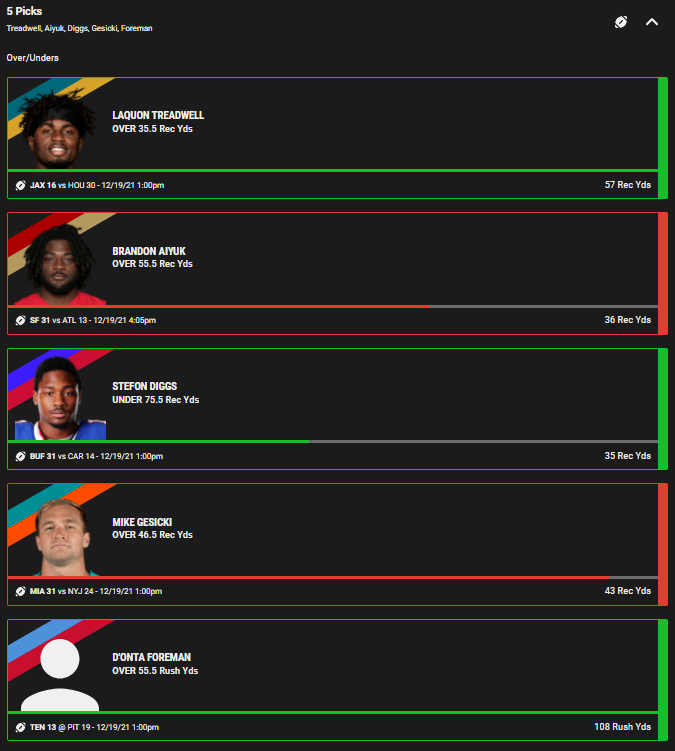 My No. 1 pick, Laquon Treadwell, did it again with 57 receiving yards against the Texans. Treadwell has proven he is a top-target for Trevor Lawrence, so I’ll keep hammering this line until it crests 50 receiving yards.

Brandon Aiyuk had a 100.0-percent Snap Share against the Falcons, but he only managed 1 reception for 36 receiving yards. Alas, it was a day for George Kittle, Deebo Samuel and the rushing game, not one for Aiyuk.

My guilty pleasure is hitting on the UNDER for stud wide receivers like Stefon Diggs. It’s incredibly difficult for me to push the button on the UNDER for a player of Diggs’ caliber, but I was confident that top-rated cornerback Stephon Gilmore would limit his production.

Mike Gesicki not hitting the OVER was heartbreaking because I had him and Laquon Treadwell in over 50-percent of my Pick’em slips. Gesicki finished the day with 43 receiving yards on 5 receptions, just missing out on hitting the OVER.

D’Onta Foreman crushed this line on 22 carries on a 41.0-percent Snap Share. This goes to show how often the Titans run the ball.