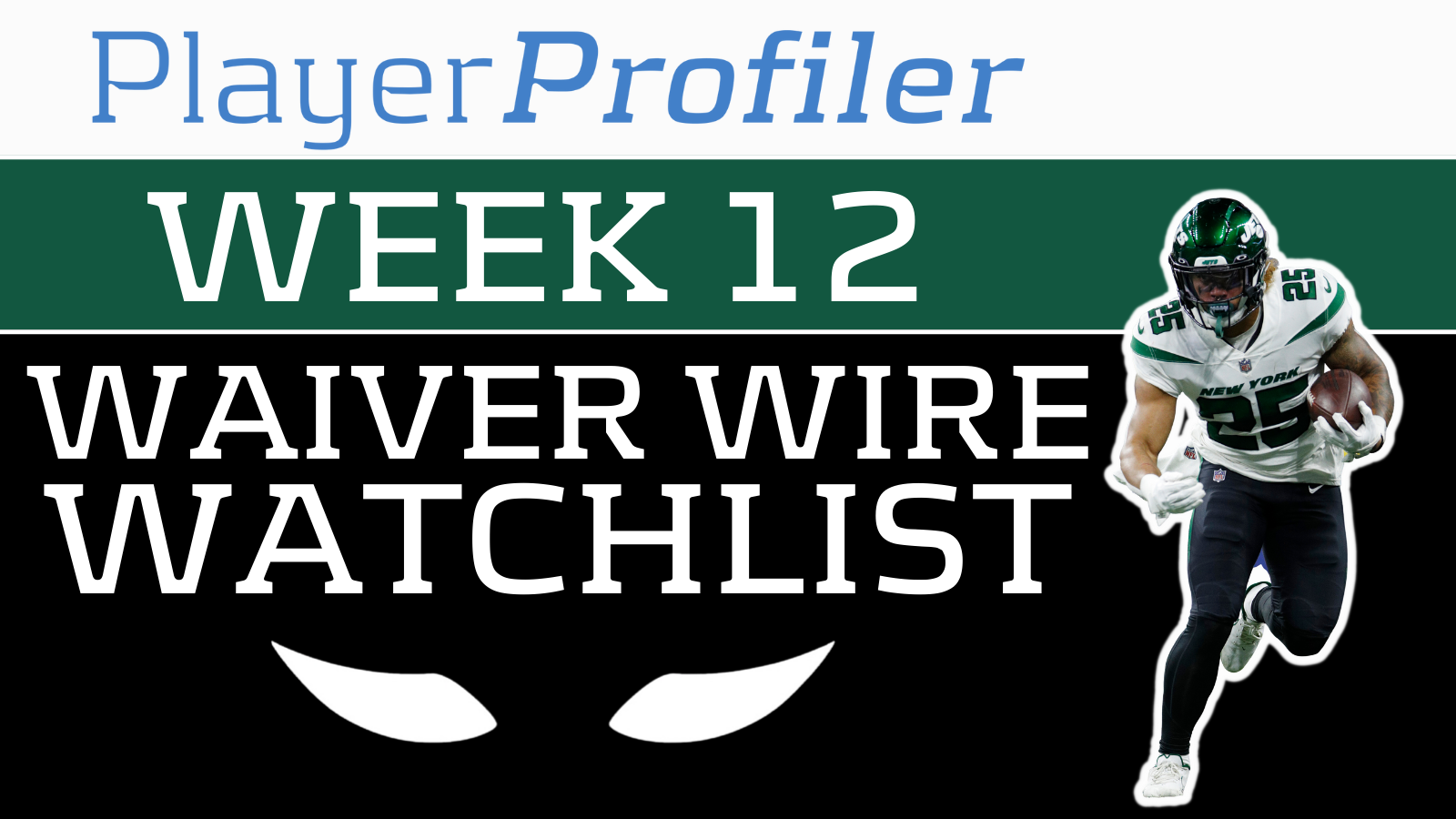 We have reached Week 12 and the busiest non-Sunday fantasy football day of the year: Thanksgiving Day. Every season we are treated to an NFL triple-header that coincides with the tail end of the fantasy football regular season. This magical day of great food and family has special meaning for fantasy football grinders- a chance to get a big start to an essential and often must-win week for our fantasy teams.

But this year, the Thanksgiving day teams come limping in. All six teams lost this past Sunday, and they did so with a lot of offensive futility. We kick off Thursday with Detroit and Chicago, and their combined 23 points scored this past weekend. Dallas got steamrolled in Kansas City 19-9 and will be missing CeeDee Lamb (concussion) and Amari Cooper (Covid-19). Las Vegas lost 32-13 and is on a downward spiral. Buffalo received a shocking home beatdown 41-15 at home against Indianapolis. I am pretty sure Jonathan Taylor just scored another TD as I am writing this article. The Saints scored seven points in the first three quarters before rallying for 22 fourth-quarter points to lose 40-29. Woof.

Add in bye weeks to Kansas City and Arizona, and fantasy players are treading in dangerous waters this week.

Week 11 did have some bright spots. Taylor and Austin Ekeler and both posted historically strong performances with four and five TDs, respectively. These players crushed this past week and look like league winners down the stretch. We also saw some strong QB performances from Justin Herbert and Jalen Hurts, and a rejuvenated Cam Newton. Hopefully, readers of this article grabbed Newton last week as the window to add him is now closed as he posted a top-five QB performance and looks to be a QB1 moving forward.

We saw the rookie WR class continue to shine as Elijah Moore and Jaylen Waddle went head to head with 16 receptions and three TDs combined. (Hopefully, you grabbed Moore when we recommended him earlier in the year- he is now a weekly starter).

If Lamb and Cooper were not enough, we would have to deal with more injuries this week. Michael Carter should miss multiple weeks with an ankle injury. Elijah Mitchell missed this past weekend with a finger injury and should be monitored. A.J. Brown suffered hand and chest injuries this past weekend, and his status for Week 12 is up in the air.

Be active with waivers this week. Some players may be available in your league that are not listed in this article. If you are in great shape heading into your league playoffs, continue to shape the bottom of your roster. If you are in need of wins to make the playoffs, be aggressive. Saving FAAB $ does not help you if you are eliminated.

Another key this time of year is to see what your opponent needs and try to add that one player who could really help them. Last week, I had a league where I needed a QB with Matthew Stafford on bye and was able to add Newton. My opponent had a lot more FAAB than I did and could have easily added Newton, but did not. These small moves can be the difference between winning and losing. A backup for you may be a valuable starter for your opponent.

“Not available in my league,” guy will not like me writing about him, but he could be available in your league.

Cam Newton’s return to Carolina might be my favorite NFL storyline this year. Forever a baller pic.twitter.com/2sjyBmcaTt

If Cam Newton is somehow available, grab him. He is an easy QB1 and looks rejuvenated.

Superflex and QB-needy teams should take a look at Tyrod Taylor. He has a low ceiling, but can be used in a pinch this week due to his rushing floor. He found the end zone twice this past weekend in a big win against Tennessee. This week, the lowly Texans look to make it two in a row in a plus matchup against The Jets.

Another streaming option for this week. Washington has won two straight against Tampa Bay and Carolina, and looks to make it three in a row against Seattle. Taylor Heinicke threw three TD passes this past weekend and finally gets back reliable TE Logan Thomas.

These guys can help ⬇️ pic.twitter.com/BOLIlVKsHA

A weekly reminder that every RB Handcuff that would see similar volume as the starter should be rostered whenever possible. Players like Samaje Perine.

Michael Carter is out for at least two weeks. Ty Johnson split time with Tevin Coleman, but outsnapped him last week. Expect Johnson to see an even larger share of the RB work this week. We have already seen his ability as a receiver with three games of five receptions or more. Treat him as a high end RB3/flex play this week.

Matt Breida has now been the most productive Bills RB for two weeks in a row. This past weekend, he rushed for 51 yards and added a 16 yard reception. Leave him on your bench for now, but try and add him on the chance his volume increases.

I give up on trying to predict the Titans RB usage. In this article over the past few weeks, I debated Adrian Peterson vs. Jeremy McNichols. Later I took the L and predicted more work for D’Onta Foreman. This past weekend McNichols was announced out with a concussion and I was convinced this would be a Foreman game. Out of seemingly nowhere, Dontrell Hilliard dominated snaps 51-15 each for Foreman and AP.

The answer to the Jeremy McNichols vs. Adrian Peterson debate?

We could chalk this up to the Titans playing from behind, but we cannot ignore this sort of snap disparity. This backfield is a mess, but Hilliard is worth a cheap bid to see how it shakes out.

Latavius Murray’s return from injury coincided with Le’Veon Bell’s retirement. He had 10 carries and played second-fiddle to Devonta Freeman (16 carries and the game-winning TD), but both should be on fantasy benches in case one pulls away from the other.

Jeff Wilson disappointed fantasy managers with only 50 yards rushing, but had an impressive 19 carries. Trey Sermon saw ten carries, but Wilson is the back to use if Elijah Mitchell is out again.

Tre’Quan Smith has had a solid  three-game stretch after coming back from injury. He has had 15 targets his past two games and could see an even more significant role with Adam Trautman out for at least a month.

Smith will be a potential flex play on Thanksgiving in a game where the Saints will be aggressive offensively.

Cedrick Wilson makes for a streaming option with CeeDee Lamb and Amari Cooper out. This past weekend, he was second on the Cowboys with seven targets. He has a chance to hit or exceed that target total against Las Vegas. Consider Wilson to be a high-end WR4 this week.

Marquez Valdes-Scantling led the Packers with 10 targets this past weekend, including a 75-yard TD grab. He finished with 123 yards receiving and has a plus matchup this week as Green Bay faces off in a potentially high-scoring game with the Rams. MVS can be frustrating at times, but he has big-play potential and can be started if you need a flex with upside.

Check and see if Van Jefferson was cut during his bye week. He is an every-week WR3 and should be rostered in every league.

For weeks I have written about Logan Thomas as a potential addition and his impending return. Thomas should immediately step into an every-down role and be a big part of the Washington offense. He is the number one TE add if he is available in your league.