This is the Infirmary Report: Post Week 11! The worst part of our beloved game is the frequency of injuries. It’s an unfortunate byproduct of such a fast-paced, contact-heavy sport. It’s something that is important to remember as we approach the first full week of the preseason. Luckily for the NFL players, they have access to some of the best doctors in the world and can usually return to form at least by the next season. Unfortunately for us fantasy players, it’s not always easy to know when a player will get hurt. To another degree, sometimes your roster isn’t big enough to plan ahead for an injury. This series, the Infirmary Report, will give you advice on the injuries that have happened every week during the season. Without further ado, here is the Infirmary Report: Post Week 11 of regular season action.

Injury: Pitts injured his knee in Sunday’s win over the Bears and didn’t return to the game.

Expected Return: The exact severity and timeline are still unknown. He will probably miss at least a couple of weeks.

This is a devastating blow for Pitts truthers, Falcons fans, and all football fans in general. When a star like Kyle Pitts goes down, no one wins. Don’t think you can go pick up Parker Hesse, Anthony Firkser, or MyCole Pruitt and get production.

Early indications are that Kyle Pitts did NOT tear any ligaments in his knee, sources tell @theScore.

An MRI in the morning will confirm, but the #Falcons remain optimistic about their star TE.

We could barely even count on Pitts to produce in this offense. The Falcons will lean on Drake London, Cordarrelle Patterson, and Marcus Mariota‘s rushing ability. Damiere Byrd may see an extra deep shot or two as he seems to be who the Falcons go to when desperate.

Injury: Fields injured his shoulder in Sunday’s loss to the Falcons.

Expected Return: The exact severity and timeline are unknown, and he is currently Questionable for Week 12.

Depending on the severity of this one, this one could be a devastating blow to the Bears, but also a huge blow to those that bought into his recent QB1 performances. Justin Fields was finally breaking out and becoming a young star. Like Pitts’s injury, there is no winner here.

Trevor Siemian will not bring this Bears team into anywhere near the same position Fields near Superman performances were. David Montgomery will get a boost as he should see more carries. Make sure you pick up Trestan Ebner in case Montgomery goes down again. Even if Fields is out there sooner rather than later, he will not be 100-percent.

Injury: Mixon suffered a concussion during the win over the Steelers.

Joe Mixon has been declared out with a concussion. https://t.co/dyxkyEBHGq

If Mixon misses Week 12 due to this concussion, you can surely fire up Perine as a top option in Week 12. Make sure you roster Chris Evans too as he is nearing a return from his knee injury and could get a similar role if Perine were to get injured with the increased volume.

Injury: Edmonds injured his ankle in Sunday’s loss to the Raiders.

Expected Return: The exact severity and timeline are still unknown, but he should at least miss a couple of weeks.

This will perhaps be the final nail in the coffin for Edmonds’ disappointing 2022 campaign. After being hyped heading into the year, he was faded out of relevance by Raheem Mostert and then traded to Denver where he couldn’t demand any volume. Now he’s picked up an ankle injury that could end up being season-ending. This backfield will be shared by Melvin Gordon (Editor’s Note: This article was written before the news of Gordon being waived by the Broncos broke) and Latavius Murray for sure now.  Mike Boone is still an interesting hold as he’s eligible to return in Week 13.

Injury: Edwards-Helaire sprained his ankle against the Chargers.

Expected Return: He will probably end up on IR given the proficiency of the other RBs.

Edwards-Helaire had already begun to be faded out of the offense, but this injury could be exactly what Isiah Pacheco truly needed to completely take over. Jerick McKinnon gets a bump too as he will likely get the extra red zone work that Edwards-Helaire was taking. Either way, this backfield is much clearer now. Edwards-Helaire should be back at least for the playoffs.

Injury: Toney injured his hamstring in Sunday’s win over the Chargers.

Expected Return: He is currently Questionable for Week 12, and will likely miss it given the nature of hamstring injuries and his history.

Well, that was fun while it lasted. The tinge of hope that Toney was just milking his injuries to get out of New York has been smashed.

#Chiefs WR Kadarius Toney has now been declared OUT with his hamstring injury.

Justin Watson continues to prove his worth and Marquez Valdes-Scantling was surprisingly faded out. Hopefully, Toney can miss Week 12 and truly heal up and get his mind right. He is super explosive and has so much promise on this offense.

Injury: Stafford suffered a concussion in Sunday’s loss to the Saints.

Back-to-back weeks with a concussion is never a good look. Tua Tagovailoa ended up returning, so Stafford will too. But at some point, the NFL has to look into this concussion problem. In the meantime, it will be Bryce Perkins and pretty much any Ram should be faded. This is a down year for the team, and they will likely look to start retooling things for 2023 with Kupp also being hurt. There’s not much light at the end of the Rams’ tunnel.

Injury: Robinson injured his knee in Sunday’s loss to Lions and was seen in crutches after the game.

Expected Return: He will be placed on season-ending IR.

It’s never good when a promising rookie goes down. It’s especially not good when it’s season-ending. The Giants picked up their third loss of the year and now will lose their second round pick. Darius Slayton had 10 targets, Richie James had three, and Kenny Golladay earned two.

#Giants WR Wan'Dale Robinson tore his ACL and his season is over. A promising rookie year cut short.

These are the WRs the Giants and Daniel Jones will turn to. Saquon Barkley may see some extra pass game usage as well. The Giants were recently reported as being an option for Odell Beckham. The Giants sure could use him.

Injury: Warren picked up a hamstring injury in the loss to the Steelers.

As the tweet says, Najee Harris finally produced after Jaylen Warren went down. 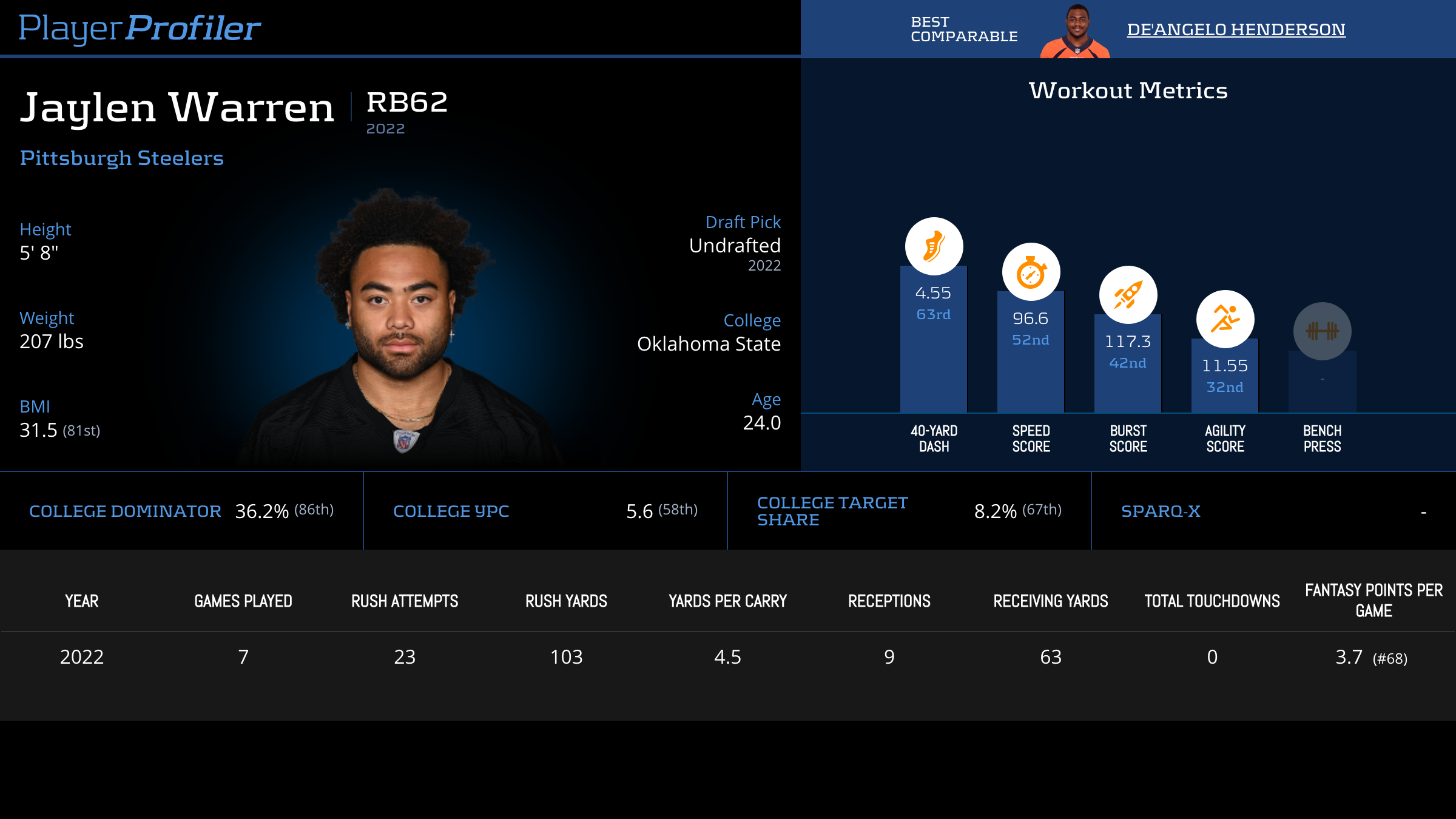 Look for that to continue if this hamstring injury lingers. Even if Warren is out there in Week 12, he probably won’t see the volume he had started to see over the last few weeks.