Undervalued Stacks for the 2021 Season 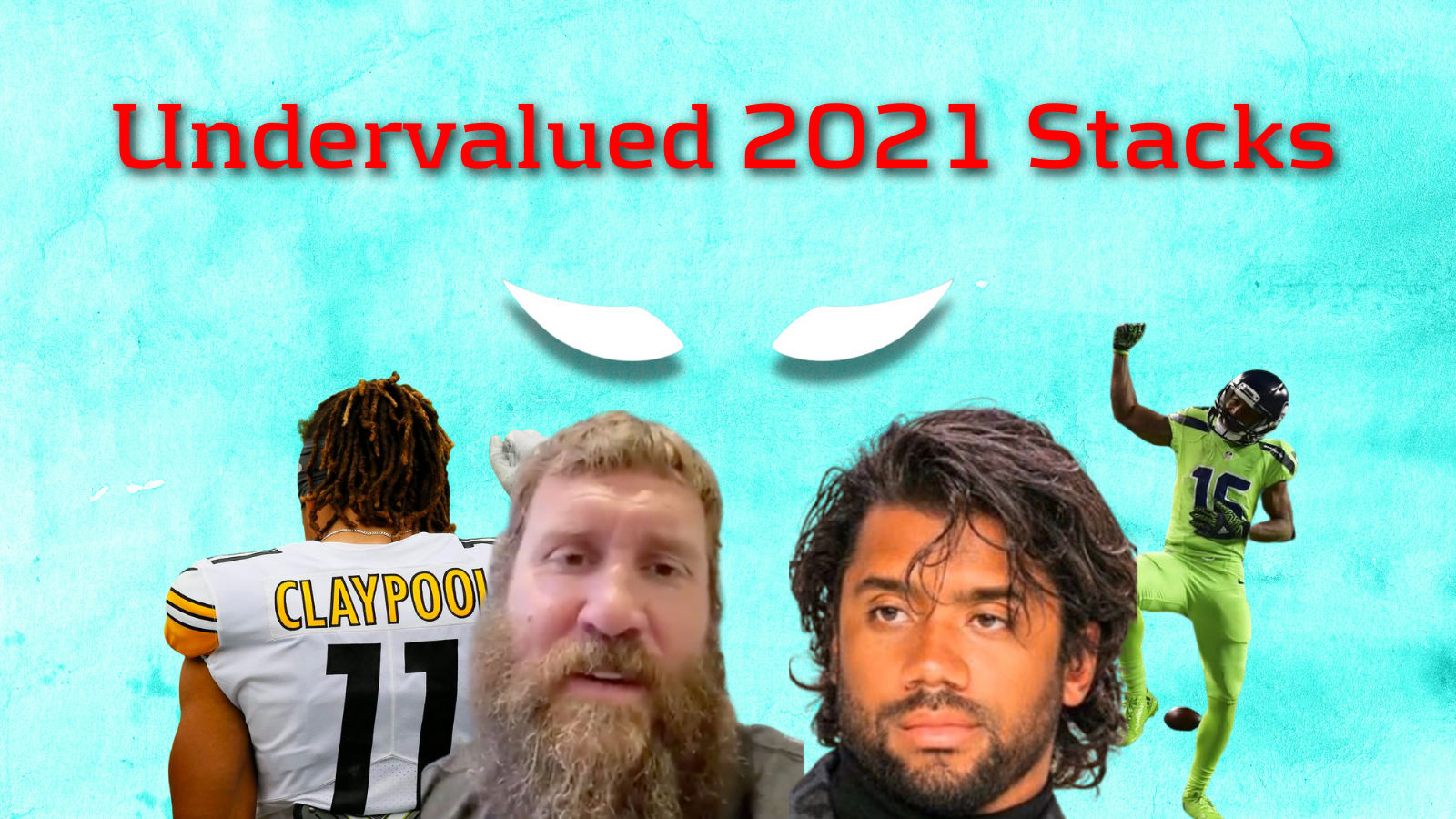 Lately, there have been several pieces published on this website regarding the value of stacking in both best ball and redraft leagues. To recap, stacking is advantageous because managers to need to get less things right in order to succeed with their stacks. And stacking takes advantage of season-long and week-to-week correlation. For example, if person A takes Josh Allen and Allen Robinson, he’s calling his shot on both the Bills and Bears offenses. Meanwhile person B, who takes Kyler Murray and DeAndre Hopkins is only calling his shot on the Cardinals offense. While all three offenses should be productive, less needs to go right for person B. Additionally, Murray and Hopkins’ spike weeks are highly correlated, and, when they hit, they singlehandedly win you your week. For a more in-depth explanation, check out the previously linked articles.

As a recently converted “truther” regarding stacks, I went looking for my favorite, less obvious stacks for this season.

One important thing regarding stacks is that their worst case scenario is worse than non-stacks. This is why I focus on stacking players in projectable, high-scoring offenses. This maximizes the chances of week-winning games, while also minimizing the risk of being stuck holding players on a faltering offense, the nightmare scenario for any stack.

One other strategy I like to employ while stacking is to target the highest-ceiling players who are both their real-life teams’ WR2 and can be drafted as your fantasy teams’ WR2. For one, boom-or-bust players provide those highly desirable, week-winning games; however, by drafting them as your WR2 you are hedged against their inevitable bust weeks. Secondly, by stacking, you are highly exposed to one offense, which is a high variance play. By stacking with a team’s WR2, you provide an avenue for your quarterback to still have decent games even if it that production isn’t going through your stacked wide receiver.

Now, here are my favorite undervalued stacks for 2021.

While football, and especially touchdowns, are especially to predict, if there’s one thing that’s certain heading into every NFL season, it’s this: Russell Wilson will be hyper efficient throwing touchdowns, and Tyler Lockett will catch a ton of them. While it’s true touchdowns totals aren’t too sticky year over year, in a league of over 1,500 players, there’s bound to be an exception to this rule, and Wilson and Lockett are that exception. Over the past four years, Wilson has finished each season in the top-3 in passing touchdowns, and over the past three years, Lockett has had 10 (No. 7), 8 (No. 8), and 10 (No. 6) total touchdowns.

If you aren’t convinced that Wilson possesses a special knack for throwing touchdowns, maybe his ninth-highest touchdown percentage of all-time will convince you. And with 4,335 attempts in his career, we can be confident that he isn’t just getting lucky. Moreover, recently, Lockett has been a red-zone target machine; he’s had 16 (No. 10) and 23 (No. 2) red zone targets over the past two years. To anyone who would still argue that touchdowns are too unpredictable to project high totals for Wilson and Lockett going forward, I say this: if it looks like a duck, swims like a duck, and quacks like a duck, then it probably is a duck.

Wilson and Lockett don’t only have a special touchdown connection, they also are perfectly fit for each others’ skillsets. 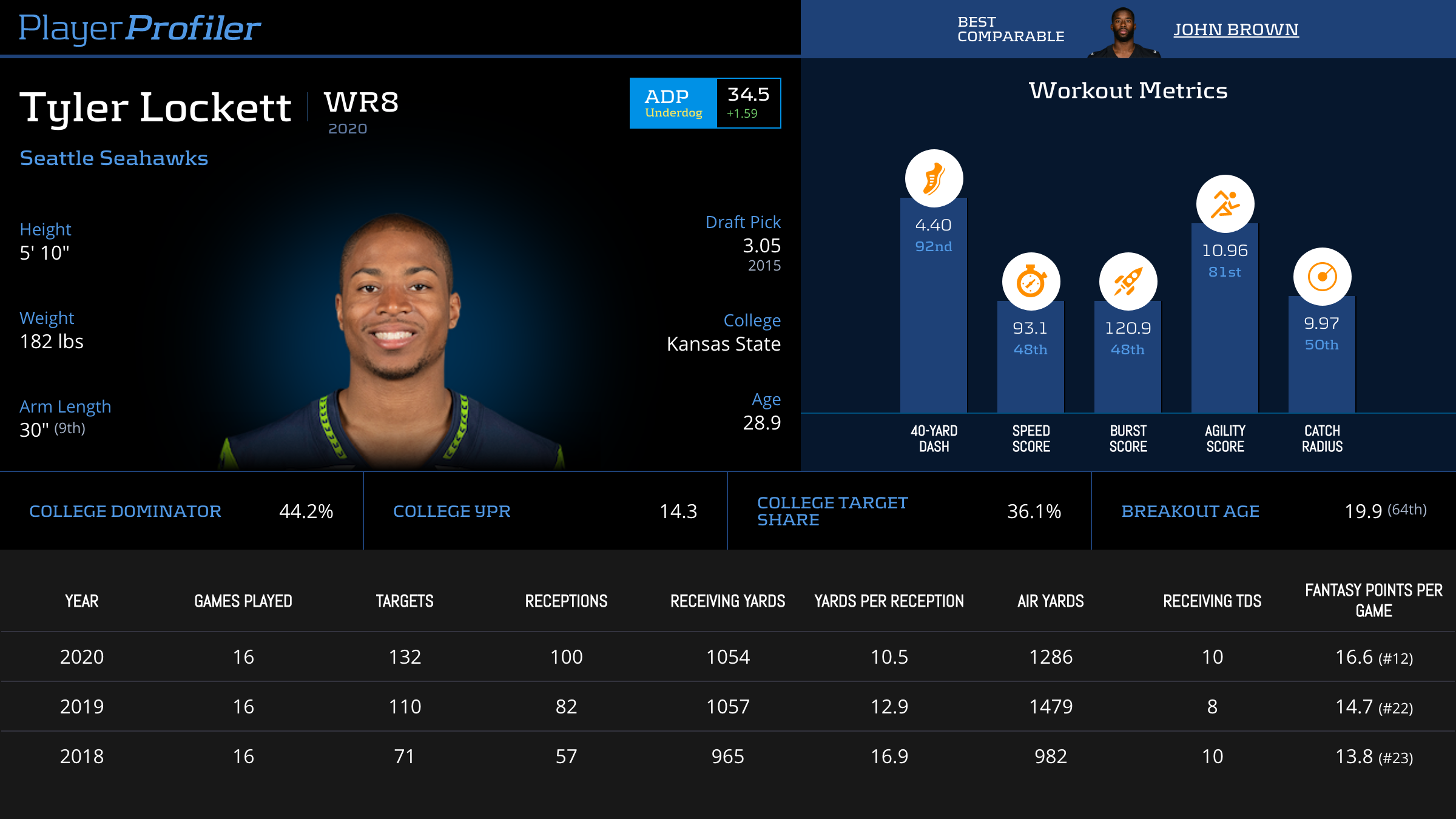 Wilson threw for 388 yards and three touchdowns while Lockett put up 15 receptions on 20 targets for 200 yards and three touchdowns. In six-point passing touchdown leagues, that was good for 91.92 (!) points, an automatic win. This wasn’t an isolated incident either, I looked back at their weekly totals and this stack would’ve likely secured you wins in four different weeks all by themselves.

Many people complain about Lockett’s week-to-week variance and how detrimental that is to a team. However, if you employ my strategy of making sure he’s your WR2 (which is feasible considering his ADP is the 3.10), you will be fine. Two sample builds that I like are Aaron Jones/Saquon Barkley/Austin Ekeler, DeAndre Hopkins/D.K. Metcalf/A.J. Brown/Justin Jefferson, and Lockett, or, alternatively, Stefon Diggs/Calvin Ridley, Jonathan Taylor/Najee Harris, and Lockett. With those WR1s, I would be comfortable in my ability to weather Lockett’s floor weeks.

Overall, Wilson and Lockett have a special connection when it comes to deep ball touchdowns. At Lockett’s price, managers can construct builds which can protect themselves from the bust weeks, while also being able to take advantage of the guaranteed wins the stack offers.

Over the past seven years, Ben Roethlisberger has passed the ball at an elite rate. Excluding his injury year in 2019, he has been on 16-game paces that would have all ranked in the top-5 in pass attempts. Accordingly, he’s also had fantastic 16-game pace passing touchdown totals, all ranking top-8, over the past few seasons. Like the Seahawks offense, this long track record of a high volume passing attack gives me confidence that we can project a high-scoring, pass-heavy offense next year, even with the addition of Najee Harris.

Also like Russell Wilson, Roethlisberger airs the ball out, but actually at a higher rate and with surprisingly similar accuracy. He’s spent the past few seasons finishing top-3 in Deep Ball Attempts, top-10 in Air Yards, and top-10 in both red zone attempts and Money Throws over the past few seasons. These metrics are why the Roethlisberger-Chase Claypool stack will be awesome this year.

Claypool has an amazing profile, and his build is about as perfect as you can get for the Steelers’ offense. 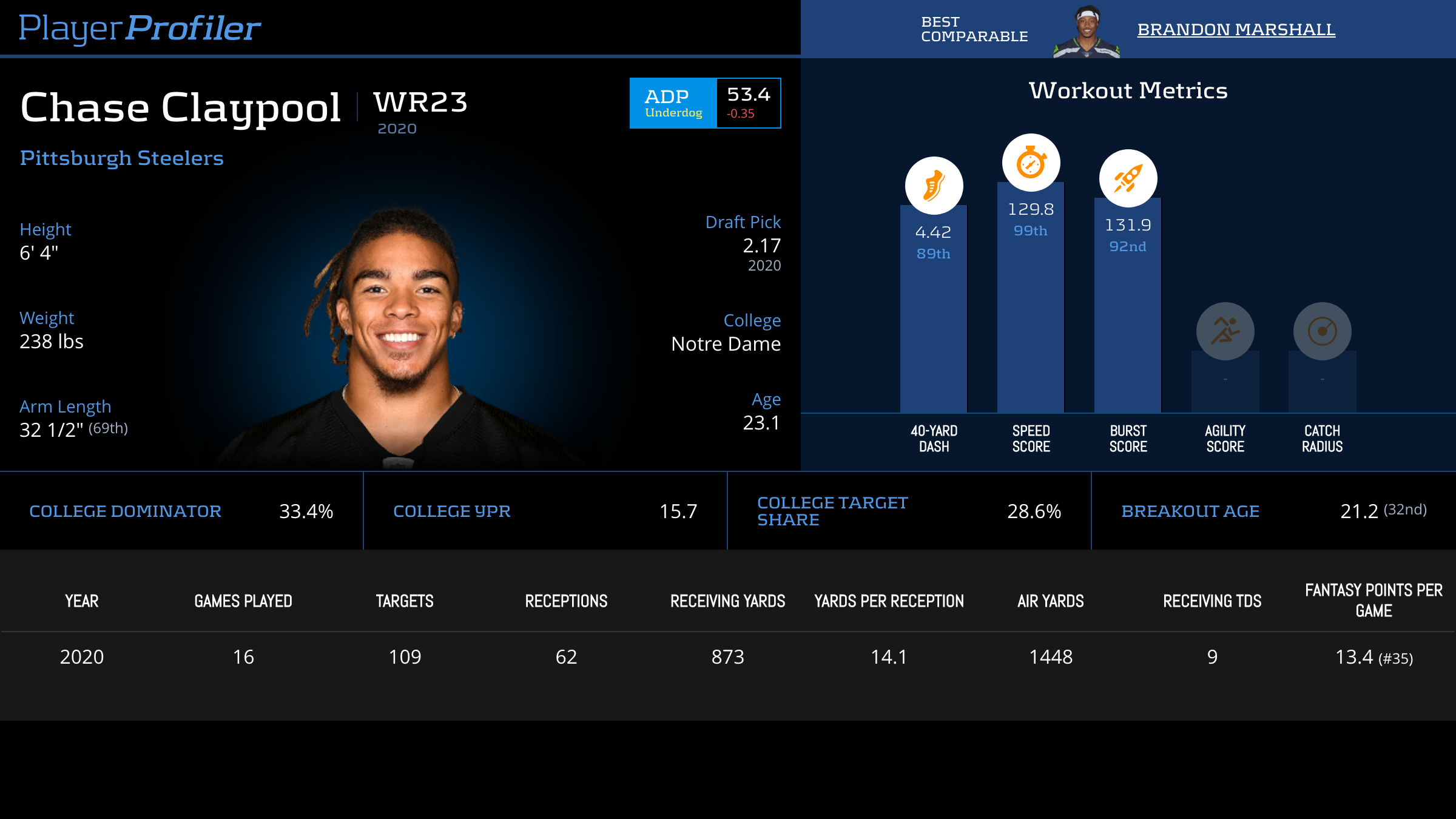 Roethlisberger already showed recognition of this fact by frequently targeting Claypool for chunk plays. The rookie had 1,448 (No. 9) Air Yards, 31 (No. 3) Deep Targets, 13 (No. 24) red zone targets, and 11 (No. 5) total touchdowns last year. These aren’t even rate-based metrics, yet he put up these elite peripherals despite playing inconsistently throughout the season because of injury and being a rookie.

Detractors of this Steelers stack might point to the fact that Roethlisberger’s high-volume passing tendencies tapered off in 2020, and that the addition of Najee Harris can change the run-pass balance of this offense.

However, there are three reasons why these things don’t matter.

First, apparently, Roethlisberger wasn’t as prepared for the 2020 season as he has was for past seasons. Moreover, he’s been reported as being especially fit and prepared coming into 2021. Second, should Claypool see the field as often as even an average wide receiver (despite not being average in any measurable way), it doesn’t matter if the Steelers run more often. Third, the argument that Harris takes production away from Claypool can be flipped on its head: by adding a talented running back, who’s to say that this offense doesn’t become more efficient, thus granting Claypool more opportunities to produce? We’ve seen direct evidence of this when Antonio Brown, JuJu Smith-Schuster, and Le’Veon Bell were all elite in 2017. As they say, a rising tide lifts all boats.

I truly believe these two stacks will be league winners in 2021, and I have been reaching to grab both in almost all formats. If you can get both of these stacks in Superflex, I can see you securing at least four wins this season, which would put you well on your way to making the playoffs, and ultimately winning the championship.