Expected Points Added (EPA): What It Is and How to Use It 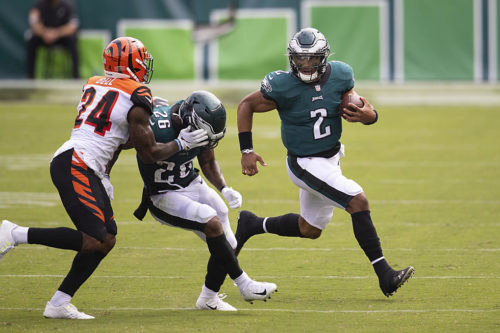 “The problem with fantasy football is fantasy points don’t win NFL games, and players don’t care about your fantasy team.”

We’ve all heard that statement more than a few times, and it’s mostly true. Technically, fantasy points don’t win NFL games, actual touchdowns and field goals do. Yes, the majority of players don’t care about your fantasy team (aside from Kenyan Drake).

Lol if you’re mad about my fantasy output the first couple of games, drop me and bless someone else in your league ???

However, at PlayerProfiler, we have added a new metric that removes fantasy points from the equation. One that focuses only on the plays that help (or hurt) teams from scoring actual NFL points.

Allow me to introduce Expected Points Added (EPA), now available on each player’s page in the Efficiency section.

EPA quantifies every NFL play and whether the offensive team is more/less likely to score after that play is over.

Example No. 1 of EPA in Action

On 1st and 10 from his own 25, quarterback Jameis Winston throws a 23-yard laser to Mike Evans. Generally, when a team has 1st and 10 at their own 25, their expected points on that drive are 0.97, which is the average points per drive for all drives at that down/distance/field position.

Example No. 2 of EPA in Action

For this next play, we’ll consider two hypothetical scenarios to better understand how actual, in-game scoring affects EPA. If Jameis Winston hits Chris Godwin on a crossing route that he takes to the house, the team has scored a touchdown. A touchdown is worth around seven points. Teams make most of their extra points, and the ones they miss are generally offset by other 2-point conversion tries. Winston and Godwin get 7 – 1.34 = 5.66 EPA added to their season totals after that play.

If Winston is intercepted and the defense takes it back for a touchdown, that’s seven points for the other team. Winston’s EPA would then be -7 – 1.34 = -8.34 EPA. A big penalty to him for his poor decision that likely costs his team the game. The team went from scoring 1.34 points to having seven points scored on them, good for an 8.34 delta.

You may wonder how well EPA correlates to actual fantasy points, and why we have added this stat to PlayerProfiler.

Correlation Between EPA and Fantasy Points

EPA generally has a strong correlation with fantasy points for QBs, WRs, and TEs. Because passing plays result in more yards per play than running plays, on average, prolific passers and pass-catchers generally have very high EPAs. Through three weeks of the season, the correlation between EPA and PPR points is: 0.63 for QBs, 0.81 for WRs, and 0.79 for TEs.

Running backs have a much weaker correlation between EPA and fantasy points, and it’s only 0.29 through three weeks of the 2020 season. Running plays in general are lower yardage than passing plays. A run on 2nd and long generally brings up 3rd and long. While a pass play on 2nd and long is much more likely to result in 3rd and short, or a 1st down.

In case you’re wondering why running backs have such a low correlation (even though they score more touchdowns than wide receivers), you have to remember that we are looking at “added” points. If a running back punches it in on 1st and goal at the 2-yard line, the expected points at that time is already around 6, so a touchdown adds little to what was already expected. Teams rarely come away with anything other than a touchdown in that field position, so the running back isn’t heavily rewarded.

EPA has been added to PlayerProfiler to help you become a more well-rounded football fan, but more importantly, to help you get better at dynasty. EPA can help you see into the eyes of a coaching staff, and how they may be making their decisions.

Take Jameis Winston, who put up an incredible fantasy season last year with 33 passing touchdowns and over 5,000 passing yards. If you were in a dynasty league and only saw his age and fantasy points, you’d be sending a first-round pick to the Winston owner trying to acquire him. However, you could look at his EPA and see that it was near league-bottom for quarterbacks in 2019. Fast-forward one year, and Winston is a backup without a clear path to future NFL playing time.

Matt Kelley talks a lot on his podcast about Jalen Hurts, and making sure you stash him. Hurts is a Konami code QB with elite speed and burst, but he’s stuck behind 2017 MVP finalist Carson Wentz.

Wentz hasn’t been great for fantasy in 2020, but he hasn’t been terrible. In Weeks 1-3, he’s recorded 15.0, 14.4, and 23.5 fantasy points. Look at his EPA though, and you’ll see that his -22.6 ranks second-lowest of all quarterbacks through three weeks, in front of only Sam Darnold. With three passing TDs, six INTs, and a paltry 5.6 yards per attempt, Wentz will need to step it up if he wants to remain the starter in Philadelphia. Utilizing EPA, we can now see that Hurts is a great dynasty stash. Not just for his rushing ability, but because the guy in front of him on the depth chart has “added” -22.6 points to his team thanks to his erratic throws and poor decision-making.

If you have any more questions about EPA, you can reach out to me on Twitter.